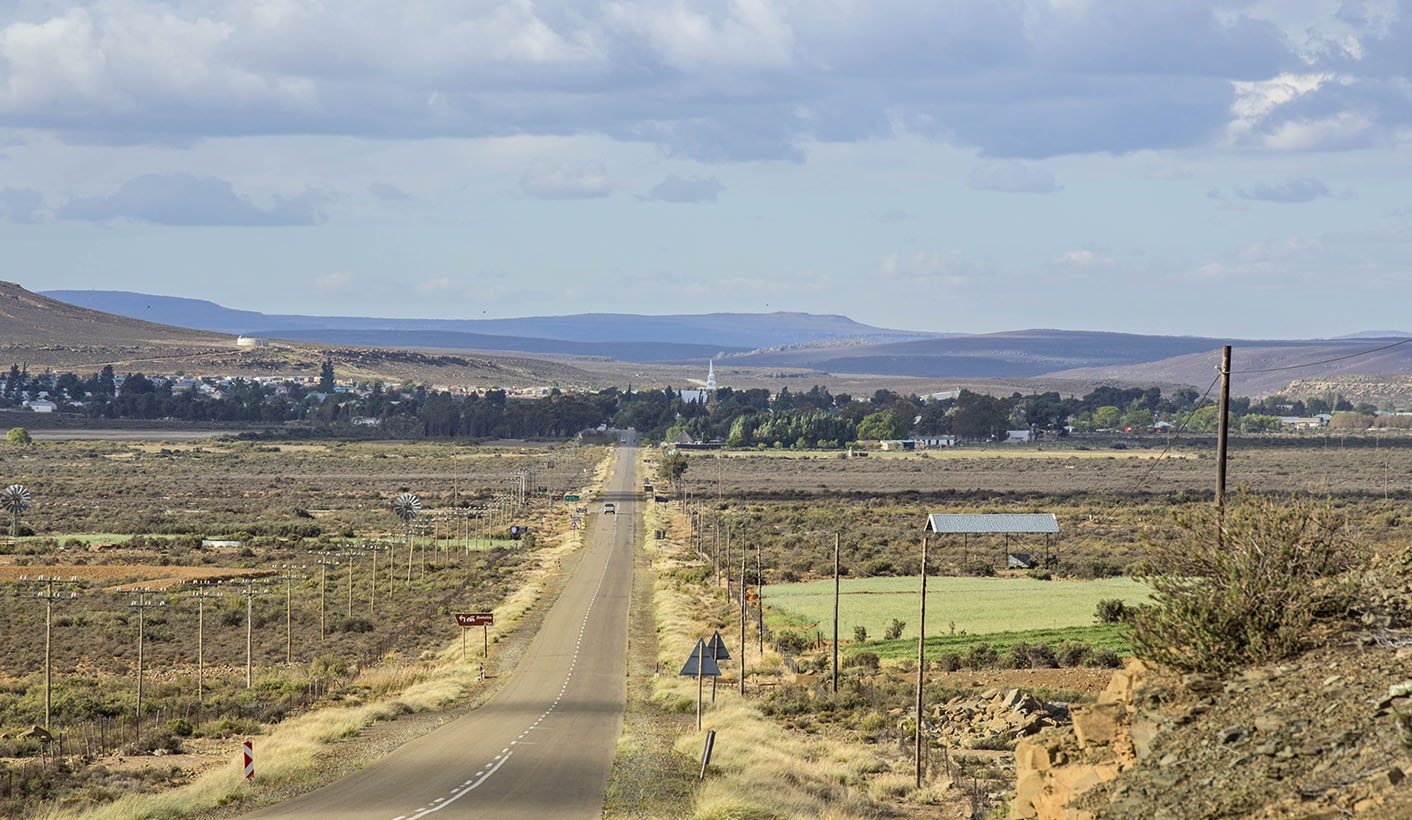 Since October 2017 the eyes of the world have been focused on the City of Cape Town as it faces the prospect of becoming the first major city in the world to run out of water. But hundreds of kilometers outside the metro limits, in and around the Tankwa Karoo, which straddles the Northern and Western Cape, water scarcity has been the so-called “new normal” for well over a year. And that’s even by the standards of the driest part of a region whose name means ‘Place of Thirst.’ By DIANA NEILLE for CHRONICLE.

The pit dug in the middle of Petra and Fourie Louw’s homestead 20km outside of Sutherland was intended for the usual flotsam of farming – vegetation, compost, bits of wood and discarded plastic. In August 2017, when winter rains had failed to fall for the second year running, the pit became a mass grave. One by one the couple and their workers threw the bodies of their starved sheep and goats into the shallow trench. Ten carcasses. Twenty. One hundred dead animals: some killed by poisonous plants they wouldn’t touch if there was anything else green to graze on in the vast Karoo plains. Others had been too weak to properly adjust to the emergency diet of corn the Louw’s had been buying every week for almost a year; more recently on credit. By January, more than 220 sheep and goats – roughly 10% of their entire flock – filled the pit.

For hundreds of years, underground water storage systems, or aquifers, have made living and farming sheep and goats in this wild, arid landscape not only feasible, but lucrative. The Karoo provides South Africa with a third of its red meat requirements and the world with a sought after luxury food brand: Karoo Lamb. It also reportedly produces 13-million kilograms of South Africa’s annual 44-million-kilogram haul of wool, and the majority of the world’s mohair.

But recently farmers have been sinking their wind pumps ever deeper to find water, risking land subsidence (the collapse of the land’s surface from too much subterranean activity). Reports of farmers losing entire flocks of domestic animals and prized game to starvation have become increasingly common. In some cases, those losses have pushed local farmers to suicide.

By anyone in Sutherland’s account, the Louws had done everything right. Over the period of 14 years, the young couple had invested in solar panels and a ground water irrigation system for their fields of lush lucerne. Fourie became known as “Jakkals”, the vanquisher-on-call of jackals terrorising the local stock. He and Petra built wifi-enabled accommodation on the farm for five of their permanent workers and their families and helped them buy houses and establish flocks of their own. They started a lucrative meat co-operative, buying lambs from the local farmers to slaughter, transport and sell to butcheries in the Western Cape.

Their entrepreneurial spirit proved fruitful. They took out a loan on a fleet of trucks to transport the record 10,000 animals they slaughtered and sold in 2016. They worked hard. They built themselves up. Everybody benefited.

But it didn’t last. Within a year their lamb count dropped by more than a third to 3,000 and their dorpers started dying. The dam just outside Sutherland that replenishes the local aquifer, ironically named Dankbaar Dam (Thankful Dam), started to resemble more of a reservoir.

This prolonged drought – the most severe in recent South African history – has made the only life these third-generation sheep farmers have ever known highly uncertain at best, impossible at worst. The last rainfall of any magnitude the Louws recorded on their farm fell in May 2016. Since then they estimate that 20 to 30% of the hardy natural vegetation their flocks normally graze on hasn’t just dried out. It has died altogether.

“During a drought, you don’t really have a choice what you feed your animals,” said Fourie Louw. “When it’s this dry, (there’s only) an occasional green plant you see in the wild, and is probably poisonous.”

Many farmers in the area made the decision to slaughter or sell their ewes in early 2017, Louw says, because mother sheep that don’t eat well don’t produce the lambs that contribute to annual economic injections of at least R15.5-million in this region of the Karoo alone. They just become more hungry mouths that need feeding.

The rest of the Louw’s flock has been living on a diet of maize for well over a year: an expensive and unsustainable practice. The couple doesn’t dare take the odd rain shower as a hopeful sign and stop the regimen: the starving animals wouldn’t give the new vegetation enough of a chance to grow back before decimating it again; and they wouldn’t be able to go back on a diet of maize once they’d been taken off it, even for a few days. Rain today does not equal food tomorrow.

The lack of lambs means the Louw’s often sit idle. The couple have kept the business going to honour their commitment to the community and try to help their neighbours earn some income. But it’s got to the point that the diesel can’t be bought and the monthly loan installments on their fleet can’t be paid. It’s only a matter of time until the bank comes knocking, Petra says. Most distressingly, they’ll no longer be able to afford to pay their staff.

“It’s particularly hard for the workers,” said Fourie. “We’ve come a long way together only to let them go – and they’ve got kids. They’ve got families, they’ve got children in school.

“They’re people who want to work hard. They get up at 3am. It doesn’t matter what time you call them, they’re ready to work. So to let such a calibre of people go is very difficult,” he said.

For months, they and farmers in small towns across the Karoo have relied heavily on aid administered by Gift of the Givers, the continent’s largest disaster relief organisation, which has been involved in drought relief throughout South Africa since October 2015. Between August and December 2017 volunteers headed up by Somerset West resident, Elna Visagie, sent truck and later train-loads of donated fodder, potatoes and even dried cotton – more than R40 million-worth – to struggling farmers across the Northern, Eastern and Western Cape. Visagie also set up a school feeding scheme for more than 1000 children.

Fourie Louw is effusive, embarrassed even, about the generosity of those donating and admits he doesn’t know where they’d be without it. But it’s not enough.

“We’re getting drought relief from people who are collecting for the farming community – 10 sacks of food here, 20 there,” he said. “I need 300 sacks of maize a month.”

With its four-million residents and thousands of international visitors to safeguard, the City of Cape Town is undoubtedly the Western Cape government’s top priority in the scramble to prepare for Day Zero – the day taps across the city run dry – and its potentially horrifying ramifications. Towns like Knysna and Kannaland are also teetering on the edge of total outages, as are large swathes of the Eastern Cape.

Regardless, the region Sutherland and many other small but productive towns form part of has been the hardest hit in the Western and Northern Cape by far; and communities have been living with water outages for months. CEO of Agri Western Cape, Carl Opperman, described the visible effects on the region as “devastating”.

Photo: The Tankwa Karoo from the air. Photo by Diana Neille

In November, residents of Beaufort West spent two weeks relying on boreholes and reused sewage water before Gift of the Givers bailed them out with 1.2-million litres a day from a local aquifer. The sheep farming town has been a lot more stable ever since.

Like wine, olive oil and many other economically beneficial produce grown in the Western Cape and the southern Karoo, lamb is considered a luxury item. Meat production is also a very water intensive industry. As the drought advances towards “Day Zero” urban dwellers are becoming increasingly hostile towards farmers they perceive to be hogging the water supply, particularly towards those whose outputs aren’t staples.

Earlier in January Cape Town Mayor, Patricia de Lille, held a press conference insisting the region has “reached a point of no return,” and threatening residents that if they do not reduce their usage to 50-litres per person per day, Day Zero could happen as soon as mid-April. February will see Level 6B water restrictions implemented and, when the city turns off the taps, residents will be forced to queue at collection points for water.

Residents who have diligently cut down on their water usage but seen little to no change in remaining supply in the diminishing dams the city relies on fully for water are beginning to question if it isn’t as a result of unfair allocations to farms. But City officials say agricultural usage has been appropriately restricted and carefully monitored.

“The restrictions that have been imposed in the Western Cape are 45% of the urban area and 60% on the agricultural sector, said the director for Water and Sanitation in the City of Cape Town, Peter Flower. “This means that (agriculture) can only use 40% of their allocated water, and the national department is monitoring this very carefully and cutting off water to those agriculture user organisations when they reach that allocation,” he said.

For Fourie and Petra Louw, who don’t even rely on municipal dam water and whose farm falls within the borders of the Northern Cape, the growing resentment towards farmers from residents of the Western Cape is an added layer of anxiety. Right now, they need all the support they can get.

“These days we have to worry about what happens at the end of the month,” said Petra Louw. “Do you have money to pay that bill? Because of the drought, we’re living on credit now. We have to go in (to the store) once a month and settle our debt. Where before we didn’t think twice about buying something from the store, now you really have to consider if you need it or not – can we get by without it?” DM

To donate to Gift of the Givers and the farmers hardest hit by the drought, click

Photo: The town of Sutherland in the Karoo. Photo: Diana Neille