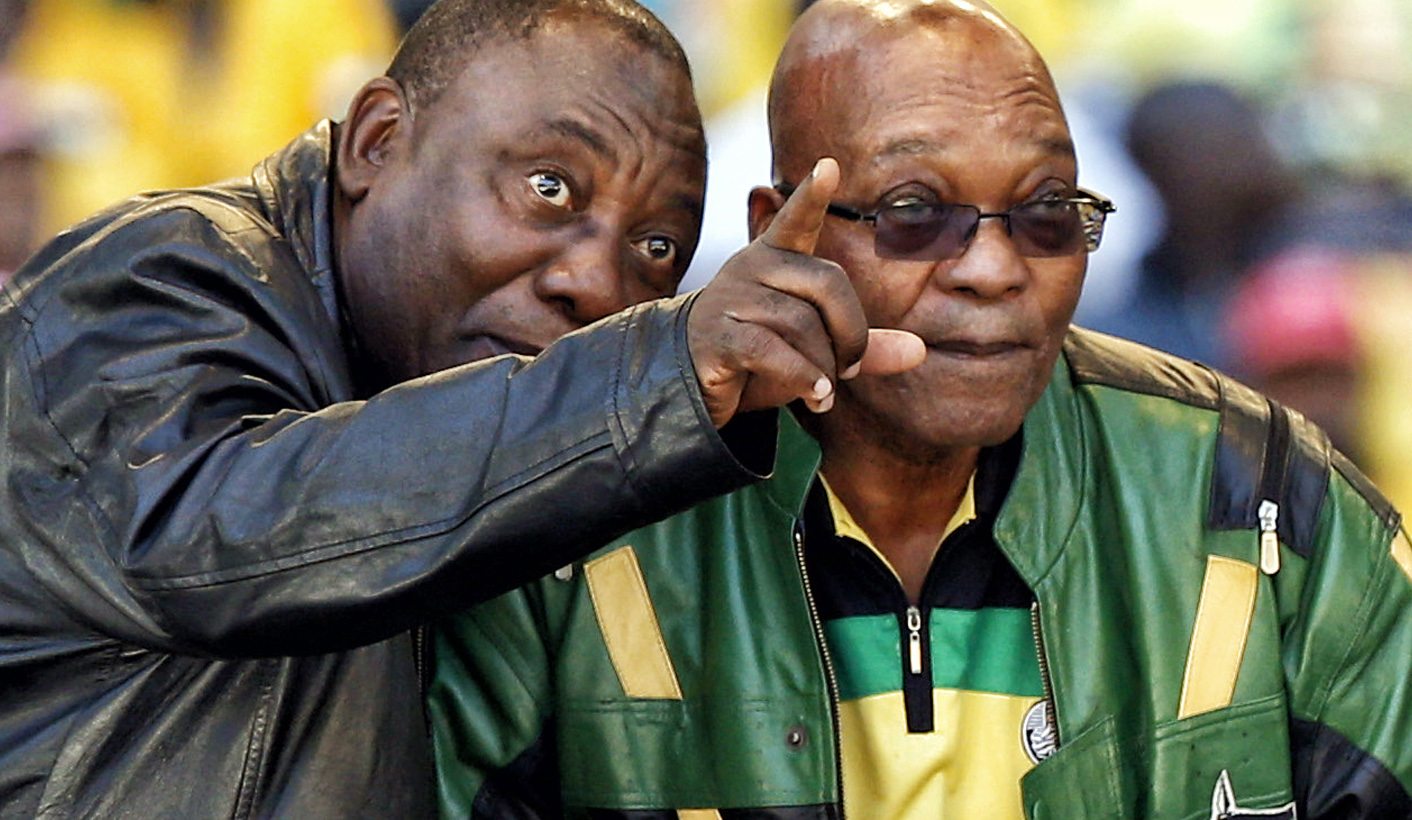 While there are many questions currently facing our politics, and our politicians, perhaps the most urgent is the question of who will give the State of the Nation Address next Thursday evening. There is intense speculation that Jacob Zuma will be removed as the country’s president before then, while several of his allies are mounting a very public fightback campaign that would achieve the opposite. At the same time, there is a now strong expectation from much of urban society that the Zuma era is over, and that he would go soon. If these hopes were dashed, that could have a significant impact on the country’s recovery and the results of the 2019 elections. By STEPHEN GROOTES.

It seems impossible to know what is actually going to happen before the State of the Nation Address (SONA) in Parliament on Thursday 8 February. The reason for this is that it seems unlikely that Zuma will be recalled or removed through a vote of the ANC’s national executive committee. The only reason he would resign is if some deal were struck between himself and new ANC leader and SA Deputy President Cyril Ramaphosa. The nature of these things is that any negotiations will happen in secret, and we will not hear the details of them. All we know is that Ramaphosa and Zuma are meeting regularly to discuss “governance issues”. This then creates a news vacuum, with very little data on which to base any predictions. That said, there are several things that could be said, depending on who will emerge as the SONA speech giver.

First, if Ramaphosa were to be able to remove Zuma before the speech, it seems likely that he would take over immediately. There seems to be no bar to him doing so, and no “neutral” candidate, in the mould of a Kgalema Motlanthe, seems to be available. And so dire are so many of our problems (often aggravated through misgovernance) that he may feel the need simply to get cracking now.

For Ramaphosa to deliver this address would be the final sign that he has now actually taken over, that political power rests with him, and that he is the person clearly in charge of both the country and of the ANC. The political effects of this would be profound. It would surely put Zuma’s supporters in the ANC on the back foot. People like Secretary-General Ace Magashule and Deputy Secretary-General Jessie Duarte – who currently say in public that Zuma must go nowhere – would be badly wounded, perhaps mortally. Magashule would suddenly have a political opponent with power over the Hawks and the National Prosecuting Authority. He would find that an uncomfortable position. Duarte, and others, would simply have no choice but to accept that things have changed.

But the biggest changes would probably be in government. If Ramaphosa were to assume the Presidency it would follow almost automatically that there would also be a new Cabinet. The list of people Ramaphosa would have to remove, in no particular order, is at least as long as this: Mosebenzi Zwane, Lynne Brown, Nomvula Mokonyane, David Mahlobo, Bongani Bongo, Bathabile Dlamini, Faith Muthambi, Lindiwe Zulu and Des van Rooyen (yes really, he’s still a Cabinet minister), and more, many more. This would have a huge impact on actual governance. The Mining Charter would surely be thrown in the shredder; the social grants mess would be tackled with a sense or urgency, and, dare we say, competence; Cape Town might have a fighting chance at avoiding Day Zero, the intelligence services would leave Zuma’s grasp and the nuclear deal would have a very short half-life.

However, a question mark could still hang over Malusi Gigaba at the Finance Ministry. He has tried to steer a path between the two factions, and would be just days away from delivering a Budget speech. This could go several ways. Ramaphosa may feel it makes sense for him to deliver the speech and simply back it all the way, or for someone with more legitimacy (and who didn’t oversee the appointment of Gupta allies to parastatal boards) to do the talking.

Taken together, all of this would provide a strong launchpad for the ANC’s 2019 election campaign. It would be a comprehensive break with the Zuma-past, and allow the party to put clear blue water between itself and people such as the Guptas. This would surely have an impact on the final result of that election.

However, the implications if Zuma gives the speech next week are also stark.

For a start, it would show that he still has significant power, and can still thwart Ramaphosa, who himself could be accused of being all spin and no substance. This would weaken Ramaphosa within the ANC, and lead to further bids to frustrate him. You could imagine the shot in the arm it would give Magashule and Duarte, and many others, if Zuma were to retain state power. This could have a great impact on the balance of power in the NEC; those who have followed Zuma up until now could well continue to support him. Without state power, it would be hard for Ramaphosa to enforce his will, with that non-change in the party which badly needs reinvention.

This has huge implications for governance; the current (mis)governance in many areas might just continue. Dlamini will refuse to answer questions over social grants, Mahlobo may try to achieve fission, Zwane will play merry havoc with the mining sector. But it also seems likely that nothing else will happen, in that it is unlikely that Zuma would be able to actually carry out a reshuffle, which means Gigaba probably stays at the Treasury. And of course he would retain control of the intelligence agencies.

In the meantime two other significant things could happen. First, Zuma would still be capable of shock announcements similar to that of free higher education. These shocks would probably be damaging to the country. Second, a lot more paper would be burnt and emails deleted, in a final bid to cover the tracks of those accused of wrongdoing.

The damage to the ANC would be huge. Polling data shows that Zuma’s approval rating is low, which would indicate that the longer he stays in power, the worse the ANC will do in the 2019 elections. He is already responsible for helping it to lose several major metros. This damage would surely continue.

But the real problem would be the confusing signals that would be sent out about who is really in power. It would be impossible to plan, to make decisions that involve investing money and expecting a return over 10 or 20 years. Imagine Ramaphosa saying that the Mining Charter would be torn up while Zuma said it would stay. Would you spend a billion dollars digging up the ground on that basis?

This would also reveal the real problem that the ANC faces. The dynamics in the party were such that many people predicted a split in the ANC in 2017. Those trends have not gone away. The fact that a leadership election was held doesn’t magically stop them. Considering that people in the ANC’s top leadership have such different interests, this tension is going to be constantly in danger of boiling over.

It is clear that the stakes for everyone are incredibly high. Everyone has much to lose from what could happen next. Some could lose their newly won power, others perhaps even their freedom. This means that whatever negotiation is going on behind the scenes is likely to be intense and fraught. And that makes it hard to predict when they will end, and what their conclusion will be. DM