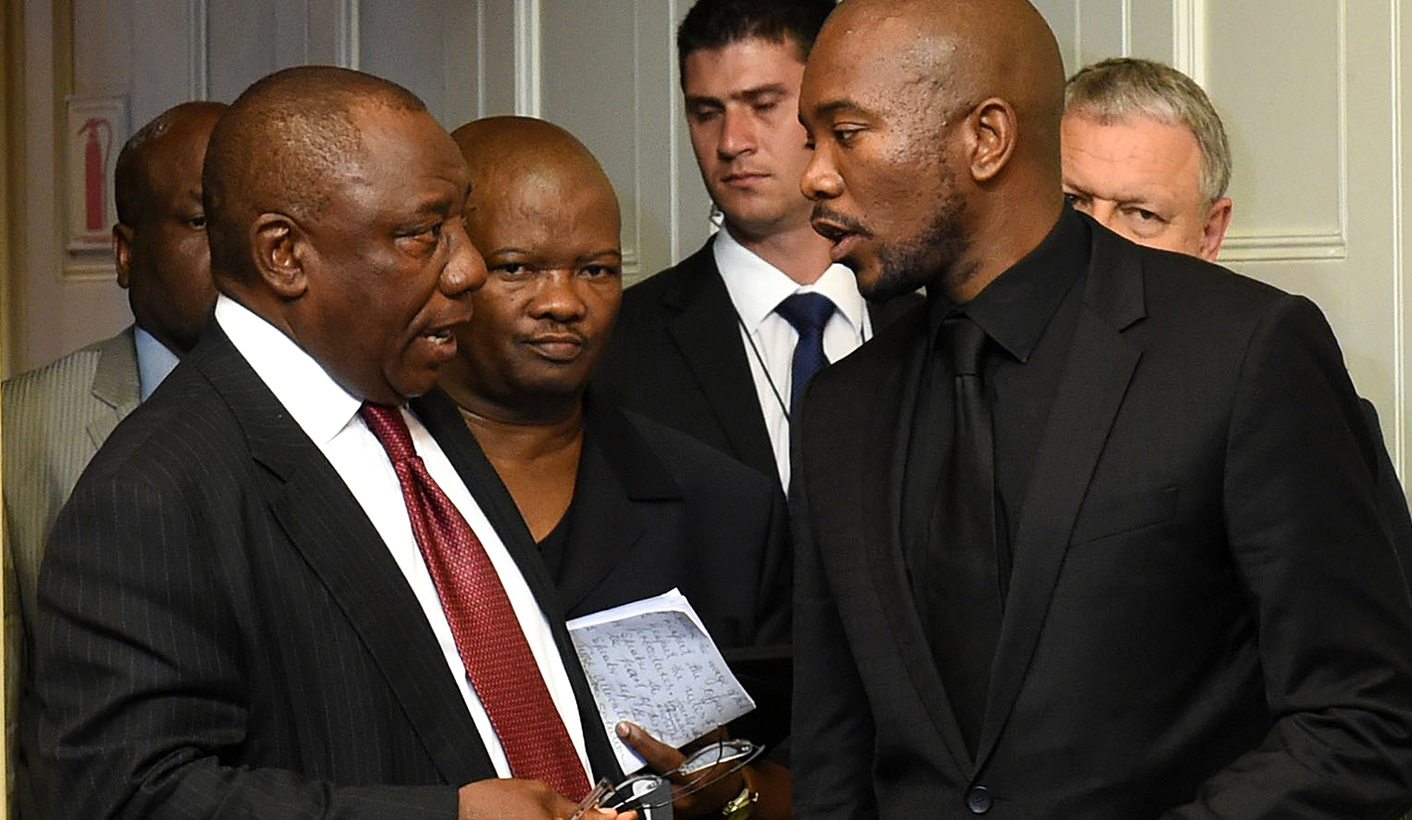 The cumulative effect of years of festering corruption, theft and mismanagement, both in the public and private sectors, have begun to manifest all round us. There is the water crisis, not only in the Western Cape but also other parts of the country, the horrific Life Esidimeni deaths, rail infrastructure that is either non existent or life-threatening to commuters, SoEs such as Eskom that have been so corrupted they threaten the security and well-being of the country. The only way to avoid dropping off the precipice into the abyss of a failed state is for South Africans in future to begin to co-operate across political, class and religious divides. By MARIANNE THAMM.

There can be few true believers left thinking that the project of State Capture is a figment of some fevered imagination or that it was all about Radical Economic Transformation.

South Africa (and the ANC), under the leadership of President Jacob Zuma, has been turned into a gargantuan Potemkin village, a fake edifice masking a rotten core.

The Potemkin village, in political terms, is a construction aimed at deceiving the eye – a Trompe-l’oeil – to hide a situation that is worse than it appears. The original Potemkin Village appears in a tale about Russian Minister Grigory Potemkin, who built fake villages along the banks of the Dnieper river to fool the Russian Empress Catherine, his lover.

South Africans have known, or at least had been warned, for at least a decade that corruption was reaching an industrial scale and, if not arrested and allowed to continue, would reach a point where there would be nothing left to steal.

At present it feels as if all the trickles, tributaries and streams of petty and large corruption that has for years siphoned off public funds, aided and abetted by the private sector, has suddenly grown into a raging torrent.

The gaping financial hole and the fractured relationships – the debris of the Zuma years – as well as an ethos of self-enrichment that it has nurtured across the board, is going to take years of focused and dedicated co-operation to repair.

ANC President Cyril Ramaphosa, in an interview with Bloomberg TV at the World Economic Forum in Davos last week, said it took “quite a bit of time for all of us to realise that this was a network which was well thought-out, which resulted in the capturing of the state.”

It was only when the #GuptaLeaks began to be published across media platforms that “we realised that it was far more serious than what we had hoped”, said Ramaphosa.

The situation is dire and Ramaphosa’s surprisingly swift action since his election in December has brought with it a glimmer of hope for a possible national renewal and the retrieval of a dream long lost in the mists of an earlier post-apartheid era.

Cyril Ramaphosa was Nelson Mandela’s choice. He comes with the institutional memory and the cachet of the vision, as naive or corny as it might have seemed, that arrived with the dawn of democracy in South Africa. It lingers in his presence.

In Davos, Ramaphosa promised that the “wheels of change” were moving and that they would speed up as “it’s an imperative that we should clean up South Africa and rid our country of corruption because that is what is holding us back from reaching higher levels of growth and our people are clamouring for a clean government and that is what we are going to give them”.

Addressing the NEDLAC Labour School in Pretoria on Tuesday, Ramaphosa continued the theme of “national interest”, the “common good” and the rebuilding of strong partnerships as set out in his 8 January address.

In that statement, said Ramaphosa, he had noted that the party could only succeed in reigniting economic growth and creating employment “if we forge a strong social compact between government, labour, business and communities. It is only through building partnerships that we can make the South African economy work for all its people.”

There it is again, “all its people”.

But Ramaphosa knows that the time for the sweet “rainbow-ism” of Nelson Mandela is over and that this new vision has to be anchored in an economy that benefits the majority.

“We must convince those who have not yet understood that we cannot grow and sustain an economy that excludes black people, the majority of whom are African and female. Radical social and economic transformation is about creating a South Africa where all its citizens, black and white, share equitably in the country’s economy.”

And again, “all its citizens, black and white”.

South Africa, said Ramaphosa, could not meet the challenges of poverty, unemployment and inequality, if “we do not rid our nation of the cancer of corporate greed and corruption. Nor can they be addressed if we do not work together on an urgent programme of economic recovery, growth and transformation”.

While Ramaphosa and the ANC most certainly have their eye on 2019, there is a sincere understanding and desire for a new consensus and compact in which people put aside political differences to engage in the mammoth task of urgent renewal.

Those who have fed heartily at the public purse will be brought to book. There will be arrests and there will be many who will lose their jobs or do jail time.

The Zuma years have been torrid and have inadvertently united many, including unions, civil society, ANC stalwarts and ordinary citizens. Opposition parties have played a valiant and vital role in defending democracy and the Constitution against the predatory class that has been allowed to thrive.

Perhaps, as a Ramaphosa presidency becomes more of a reality, opposition parties too can begin to recalibrate their role for a renewed and real sense of reconstruction and development that is in the national interest and which embraces a common vision.

The Potemkin Village has fallen. The time is ripe. DM