Life Esidimeni: The ‘missing’ victims – could the toll be 200? 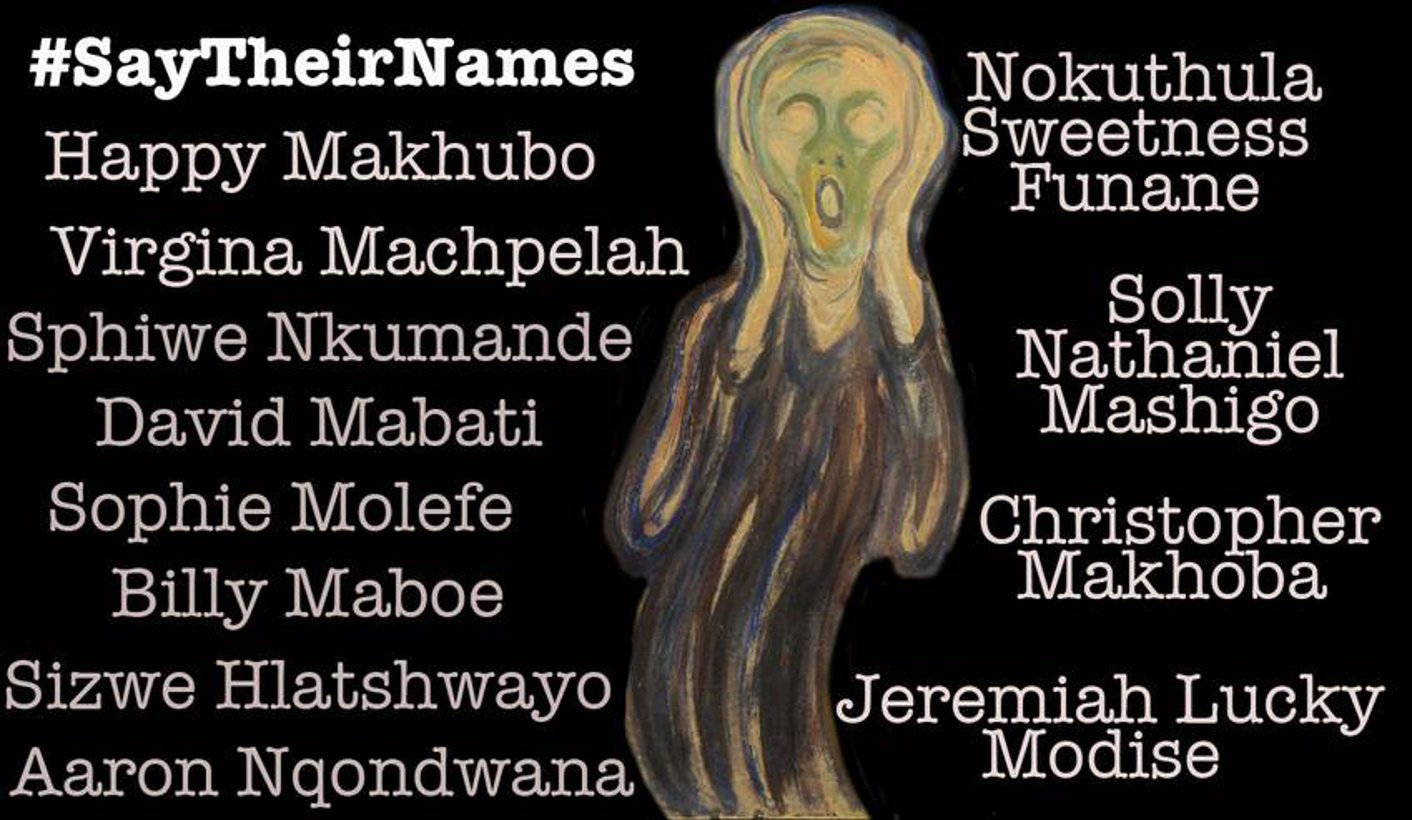 A reported 62 patients are unaccounted for after being moved from Life Esidimeni. The Gauteng health department lists them as numbers on a page. By GREG NICOLSON.

Does Umvelo Khumalo like to laugh? He was born in 1983. Did he smile for photos as a boy, or was he that awkward kid, with a half-smile, half-grimace? Was he fearless and loved playing soccer in the street? Or he was shy and preferred staying indoors? I bet he still likes the smell after it rains.

The page doesn’t tell us. All it says is he was born in May, 1983. At some point he was a patient at Life Esidimeni. Now he’s missing.

Khumalo is one of 62 psychiatric patients the government moved out of Life Esidimeni in 2016 who are now missing, or unaccounted for – it depends who you ask. Around 1,700 patients were moved during the Gauteng Mental Health Marathon Project; 144 died, mostly in unsuitable NGOs, due to lack of care.

The Life Esidimeni arbitration began in October 2017 to help relatives of the dead find truth and reconciliation, and award them compensation, but more than 18 months after the patients were moved, and the survivors moved back to safe facilities, we still don’t know where these 62 patients are – which means the death toll could be much higher.

Acting Gauteng mental health care directorate head Dr Kobie Marais’s assistant Ramaboea Semetji last week sent an email stating: “Morning NGOs Managers, Please check this list of 62 not located Life Esidimeni Patients in your NGOs facilities and respond to us if any of them is receiving care from any of your facility.”

Most of the 62 listed patients had no relatives mentioned. None of them had a “last known facility” listed. Around half had ID numbers. One didn’t have a first name. One didn’t have a second name. There were two with no names at all. “Female No 1,” one patient was called.

Relatives at the Life Esidimeni arbitration have testified on the humanity of the patients who have died. Khumalo could have liked to dance. Maybe he didn’t. Could he walk, speak, did he enjoy sweets or have a hobby? All the patients were under the care of government but Khumalo and the missing 62 are just missing numbers in the department’s list. He is patient MA1479.

Whoever his family are or were, we can’t say, and why they haven’t or can’t come forward, we don’t know. But no one has claimed Khumalo or the 61 other missing patients and one can only hope he has not ended up at an NGO where patients died of hunger or were raped, or has been discharged to the streets, or lies dead in a mortuary like so many other bodies from Life Esidimeni. One only hopes his relatives come forward.

The DA’s Jack Bloom went to file missing persons reports on Monday at the Johannesburg Central Police Station for the 62 patients. Each case had to be filled out individually and he managed to file 25 during the day. “It’s quite a thing. This person is a real person, has been born, lived. What happened to them?” he asked after filling in the forms.

Before going into the police station, he said, “I really don’t think that many are still alive. That takes the Esidimeni toll to about 200. The nightmare is not over.”

Semetji confirmed to Daily Maverick he sent the email asking NGOs to look for the missing patients and at least some NGOs where patients are still being treated received the email. But Gauteng government spokesperson Thabo Masebe said no patients were “missing”.

“It’s just people creating confusion here. There are no missing patients,” he said on Monday. He explained that some of the 1,700 patients moved from Life Esidimeni were discharged to their relatives, others to government hospitals or NGOs. He said Premier David Makhura and Health Minister Aaron Motsoaledi visited the NGOs and hospitals and government accounted for all of those discharged from Life Esidimeni to those facilities.

Makhura and Motsoaledi called on the department also to account for patients discharged to their families and referred to the testimony of national health director general Malebona Precious Matsoso at the arbitration, who in 2017 said 59 patients could not be traced. Masebe said those missing 59, which he conflated with the missing 62, had been discharged to relatives but could not be traced because of the chaos of the project.

He explained the need to track down the patients. “We remained concerned about their well-being because they were discharged patients,” said Masebe.

But when she appeared at the arbitration, Matsoso was clear that she did not know whether the patients unaccounted for, 59 at the time, had been sent home or to NGOs. “Three-hundred-and-thirty-five of the Life Esidimeni patients were discharged directly to their homes. And there are also still 59 patients who were discharged but have not been traced,” she said.

“Of part of which category were they?” asked Moseneke of the 59.

“They were part of 1,712,” Matsoso answered, which suggested she did not know whether they were sent home or to NGOs.

Adamant that the patients unaccounted for had been discharged to their families, Masebe said the Gauteng health department should not have sent the list to NGOs. “They should not have done that,” he said. Acting Gauteng head of mental health Dr Marais did not respond to requests for comment.

But until each patient is accounted for, we won’t know. Such is the confusion of the Life Esidimeni massacre. We still don’t know how some patients died and where others are. Khumalo could be receiving loving care or have died or disappeared long ago. We just don’t know.