Analysis: Team SA had to work double-time and hit the right notes to capture world’s attention at Davos 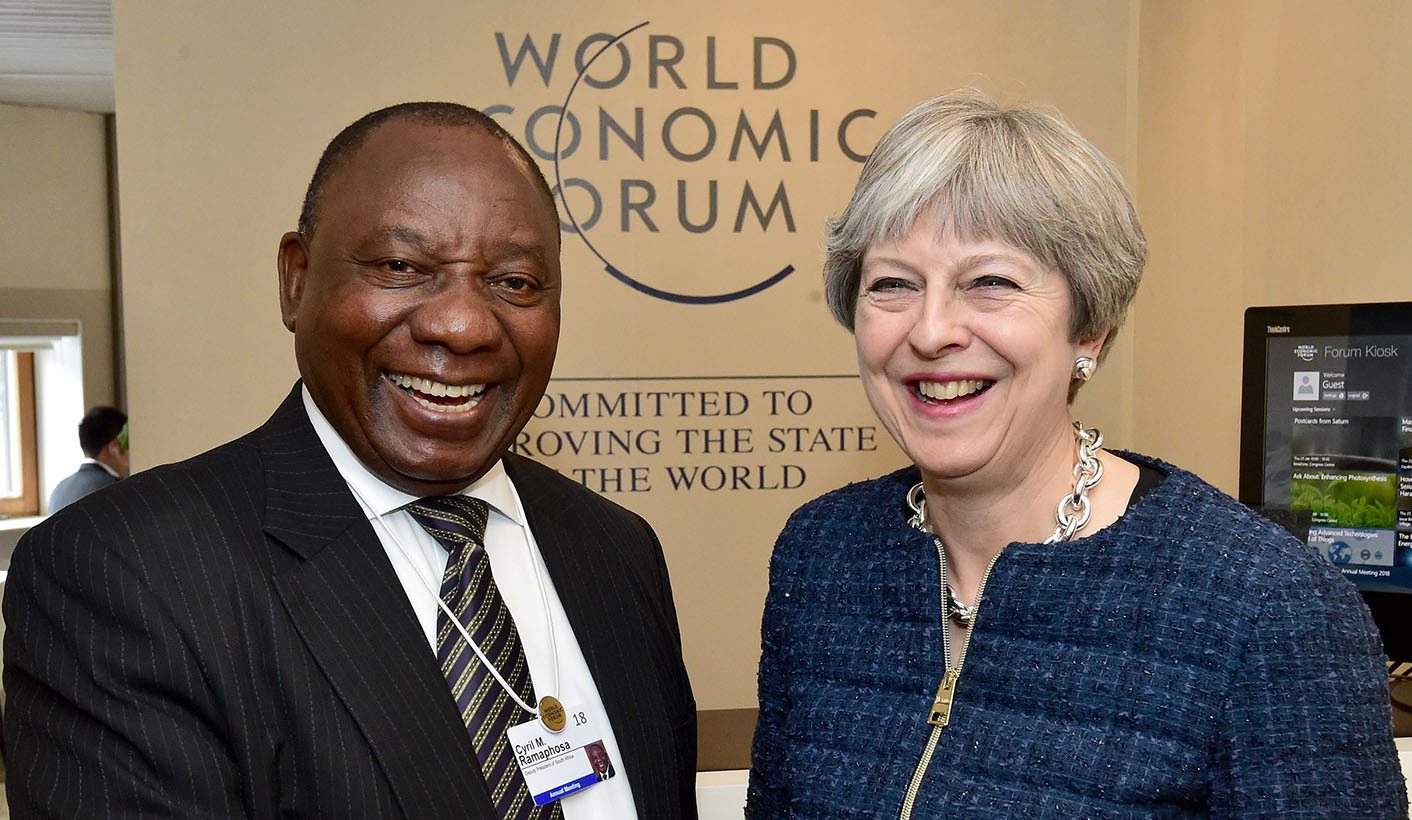 Team South Africa has returned from the World Economic Forum at Davos triumphantly, claiming renewed investor confidence and interest in a country soon to be helmed by Cyril Ramaphosa. But the reality is that South Africa is no longer the special case it once was. At Davos, the country was competing for business not just with other African nations trumpeting newly confident leadership, but also the rest of the world. By REBECCA DAVIS.

If the interview CNN’s Christiane Amanpour carried out with Cyril Ramaphosa last week at Davos can be taken as representative of the world’s current concerns about South Africa, they are: 1. corruption; 2. President Jacob Zuma, and 3. the Cape water crisis.

These are the issues to which Amanpour devoted most of her time on the line with Ramaphosa, who delivered the perfect investor-friendly responses to each. Those involved in corruption and State Capture will be “sent to jail”. The ANC is actively looking at an exit plan for Zuma. And as soon as he returned from Davos, Ramaphosa planned to “corral as many people as possible” to “bring water to the people of Cape Town without any fail”.

At Davos, Ramaphosa appeared to be a hit, saying the right things in the right places to the right people. He poured cold water on the idea of an expansion of nuclear power for South Africa. He blamed corruption and the shambolic condition of the country’s state-owned entities for South Africa’s poor economic growth. He said that the controversial Mining Charter could be re-evaluated, as he didn’t want South Africa to miss out on a potential commodities boom.

In a meeting on the sidelines with International Monetary Fund chief Christine Lagarde, the two agreed that “bold and timely reforms are needed” in South Africa, to quote Lagarde’s subsequent statement on the matter. In a meeting with World Economic Forum director Klaus Schwab, Ramaphosa “expressed South Africa’s appreciation for the forum’s continued support for and commitment to the development of Africa”.

If the trip to Davos was a “pilgrimage” – as Ramaphosa repeatedly termed it – then the pilgrims seemed to have performed with the necessary humility and devotion. The ANC ministers who accompanied Ramaphosa told journalists how different things seemed to be for South Africa at the global gathering this year; how a new spirit of optimism in South Africa was evident in the air.

Amid this triumphalism, it is easy to forget that South Africa’s once exceptional status as the world’s darling in such gatherings is now a very old story.

At Davos, there were new kids on the block, each with an exciting tale of renewal and growth to tell. Indian Prime Minister Narendra Modi was present as the first Indian head of state to grace Davos with his presence in 20 years.

Zimbabwe’s President Emerson Mnangagwa was also there clamouring for investment. Mnangagwa’s aim was similar to Ramaphosa’s too – set on convincing foreigners that Zimbabwe was throwing off the shackles and corruption of its former leader and embracing a new era.

But Zimbabwe’s story is also more forceful and more poignant than its southern neighbour’s at present, with South Africa having enjoyed the fruits of foreign investment for more than two decades and still finding itself in the economic doldrums.

Zimbabwe, noted the Financial Times, “has reached rock bottom. It has no currency, no relations with multilateral bodies and precious little foreign direct investment. Yet Zimbabwe is one of Africa’s potential success stories. It has good, if dilapidated, infrastructure, a manufacturing base and a long history of agriculture at scale. Most important, it has one of the best-educated populations on the continent.”

Many of these well-educated Zimbabweans have fled the country for more attractive economic options elsewhere, wrote the FT, but if persuaded to return would be a formidable boom to the country.

It wasn’t just countries from the global south selling themselves flat-out at Davos. The phrase “open for business”, once reserved for countries like Zimbabwe, emerging from isolation, was used to describe the USA by President Donald Trump. France’s endlessly savvy president Emmanuel Macron wooed global CEOs en route to Davos with an evening at the Palace of Versailles.

In such a competitive environment, Team South Africa would have had to work double-time. In international media coverage of the forum, issues relating to corruption and President Zuma dominated the South African focus. At a press conference for Team SA last Thursday, questions about graft within state-owned entities and the State Capture inquiry dominated.

Ramaphosa’s noises on the matter were consistently reassuring, promising a plumbing of the depths of corruption within SoEs proceeding in tandem with the “criminal justice system”.

On the question of Zuma, Ramaphosa had to take the line – as he did with Amanpour – that the president’s departure was imminent. CNBC Africa reported that one of the most common questions asked by foreign delegates at Davos was what would happen to President Jacob Zuma.

But even under a direct spotlight from Amanpour, Ramaphosa could not provide concrete details of how or when President Zuma’s exit from power would be managed. Back home in South Africa, there is still no firm indication either.

In 10 days, meanwhile, the State of the Nation Address will take place in Parliament. As is customary, foreign diplomats will throng the galleries of the National Assembly. Will they report back that, contrary to the assurances made at Davos, President Zuma is still very much holding the reins of a country supposedly desperate to change? DM