Countdown to #DayZero: Meet the anxious water collectors queueing at the Newlands spring 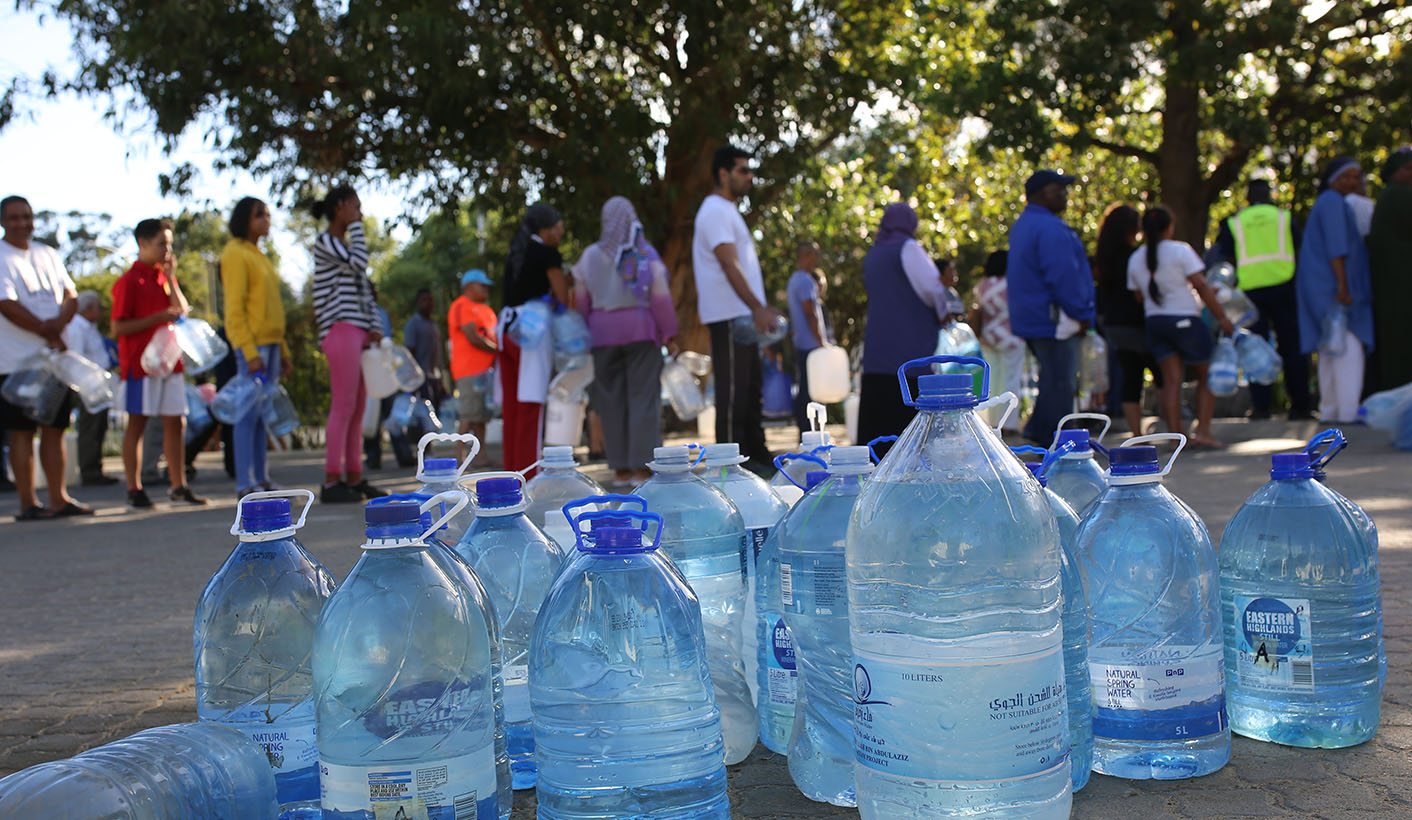 Amid panic ahead of Day Zero, the Newlands Spring in Cape Town has become so congested that security is being beefed up and operation hours are being extended to 24 hours a day. HLUMELA DYANTYI, SUNÉ PAYNE and APHIWE NGALO visited the spring last week and spoke to the growing number of Capetonians lining up for free water.

Stepped-up security measures at the Newlands Spring are to be implemented from next Friday, 2 February 2018, John Stenslunde, plant manager at the South African Brewery (SAB) in Newlands, told Daily Maverick. Three additional security personnel will be deployed to the spring, and the hours will extended to 24 hours a day. Currently the gates to access the spring — which is situated on the SAB premises — is open from 5am to 11pm.

As residents desperately seek alternative water sources, natural resources such as the spring at SAB and another outlet up the road off Springs Way have seen more residents queuing for water.

“The number of people visiting the spring has gone from 500 people a day to over 2,000 people a day” said Riyaz Rawoot, a concerned citizen who said he had assembled the pipes at the Springs Way spring last year, out of his own pocket.

He was speaking last week on Wednesday, so by now, the numbers would have swelled even further.

Over the past few weeks, Cape Town citizens have been mobilising and regrouping in the hope of avoiding Day Zero, currently projected to be 12 April.

The newly formed Cape Town Water Crisis Coalition (CTWCC) comprises of over 64 organisations, community groups and concerned citizens. The coalition this week visited the SAB and submitted a memorandum of demands about increased access.

In the memorandum the following demands were made:

SAB should increase the number of taps in order for them to be accessible to more;

The coalition also wants security to be provided at the cost of the brewery; and

The SAB and other breweries/wineries should prioritise by suspending their production until the end of the water crisis and instead delivering spring water to residential areas.

Currently at the SAB spring, residents can only get 25-litres of water at a time. If they want more, they need to go to the back of the queue again.

At the Springs Way outlet, there is currently no limit on water collection.

Stenslunde told Daily Maverick that the SAB and the City of Cape Town will work together on matters of security and law enforcement at the Newlands Spring.

Conrad Brie, 55, Silvertown: “I only wash three times a week”

Conrad Brie is sitting next to over 300-litres of water, when he only uses less than 30 litres a day. Conrad’s minimal use of water was not prompted by the restrictions sanctioned by the city. “I only wash three times a week, and I have been using water sparingly my whole life.’’ He is not worried about the 50-litres per day limit per person that will be in force from 1 February, as he already uses so little. However, one concern is that some households have a large number of people, so overall their usage would exceed the new limit of 350-litres per household. As things stand, the 350-litres per day limit, does not take into account the crowded households which are as a result of the housing crisis in the city.

Edward Mauritz, 65, Grassy Park: “I started using this spring, because of the high water bills I was getting from the city”

For Edward Mauritz, the water crisis means more hours will be spent waiting in line. Mauritz said for the past year, his family hasn’t been using tap water often. “I started using this spring, because of the high water bills I was getting from the city.” He said he once received a bill of over a R1,000 when his consumption of water was not out of the ordinary.

Among the small steps his family of five has taken to save water, they no longer wash their car or water the garden.

Ibtesaam Kasu, 28, Welcome Estate, Athlone: “Our family is doing as much as possible to save water”

The fear of not having water running from the taps from 12 April 2018 is one of the reasons why Kasu and her family have been using the spring. “Our family is doing as much as possible to save water, we no longer flush after a number one and reuse our water for laundry.” For a family of seven, made up of six adults and one toddler, saving water is not too much of a challenge. The family has still been able to maintain a healthy lifestyle while cutting down on their use of water.

Kasu said she feared that violence could erupt at the spring because of the exponential growth in the number of people lining up daily.

Gerard Maarsdorp was carrying three bottles of water to his car. Upon checking, Daily Maverick found his boot full of 4-litre bottles all filled with water. Maarsdorp says his family of eight has taken extra measures to save water since the City of Cape Town installed a water management device on his property.

“We’re trying our best under the circumstance” says Maarsdorp. His family has taken to using their wheelie bin that was previously a dirt bin to store the little rainwater they receive. Maarsdorp describes the people queing around the water point as “here for the same purpose”. The water he collects will be used for drinking.

Nomthandazo Seti, 49, Site B Khayelitsha: “Most white families use more water than us”

Seti works in close proximity to the Newlands Spring as a domestic worker. During her lunch break, she is found rushing, carrying a 5-litre water bottle which she hopes will be sufficient for her entire family for the day.

Translation: “My fear is that there are more and more people coming to the spring now and most white families use more water than us because they sometimes shower three times a day and they have a lot of plants so they have to water those plants. I’m worried that they’re going to suffer more than us because we’re used to this.”

Patsy Bagrim, Vredehoek, runs a school feeding scheme: “How are we going to make pap for the children in the mornings?”

Bagrim collects water for her family as well as for a feeding scheme that she is involved in at Good Hope Seminary Junior School. The school has over 400 students and the scheme provides for about 220 of those children who are Grade R to Grade 3 learners.

“It’s very scary and we’re cutting down as much as we can. We can do without electricity but with water it’s different. I mean how are we going to make pap for the children in the mornings?”

Karin Dehning, 56, Claremont: “I’m over the 87-litres now, I think it’s because I’m too conscious when it comes to cleanliness”

Dehning lives in Claremont. She has two pet monkeys. She finds it challenging to stay below the water limit, especially on hot days when she has to spray down her monkeys to keep them cool. Dehning is also concerned about the health issues that will arise from the water crisis and what the city is willing to do for those who do not have access to water.

“The water crisis is not too bad at the moment but I worry that we’re not going to have enough water to do daily work and there’ll be a shortage for things such as sanitation and for health issues. I’m over the 87-liters now, I think it’s because I’m too conscious when it comes to cleanliness and I have two monkeys that I take care of that I have to spray down when it gets hot. I’m more worried about older people and people who cannot afford cars to drive here and get water, what’s going to happen to them?”

Gavin visits the spring twice a week. He collects water for his 87-year-old aunt who can’t do it herself. He usually collects 15-litres when he’s alone and 30-litres when he’s with someone else. He has noticed how congested the area has become.

“Cars are parking everywhere and traffic cops were fining people just last Saturday. I was with my niece yesterday and she couldn’t even stand the heat. The other day a big fight broke out because the guard told one of the guys that he can’t get more than 25-litres and he retaliated. Obviously people jumped in to support the security guard but it was chaos.”

Lenore Nicholas, 58, Diep River: “I told him he can’t stop me when he comes with his friends who have big trucks and they get a whole lot of water”

“I fill up for my neighbour and my sister. The security guard knows me now, I told him he can’t stop me when he comes with his friends who have big trucks and they get a whole lot of water.” DM

Main Photo: The lines are getting longer by the hour at the Newlands Spring. Photo: Leila Dougan. Inset Photos: Hlumela Dyantyi and Aphiwe Ngalo