#CapeWaterGate: Mokonyane finds her inner diplomat while Ramaphosa promises to step in 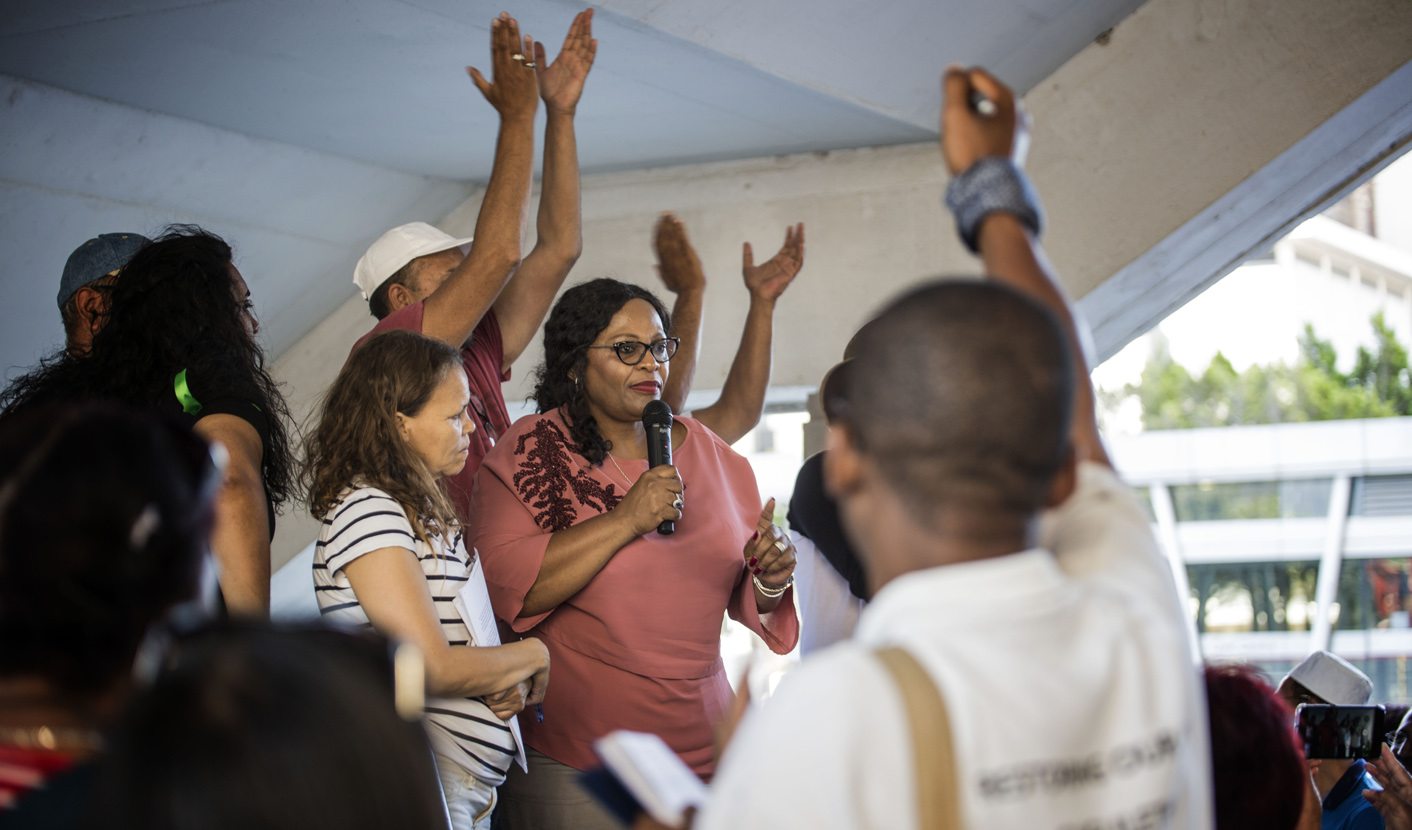 Water and Sanitation Minister Nomvula Mokonyane determinedly stayed on message on Sunday: Cape Town’s Day Zero, the date taps are set to run dry, could be avoided – if everyone sticks to the daily personal water limit of 50 litres from February. Despite the odd wobble, that remained the message when Western Cape Premier Helen Zille chose her political moment to question, again, why national government is not giving more money to the province. Deputy President Cyril Ramaphosa, facing an ever-lengthening to-do list, may just have to dust off his negotiator’s cap to stop the politicking rather than just “corral” action teams. By MARIANNE MERTEN.

“We must avoid Day Zero through our behaviour. The solution does not lie in throwing money (at the water crisis), but the solutions lie in reprioritisation,” said Water and Sanitation Minister Nomvula Mokonyane.

Her department is doing for Cape Town, and the Western Cape, what has been done in other parts of the country where the harshest drought in living memory has threatened water supplies over the past two years. And the department is similarly supporting the Northern and Eastern Cape, particularly Nelson Mandela municipality, and Limpopo, where drought conditions continue.

For Cape Town, immediate measures include bringing in borehole diggers to assist the city’s aquifer drilling and increasing pump capacity to the city from several dams under departmental control. Although Cape Town in December 2017 declined the nationally directed intervention by the Umgeni Water Board to build a temporary 10 mega-litre desalination plant – the board had built one at Richards Bay amid its water crisis – there was continued support for desalination to come on stream by May 2018. Long-term plans are under way to increase water augmentation from dams by 2020/21.

But without rain to replenish dams and other sources of surface water there was only one effective measure to do right now, the minister said.

“Water users in Cape Town are still using more water than their rightful allocation. It is therefore important that all users play their part in reducing water consumption.”

The largely well-heeled crowd gathered at one of Cape Town’s private clubs, Kelvin Groves didn’t quite buy it.

“Where is the action?” Mokonyane was heckled repeatedly. “What are you doing?”

It was a sentiment Western Cape Premier Helen Zille tapped into on the back of her recent Twitter messages ramming home that water was a national responsibility. As one tweet on Saturday read:

“… Water planning and bulk water supply are national competencies in law. The National Department of Water and Sanitation has washed its hands of its responsibility. (excuse the metaphor)”.

On Sunday the premier tackled the minister’s call not to politicise the water crisis, saying debate was not disagreement and that the diagnosis of the problem was questionable. For example, the national department’s desalination plans via the Umgeni Water Board came as the city had already issued a tender for such a private sector-driven temporary plant in the same place.

“Although behaviour change is essential, we can’t do so without extra money,” she said, adding that it was a national function to provide bulk water. There was loud applause.

Mokonyane stuck to her guns. There was support for Cape Town as there was for other drought-wracked parts of South Africa, and there was money, but it was also about agreeing to priorities “rather than saying the Western Cape needs R5-billion”.

And she urged Zille:

“Debaters do have a platform to meet. Let’s do it there.”

Zille, like Mokonyane, is part of various inter-governmental governance structures, including the Presidential Co-ordinating Committee which brings together ministers, premiers and mayors, but from whose latest meeting, Daily Maverick has been reliably informed, Zille walked out just as the City of Cape Town was to make its presentation on the water crisis.

Later Mokonyane told Daily Maverick that while she knew how to play politics, this water crisis required depoliticisation and co-operation:

“It’s for the supporters of the DA to see what kind of leaders they have.”

That a series of meetings is under way to bring all spheres of government together over the Cape Town water crisis, and the Western Cape drought, including another round of discussions on Tuesday, clearly emerged on Sunday. And that includes meetings with organised agriculture, including AgriSA, which was thanked by Mokonyane for coming to the party to stop farmers from using more than their (reduced) allocations.

Some of these meetings have included Deputy President Cyril Ramaphosa, who when asked at last week’s World Economic Forum (WEF) in Davos, Switzerland, promised to bring everyone together.

“We’re facing a real, total disaster in Cape Town which is going to affect more than four million people,” he said in an interview with CNN. “And I’m going back home and I’m going to corral as many people as possible to put our heads together and see exactly what we should be doing, not only in the immediate term, but also in the long term. But in the immediate term, we’ve got to make sure that we bring water to the people of Cape Town without any fail.”

On Sunday it emerged that calls to Mokonyane and Co-operative Governance Minister Des van Rooyen, whose department is in charge of disaster funds, had already been made. It also emerged that Ramaphosa met city officials and politicians like JP Smith, the mayoral executive committee member for safety and security, over the weekend. Smith has been spearheading the City’s water crisis communication although the DA’s Federal Executive, the party’s highest decision-making structure, earlier this month he put his colleague, MMC for Informal Settlements, Water and Waste Services and Energy Xanthea Limberg and Deputy Mayor Ian Nielson, in charge.

Mokonyane on Friday met civil society organisations and others over the water crisis, and the Western Cape ANC. Provincial ANC secretary Faiez Jacobs in a statement on Sunday said the party understood “#DayZero is a DA intervention that translates into nothing more than an unnecessary tool of rattling residence [sic] on a pseudo-judgment day rhetoric”.

Demand management has failed in Cape Town, and augmentation on all fronts was key:

“It is this counterintuitive decision-making by the City of Cape Town and the province that have brought us to this edge of perdition. Desalination and groundwater availability are not mutually exclusive,” added Jacobs.

But the talk of Day Zero is having an impact. Not necessarily on getting all Capetonians to reduce water consumption – 50% of residents are not complying with the current 87-litres a day per person as usage is further curtailed from 1 February, according to City statistics – but on fears of an apocalyptic situation that has triggered water stockpiling and the (illegal) sale of municipal water in 5-litre containers at several shops. The Doomsday narrative appears popular as one of the attendees at the Cape Town Press Club event put it to the minister:

“Everyone who can must leave Cape Town. Not on Day Zero, but before… Thousands will die.”

It was the technocrat, Water and Sanitation Deputy Director General: Strategic and Emergency Projects, Trevor Balzer, who stepped into that murky whirlpool.

“I am shattered by this… We do not run the (water) system to fail. What that requires for all of us is to use water judiciously.”

And Capetonians are not doing enough to manage what currently is available to them.

“The consumers of Cape Town will make the system fail,” he had earlier told the audience, pointing to how Johannesburg and eThekwini (Durban) had managed to stave off water shutdowns. “We’ve managed constrained conditions in Gauteng which were as constrained as they are here (Cape Town).”

According to official statistics, Cape Town homes use 70% of the city’s water. Of this, private homes use 55%, blocks of flats just over 9% and residents in informal settlements 4.7%. Across the whole Western Cape Water System, which includes the rural hinterland, residents of towns and dorps consume 40% of the water, with agriculture using 60%, according to national departmental statistics.

Mokonyane, who’s known not to shy away from political sparring as minister or ANC head of elections, on Sunday found the diplomat inside her. It might be an indication of the new political direction under Ramaphosa as ANC president.

Ramaphosa’s undertaking to “corral as many people as possible to put our heads together…” was welcomed by DA national leader Mmusi Maimane, who now leads the fight to stave off Day Zero in line with the party’s Federal Executive decision with a hashtag launched last week. Maimane took to Twitter:

“I would welcome the opportunity to engage the DP (deputy president) on this crisis. We need all spheres of government to work together to resolve. Effectively, we will also need the DPT (department) there so all obligations are fulfilled. Look forward to it. Let’s #DefeatDayZero”.

For Mokonyane, like the City politicians across town speaking at the same time, key in in this water crisis was compliance with restrictions to reduce consumption. “Fellow South Africans living in Cape Town, we care about you,” said Mokonyane on Sunday. “We must, Premier Zille, have one message, many voices.” DM