#CapeWaterGate Explainer: What do we know about Cape Town’s disaster management plan? 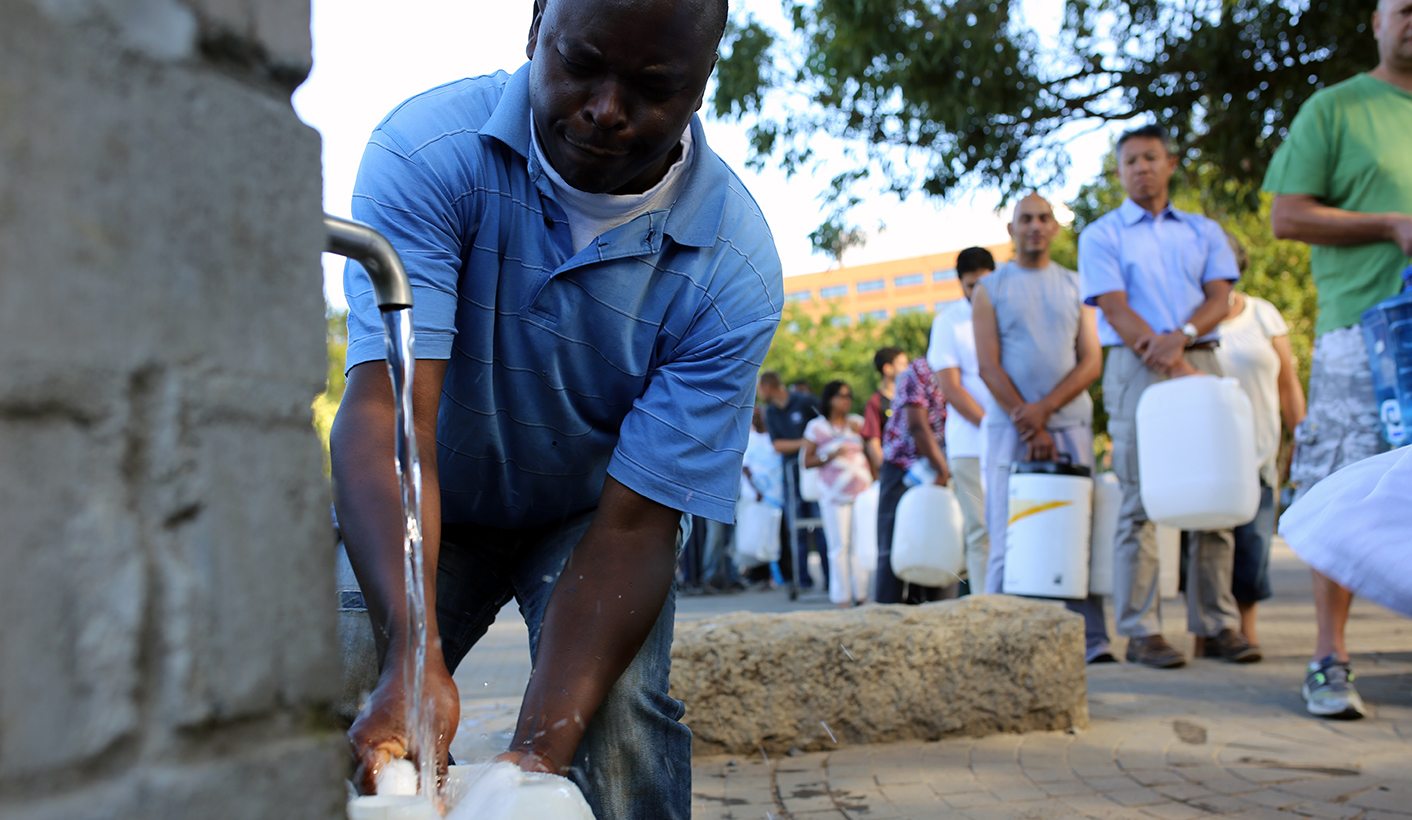 On Sunday morning, officials gathered at the Disaster Risk Management Centre in Goodwood, Cape Town, to brief media on preparations for Day Zero. This followed hot on the heels of DA leader Mmusi Maimane’s launch of the #DefeatDayZero campaign in Athlone the previous week. Information is trickling in (poor choice of words, we know) bit by bit. Authorities acknowledge it’s an unprecedented situation and to some extent they’re shooting in the dark. But here’s what we know so far. By MARELISE VAN DER MERWE.

When will Day Zero come?

The date, as we know, can shift. But City officials have confirmed that it will kick in when dam levels hit 13.5%. Mayco Member for Safety and Security JP Smith said it would take approximately two weeks to shut down water systems and similarly take a couple of weeks to activate the water points and other disaster management systems, so those two processes would overlap, although preparations were already under way.

How long will it last?

Anything from a few days to three months. Officials don’t know.

Officials are still noting that Day Zero can be pushed out by reducing consumption. The hope, said Smith, is that it can be deferred long enough that the City can bring additional augmentation systems online or – better yet – until winter rains come. But until then, aggressive restriction measures would still be in place. These include water rationing through throttling and advanced pressure management.

It should be noted that Day Zero is not the day Cape Town “runs out” of water. It’s the day officials move from Phase One of restrictions (preservation restrictions, the ones listed above) to Phase Two, what the City has termed disaster restrictions. Disaster restrictions entail extreme rationing, partial shutdown of the water system and provision of water through designated water points. (This is not to minimise the potentially devastating impact of doing so. But it’s an important distinction to make.) In October 2017, Patricia de Lille issued a public statement referring to Phase One, Two and Three of the City’s disaster management plan. She described what would happen if Cape Town ran out of water supply after extreme rationing following Day Zero, saying: “At this point, the City would be incapable of drawing water from its surface dams in the Western Cape Water Supply System. There would be a limited period in which the City can continue to supply water before complete water system failure.” This is the point at which Cape Town would run out of water.

About that enforcement thing. How’s it going?

Smith referred to “blitzes” that had taken place in recent weeks and that there had been increased citizen engagement in reporting water infringements, which he viewed as a positive development.

Two questions from the floor, however, raised the question of legalities and bureaucratic processes. One asked why stores selling water illegally were still open and allowed to operate. The response was a brief discussion of further investigation and a review of licensing. Another question was regarding enforcement of restrictions around borehole use, which the City is not mandated to do. *Legislation around small boreholes is not particularly strict, so despite the Level LB restrictions, Mayco Member Xanthea Limberg acknowledged that the City had to be “very careful in its wording” when it addressed citizens around borehole water use.

How many water points will there be?

According to Smith, around 180 are finalised thus far, but another 14 are in the pipeline for approval.

The locations are still being determined, as it takes some effort to find locations that are accessible, have ample parking, and can easily remain connected to the reticulation system.

Each collection point should have 50 to 100 water outlets, with vehicle and pedestrian options for collection, as well as bulk water collection points for organisations delivering to the vulnerable. There will also be on-site toilets and refuse management, and lighting.

Operating hours will be flexible depending on how busy each point is.

The City has called on NGOs, community organisations and faith-based organisations to volunteer their help, as well as neighbourhood watches and community policing forums.

What about security at the water points?

Ah, the million-litre question. According to Smith, access to water is a human right and nobody would be turned away from the water points. You won’t require an ID. Smith said the City would consider reviewing this if major problems were experienced, but they did not anticipate any as collections were limited to 100 litres per person (if you are collecting for others) and this in itself was limiting.

Arrangements have been made with National and Provincial Government, with safety and security deployments with SAPS and the SANDF. The Venue Operations Centre will include Law Enforcement, Traffic Services, City officials, volunteers and a first aid point. There will also be “light regulation” in the form of officials to monitor abuse, and the public is asked to assist.

Approximately 75% of the city’s water system will be shut off and residents will be allocated 25 litres per day. At this stage, all we know is that the CBD and “essential services” will remain online. At this stage, informal settlements are also being spared.

Old age homes are not included in “essential services” though Safety and Security director Richard Bosman said the City is making arrangements for deliveries for vulnerable groups, including the elderly. However, he was unable to commit to this yet as arrangements were not finalised.

Regarding which areas would be cut off or not, Bosman said the geographical boundaries would depend on the water system itself and how the pipes are connected, rather than any human decision – in much the same way electricity grids are predetermined.

How the heck are we going to flush?

Deputy Mayor Ian Neilson said the City was hoping not to resort to waterless sanitation. The flushing problem, in short, has not been settled yet, though there are a few options on the table. Though seawater is corrosive, said Neilson, officials were considering whether it might be worthwhile to approve the temporary use of seawater in some areas. It would be possible to flush large sewers through the reticulation system, he said, though individual residences posed a greater problem. Probably the first smiles came from those gathered when Smith mentioned asking citizens to perform what officials had dubbed a “royal flush” – a co-ordinated flush once a day at the same time. The short answer, however: we don’t know yet.

Are we going to shut down airports?

No. They’re National Key Points, which will remain open and connected to the water system.

Are we going to tell the tourists to stay away from us and our smelly pits?

Apparently not. In response to a question from a foreign correspondent, Neilson said the message to tourists was “please visit us but save like a local”. The rather alarmed-looking journalist asked whether visitors would be expected to queue for water, to which Neilson responded that many of the hotels that tourists would be visiting would be in key business areas which would have access to water. Local businesses would suffer without tourism, he added.

Where was Patricia de Lille?

The removal of the Executive Mayor, who is facing a motion of no confidence, from water-related management seems to have stuck. At the briefing were Executive Deputy Mayor Alderman Ian Neilson; Mayoral Committee Member for Safety and Security Alderman JP Smith; Mayco Member for Informal Settlements, Water and Waste Services Xanthea Limberg; Reticulation Manager Pierre Maritz, and Safety and Security Director Richard Bosman.

Elsewhere, authority figures weighing in on the water crisis in recent days were Premier Helen Zille, DA leader Mmusi Maimane, Minister of Water and Sanitation Nomvula Mokonyane (who addressed the Press Club on Sunday); the citizen-led Water Crisis Coalition, and the Western Cape ANC, which issued a bruising statement.

The latter statement, however, was an indication that the removal of De Lille from water-related duties was not going to mean an end to political conflict. Among other things, it slammed Day Zero as a “DA invention … an unnecessary tool of rattling residence on a pseudo judgement day rhetoric”. It added: “The ANC was clear to the Minister that the demand side management of water has failed and frankly has never been sufficient to deal with the deep-seated water challenges of this province… The ANC noted that the department has already met with the City and released funding for them to procure desalination plants as an emergency measure for CoCT. The ANC is concerned however that the City of Cape Town requested that Minister delay the implementation of the desalination option so that they can assess the groundwater availability.”

Where can we keep track of the water use and dam levels?

The water dashboard can be accessed here.

What did the national minister say?

Nothing very comforting. In short, money won’t solve the problem and Cape Town must “adapt”. DM

Photo: Jaffie Presence, 59, fills up a container with fresh water from the Newlands Spring. He lives with four family members in Kuils River. Photo: Leila Dougan