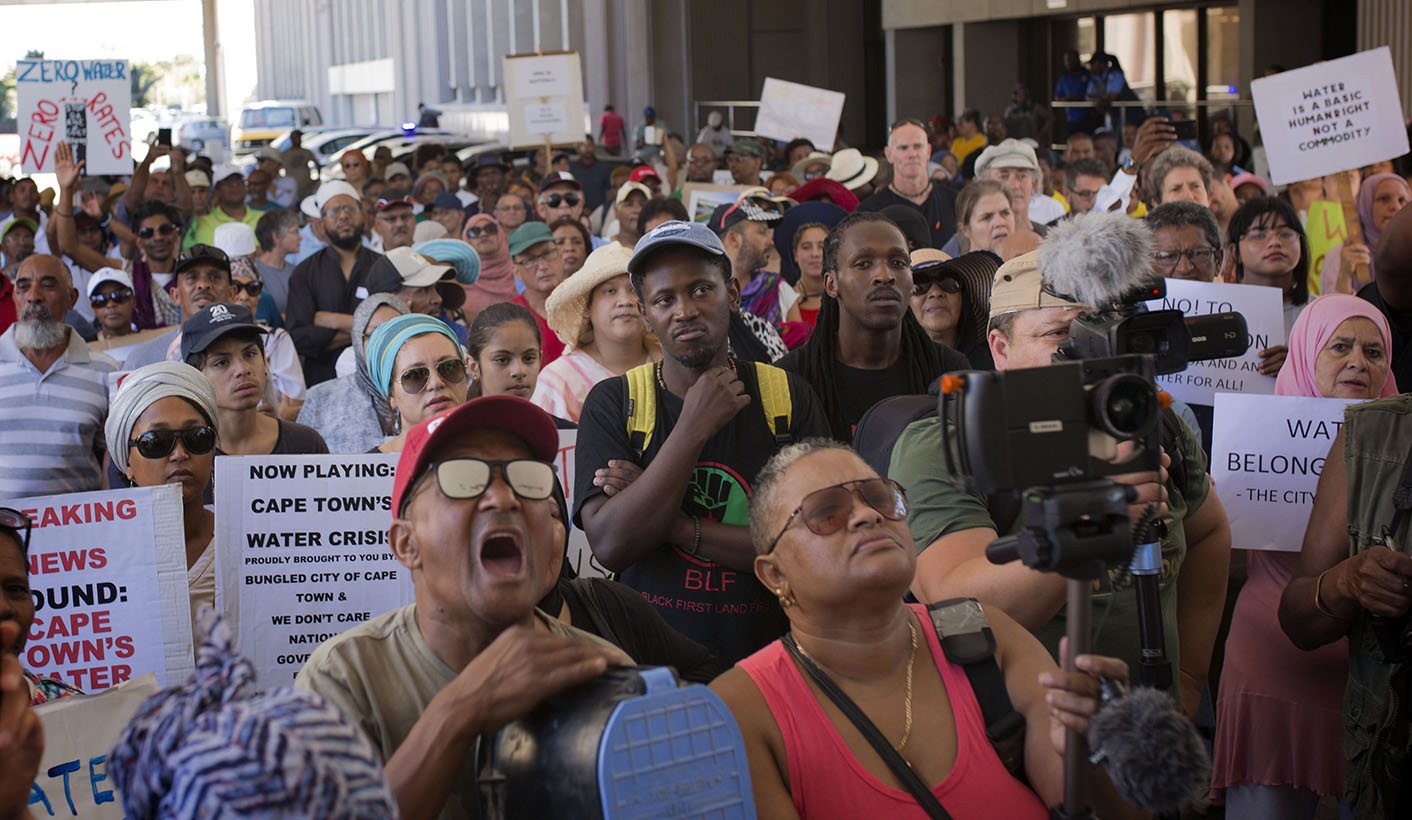 Residents representing their various communities took turns standing on the back of a white bakkie in front of the crowd and shared their stories, anger and concerns, during a protest organised by the Cape Town Water Crisis Coalition at the Cape Town Civic Centre on Sunday. By LEILA DEE DOUGAN.

A few hundred people gathered at the Cape Town Civic Centre on Sunday afternoon with placards reading “Water for all not for profit”, “No to privatisation of our water” and “Water is free”. The protest was organised by the Cape Town Water Crisis Coalition, a resistance movement comprised of civil society organisations, worker organisations, faith-based groups as well as local farmers and residents.

The coalition was formed two weeks ago, and the intention of the protest was to deliver a five-page memorandum to the City of Cape Town outlining that the root of the water crisis is a “managements crisis”.

Shaheed Mahomed, a committee member of the Water Crisis Coalition, said that there was a need for “organised resistance” which allowed the voices of residents in all corners of Cape Town to be heard as the city moves closer to “Day Zero” – the day which will see the reticulation system turned off and residents queueing for 25 litres of water per person per day.

Dam levels continue to plummet during the summer months. Residents are being urged to use less than 50 litres per person per day and consumers are hitting the stores and stockpiling water for when the taps run dry. Bottled water is being sold out daily without even hitting the shelves along with waterless hand sanitisers, waterless cleaning products and sanitising wipes and sprays.

“This is not just about a drought. This is a water management crisis. This is a feeding opportunity for profiteering by the big capitalists that are being opened up by the City and by various levels of government… [this is about] the privatisation of our water,” said Mahomed.

“Everybody’s lives will be completely destroyed and all because of the negligence of the City. That’s why we are saying it’s a water management crisis. ‘Day Zero’ is a political attack on the people, it’s being used to terrify us,” said Mahomed.

Residents representing their various communities took turns standing on the back of a white bakkie in front of the crowd and shared their stories, anger and concerns. One woman said she is worried about the elderly in her community who would be expected to collect 25 litres of water once the taps are turned off. Another women expressed outrage at her water already being turned off due to the controversial water management devices, which have been installed by thousands in the homes of high consumption users across the city.

Properties where households consume more than 10,500 litres per month have been fitted with water management devices, essentially pressure management technology which the coalition has renamed “weapons of mass destruction”. Mahomed said the devices are causing havoc in households. In theory the water management device is supposed to set the limit of water available to a household per day. However, residents have complained to the coalition of leaks resulting from the technology, defective devices and in some instances being charged for the installation of the device.

“The City knows that there is supposed to be a process. You first give education about how the device works. There was no training given to the people… and some of the devices have been put in without people even being present. They come home and they find a [water management device] has been forced upon them,” he said.

Naomi Jansen is a resident from Retreat who says that the water crisis is “pathetic and unfair”. “These are the people who are supposed to be managing [the city]. We pay our taxes and then we have to deal with the fact that we don’t have a basic necessity,” she said.

Also in attendance was Pagad’s national secretary, Abieda Roberts, who said that the people’s voices must be heard. “We are tired of waiting. We are tired of being oppressed and pushed around… The ANC don’t care. De Lille’s government doesn’t care. Nobody cares about the people but we are going to take the water crisis into our own hands and we are going to do what we need to do to ensure that everyone has water.”

Pamela Court from SA First Forum said the lack of information around Day Zero is causing unnecessary panic. “The City and the government are totally overwhelmed. They’re not prepared and everybody is passing the buck. So let’s take ownership, the people will have to step up to the plate and find solutions,” she said.

“We must keep on doing this,” said Salt River resident Shereen Marlie. “Water is free for all, it doesn’t belong to any one of us. [The City] didn’t listen to the warnings about running out of water many, many years ago. Everybody just wanted to put money in their pockets.”

Mayco member, Xanthea Limberg, stood behind the parked bakkie, ready to collect the coalition’s memorandum. However, the coalition insisted that the memorandum can only be accepted by Mayor Patricia de Lille.

“The mayor was supposed to arrive, she was invited but didn’t pitch,” said Mahomed. “If the mayor is not here we won’t hand over the memorandum.”

They insisted on handing over the memorandum to De Lille despite the fact that the water crisis is now in the hands of Deputy Mayor, Ian Neilson.

“De Lille spearheaded the water crisis committee. She’s the political head of the city. They didn’t confirm to us that Limberg was coming. We saw [Limberg] there and we weren’t told that she would be there. It’s undermining the masses because if you listen to the stories of the people, the people are suffering. It’s total disregard of the people. With all this infighting they’re playing games with us,” said Mahomed.

Nomvula Mokonyane, Minister of Department of Water and Sanitation, made a brief appearance later in the afternoon. She took up the microphone on the back of the white bakkie.

“The leadership must take responsibility. We don’t care what happens between Patricia and Helen Zille. We want a government that listens to us,” she said.

Mokonyane said leaks in the city must be fixed and water coming from desalination plants must be fairly priced and accessible to the poor. “Those in the suburbs must remember… that there are those who still drink water with animals, so [the City of Cape Town] must show the plan for the future so that generations to come know (that) out of this crisis comes sustainability.”

Eventually the group started thinning out; some remained behind to take photos and selfies with Mokonyane. But Mahomed’s parting words signal the beginning of protests as Day Zero looms.

“In every area, every street, every workplace, we need to get organised. Maybe we need to have a mass march to Parliament,” said Mahomed. DM

Photo: Residents and members of civil society organisations convene at the Civic Centre in Cape Town on Sunday 28 January. The Cape Town Water Crisis Coalition organised the event and is encouraging communities to mobilise around #DayZero. (Photo: Leila Dee Dougan)