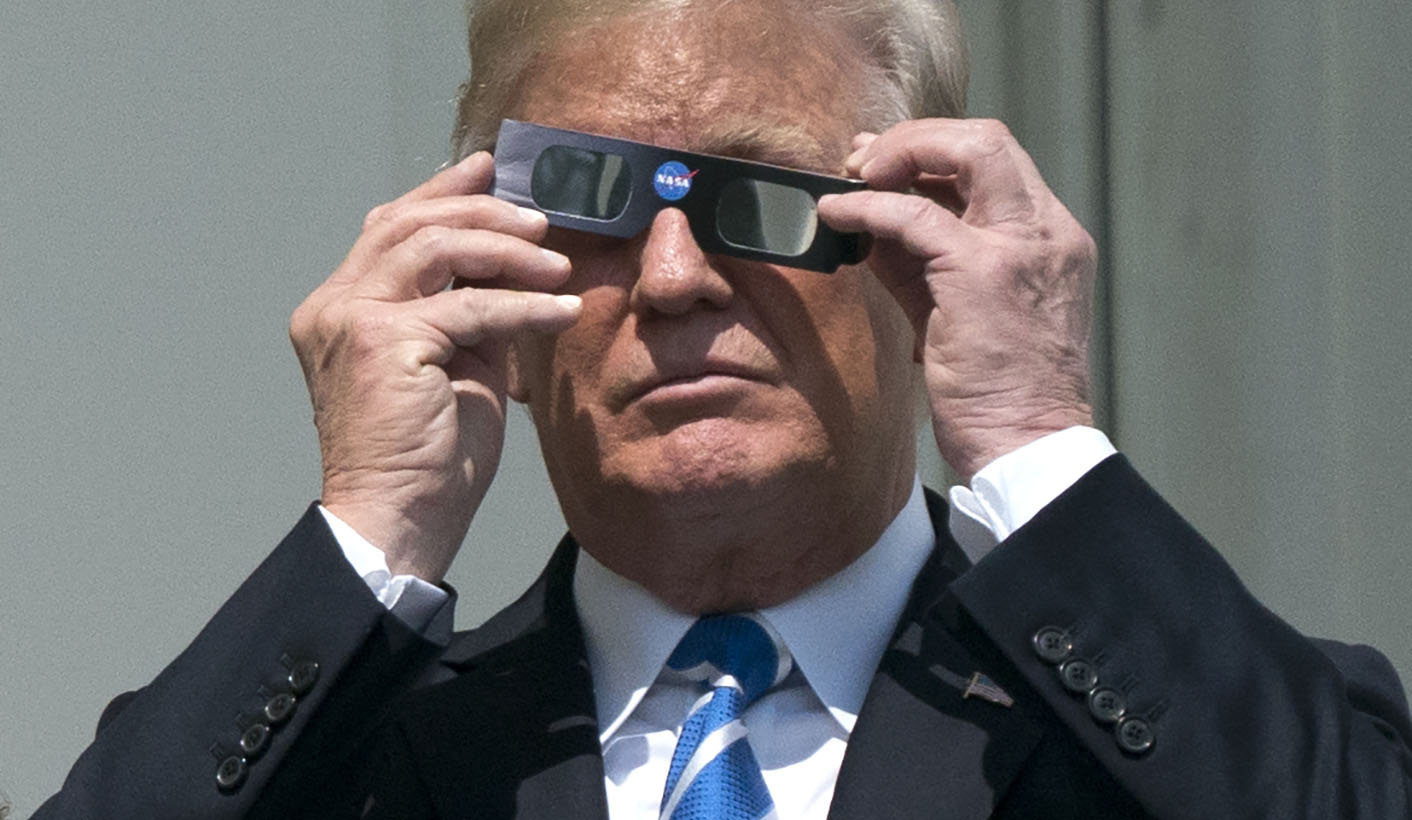 One of the enduring images of 2017 was US President Donald J Trump, a few months into his tenure, squinting bare-eyed at a solar eclipse. During his first year in power, Africa was in a similar position, watching while his presidency slowly blocked out the superpower behind him. By COBUS VAN STADEN.

The year 2017 alternated between US President Donald Trump ignoring Africa, with many key positions dealing with Africa remaining unfilled (true also in Europe and the Middle East), and heaping crass indignities on the continent.

His approach makes it easy to conflate the person with the country. The White House’s tacit acknowledgement that his vulgar comments resonated with his domestic base raises the question of how healthy the US-Africa relationship really is.

In thinking this through, one needs to acknowledge that the United States has a complicated political system that cannot be reduced to the personality of the commander-in-chief only. US foreign policy is shaped by a multitude of actors, including many who are vigorously opposed to Trump. The president, while very powerful, is also constrained on many sides. In the second place, those viewing the situation from the outside also need to acknowledge that domestic opposition to Trump’s foreign initiatives, ranging from his stance on climate change to migration, is significant. In the bigger scheme, Trump’s presidency could be like a solar eclipse: dramatic, but relatively fleeting. The US-Africa relationship will continue after Trump. However, his first year also reveals that the relationship is changing, possibly in fundamental ways.

The administration’s budget proposal, which at the time of writing has still not passed through Congress, reveals a stark shift away from the approaches of its predecessors. First, the State Department faces cuts of 31%. This means that experienced bureaucrats with years of institutional memory about foreign relations with Africa and the rest of the world are being pushed into early retirement, or leaving for the private sector. This is compounded by disarray in the appointment of diplomats. There is still no permanent Assistant Secretary of State for Africa (Donald Yamamoto was finally appointed in a one-year acting capacity in September 2017), and key African states like Ethiopia, Tanzania and South Africa still have no ambassadors.

The State Department budget is submitted jointly with that of the United States Agency for International Development (USAID), the government’s key aid and development agency. This puts severe pressure on American development co-operation with Africa. The former US diplomat J Brooks Spector points out that some of the Obama-era initiatives, including the Power Africa electrification project and the Young African Leaders Initiative, are particularly vulnerable: “They depend year on year on Trump’s goodwill to keep them in the budget.” Even the George W Bush-era Presidential Emergency Plan for AIDS Relief (Pepfar) – popular in Africa as well as on both sides of the US political spectrum – could be facing cuts.

While slashing the State Department’s allocations, the proposed budget will also boost military spending by 9%. This is not as big a hike as Trump had promised, although it is $85-billion above a congressional cap set in 2011. The big change is that the US military machine is increasingly interested in Africa. In October, Secretary of Defence James Mattis told the Senate Armed Services Committee that the military is shifting its counterterrorism focus to the continent. In the same month, America’s ambassador to the UN, Nikki Haley, also emphasised bilateral counterterrorism initiatives during her visit to the African Union Commission in Addis Ababa. Bilateral is the key word here, since the Trump administration plans to cut contributions to multilateral UN-led peacekeeping. Future counterterrorist collaborations will therefore take place within highly unequal power relationships between the US and individual African states, rather than through a broader UN framework. This means the loss potentially of both UN and AU oversight over military activities on the continent.

In theory, the reduction of development aid is not necessarily a fatal problem, if it is accompanied by additional trade. The Clinton-era African Growth and Opportunity Act (AGOA), which provided tariff-free entry into the US market to some 6,000 African product lines, seemed to offer such a boost.

However, the success of AGOA has been middling. In the first place, 67% of all African imports to the United States are raw energy exports, mostly oil. Its value was pushed down by the fall in global oil prices and the development of America’s domestic shale oil industry. Of the non-energy exports, 23% comes from one country: South Africa. This means that the majority of the 40 African signatories to AGOA do not make use of the initiative at all, or only in insignificant ways. Some 80% of all AGOA exports in 2014 came from only four countries: Angola, Nigeria, Chad, and South Africa. Three of the four are major oil producers. The reasons for this failure include the fact that AGOA was not backed up by measures boosting market access and infrastructure, in part the problem that the Obama-era Power Africa initiative wanted to address, in addition to the lack of diversification of African economies. Despite these problems, AGOA still supports 120,000 jobs in the United States and 300,000 in Africa.

In 2015 Congress extended AGOA to 2025. It will therefore outlive the Trump administration, although AGOA can be unilaterally revoked.

Trump’s first year in power has put certain US-Africa issues in stark relief. It revealed the deep racial schisms underlying his domestic victory which has bedevilled US relations not only with Africa but also other parts of the world such as the Middle East. It has the potential to overwhelm the good faith that remains between the US and Africa, with lasting consequences for the future trajectory of this relationship.

The United States must also acknowledge that the heyday of the late 1990s and the early 2000s, when its economic might and status as sole superpower allowed it to shape overseas development agendas, is passing. The effects of the 2008 economic crisis still linger, and other powerful players are emerging. Africa has more options than it used to have.

As Trump’s recent comments on African migration were roiling the US-Africa relationship, China’s Foreign Minister Wang Yi was highlighting the opportunities for the continent in China’s Belt and Road Initiative, and the upcoming Forum on China-Africa Co-operation summit. Inevitably, the timing led to a flurry of think pieces arguing that the US is losing soft power to China in Africa.

That said, America is still a superpower with a massive market. Africa should interrogate why it has found it so difficult to take advantage of what the US is offering. Why is Africa locked into exporting raw materials, and how can it move beyond that trap? How should African policy-makers and entrepreneurs adapt to take full advantage of AGOA? How can the trade and investment relationship be improved after 2025? How can Africa leverage the opportunities of AGOA to get better deals out of China, India, and all its other emerging partners?

These are questions Africans should be asking. This does not mean Africa should simply ignore the insults coming from the Trump administration. However, Africa should also keep a beady eye on the bottom line. Africa can and should be richer than it is, and AGOA and other US initiatives offer opportunities, even within a radically unfair global trade and geopolitical environment. The Trump era might well prove toxic to the US-Africa relationship, but it has a longer trajectory. Africa should strive to make it more profitable for Africa. Trump might dismiss Africa. But if Africa allows him to eclipse its ambitions, it only has itself to blame. DM

Cobus van Staden is a senior researcher under the Foreign Policy Programme at SAIIA.

Photo: US President Donald J. Trump adjusts his glasses while viewing the solar eclipse from a balcony of the White House in Washington, DC, USA, 21 August 2017. Photo: EPA/SHAWN THEW