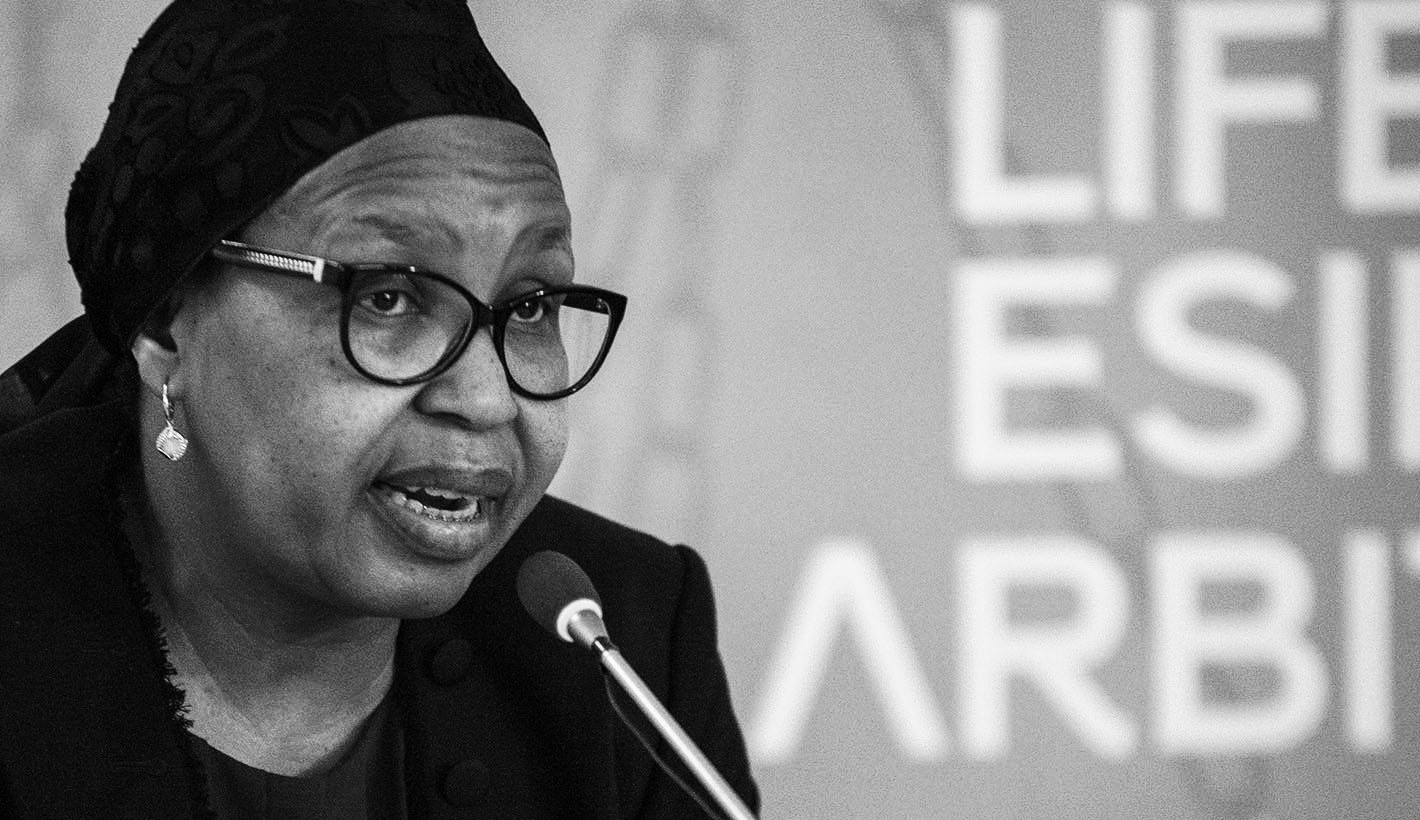 Former Gauteng health MEC Qedani Mahlangu was warned of the disastrous implications of moving psychiatric patients from Life Esidimeni. On Wednesday, she denied having heard any of the foreboding predictions. Welcome to Qedani’s world. By GREG NICOLSON.

Former Gauteng health MEC Qedani Mahlangu led the health department when the Gauteng Mental Health Marathon Project was implemented, which led to chronic psychiatric patients being moved to NGOs and community care, resulting in at least 143 deaths. The MEC, who resigned in 2017, said on Wednesday that the deaths could have been prevented if officials in the health department had told her the truth.

“I mean that if probably I was given accurate information at the time, I was given accurate facts about what was going on in the NGOs, or the potentials risks by the officials, we would not be sitting here today,” she told the Life Esidimeni arbitration, which has been running in Johannesburg since October last year.

Witnesses described Mahlangu as the driving force behind the project who repeatedly shut down opposition, and Advocate Adila Hassim, representing the families of the deceased, questioned her on the many warnings she had received before and during the deadly plan.

In November 2015, Mahlangu told the Gauteng legislature that after Life Esidimeni’s contract was to be terminated most of its 1,700 patients under state care were to be moved to government facilities in a bid to save the health department money. The South African Depression and Anxiety Group (Sadag) researched the facilities she mentioned. Sadag wrote to the MEC saying most facilities were either full, dilapidated, or did not provide suitable care.

Okay, maybe she missed the warning.

Sadag’s letter was addressed to Mahlangu, but she forwarded it to health department head Dr Barney Selebano. She claimed not to have read it and said she was “shocked” and “disappointed” that Selebano and the department’s mental health director Dr Makgabo Manamela would have misled her.

“The discharge of users in these circumstances is a grave breach of their rights to healthcare services, dignity and equality,” wrote Sadag’s Cassey Chambers in her affidavit. The South African Society of Psychiatrists had already sent a letter to Mahlangu in June 2015 warning her of the likely consequences of ending the Life Esidimeni contract.

Again, Mahlangu claimed ignorance. She said she was aware of the legal process but not its details. In an out-of-court settlement, the department agreed to provide equivalent or adequate care for patients.

Levy Mosenogi, who was appointed by the department to lead the move out of Life Esidimeni, wrote to Mahlangu in February 2016 pleading for the private healthcare provider’s contract to be extended and for options to be considered other than moving patients to NGOs. He warned her of the implications of the plan and suggested the department purchase Life Esidimeni facilities, which it could have afforded. In the same month, relatives of patients marched to the department of health protesting against the plan.

Mahlungu again claimed having known little about the complaint, from her own department nogal, which is beyond belief.

On Wednesday, she denied having known details of Mosenogi’s proposals, claiming she was on sick leave at the time. Mosenogi and other officials claimed Mahlangu was the driving force behind moving patients to NGOs and created a climate of fear that prevented departmental officials from expressing their views.

The groups who took Mahlangu and her department to court in December returned to court in March 2016. They warned that the plan to send patients to the Takalani Home would mean sacrificing levels of care, as the facility primarily treated children, and would distress patients unnecessarily. Takalani saw 37 patients die as a result of the Esidimeni move. One patient was allegedly raped and two contracted typhoid.

On Wednesday Mahlangu may well have impersonated a robot programmed to say. “I know nothing.” She had heard of the case warning of the consequences of moving patients to Takalani, but couldn’t recall the details. She said MECs are always cited as court respondents and cannot follow every case.

In June 2016, when patients started being moved, the South African Society of Psychiatrists released a statement on the inhumane manner in which patients were being moved to NGOs. Its detailed statement was ignored by the department, which said repeatedly that the process was going smoothly. Mahlangu has said the only problems she had heard of during the move related to Life Esidimeni refusing to release patient files, which it could not give over, according to regulations, but had invited the department to come and take photocopies, which it could not afford.

Mahlangu, testament to her ignorance or lack of care for mentally ill patients, said she only knew in November 2016 that Life Esidimeni patients died before she had to answer a question in the Gauteng legislature. She said 36 patients died. More than 80 were already dead.

She repeatedly blamed her staff for failing to give her accurate information. But it appears impossible for Mahlangu not to have known about the warnings of impending disaster, despite the demands she had as an MEC. To have not known how wrong the project went as it was occurring, she must not have been merely on sick leave but living in an alternate universe.

These cases represent just a few of the warnings Mahlangu received. The extent of predicted calamity is far to vast to mention.

The media reported on the Gauteng Mental Health Marathon Project before, during and after it was implemented. Mahlangu suggested she saw media reports, when she claimed the media had an agenda. She probably saw the reports and not only ignored them but made it her agenda to pursue the deadly plan to spite her critics. There is no other explanation, despite her denials, for her actions.

Mahlangu finished her testimony on Wednesday claiming she was not aware of the consequences of moving patients from Life Esidimeni. Health Ombudsman Professor Malegapuru Makgoba found she was negligent. Whether she knew about the vocal and repeatedly expressed concerns over the plans or not, she was negligent and guilty of being in dereliction of duty.

SAPS officials have been attending the hearings and taking notes. Mahlangu was negligent but it will be those cops, with their open dockets, who will decide if she must be charged with further crimes. It’s a crime to lie during an arbitration and at the very least Mahlangu should face perjury charges for her claims to have known nothing, seen nothing. DM