The misery of Israel’s 38,000 African asylum seekers and the dubious ‘third country’ solution 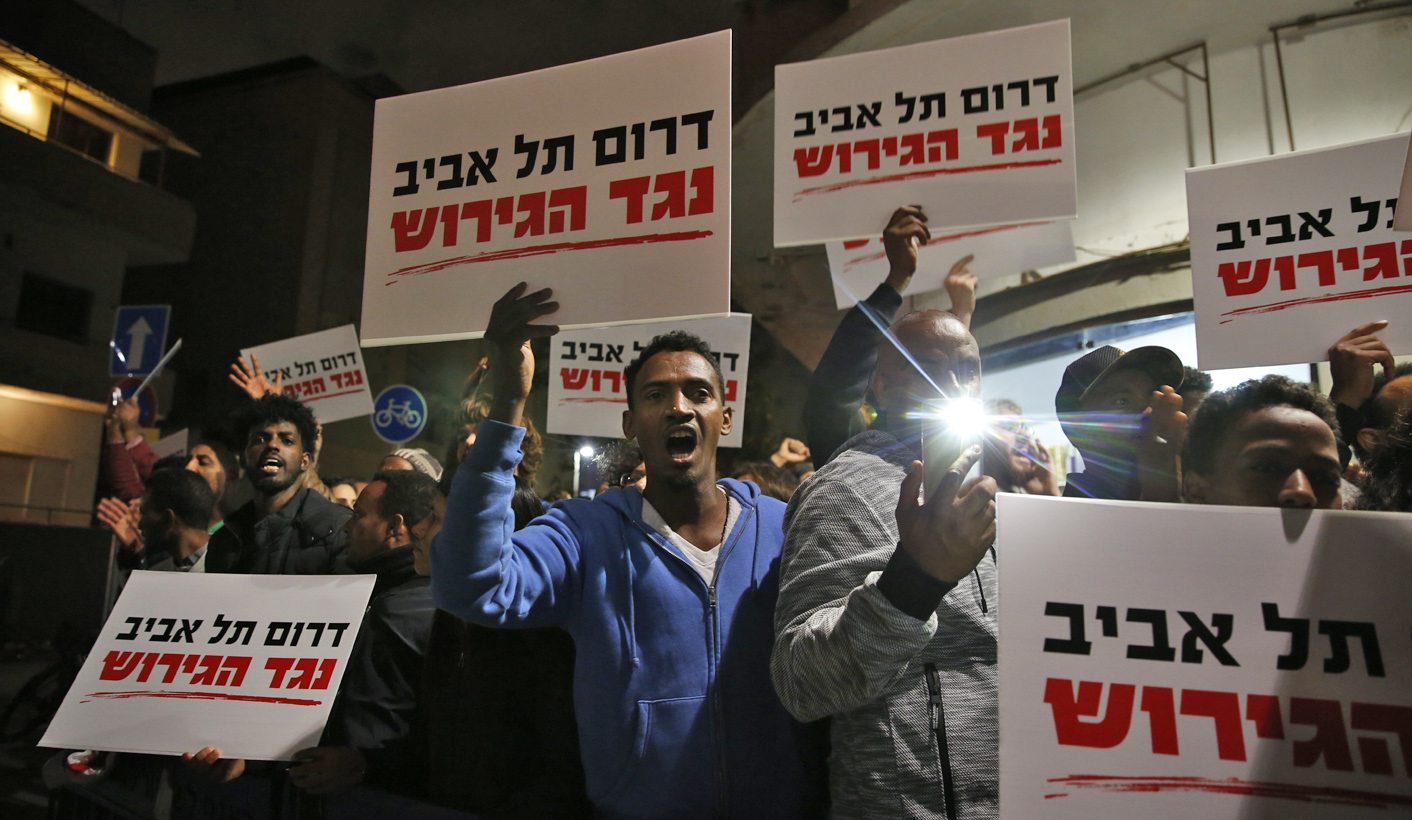 African asylum seekers living in Israel are being asked to choose between deportation or prison as authorities in that country crack down on “infiltrators”. But as several asylum seekers tell KRISTEN VAN SCHIE, it’s no choice at all.

Muhtar Awdalla was given a choice: Leave Israel, or go to prison.

It was early 2014 and the Sudanese asylum seeker had already wasted months of his life behind bars – in Libya, in Egypt and, when he finally crossed the border, in Israel.

Having fled the conflict in Darfur as a teenager in 2003, the whole point of the years-long journey was to find a better life.

“There were so many people crossing to Israel,” Awdalla said. “They said the country really respected human life.”

But when he arrived there in 2009, he found the experience “opposite – totally opposite”.

For eight months he languished in a detention centre. It took months more to get a temporary visa – he couldn’t work without one. Even when he got it, he couldn’t study. Dreams of becoming a lawyer stagnated as his 20s ticked by in restaurant jobs and Hebrew classes and days and days spent queuing to renew his papers.

When the ultimatum of detention or deportation was put to Awdalla, the authorities proposed Uganda as his final destination. They would cover his flights and organise his travel documents. He would even get $3,500.

“I didn’t want to go to prison and waste my time again,” he said. “I thought if I went to Uganda, I could finally study.”

He caught a connecting flight though Jordan and at some point on the second leg of the journey fell asleep. He woke as the plane was landing. A sign from the window caught his eye: “Welcome to Khartoum Airport”. Israel had sent him back to Sudan.

“I was shocked and disappointed,” Awdalla said. “I never expected to survive. I thought the Sudanese government was going to kill me.”

He was promptly arrested and his belongings confiscated. They even took the $3,500.

It’s stories like Awdalla’s that send shivers down the spines of the estimated 38,000 African asylum seekers living in Israel, mostly from Eritrea and Sudan.

In December 2017, the country announced a new plan of forced deportations of asylum seekers to “third countries” in Africa, if those countries agree to take them.

The community will have to choose between leaving, or indefinite detention.

But the announcement is just the latest move in what activists describe as a sustained campaign by the Israeli government of “making life miserable” for asylum seekers to convince them to leave.

“They have no status here,” explained Dror Sadot, spokesperson for the Hotline for Refugees and Migrants NGO. “They’re not granted refugee status. The government calls them ‘infiltrators’. They pay taxes but are not granted any social rights… all of Israel’s responsibilities and obligations to asylum seekers are just thrown out.”

Testimony from asylum seekers who left voluntarily have named the “third countries” as Rwanda and Uganda, though both have denied the existence of any “written agreement” with Israel.

Sadot says voluntary deportees have arrived in Rwanda or Uganda with no legal documentation – “no work permit, no status, nothing”. Many are robbed of the $3,500 granted to them by the Israeli government or quickly trafficked out of the third countries to join the migration route through Libya to Europe.

“We can monitor only those people who survive. They tell us about their friends who died at sea, who drowned next to them.”

Like Awdalla, some say they were not sent to a third country at all, but to the very war zones they fled.

The deportations haven’t started yet and will not apply to families. But Sadot said the panic in the community is palpable.

“It’s really hard. I mean, people are standing here in a line outside our offices. We’re trying to calm the communities, to send messages out in their languages to explain the situation. We’re trying to see what legal options we have.”

Asylum seekers from Eritrea and Sudan first began arriving in Israel in the mid-2000s, before the country sealed off its border with Egypt.

After years under “group protection”, applications for refugee status in Israel opened in 2013.

Since then, only 11 people – 10 Eritreans and a Sudanese man – have applied successfully. The rest are deemed economic migrants and blamed for the crime rates in poorer Tel Aviv neighbourhoods.

“Until today, I didn’t get a yes or no,” he said. “It’s important for us to know the answer – it could change our lives.”

Speaking to Daily Maverick, Suliman detailed a frustrating life lived in the limbo of detention centres and visa application queues.

Back in Sudan, before he fled, he was an archaeologist, specialising in Egyptian and Sudanese history. His political activism twice landed him in jail.

“I had to escape. If I continued, I could get arrested even more. Maybe killed.”

“But what can we do? Every year some new policy is coming…”

Still, given the choice between returning to Africa or a life behind bars, he would pick the latter.

“I miss Africa, but I’m not ready to go back,” he said. “Rwanda and Uganda are not my homeland.

“I don’t know what comes next. After what happened to us, you don’t have a plan any more. For some people life is clear. But for me nothing is clear.”

After 10 years in Israel, he doesn’t mince his words. There were the people who supported the asylum seekers, “people who know about human dignity and human rights”. But they were in the minority, he said.

“Even the people who are issuing you visas, they treat you like shit, like a slave. They don’t give a shit. They don’t think that you’re a human being like them, that you can suffer, feel pain.”

In November 2017, Israeli Prime Minister Benjamin Netanyahu spoke glowingly of Africa on a visit to Kenya.

“We believe in the future of Africa, we love Africa and I would like very much not only to co-operate on an individual basis with each of your countries but also with the African Union,” he said.

But just three months earlier, he promised to return the Tel Aviv neighbourhoods where many Africans live “to the citizens of Israel”. Asylum seekers like Michael were “not refugees”, Netanyahu said, “but infiltrators looking for work”.

“They treat us like animals and blame us for everything,” Michael told Daily Maverick. “They never loved us. They never will love us.”

So why stay in a place that didn’t want him?

Friends who had taken the deal were trafficked out of that country.

“Nobody actually stayed in Rwanda. Their documents are taken on arrival. They tell them to pay money for the hotel and money for the smugglers. Then they take them to the border.

“I don’t have any guarantee for my asylum claim, or for my protection. This is simply human trafficking.

“It’s better for me to stay here in prison than to go to Rwanda or Uganda.”

Muhtar did find his way to Uganda eventually – after a brother helped bribe him out of a Sudanese prison.

At 29, he’s now a third-year law student and president of his university’s law society.

“It’s an incredible feeling to finally be following my dreams,” he told Daily Maverick.

He misses Israel. He misses his friends there. But he plans on using his degree to sue the government for what it did to him.

“They lied to me. They took me to a place I didn’t want to go, a place that could have ended my life… If you don’t take risks in life, you will never succeed. But if I knew they were were going to send me to Sudan, I would never have taken that risk. Never.” DM