De Lille announces new emergency water rations: ‘We have reached a point of no return’ 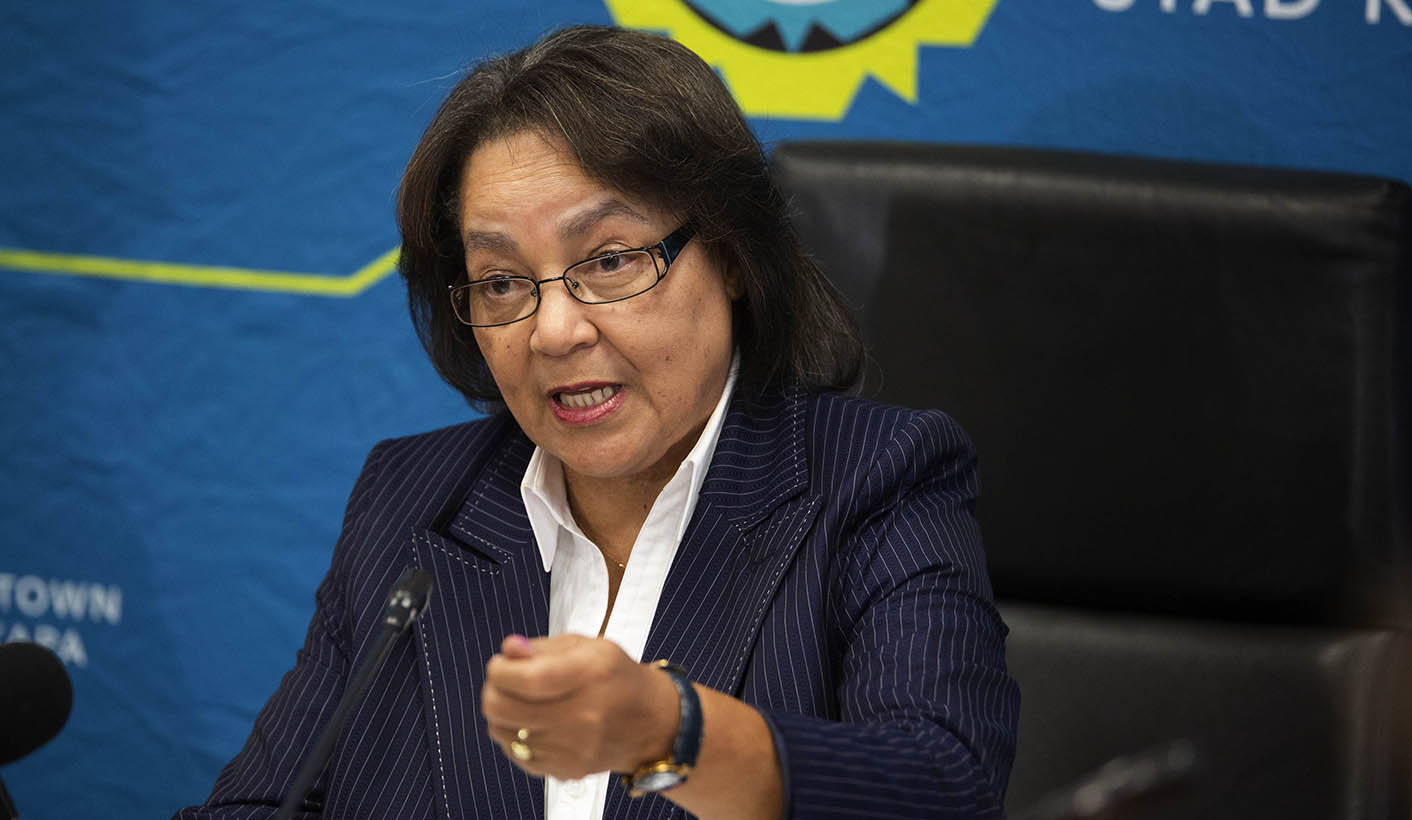 The City of Cape Town on Thursday took a drastic change of direction in its statement to residents of drought-stricken Cape Town. Mayor Patricia de Lille – who despite continued political battles remains in the saddle for now – said day zero was now “likely” and that the city was taking new emergency measures, including implementing Level 6B water restrictions from 1 February. By MARELISE VAN DER MERWE.

Cape Town will be moving to Level 6b water restrictions from 1 February, further curbing water usage by some 30-odd litres per person per day, with the city warning citizens Day Zero on 21 April was “now very likely”.

Despite Capetonians averaging together over 600 megalitres (ML) per day at present, the new daily collective consumption target is 450 ML per day, which will be in place for 150 days. This amounts to 50 litres per person per day. Irrigation use from boreholes and well points will also be further restricted.

A sombre Patricia de Lille addressed media from the Civic Centre on Thursday morning, telling journalists that since 60% of Capetonians were not complying with water restrictions, “we must now force them”.

De Lille underlined that Capetonians could not rely on augmentation measures as a solution. The city had ramped up the installation of pressure management devices, intensified the leak detection and repair programme, rolled out extensive awareness campaigns and begun implementing the use of treated effluent to offset the use of drinking water. They were also “working around the clock” to deliver emergency plans for desalination, groundwater and more treated water. But, said spokesperson Zara Nicholson, avoiding Day Zero lay in residents’ hands. “Our behaviour influences pushing that day forward or back,” she said.

“We have reached a point of no return,” the mayor added. “The people still abusing and wasting water seem to have it in their minds that Day Zero just can’t happen or that the city’s seven augmentation projects – set to produce around 200 million litres per day – will be enough to save us. This is not the case.”

While augmentation projects were intended to make Cape Town more resilient in the future, she added, they “were never going to be enough to stop Day Zero”.

“I will personally fight to ensure that the proposed punitive tariff exempts those who are using less than 6,000 litres per month,” De Lille said. Provision will be made for households larger than four people, who can apply by contacting the city at water.capetown.co.za or at their nearest walk-in centre.

The drought charge, however, was likely to be dropped, she said, after “massive outcry from Capetonians that it was unfair”.

“I understand that response and it has personally been a tough lesson for the city. I just want you to know that the city proposed the charge because we wanted to keep delivering important and essential services during this crisis… we are now going to have to make deep cuts to important projects,” De Lille said. Which projects would be affected would be announced at a later stage.

At the weekend, the DA Federal Executive said it would be stripping the mayor of her water-related responsibilities, a decision she said at the ytime was “disappointing”. On Thursday, however, De Lille said she had sought legal advice and was mandated to continue in all areas of service delivery. She would be carrying out her duties as normal until further notice.

From next week, said De Lille, posters and other communications would be circulated in communities with locations, hours and other specifics, in order to prepare residents for the practicalities of getting their water from collection points.

According to Councillor Xanthea Limberg, the city was ironing out logistics regarding, among other things, potential fraudulent collection of water. “Every community will be allocated a site and the information will be shared,” she said. Part of the report going to council on Friday will be the discussion of a possible Level 7 tariff at collection points, meaning residents will still be charged for water and those managing the sites will “try to assess some form of identification to ensure no fraudulent or excessive collection”. The city was also trying to procure the necessary equipment to help residents with water collection and transportation, she said.

Recognising the potentially massive impact on business and industry, Limberg said the city would attempt to keep water flowing in the CBD area, where many businesses are located. Informal settlements, too, would likely be spared “because many are currently operating as a water collection point already”. For the many businesses outside the CBD, however, it remains crucial to avoid Day Zero – and Limberg acknowledged dry taps would have a catastrophic economic impact.

She further acknowledged: “The reality is that the logistics are extensive and extreme. Therefore we want to be able to avoid these measures. We have the ability and the power to do so.”

De Lille said it was the “primary aim” of the city to avoid Day Zero at all costs, alluding only briefly to the political battles in city offices. “This is about the provision of water, and should not be politicised in any way, as we have seen in recent days. While politics may be playing itself out in a range of other matters, water is the one thing where we cannot play politics.”

Somewhat optimistically, given that only 40% of Capetonians are complying with the current, less stringent water restrictions, the mayor said residents had previously risen to the occasion when issued with a “clarion call”. “I’m sure this time will not be different,” she said. For the sake of individuals and businesses who cannot afford to lose hours each day queueing for water, let’s hope she is right. DM

Photo: Cape Town mayor Patricia de Lille addresses a media conference on Thursday, 18 January, 2018. “The people still abusing and wasting water seem to have it in their minds that Day Zero just can’t happen… This is not the case.” Photo: Leila Dougan