GroundUp: In photos – protests and violence at Afrika...

GroundUp: In photos – protests and violence at Afrikaans high school in Gauteng 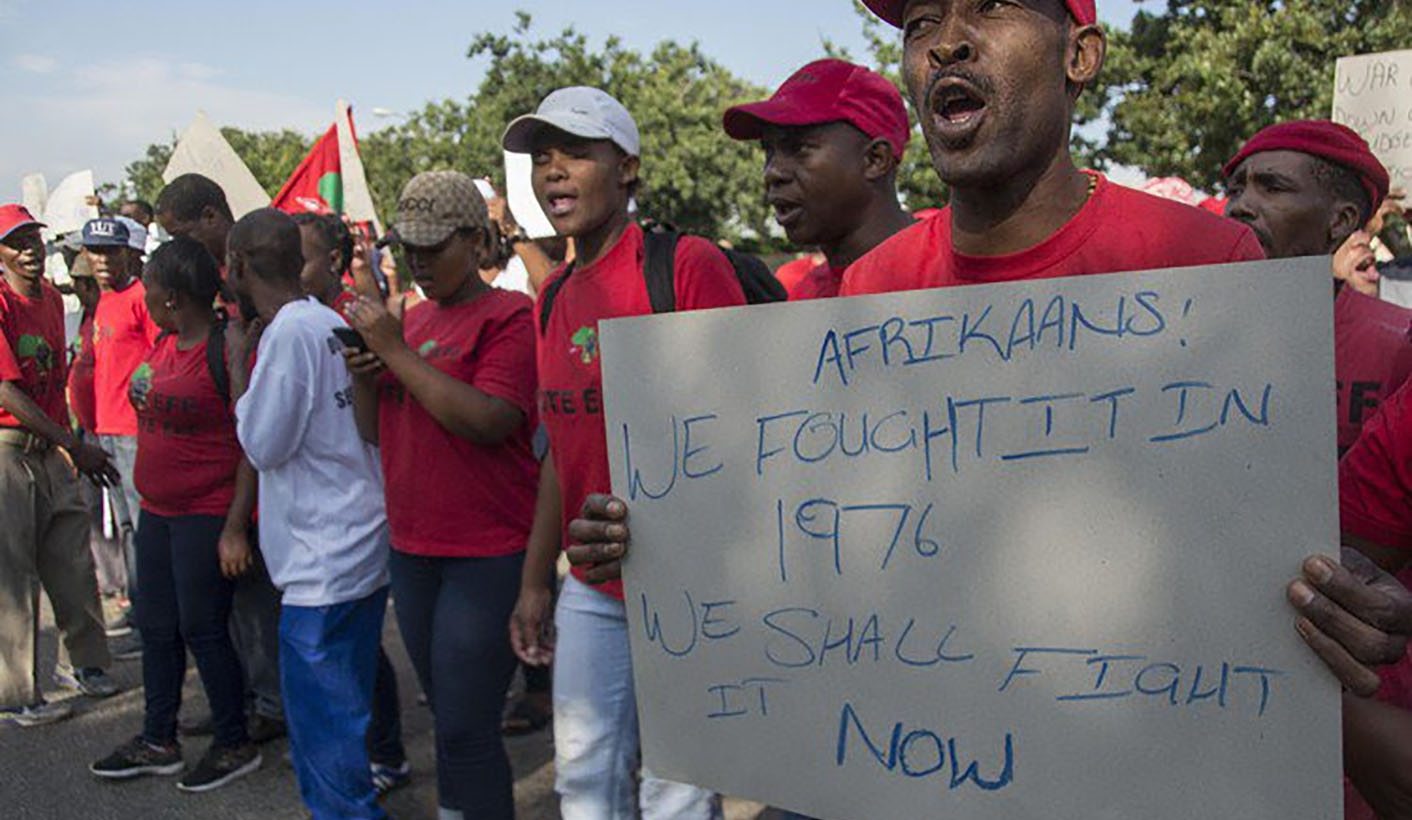 The first day of school for students at Hoërskool Overvaal was marked by protests and violence. The Afrikaans-medium high school in Vereeniging has been in the spotlight after a court ruled that the school can refuse admission to 55 English-speaking learners. Gauteng Education MEC Panyaza Lesufi says his department will appeal the judgment. By GROUNDUP REPORTER.

Protesters were sent scattering for cover as a large contingent of riot police fired rubber bullets and stun grenades to disperse demonstrators at Hoërskool Overvaal, an Afrikaans-medium high school in Vereeniging.

Police made several arrests while paramedics worked frantically to treat injured protesters. A man hit by a rubber bullet from close range held his face as he bled from the back of his head while a woman begged for assistance after being shot in the arm and back. Paramedics treated both protesters and ushered them into waiting ambulances for further treatment.

The day began with a small but vocal group of protesters demonstrating outside the school entrance as learners began making their way into the school. Police were already on high alert with several vehicles on the scene and at least two nyalas.

Photo: Police hold a briefing on how to deal with the situation.

The protesters consisted of EFF, ANC and some civil society groups who claim that the school is using its language policy as a means of excluding black pupils. The EFF’s Azwi Tshitangano told GroundUp that the protest was about discrimination against black learners on the basis of language.

“This school is the resource of our country and it belongs to our government through us who are taxpayers. As the EFF we are saying that we are going to fight this kind of racism wherever it presents itself,” said Tshitangano. He claimed that parents of black learners who lived near the school were forced to take their children to schools 15km away because Hoërskool Overvaal refuses to accommodate English-speaking learners.

Parents looked on nervously as they dropped off their children. Protesters were kept away from the entrance by a line of riot police as they continued singing and demonstrating. One parent was involved in an altercation with a group of EFF supporters and a scuffle ensued. Police intervened and escorted the man inside the school, away from the demonstrators.

A parent of a Grade 9 pupil spoke to GroundUp but asked that she not be named. She said that the protesters wanted to ruin the school and that they, along with the government, were targeting the school because they want to get rid of Afrikaans as a language of instruction. “There are other English language schools in the area. Why don’t they send their kids there? This is just an attack on Afrikaans and the school should stand its ground. This has nothing to do with racism. It’s just about the language,” said the parent, who expressed concern for the safety of her child inside the school.

The protesters had earlier agreed to disperse as the day wore on but the arrival of a group of ANC members later in the day heightened tensions. They began lighting tyres and blocking the entrance as the time for the learners to go home approached. Police responded by dispersing the protesters with rubber bullets and stun grenades and arresting some protest leaders, one of whom was carrying a gun. The crowd dispersed and police kept a close watch to ensure that they did not regroup.

Photo: This protester continued to cover his face after setting tyres alight.

The children were sent home through a back gate which was manned by armed private security, as parents arrived to collect their children. Some demonstrators indicated that they would be returning on Thursday to continue the protest.

Gauteng MEC for Education Panyaza Lesufi has appealed for calm and noted that the legal process is still unfolding.

Photo: Two protesters sustained injuries after being shot by rubber bullets at close range by police.

The 55 pupils who were denied entry into Hoërskool Overvaal have been accommodated at the Riverside High School about 15km away until legal proceedings are finalised.

The school had not replied to a request for comment by the time of publication. DM

Photo: EFF members protested outside Hoërskool Overvaal over it being an Afrikaans-only school.