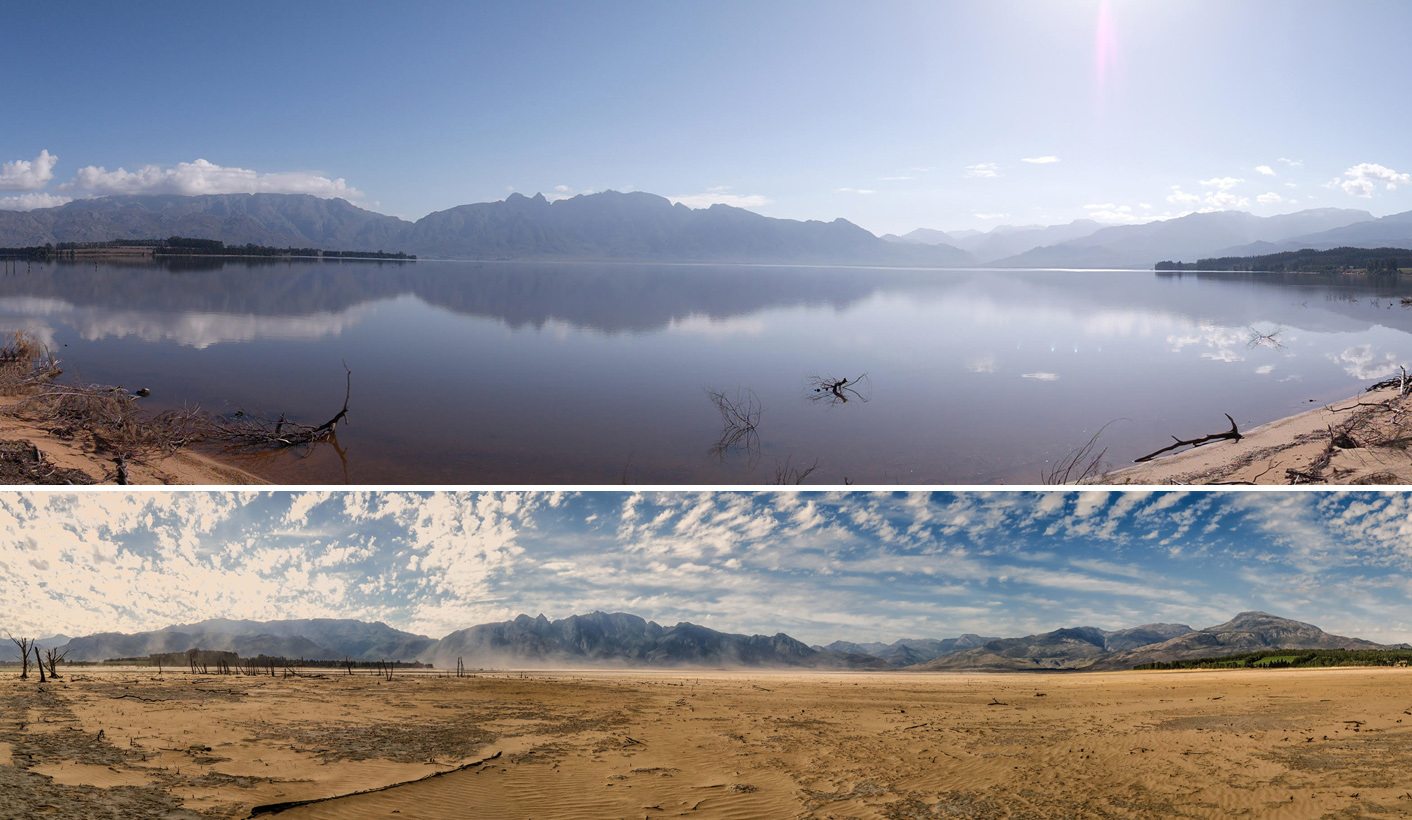 Lies, misinformation, genuine errors and conspiracy theories about the Cape water crisis are all circulating busily on social media. The reality is scary enough without the fake news, as recent pictures of the Theewaterskloof Dam show. When conditions are optimum, a full Theewaterskloof holds more than half of all the water in the Western Cape water system. It has just under 16% of its capacity left – of which around 10% is probably unusable. By REBECCA DAVIS.

In July 2014, the Cape Fold mountains are mirrored in the generous waters of the Cape’s biggest dam.

By January 2018, there is no mountain reflection in the dam, because there is no water visible in the frame. Brown, cracked earth now stretches as far as the eye can see.

“There’s no doctoring [of the images],” Gordon told Daily Maverick. “This is what it looks like. It’s horrifying.”

Theewaterskloof is one of six dams which together contain 99.6% of the Western Cape Water Supply System. Theewaterskloof is the largest by a considerable margin, with the capacity to hold 53.5% of all water in the system by itself.

That’s when it’s full. As of this week, Theewaterskloof is down to 15.9% capacity.

The City of Cape Town warns, moreover, that because “the last 10% of a dam’s water is difficult to use, the usable water in the dam is approximately 10% less than than the dam level”.

The issue of the Western Cape dams has been fraught with confusion as the water crisis intensifies. This was exacerbated by the release in early January 2018 of a video made by two bloggers which purported to show that at Theewaterskloof, “millions and millions of litres of Cape Town’s precious water – in the midst of the worst drought in history – are being purposefully released downstream”.

The Western Cape dams fall under the control of national government rather than provincial authorities.

Department of Water spokesperson Sputnik Ratau confirmed to Daily Maverick that water is being released downstream through the Theewaterskloof sluice gates, at a rate of approximately 130,000 cubic metres per day.

This has to be done because the Theewaterskloof water is “allocated between urban and agricultural users”, Ratau explained. Some of the water released through the sluice gates is for the irrigation of farms in the area.

“The total restricted allocation from Theewaterskloof for agriculture is 47.5 million m³, of which 12.7 million m³ is scheduled” (for release downstream through the sluice gates), Ratau said. “The rest is used in the Berg River catchment and for users around the dam.”

The water being released is thus not the result of broken sluice gates, as some have suggested, or an uncaught error in the system. Nonetheless, the amount of water being used for agricultural irrigation in the Western Cape remains a controversial matter as Day Zero approaches.

The issue of evaporation from the Western Cape dams is also a hot-button topic among the public, with many questioning why the dams are not being fitted with some form of covers.

One challenge is the size of the dams, and another is climactic conditions including wind.

Ratau says that measures are being taken to deal with evaporation, including “shifting the demands [of the City of Cape Town] to the fuller dams”.

Globally, methods taken to prevent evaporation have included releasing plastic “shade balls” into reservoirs in California. But these balls have been found to be both prohibitively expensive and environmentally unsound.

Conspiracy theories abound, meanwhile, at the sight of certain Western Cape dams – like Upper Steenbras – which appear to be surprisingly full.

Indeed, the latest dam water figures show that the Upper Steenbras dam is still at 90.6% of capacity.

The City of Cape Town explains, however, that Upper Steenbras receives water transfers from Lower Steenbras, Rockview Dam and the Palmiet River.

“The City carefully manages our water supply and currently maximises water stored in Upper Steenbras Dam as it provides for distribution over a wide area,” the City explains.

For those hoping that Upper Steenbras may eventually be the answer to Capetonians’ water prayers, bad news: the dam holds less than 4% of the water in the Western Cape Water Supply System. DM