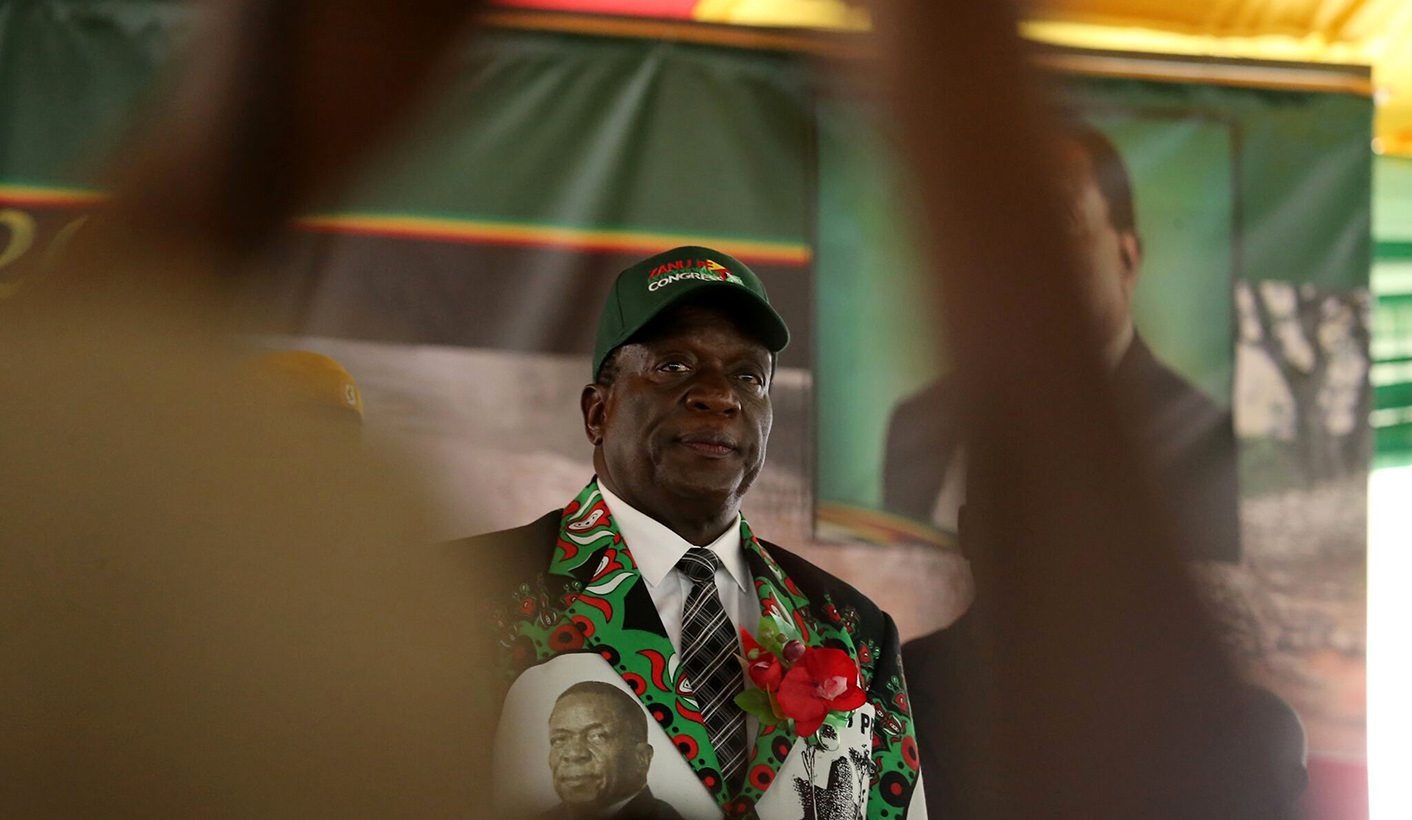 The ball is now in new President Emmerson Mnangagwa’s court to either follow in former Robert Mugabe’s footsteps as a despotic ruler, or bring closure to the 1980s Gukurahundi mass killings in Matabeleland. By SALLY NYAKANYANGA.

From the time Zimbabwe’s new President Emmerson Mnangagwa was sworn into office late in 2017, after taking over from the long-serving Robert Mugabe through military intervention, victims and families of politically inclined violence in the post-independence era have waited for his actions towards reconciliation and justice.

Mnangagwa’s predecessor left without addressing the atrocities. Hence the ball is now in his court to follow in the former statesman’s footsteps or bring closure to the atrocities. The 1980s Gukurahundi mass killings in Matabeleland, after Zimbabwe got its independence from the colonial regime, marked the beginning of politically motivated violence in the post-independence state.

Gukurahundi, a Shona word that explains the early rains that remove the chaff, is a period of a series of disturbances that took place in Matabeleland and Midlands just after independence, resulting in the death of thousands of civilians. While the number of people who died is still unknown, estimates point to between 10,000 to 20,000 perishing as a result.

However, no one seem to take responsibility for the brutal acts that saw thousands losing their lives. The new Head of State has been condemned for being the chief architect and mastermind of the Matabeleland massacres but, in an interview with the New Statesman in 2016, Mnangagwa denied the allegations.

“How do I become the enforcer during Gukurahundi?” he asked. “We had the president, the minister of defence, the commander of the army, and I was none of that. My own enemies attack me left and right and that is what you are buying,” Mnangagwa told the New Statesman.

The senior researcher and consultant, Derek Maryszak at the Pretoria-based Institute of Security Studies (ISS) said “Mugabe was the chief architect of the Matabeleland Massacres, in a bid to provoke a civil war in order to eliminate former Zimbabwe African People’s Party (ZAPU) leader Joshua Nkomo and his party.”

The crack Fifth Brigade that carried out the Gukurahundi campaign is said to have reported directly to Mugabe, the then prime minister who became an executive president when the constitution was amended in 1987 after a unity agreement between the ruling party, the Zimbabwe African National Union Patriotic Front, Zanu PF and PF Zapu.

The special Korean trained military unit was under the command of Perrance Shiri who left his post as Air Marshal when Mnangagwa was inaugurated as president and took the post of agriculture minister.

As it stands, Zimbabwe’s Head of State seems to be pointing to redress of the violence, as over the weekend, on his Facebook page, he mentioned the need for justice and reconciliation to pave the way for development in the country.

“There should be justice and national reconciliation because we cannot progress when communities are in conflict,” his statement reads.

However, despite such uniting and seemingly right statements, the new administration has since arrested Bulawayo-based Mthwakazi Republic Party youths and later released them for demonstrating against President Mnangagwa’s involvement in the Gukurahundi mass killings last year.

As the country heads for an electionon later this year, violence, threats and intimidation has marred the electoral process. Despite the majority of Zimbabweans expecting free and fair, violence-free elections, this could be a far-fetched dream.

This was responded to through a tweet by the European Union Representative to Zimbabwe, Phillip Van Damme, who wrote: “If really what he said needs public condemnation by Zanu-PF leadership intimidation incompatible with commitment to free and fair elections.

Breaking the Silence – Building True Peace – a report on the Disturbances in Matabeleland and Midlands in the 1980s-1988 by the Catholic Commission on Peace and Reconciliation (CCJP) and the Legal Resources Foundation (LRF) cites that:

“Only when those who inflicted untold hardships are prepared to acknowledge that they did so, can a lasting reconciliation take place between all who live in Zimbabwe. Only can bitterness and fear be finally erased.”

“Gukurahundi was not an accident but was meticulously planned with those in power during the time with the aim of destroying ZAPU as an opposition and in carrying out it spilled to innocent people,” Dabengwa said.

The Gukurahundi survivor spent more than four years in detention at the biggest prison in the country, Chikurubi Maximum Prison, even when they could not find evidence against him committing the crime. Then, the state of emergency put in force in 1965 was used against Dabengwa’s further incarceration was only removed in 1990. Other ZAPU members who were cabinet ministers in the post-independence government, were sacked, forcing the then ZAPU leader the late Joshua Nkomo to flee the country into neighbouring Botswana and then the UK for safety.

Dabengwa stated the need for closure on this matter. “People of Matabeleland have not yet had closure for their relatives who perished during the massacres. As a party we also lost not only properties but our having our documents of history taken from us during the period.”

Academic Oswell Hapanyengwi-Chemhuru, in his research entitled Reconciliation, Conciliation, Integration and National Healing: Possibilities and Challenges in Zimbabwe, said that victims of the liberation struggle and Gukurahundi, as well as of the election periods, especially in 2008, have not told their stories.

He argues that the truth continues to be swept under the carpet for victims of these politically motivated violence by those who yield power. This has been the case in the 2008 elections, where many died, disappeared, tortured, maimed, and raped for supporting the opposition Movement for Democratic Change (MDC).

According to the Human Rights Watch (HWR) report entitled Zimbabwe: Perpetual Fear – Impunity and cycles of violence in Zimbabwe mentioned that violence towards elections intensified since the formation of the Movement for Democratic Change, which emerged as a strong political contender to Zanu-PF in 1999.

Reports of violence against members of the opposition were widespread, with perpetrators not held to account for the brutal attacks. This was a period where political differences were not tolerated, as such due to fear people would pretend to belong to the ruling party for security reasons.

“During the general elections and presidential run-off in 2008, widespread atrocities by the military, state security agents, war veterans, and Zanu-PF supporters, including the killing of at least 200 people and the beating and torture of 5,000 others,” read the HRW report.

The 2008 elections saw a repeat of what had happened to ZAPU,with the 2009 marriage of convenience (known as the Global Political Agreement) not helping either. Instead, it strengthened and revived Zanu-PF as they came out as victors in the 2013 elections.

Researchers have pointed out that for reconciliation to succeed, both victims and perpetrators of conflict and violence have to be at the centre of reconciliation, national healing and integration activities

It’s clear, the 1987 unity accord, did not bring any lasting peace but rather a forced agreement, whereby the weaker ZAPU had to give in to stop the mass killings. The Gukurahundi issues has never been dealt with as two reports by government remain suppressed.

‘Mugabe and the ruling party have never acknowledged the atrocities. A full truth and reconciliation process is required, with truth-telling, remembrance, reburials, and reparations to deal with the issue,” says Matyszak.

Dabengwa clearly stated that there is need for public apology from those representing government of the day to kick-start the redress.

“There is need to release the two commissioned reports, the Dumbutshena and Chihambakwe reports, which decades later their findings are still unknown despite public funds having been used to incur the costs for the reports,” Dabengwa said.

“The reports are key as they are a compilation of exactly what happened when the people (victims and eye-witnesses) gave evidence whilst it was still fresh in their mind,” says Dabengwa.

After delays, the National Peace and Reconciliation Act was recently signed by the president enabling the National Peace and Reconciliation Commission to carry out its mandate. The NPRC, which is only operational for 10 years, is left only with five years. The question remain, will they be able to put to closure cases dating back from 1980? As it stand there is no cut-off period, it will be seen whether they will begin from a period after independence.

Hapanyengwi-Chemhuru advises that Zimbabwe should observe and analyse other peace and reconciliation processes in the region and elsewhere.