Stay of execution as De Lille faces 60 days of scrutiny

Stay of execution as De Lille faces 60 days of scrutiny 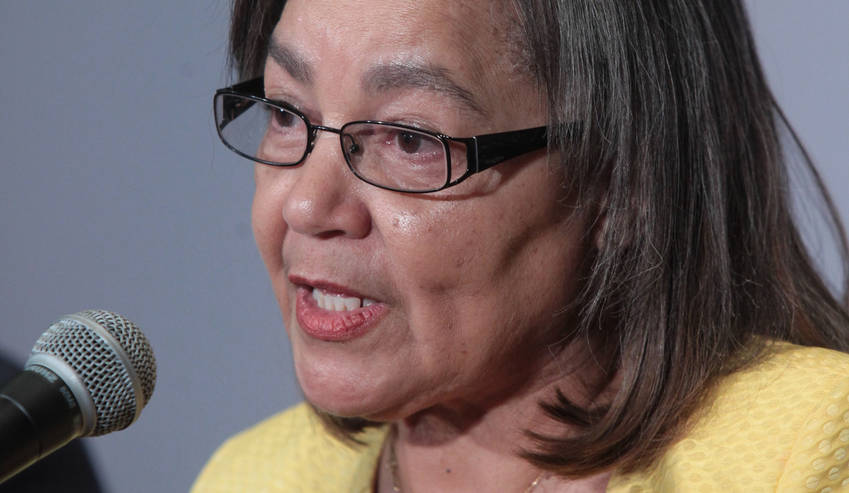 Beleaguered Executive Mayor of Cape Town Patricia de Lille received a heavy smackdown at a press conference held in Cape Town following a meeting by the DA’s Federal Executive on Sunday. She did receive a temporary stay of execution, however: she has not been axed, but will be formally charged. Expect another wait. By MARELISE VAN DER MERWE.

The tensions between Cape Town Mayor Patricia de Lille and her party, the DA, show no signs of letting up any time soon, with bruising criticism of De Lille reaching an all-time high at a press conference at the DA Federal Head Office in Cape Town on Sunday.

Party Leader Mmusi Maimane, National Spokesperson Phumzile van Damme and DA Federal Executive Chair James Selfe addressed media following an extended meeting of the Federal Executive in which they discussed De Lille’s submissions on why she should not be forced to step down as mayor.

The mayor has not been axed, but will be formally charged and investigated. The process is expected to take 60 days. This will overlap with a critical period during which Cape Town is counting down to “Day Zero” – the ever-shifting goalpost of when it may or may not run out of water.

In the meantime, management of the water crisis in Cape Town has effectively been taken out of her hands and handed to the deputy mayor and the Mayco members responsible for the water crisis. This, Maimane argued, was in part because De Lille’s hands would be full given that she was facing a time- and energy-consuming disciplinary process.

He added that the party would do all in its power to “expedite processes” so that more time than necessary would not be spent on resolving the issues between De Lille and the party.

In recent days, documents containing damning accusations against the mayor were leaked to media. One was a confidential report of an independent investigation by Bowman Gilfillan Attorneys, commissioned by the City Council. The other was a draft of a damning report by the subcommittee headed by parliamentary whip John Steenhuisen. It included accusations of an unnecessarily autocratic leadership style; that the mayor had, among other things, bullied or been abusive towards caucus members who were not aligned to the mayor and her team; that she had abused her position to influence staff appointments and/ or tenders, with unfortunate results; that she and the Speaker behaved inappropriately; and that her conduct had resulted in large financial losses. Speaking to media, Maimane reiterated this. The accusations against the mayor were not only coming from “one or two people”, he said.

Shortly before the meeting, De Lille described the allegations in the Steenhuisen report as “untested”. “I have asked time and time again for these allegations to be tested and to be charged if there is any evidence of wrongdoing on my part. To date I have not been charged with anything,” she said.

“This report lacks great substance and has not taken any of my responses countering the allegations into account.”

Regarding the DA Federal Executive’s meeting, she emphasised that they were “in possession of my substantial response to the allegations against me”. “I can only hope that this time my responses are given due and proper consideration, unlike my previous responses to the subcommittee.” She had “repeatedly asked for a fair process”, she added.

“It is a huge relief that justice prevailed today,” she said.

“I note the resolutions, which do not include a demand for my resignation, or allowing a motion of no confidence against me. I welcome the fact that the DA has taken the decision to formally charge me. It is disappointing that it took them so long.

“It is also disappointing that they are already stripping me of my powers, which they are not allowed to do in terms of my statutory duties before the disciplinary process has been concluded. All I was asking for was a fair chance to clear my name from the aspersions which were cast on my character.”

This follows an evidently furious statement on Wednesday 10 January, in which she accused the Federal Executive of issuing statements that did not represent the City of Cape Town DA caucus, “because they never met”.

The statement was “yet another example of the flagrant disregard for process within the DA in their rush to get rid of me and make Minister Bonginkosi Madikizela the next Executive Mayor,” she added, saying the “attacks” on her had been “about power and positions all along”.

The previous day, UDM President Bantu Holomisa had come out in support of De Lille, similarly arguing that she was being sidelined in order to make room for Madikizela.

Maimane denied all allegations of strategic placement in the strongest terms. He particularly took issue with claims that De Lille had been targeted for a pro-poor policy. “Our focus is always to put the people of South Africa first, and ultimately the people of Cape Town,” he said. “We reject the very notion that say one individual is responsible for the spatial integration of the City of Cape Town. This was a DA manifesto promise. It is derived from [our] policy… It is not that any action you take against any individual is a stance against this.”

Whether one is aligned to the mayor’s cause or not, however, two things did emerge. First, that Maimane lost no opportunity to get on the campaign trail, possibly recognising the potential damage to the DA and putting a more positive spin on the narrative. He was at pains to underline that the DA had spotted possible misconduct and jumped in to act decisively.

Second, that there was little clarity on what the future holds for citizens of Cape Town who may be the collateral damage if political infighting results in delays in management of the water crisis. (Craig Kesson, the controversial whistle-blower who has now threatened legal action against De Lille, was made the City’s first-ever Chief Resilience Officer, with an important role in management of the drought response, among other things.) Maimane framed the stripping of the mayor’s responsibilities with respect to water as a much-needed attempt to restore stability. It is possible, then, that a new narrative (whether accurate or not, time will tell) will emerge that was hinted at on Sunday: that if De Lille is a divisive force and is consequently removed, the water crisis will be more efficiently managed. That being said, asked where the management of the water crisis stood mid-storm, Maimane wavered. For citizens facing an unprecedented crisis, there’s no getting around it: there is no good outcome to instability at this time. There is, at best, only damage control.

De Lille, meanwhile, has received a stay of execution, and by the looks of things she’s not going down without a fight. According to the Federal Executive, she has filed charges of her own against other councillors, which have not been dealt with as yet. The Federal Executive has resolved to discuss these and other related matters – which they did not have the time to address on Sunday – in the coming week. DM