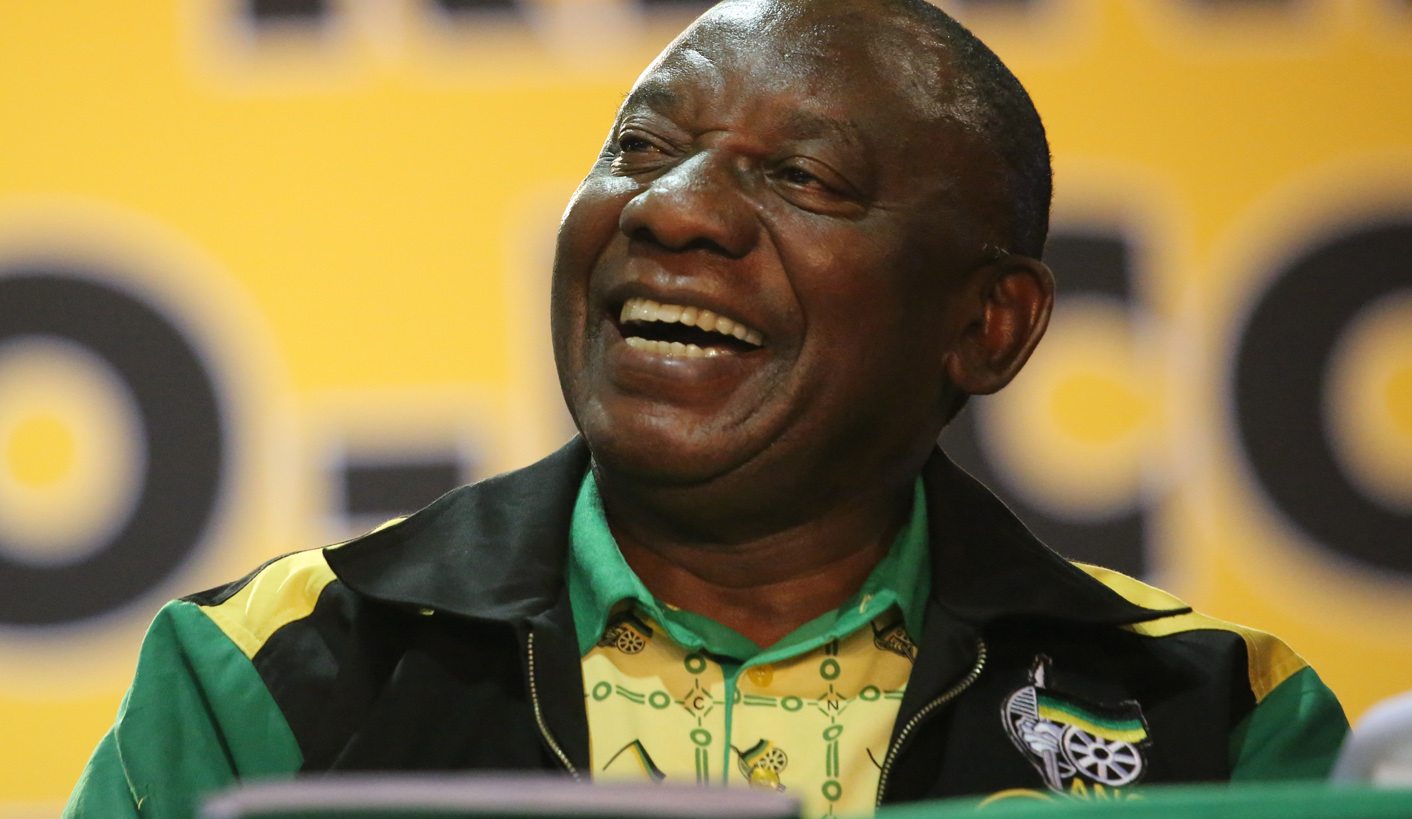 ANC president Cyril Ramaphosa has been setting the stage for a fresh attempt, mooted for next week, to force President Jacob Zuma out of office. Unity rhetoric has made way for some tough talk as he was warmly received by traditional leaders near former president Nelson Mandela’s home in the Eastern Cape. By CARIEN DU PLESSIS.

As Saturday’s ANC birthday rally draws closer, ANC president Cyril Ramaphosa is increasingly and visibly settling into the powerful position he’s been elected to – at least as far as rhetoric is concerned. Ramaphosa, as Zuma’s apparently compliant deputy, has often in the past been accused of lacking a spine.

He was even given a Xhosa praise name (Mpondo Zenyathi, meaning “buffalo horns”) by the AbaThembu, in reference to the “Buffalo” nickname he got a few years ago after news got out that he was bidding a few million for a bull.

On Thursday he told a room full of locals at the Bumbane Great Place near Qunu – the jailed AbaThembu King Buyelekhaya Zwelibanzi Dalindyebo’s spot – that the leadership elected at the ANC’s conference at Nasrec last month are “accused” of being divided, referring to the near 50-50 split in the national executive committee of people who were on Ramaphosa’s slate and those on fellow presidential contender Nkosazana Dlamini Zuma’s slate.

Ramaphosa has been preaching unity in what he’s spun as a diversity of viewpoints and skills.

“People say the leadership are so divided you are not going to be able to drive any programme through,” Ramaphosa said. “We are going to be driven by the policies of the ANC.”

It’s clear who he is referring to here, and the audience clapped and cheered knowingly, too.

Ramaphosa also talked about cleaning up state-owned enterprises. It’s not a secret that President Jacob Zuma and some of his loyalists have been using these as cash cows for many years.

At an earlier address in a multipurpose hall in Qunu, Ramaphosa told a small audience that those who stole money would be pushed out, and corruption would not be tolerated. Here, too, this news was warmly received.

It could be that he was setting the tone for an NEC meeting to take place next Thursday, where Zuma’s axing is likely to be discussed.

As we mentioned earlier, while some NEC members were keen to gun for Zuma at Wednesday’s NEC meeting in East London, Ramaphosa and ANC chairperson Gwede Mantashe reined them in.

It is understood that Ramaphosa and Mantashe argued that any possible recall of Zuma should happen after proper consideration and process.

Former president Thabo Mbeki was recalled on a wave of emotion following a finding by Judge Nicholson that he interfered politically in the prosecution of Zuma. The judgement was found to have been flawed later, but by that time Mbeki was out already and the party had splintered, creating a great deal of bad blood.

The ANC is not keen to repeat this mistake, but it’s clear that they could not put up with Zuma as the country’s president for the 18 months to complete his second term.

Such has been the fatigue that the former NEC – where the number of people wounded by Zuma was growing – couldn’t even muster an applause when Zuma, in his final speech at a meeting last month, said people shouldn’t take things that had happened in the party personally. Even at the Nasrec conference, the applause for him after his final speech was less than enthusiastic.

Next Thursday’s NEC meeting is expected to consider a report by the party on the implications of last month’s Constitutional Court judgement, and this will set the basis for a call on Zuma to step down. The court essentially ordered Zuma to comply with a recommendation by former public protector Thuli Madonsela to appoint a commission of inquiry into state capture – something he and his businessmen friends, the Gupta brothers, are implicated in. Zuma has put up a fight against Madonsela until his sudden about-turn on Tuesday night, when he complied, possibly to pre-empt any NEC discussion on the matter the next day.

This inquiry was also one of the resolutions of the ANC’s 54th conference. Could this be the policy Ramaphosa referred to when he said those who stood in the ANC’s way would be kicked out?

Ramaphosa has been uniting the hell out of the party (his intention appears to be not to unite good and bad, but to unite a critical mass of people who want to do good so that the bad ones no longer feel welcome), and by next week the power shift from Zuma, as a has-been, to Ramaphosa as future president, will likely be much clearer.

There are currently three options for getting Zuma out of the presidency: his stepping down voluntarily; the NEC pushing him to resign; or impeachment processes in Parliament. Rules for these are currently being drawn up and solidified.

The party also needs to consider the implications of pushing Zuma out – some staunch loyalists in the ANC Youth League and the uMkhonto weSizwe Military Veterans have been making threats, and there are some signs of parallel structures outside the ANC mobilising militantly in Zuma’s support, such as Black First Land First (BLF) and Transform RSA.

Party leaders are also not clear about what it is exactly that Zuma wants in return for stepping down. He already rejected ANC deputy president David Mabuza’s request in this regard this past weekend.

There is talk about Zuma wanting Dlamini Zuma – who was his preferred candidate for president – in the deputy presidency position should Ramaphosa take over, or perhaps in the position of KwaZulu-Natal premier. This province is set for a possible re-run of its 2015 conference after a court declared the process illegal and void, but it’s subject to an appeal right now. It could see them having to overhaul the provincial government leadership too.

This is all subject to negotiation, which means Zuma’s recall could happen fast or could take a few weeks, or anything in the middle, really.

Meanwhile Ramaphosa is doing his best to engender trust and to reach out to traditional leaders and communities – he needs these to win elections and to implement policies. He assured those gathered at Bumbane that the ANC would be renewed and resurrected:

He said, however, the party wanted to see the country move forward. “It is being held back by a number of things,” he said, to applause and knowing laughter.

Dalindyebo’s son, Prince Azenathi Zanelizwe, even has enough faith in Ramaphosa’s future leadership that he believes Ramaphosa would grant his jailed father a pardon.

In his speech on Thursday, the prince called Ramaphosa his De Klerk, in reference to how former Zambian president Kenneth Kaunda felt he could negotiate with former president FW de Klerk about Mandela’s release from prison.

A 31-year-old unemployed Qunu resident had faith in Ramaphosa in a different way. She said many in the community have been unemployed, and they hoped his leadership would bring them jobs.

The 8 January statement, which will be delivered belatedly on Saturday, is set to be full of rhetoric and promises to this effect. Their action next week will prove if this party can really move South Africa forward. DM