ANC’s 106th: At the last supper before the big speech, Ramaphosa preaches unity in diversity 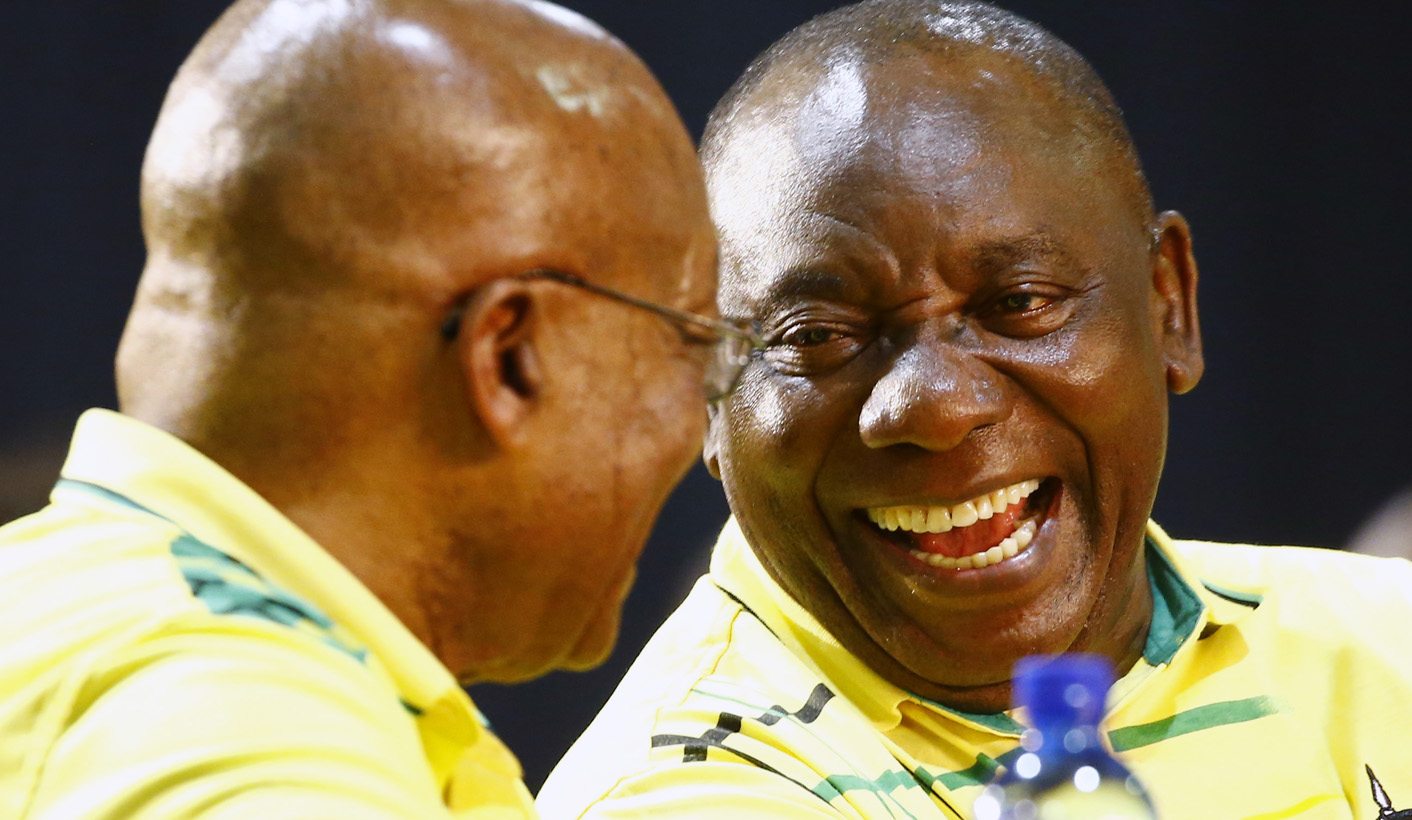 After a week of shaking the bones of the ancestors for blessings and inspiration, ANC president Cyril Ramaphosa is ready to serve up unity, more unity, renewal and even some policy at his first ANC January 8th birthday rally address in East London. By CARIEN DU PLESSIS.

Even as organisers tried to start on time with the traditional celebratory gala dinner programme in the East London International Convention Centre, Presidents Jacob Zuma and Uhuru Kenyatta from Kenya were slow to arrive.

Mistress of ceremonies Edna Molewa and host, ANC treasurer-general Paul Mashatile, started with the programme in their absence anyway.

The power is shifting, and this was also apparent in the way many Zuma loyalists failed to attract the usual hustle, instead sitting at their tables staring down at their phones, or looking around for old friends to reach out to.

Ramaphosa stepped onto the podium just as Zuma and Kenyatta arrived. They sat next to each other, joking and chatting, at a table behind the two main tables belonging to Ramaphosa and his deputy, David Mabuza.

Despite the contested outcome of the Kenyan elections last year, and despite previous cool relations, Ramaphosa extended a warm welcome to Kenyatta and called his Jubilee Party the ANC’s fraternal party.

Ramaphosa had a few ministers jumpy when he, in his greeting, welcomed the “ministers from President Zuma’s cabinet”. Zuma supporters have been trying to negotiate for some key ministers to be retained should there be a change of guard in Union Buildings any time soon. This sounded ominous.

Ramaphosa told the just over 1000 guests – businesspeople, ANC office bearers, party leaders, fraternal party leaders, and even former ministers – that he appealed to higher powers in the past week during a “revolutionary pilgrimage” to the graves of former ANC presidents. We were “shaking those bones” he said, explaining that it was a way of bringing alive the spirit of those who had departed.

“We saw this pilgrimage as a way to rekindle the spirits of our former leaders, and as we were there, we felt we were in hallowed ground,” he said, giving a rundown of the names of the former presidents usually only evoked in speeches.

It’s clear that he went there to draw inspiration and courage for his task ahead, which is likely to include removing Zuma from the SA presidency.

Zuma, who had in previous years told voters that the ancestors would not forgive them if they didn’t vote ANC, must have been moved by Ramaphosa’s ancestral visits in some way. It really is his thing, as are the traditional leaders, who Ramaphosa also paid close attention and visits to in the past week.

All this is about renewal and unity in the party, but also in the nation, with Ramaphosa as the project manager.

He has been spinning the party’s new leadership, which is almost evenly divided between the camps of Ramaphosa and fellow presidential contender, Nkosazana Dlamini Zuma, as one with a diversity of skills and viewpoints.

He said the delegates at the ANC’s conference who voted for these “created an architecture of people, and they drew them together and mashed them together to say ‘we want you to work as a unified leadership to achieve our objectives’.”

He also threw in a naughty aside about perspectives on the ANC, and how a mountain looked different depending on which side of it you stood.

Again, Zuma must have twitched a little at hearing this.

Ramaphosa then reminded that it wasn’t just about unity in the ANC, but also about healing divisions in the country. “8 January 1912 is not just the birth of the ANC, but also the birth of a nation,” he said, about regeneration, and the recreation of a new type of non-tribal loyalty which was inherently anti-colonial. This again is a swipe at Zuma’s ANC, which was heavily centred around Zulu nationalism and traditionalism.

Some, like Police Minister Fikile Mbalula, speak at a high decibel, some, like ANC secretary general Ace Magashule, at a lower decibel, and some, like himself, in the middle, Ramaphosa said. “We are all different, and that is the beauty of the leadership that were chosen at this conference.”

ANC leaders were on Friday tight-lipped about what exactly would go into the January 8th statement that Ramaphosa would deliver on Saturday. It’s clear, though, that he would use unity – in the party and in the country – as a basis for the ANC’s policies and plans for the year. DM