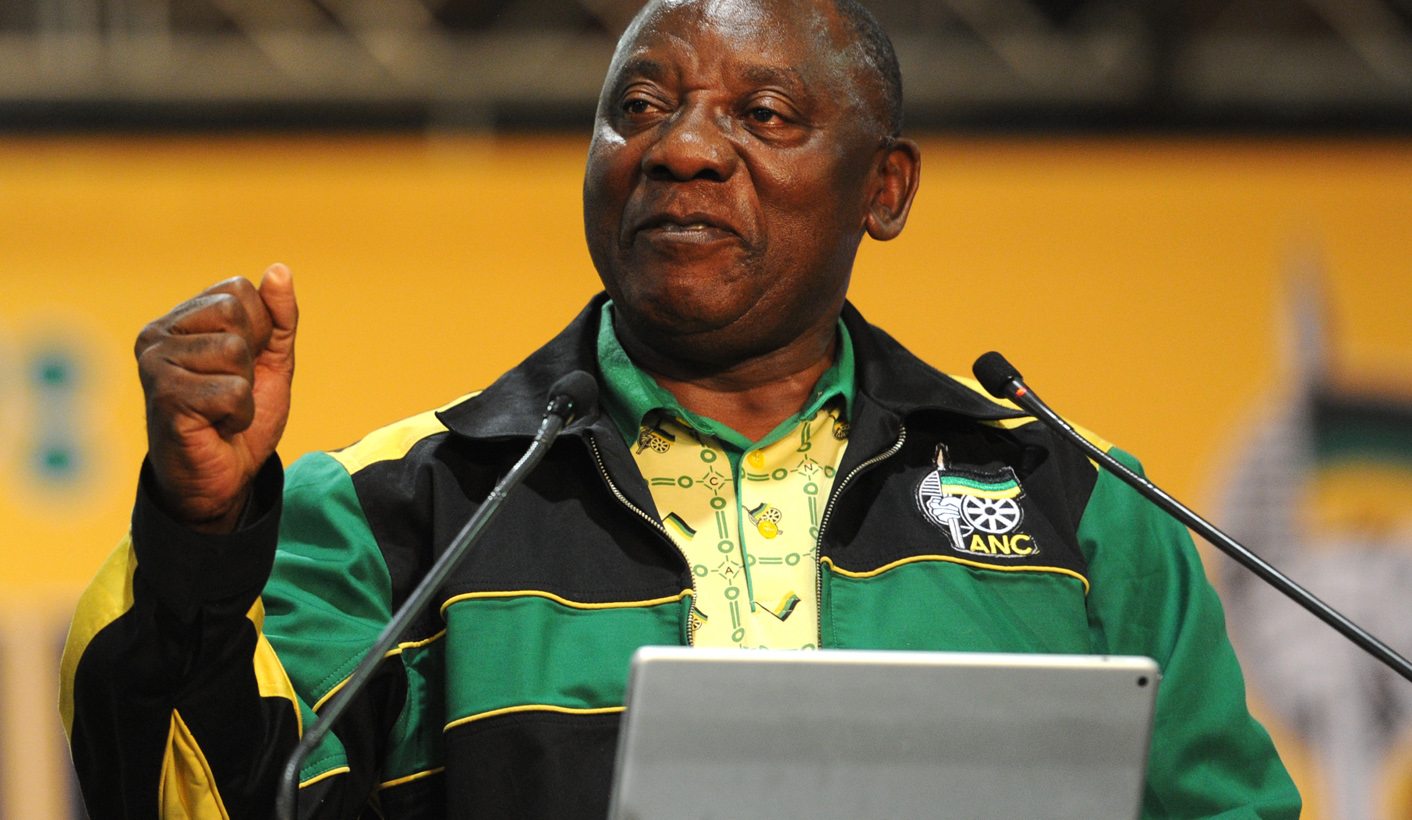 When South Africa's Deputy President Cyril Ramaphosa stands up to give his first January 8th Statement as leader of the ANC, he will face a set of contradicting issues. To give a better presentation, something both more meaningful and more engaging, than his two predecessors is not terribly difficult, but there are also high expectations in the long-suffering society which he may not be able to meet. On top of it, much has already changed since Nkosazana Dlamini-Zuma lost the ANC’s leadership contest, and much more is still likely to change over the next few weeks and months. By STEPHEN GROOTES.

This reporter first started reporting on the ANC during the tail-end of Thabo Mbeki’s presidency, early in 2007. He was still leader of the ANC one hot, and then rainy Saturday in Emalahleni, when he delivered his last January 8th Statement. It was probably the last time such an ANC event was held in a small and intimate stadium; the following year it was in Gauteng, and after that the World Cup meant that all the stadiums around the country were suddenly world-class, and massive. Already then, the roots of the tensions we all felt last year – the factionalism, the multiple interests, the competing priorities – were raising their ugly heads. Zuma and Mbeki walked in together, to ensure one didn’t get a better welcome than the other.

To a young reporter, Mbeki’s speech was quite bewildering. It was some time before I realised it wasn’t because of my lack of experience. By 2007, Mbeki’s name was known around the world for his AIDS denialism, and his distinct lack of enthusiasm for ordinary people was almost equally well-known. His speeches were famous for being impossible to understand, his quotes were lengthy, seemingly failing to make a point, so often devoid of news value.

It’s easy to blame journalists for demanding an “angle” or a “top-line”, but the fact is if you don’t give them that in a speech, it means you haven’t made a point that people, those whose votes you’re actually seeking, will hear and feel. In other words, you’re missing your audience if even those who follow politics professionally can’t find something interesting in it.

Zuma’s first January 8th Statement, just weeks after Polokwane, was marred, amazingly, by problems with the sound. The SABC was blamed for the problems, and the Group CEO of the SABC promised to investigate. In case you’ve forgotten, and in an indication of how much has political landscape changed in the last decade, that SABC CEO’s name was… Dali Mpofu.

Zuma’s prepared speeches in English have always been criticised for their delivery. They were long, often incredibly boring. They have never been a political priority for him, and so he didn’t bother putting in any effort.

And man, it showed. Over time, it became obvious that he was hardly ever going to say anything interesting during a January 8th Statement. Once, in a session where journalists were invited by the then-secretary general Gwede Mantashe to report back on how they had covered an election campaign, a journalist from a Sunday newspaper confessed that they had not been able to find a reason to include Zuma’s speech, which doubled as an election manifesto launch, on the front page. Imagine that. The President of the country giving the most important party political policy speech of the year, and yet they could not find a reason to publish it on the front page the next day.

It got worse from there. A radio talk show host once started her show by asking who had watched the people speaking before Zuma and then left the room once he actually started. The response was immense. Hilarious, too.

Ramaphosa is rather different from both Mbeki and Zuma. He speaks much more directly; none of the talking around the subject for him. He uses an iPad, something that will resonate with many voters in a country where nearly two-thirds of the population spend most of their lives in urban areas. He also gives the impression that he is much more comfortable in front of both live audience, and on radio and TV. This is much more important than it used to be. Something that must surely have shifted over the years is that more and more South Africans are getting their politics through the media, rather than through their ANC branch.

There is something else that is crucially important here.

Imagine, for a moment, that you are someone who was not an ANC card-carrying member, but have identified with it for over twenty years. That you are incredibly grateful to the party for the way they liberated you, and that you feel a bond that is about history and identity and language, and in some ways, your very being. Now, imagine watching that organisation being led, first by someone who denied that AIDS was killing the people around you, and then by someone who appears immoral and corrupt beyond imagination.

Now, consider the fact that Ramaphosa, apart from, arguably, Marikana, has no major scandals to his name. Mbeki came to office clean, then he used the National Prosecuting Authority against Zuma, and got stuck on AIDS. Zuma came to office already facing well-founded claims he was corrupt. Surely you would be incredibly excited, you may feel that the movement that means something to you has a second chance on life. That it has, to use the political term, self-corrected. That it is…renewed.

It must be an incredible feeling. And something Ramaphosa can obviously use to his own advantage.

There are already signs that he is doing this. On Wednesday morning he suddenly appeared on the boardwalk in East London going for a stroll/jog. He stopped and had a selfie with anyone who asked. Later, after the national executive committee meeting, he went for another stroll, and spoke to anyone who asked.

This is something entirely different to what has become the norm. Zuma refused to move anywhere without a massive security detail, even during the period after he was fired as Deputy President and before he became President. It has often appeared that this detail was full of bullies, people who enjoy yelling and pushing reporters around. Stories of people being held briefly against their will are legion, reporters have had pictures forcibly deleted, there is the famous case of Chumani Maxwele who was held in jail after a member of Zuma’s detail saw him extending the middle-finger to his cavalcade.

Nothing could be more different than Ramaphosa strolling along a boardwalk smiling and shaking hands.

This means that already large portions of society are ready and willing to accept him whole heartedly when he speaks on Saturday.

But still. They have high expectations about his message.

It’s not just that they want an end to corruption, they want a signal to show that the awful era that we have lived through, the Nkandlas and Eskoms and State Capture and all, they want it over. And, unfortunately for Ramaphosa, there is really only one way to send that signal. And that is for Zuma to leave, or be pushed out of office. Even better, many want those who are involved, the Guptas, the Matshela Kokos, the Mosebenzi Zwanes, to go to jail. This, obviously, Ramaphosa cannot do. At least at this stage. This means he has to come up with some kind of holding pattern, some kind of signal that something will happen on this issue, but that it can’t happen now. This is a complicated problem for him.

To make matters worse, there is a burning need for economic reform. In the international audience will be those pesky ratings agencies, who still hold much legitimacy among overseas investors. He also has to find a way to tell them that there will be change in the economy, even though he may not have the political power to actually make that happen right now.

There are also other questions that will arise. For many, the land question is crucial. His faction, as it was before the leadership election, appeared to oppose land expropriation without compensation. The faction, such as it was, that supported Dlamini-Zuma supported that motion. In the end, the conference resolved that there should be expropriation without compensation, but in a way that does not hurt the economy. It may be wise for Ramaphosa to simply quote the conference resolution verbatim, and add nothing else on the subject.

One of the reasons that January 8th Statements can appear bland, is that they are the result of the work of a committee. And when you have 80 people on an NEC, the horse that becomes a camel can look very humpy indeed. Ramaphosa now has to deal with an NEC that doesn’t yet really know itself. So complicated is the result, the fact that it appears that multiple factions won positions (well, factions that existed before the leadership conference, it’s a little more complicated now), all of this means that to some extent his speech will still have to be a balancing act.

But Ramaphosa has in the past demonstrated that he can pivot very easily. Not many people have a CV that includes lawyer, union organiser, construction firm founder, BEE mover and shaker and now party leader. There are surely ways for him to get around this problem too.

Either way, things are changing in this country. Saturday’s speech could give us an indication of how quickly that will happen. DM