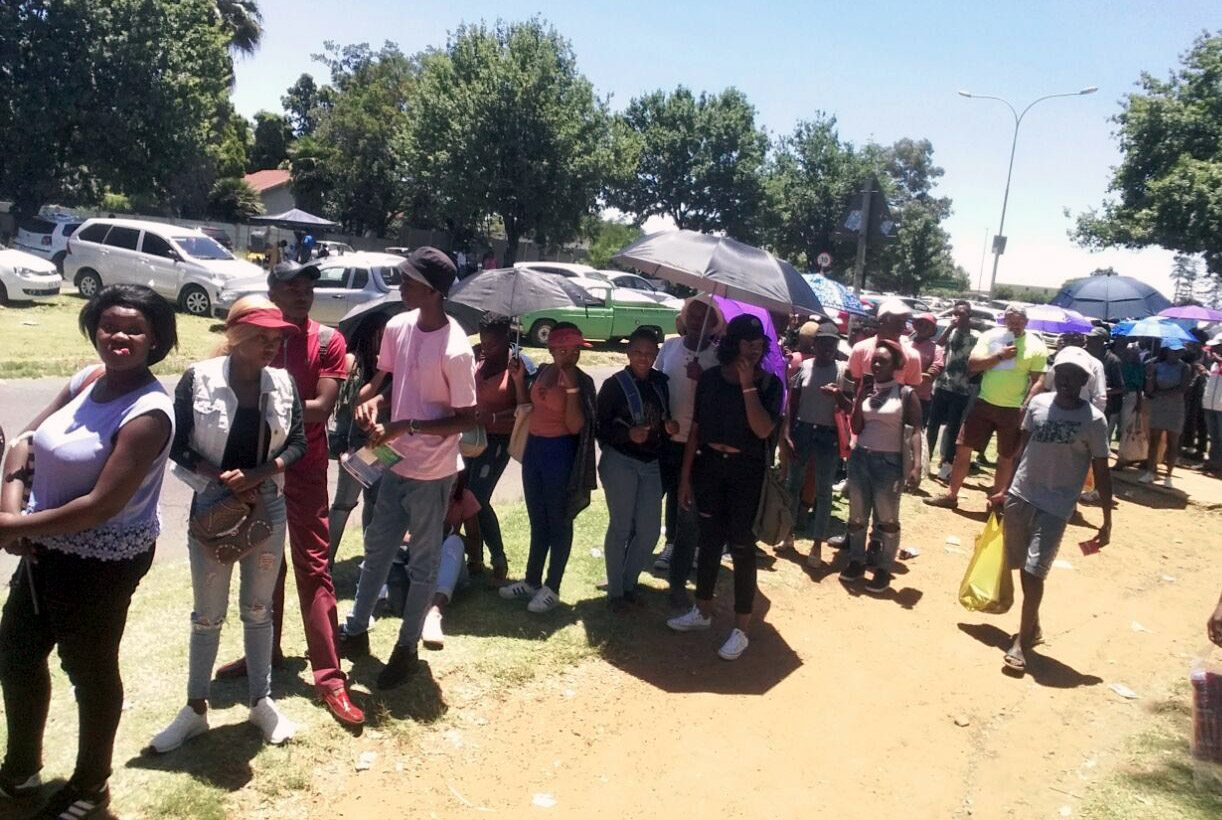 There were long queues, but major chaos was provisionally held at bay as registration began at some universities on Monday. While most have adopted a no walk-in policy, Vaal University of Technology opened its doors to first-time applicants. By BHEKI SIMELANE.

Registration opened at some of the country’s universities on Monday ahead of the start of the academic year. There have been fears of chaos in the build-up, following the Economic Freedom Fighters’ (EFF) call for all eligible students to turn up – as walk-in applicants – at the country’s institutions of higher learning.

The EFF’s call follows president Jacob Zuma’s December announcement of free tertiary education, which fell short of providing a funding model. Since the announcement, concerned higher education officials and university bodies have been working to contain potential chaos resulting from the so-called walk-in students. On the first day of registration, their attempts appeared successful to some degree.

University of Johannesburg spokesperson, Herman Esterhuisen, said no incidents had been reported by noon. “Applications for registration at the University started today (Monday), and we strictly entertain only online applications. We have also opened a late enquiry system, but that too is strictly online. We anticipate no trouble as we informed everybody about the university’s application process. At the moment we have not experienced any incidents,” Esterhuisen said.

While most universities have stood firm against walk-ins, the Vaal University of Technology did allow walk-in applications.

The university began assisting students from about 9.00 am, after some students spent the night at the institution to beat the queues. Two lines snaked from inside the university all the way out. One line comprised students who had already applied and wanted to register, while the second queue comprised late applying students and walk-in students.

Beauty Mutheiwane, the EFF’s Acting Chairperson in VUT, said university’s management had agreed with the SRC that walk-ins should be allowed. Mutheiwane said forms for late applications at the university had already been printed out, and that students who wanted to come to VUT and apply were welcome to make their way to the institution. Mutheiwane added that the EFF at the institution had put together several programmes to assist students.

“Registration has been made free for the poor as we understand that all black students are poor. VUT is dominated by black African students, hence the decision that registration for such students be free. We are also providing accommodation because registration can take more than one day,” Mutheiwane said.

Mutheiwane added that we they had also launched a programme they dubbed ‘sofunda ngenkani’, meaning, ‘we will learn by hook or by crook’. Mutheiwane said they had also put together 80 volunteers to assist students through the applications process.

The academic year for the University of Cape Town (UCT) commences on 19 February 2018, and registration takes place in the preceding two weeks. UCT has made it clear they will not entertain walk-ins.

“UCT’s admissions system requires that applications for undergraduate study are submitted by a deadline in the year prior to commencement of study. UCT does not accommodate ‘walk-in’ admissions given that applications received through the regular application system far exceed the number of students that the institution is able to accommodate,” UCT Spokesperson Nombuso Shabalala said.

She said UCT has a well-established record, over many years, of accepting academically deserving students, including those do not meet the fee requirements. Shabalala said this was done through the National Student Financial Aid Scheme (NSFAS), which has been supplemented substantially by UCT funding. She said all of this has happened within enrolment planning parameters.

Continued Shabalala, “Students who have either not applied to any university in South Africa, or who have applied to specific universities but have not received an offer of a study place for a programme of choice, are advised to submit their details online to the Central Applications Clearing House (CACH) of the Department of Higher Education and Training (DHET). The CACH system exists specifically to address the placement of students who did not apply to any university, but who now qualify and wish to be considered for an academic space.”

Shabalala said in managing the registration processes at the start of the academic year, as well as ensuring that the 2018 teaching programme gets underway according to the set timetable, UCT will assess the situation on a day to day basis. “As always, UCT’s first priority is the safety of people on campus. UCT will continue to work with DHET and Universities South Africa (USAf) to consider the implications of a fee-free policy for the higher education sector”, Shabalala said.

Wits University Registrar Carol Crosley said that online registration had commenced for returning students and for first year students who have been accepted. “This process continues for the duration of January and all Faculties are proceeding with online registration as normal.”

Crosley added that applications for undergraduate studies at Wits were made last year between March 2017 and the closing date for applications was on 30 September 2017. Matriculants who applied in this period were being assisted with queries and amendments.

The battle for free, decolonised education reached a peak in 2015 when Fees Must Fall protests erupted across the country’s institutions. The prolonged protests caused high levels of uncertainty among students as academic programmes were constantly interrupted.

The university of the Free State said the institution’s management was satisfied with the registration process thus far.

“Online registration for all students opened today (8 January 2018). Walk-in prospective students who did not apply for study at the University of the Free State (UFS) in 2017 and who qualify for the admission requirements, are assisted to apply online for programmes with available spaces. The UFS can register approximately 8,000 first-year students according to its enrolment target for 2018,” the University of the Free State’s Spokesperson Lacea Loader said.

Talks aimed at finding a way to assist walk-in applicants are on-going in a bid to averting chaos. DM

Photo: Student hopefuls queue up at the Vaal University of Technology on Monday during the first day of registration. Photo: Nkateko Mabasa