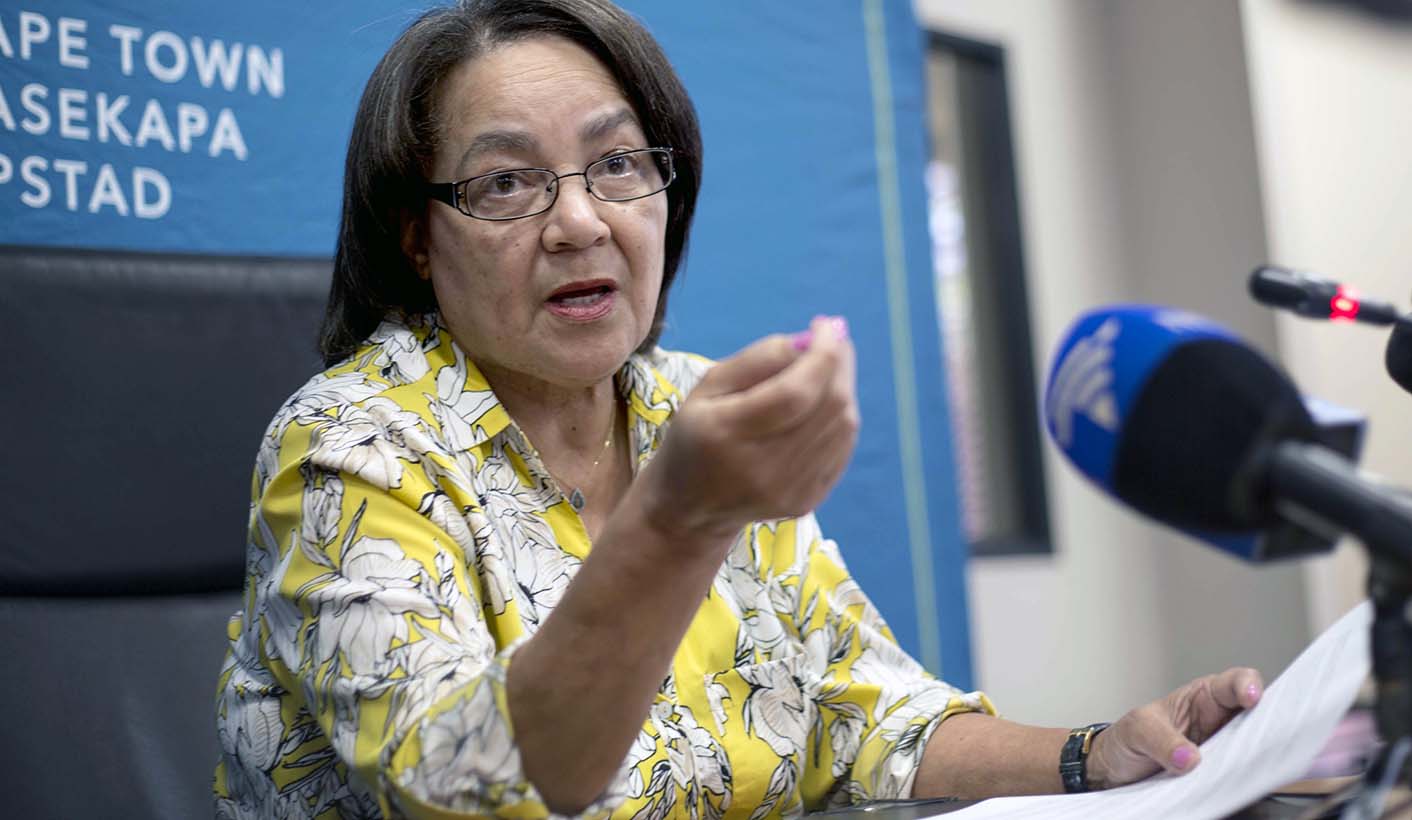 It seems there’s a serious downfall to successful water saving measures in Cape Town, namely the city’s R1.6 billion in lost revenue due to water-wise residents. To make up the shortfall, Mayor Patricia de Lille has a new plan: a drought charge, which has many households up in arms. By LEILA DOUGAN and AYANDA CHARLIE.

In her first message of the new year on Tuesday, Mayor Patricia de Lille gave residents until next week to respond to a controversial plan for household account holders to pay a drought charge to make up the revenue shortfall caused by water saving measures.

Over 45,000 comments have already been submitted by residents over the past few weeks, with De Lille extending the deadline for public comment to 15 January.

The city explained that about 450,000 households could pay between R47 and R150 per month to raise money for the city’s water augmentation plan which includes groundwater extraction, water reuse and desalination.

The mayor said that Day Zero has been brought one week forward, to 22 April 2018 due to high usage. Dams are sitting at a critical 29.7% with only 19.7% of this water being usable and residents are using 578 million litres of water per day, 78 million litres over the 500 million litre target set by the city.

National government has also faced mounting criticism over poor management of the water crisis, particularly in terms of the over-allocation of water to the agricultural sector. In an effort to curb high water usage by agricultural users, Level 6 water restrictions were implemented by the Department of Water and Sanitation this month, which requires household users to reduce their consumption by 45%, and agricultural users to reduce their water usage by 60%.

De Lille said that the city is working with national government to ‘enforce restrictions’ on agricultural users.

“It did come to our attention that some of the [agricultural users] were drawing more water than what they should. The minister [of the Department of Water and Sanitation] responded about two days ago to say that National will up the enforcement of restrictions on agriculture and also on the City of Cape Town,” said De Lille.

Speaking after the briefing, Councillor Xanthea Limberg, Mayoral Committee Member for Informal Settlements, Water and Waste Services and Energy, said the agricultural sector would reach their summer allocation of water within the next two weeks if they didn’t drastically reduce their consumption.

“They’ve used up a large portion of their allocation already, but this is outside our area of responsibility. National needs to manage allocation and manage whether agriculture is sticking to the restrictions target,” said Limberg.

At the briefing, De Lille emphasised that the city is working closely with the Department of Water and Sanitation and that “it’s not going to be helpful just to blame” during a crisis.

“You need to give the people of the city of Cape Town hope, and show leadership … we have to, as the City of Cape Town, also take responsibility to make sure that we bring on the necessary augmentation of water,” said De Lille, who has been suspended from DA party politics as she is facing an internal investigation.

Responding to questions about the water crisis and corruption charges that have shaken the inner workings of the Democratic Alliance, De Lille insists that despite facing suspension, she is “not distracted”.

“I have a responsibility to the people of the City of Cape Town, that’s what I’m paid to do,” she said at the press briefing.

On Tuesday, News 24 published details of a leaked report by independent investigators on several allegations against City of Cape Town officials implicated in corruption, irregular expenditure and mismanagement.

According to the leaked report, De Lille may be guilty of ‘gross misconduct’ after she allegedly prevented City manager, Achmat Ebrahim, from reporting wrongdoing by the commissioner of transport and urban development authority, Melissa Whitehead, to the council. Whitehead allegedly faces four charges relating to tender irregularities and nepotism dating back to 2014.

Following these damning allegations, the City council ordered an investigation into De Lille last Friday. News24 reported that the DA’s federal executive would meet this coming weekend to consider De Lille’s response detailing why she should not resign.

The mayor has disputed the report and said she felt “unfairly and unnecessarily defamed and embarrassed”. DM

Photo: Patricia De Lille: “You need to give the people of the city of Cape Town hope, and show leadership.” Photo: Leila Dougan.