Flying low: The Guptas could lose ZS-OAK, their private jet 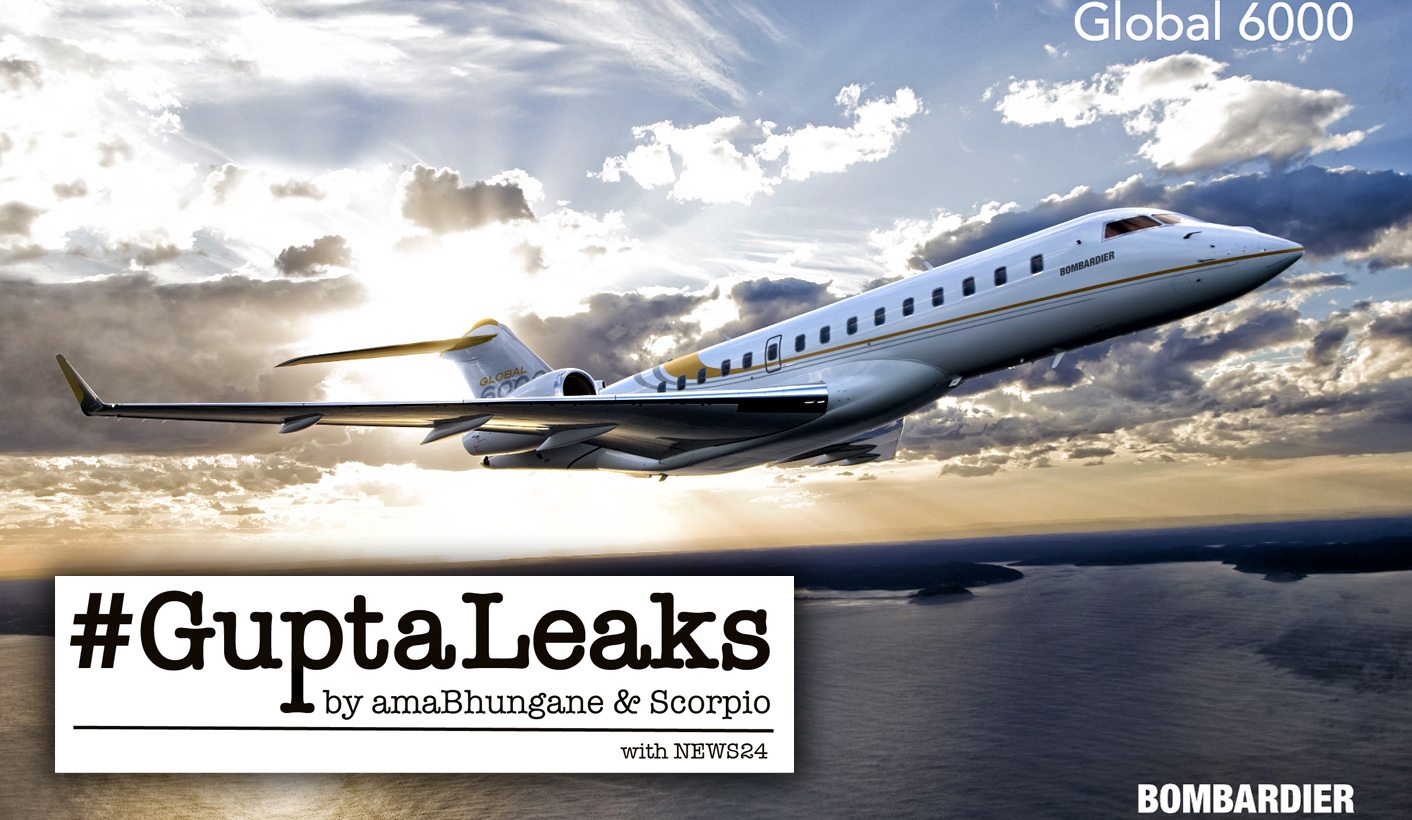 Sadly, the brothers may soon be flying commercial. By RICHARD POPLAK.

ZS-OAK, the tail registration of the Gupta brothers’ jet—a powerful symbol of the family’s immense wealth and global reach—may soon be grounded.

Following an investigation by amaBhungane and Daily Maverick’s Scorpio, which ran in conjunction with several pieces in Canada’s national newspaper, the Globe & Mail, it was revealed that Canada’s Export Development Corporation (EDC), ignoring the Guptas’ political exposure, loaned the family $41 million to purchase their now infamous ZS-OAK private jet. The resulting fallout, along with the Guptas reportedly being unable to service the debt, has led to EDC cancelling the loan.

The jet was purchased from the sleaze-ridden Montreal-based Bombardier Aerospace, which has recently been involved in bribery scandals in South Africa, South Korea, Azerbaijan, and Russia, to name only a few. The #GuptaLeaks revealed that Bombardier had courted the Guptas over the course of 2014, and in December of that year helped facilitate a loan between Westdawn Investments, an arm of Gupta umbrella company Oakbay, and Bombardier Aerospace, for the purchase of a Global 6000 business jet. Subsequently, ZS-OAK has flown South African politicians around the world, included deputy president (and newly-inaugurated ANC president) Cyril Ramaphosa, who in 2015 used the jet to attend a junket in Japan.

EDC is mandated to help facilitate Canadian business abroad. On paper, there is nothing especially notable about the lender—most countries have some version of an export development agency (EDA), which provide a range of financial instruments, including loans, bridge financing and insurance, to local manufacturers. But export development agencies are subject to scant international oversight, and they are a significant source of the dark money that flows through the global economy.

EDC is one of the biggest of its kind in the world, behind only China’s Exim Bank, and neck-in-neck with Japan’s EDA. The agency provided over $100 billion in financial services to Canadian companies and their clients in 2016. Traditionally, it has financed companies in Canada’s bread and butter industries—mining, oil and gas. Lately, however, it has underwritten Canada’s tech boom and, to a much larger extent, its big manufacturers. Bombardier is probably one of its greatest beneficiaries, having received around $5 billion in services over the course of 2015 alone.

Despite being an arm of the Canadian government, and notwithstanding Canada’s squeaky-clean international reputation, EDC is an opaque organisation that has consistently refused to institute more robust disclosure practices. No one in Canada, including the minister that oversees the agency, knows precisely how much it provides and to whom, and nor does it disclose the methodology behind its due diligence practices. This renders it a financial black hole—every year, it pumps over $100 billion into the global economy, from companies like scandal-plagued miner Kinross Gold, to two-bit operations like Westdawn, with much of that money being untraceable.

When asked why a syndicate as toxic as the Guptas were provided $41 million to buy a luxury jet, EDC spokesperson Phil Taylor, would not comment on specific transactions because, “the law does not allow EDC to disclose third party information without the consent of the obligor.”

He said in an email that, “in the case of allegations, EDC will undertake enhanced due diligence to better understand the situation (for example, are the allegations politically-driven, are they coming from a business competitor, and, conversely, are they leveled by formal authorities, is there a formal investigation, etc.) Where the facts surrounding the allegations cannot be determined or substantiated, EDC will then work directly with the obligor to research and document the issue to the satisfaction of EDC or the transaction does not go forward.”

In other words, the Guptas would be called on to investigate Guptas, an arrangement unlikely to result in success as far as disclosure it concerned.

Three days ago, a lengthy expose on EDC, written by this reporter, was published online by Walrus Magazine, a Canadian general interest periodical. A day later, according to a front-page article in the Globe & Mail on Thursday, EDC announced that it would be rescinding the loan, and may take steps to repossess the aircraft should the brothers continue to miss payments, and should they be unable to refinance.

ZS-OAK is currently in Basel, Switzerland, following a lengthy sojourn in Dubai. The Guptas may be forced to leave it there, and fly steerage back to Dubai. That is unlikely to upset many South Africans, but it is a small indication of how far the family has fallen over the course of this tumultuous year. DM