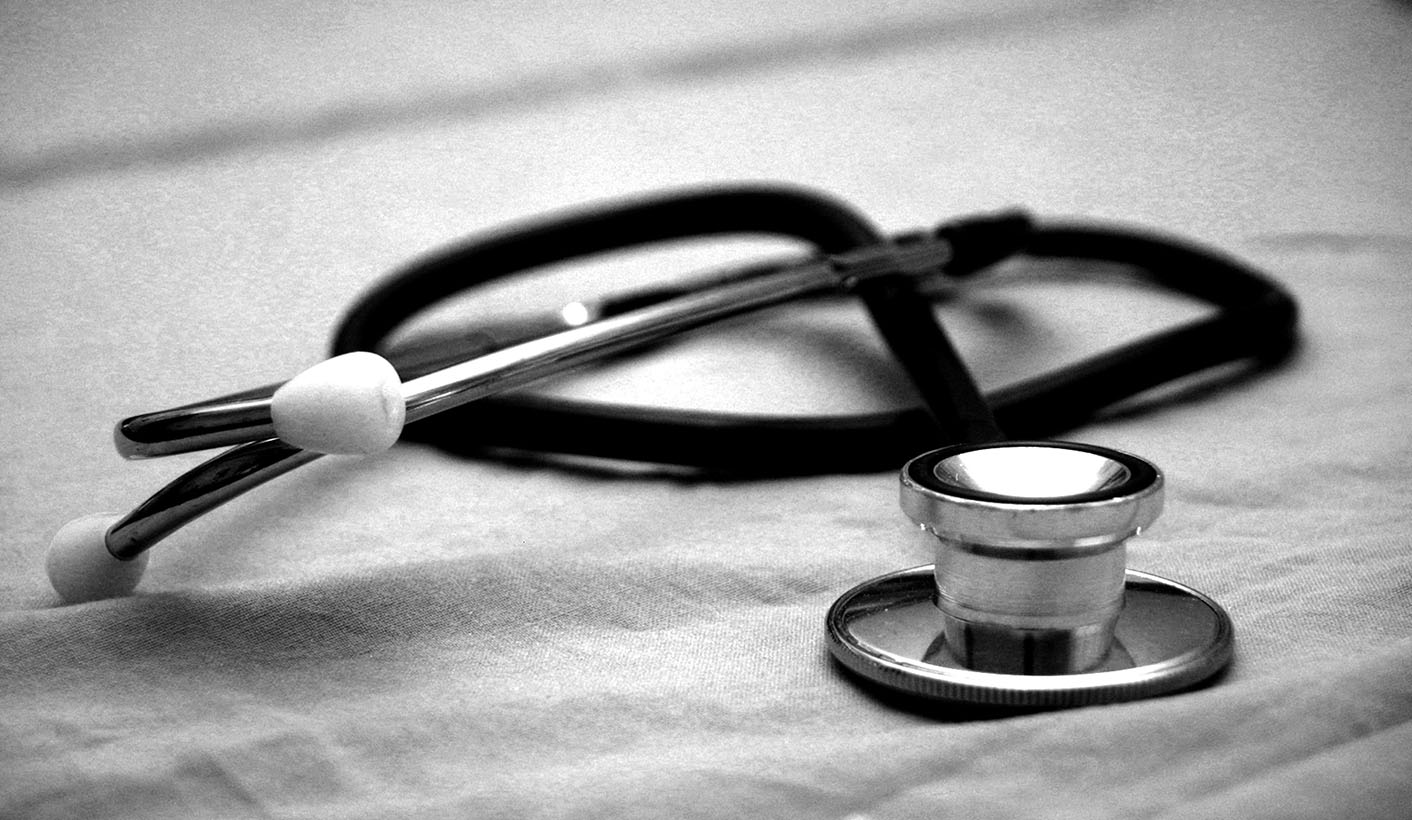 The HPCSA should be looking at more ways to increase the health workforce now, says the writer. (Photo: Hush Naidoo / Unsplash)

Desperate for solutions, medical graduates – due to start work on 1 Jan 2018 but who were still without placements at the end of November – turned to social media, campaigning with the hashtag #unemployeddoctors. In the interim, the Department of Health says it has placed all South African citizens. But troubled graduates say the problem is far from solved – and that in a country facing a critical shortage of doctors, the long-term ramifications could be serious. By MARELISE VAN DER MERWE.

The National Department of Health says all South African medical graduates have been placed since their plight drew national attention. But graduates themselves – including physiotherapists, occupational therapists and those in other fields – say placements are still hanging in the balance for hundreds who continue to face uncertain futures.

Moreover, say graduate activists, the placements that have been allocated are not finalised.

The stated numbers vary regarding the discrepancy between medical graduates and available posts. Speaking of doctors specifically, Shadow Minister of Health Wilmot James put the numbers at around 1,700 and 1,250 respectively, with a difference of over 400. Including all fields, the numbers could be higher, says Tumi Adebanji, one of the graduates behind the #unemployeddoctors campaign.

Adebanji, qualified both as a nurse and a doctor, is from Nigeria but has permanent residency in South Africa.

In simple terms, it appears there has been a shortage of posts combined with administrative blunders. According to the Department of Health, South African-born graduates were placed first and, says Popo Maja, Head of Communications, these have all been placed. Daily Maverick received confirmation from Maja and viewed a complete list of interns from one hospital, which indicated that their placement had been confirmed late in December, barely 10 days before the first day of work.

“All South African-born medical interns and community service have been placed. At the moment, the department is considering the appeals of a few who are not happy with the location of their placement,” Maja told Daily Maverick.

Adebanji, however, says she knows of at least one South African citizen in the #unemployeddoctors group who has not yet been placed. Another graduate, who asked to remain anonymous, told Daily Maverick that despite being a South African citizen, they had not been officially placed.

“I was second-rounded, and placed in the Ekurhuleni district municipality. I made a WhatsApp group for all of us who had been placed in the second round there, and heard everyone in that group had been called or emailed. I had not. Since 1 December my online allocation has remained the same, but I was driving to Joburg with my stuff last Tuesday 12 December when I phoned HR in Gauteng for DoH and heard my name was not on the list and they had already filled all the posts for Ekurhuleni.” The graduate followed up, only to hear there was no record of their name anywhere on the system. “I have had no email or phone call, and every person I have called has not been able to help or has said they don’t have my name or the posts are full.”

The graduate, who sent Daily Maverick supporting documentation, says South Africans who have been placed should have received contracts over two weeks ago. They described their situation as “pretty desperate”.

Further, Adebanji says, the placements for South African-born graduates that have been made are not finalised, as they were confirmed so late it is not clear whether all graduates will be able to accept them.

There is an “exchange and appeal” process in place, whereby graduates unhappy with their placement can find another graduate to swap with – a little like a buddy system – or, failing that, may appeal the decision. This, however, places a further delay on finalising allocations.

Fellow graduate Jeongeun Woo says it is past time for appeals. “Every year towards the end of sixth year studies, applications for internship posts open, where this year the system allowed us to pick three equally weighted choices from a list of hospitals provided where we would potentially like to work,” she says. “Then the ICSP system ‘matches’ or ‘places’ a student or newly qualified [medic] with a specific hospital… If you are not matched or reject a post allocated to you [which may not necessarily be from the three you chose], you are rolled into the second round, and third, and so forth until you are placed. We are also allowed to submit special considerations such as marriage, religious obligations and family obligations. Theoretically these applicants are to be considered first.

“The last round for application of the year is called an asynchronous cycle that is supposed to happen around June or July each year.” The first round, say she and Adebanji, was still being completed in November. And those who have been placed were given random allocations – the second round of applications never took place.

Further, says Woo, although the Junior Doctors Association of South Africa – which was liaising with the DoH – negotiated a rule that applicants would be placed within 100km of their requested facilities, some were placed as far as 800km away. One unnamed student, a married mother and pregnant with a new child, was placed 1,500km from her family.

Others, says Woo, were assigned to hospitals that had no accredited internship training programmes. Daily Maverick was unable to confirm this independently.

Given the shortage of posts, South African-born graduates are given posts first, then permanent residents, then foreign nationals, which means there are many graduates still facing a very long wait. This is bad news both for South Africa – which faces a critical shortage of medical professionals – and graduates who have sunk large amounts into their studies.

In South Africa’s case, research has painted a grim picture. A 2016 study by Econex revealed that up to 17% of newly qualified doctors may be emigrating, and as much as 80% of doctors would rather not work for the state due to poor working conditions. The country’s ratio of doctors, dentists and other medical professionals compares poorly to middle-income countries globally, and it’s not just state facilities suffering – the private sector faces shortages too. According to Health Minister Aaron Motsoaledi, there’s also a chance that student protests have had an impact on the number of graduating doctors, contributing to a further future shortage.

As for graduates, the sunk investment in their studies can sting. Woo, who has spent more than half her life in South Africa, is, like Adebanji, a permanent resident. She passed her medical studies with an aggregate of over 70%. As a foreign-born student, her studies cost her approximately R600,000.

Adebanji has been studying in South Africa for a decade.

“Medicine was my second degree,” she explains. “I studied nursing while my papers were being processed for permanent residency. I have been studying for 10 years straight. It is very frustrating to think I went through all of that and now I do not have a job.” Adebanji will be returning to her parental home, as she can no longer afford to continue paying rent indefinitely in Pretoria while she waits to hear whether she has got a post.

Ironically, Adebanji was in fact allocated a post. She and several other activists from the #unemployedddoctors campaign went to the Department of Health in person early in December, having not received any response to their phone calls or online support tickets. (They had issued these complaints after being promised information regarding their allocations on 20 November, only to find that the support representative for ICSP had exited the online group.) “Our tickets logged were not being answered – we were completely in the dark,” she relates. While at the department, they were granted an audience with Director-General Precious Matsoso, and Adebanji was given a placement at one of her chosen hospitals. Daily Maverick has seen a screen shot of the placement.

Two days later, the placement was retracted. Adebanji says she was not informed – she just happened to check that all was in order and came across a “regret to inform you” message.

The Junior Doctors Association of South Africa has been attempting to liaise with the Department of Health, but with limited success, say graduates. At the time of writing, Daily Maverick’s multiple attempts to reach several representatives of JUDASA were unsuccessful.

The National Department of Health, meanwhile, has sent conflicted messages about who is to blame. Motsoaledi, who earlier in the year said that there was no problem, has since said that there are certain key provinces – the Western Cape, Kwa-Zulu Natal and Gauteng – that are not playing ball. The provinces that have to carry huge numbers of interns are the Western Cape, KwaZulu-Natal and Gauteng. “If those provinces don’t budge, you experience a problem. I have been telling them that they have to fill those posts,” he said at the end of November. “If it means taking some province to court, which will be embarrassing, I will have to do so and say, ‘This province is refusing to meet its statutory obligations, what do I do?’ But I am hoping it won’t come to that.” But the Western Cape provincial department said at the time that it was short of funding from Treasury.

The graduates, meanwhile, just want to know what the next step is. Both Woo and Adebanji say they understand that South African citizens must be taken care of first – but then they want that to be the case. “Take care of your own, I get it,” said Adebanji. “We are just so confused. We just need answers. I can wait. The latest communication we got was today – saying [the DoH] was still trying to finalise posts for South African citizens and they have no idea when they will get to permanent residence and they have not yet got to foreign nationals.”

Photo by Hush Naidoo on Unsplash