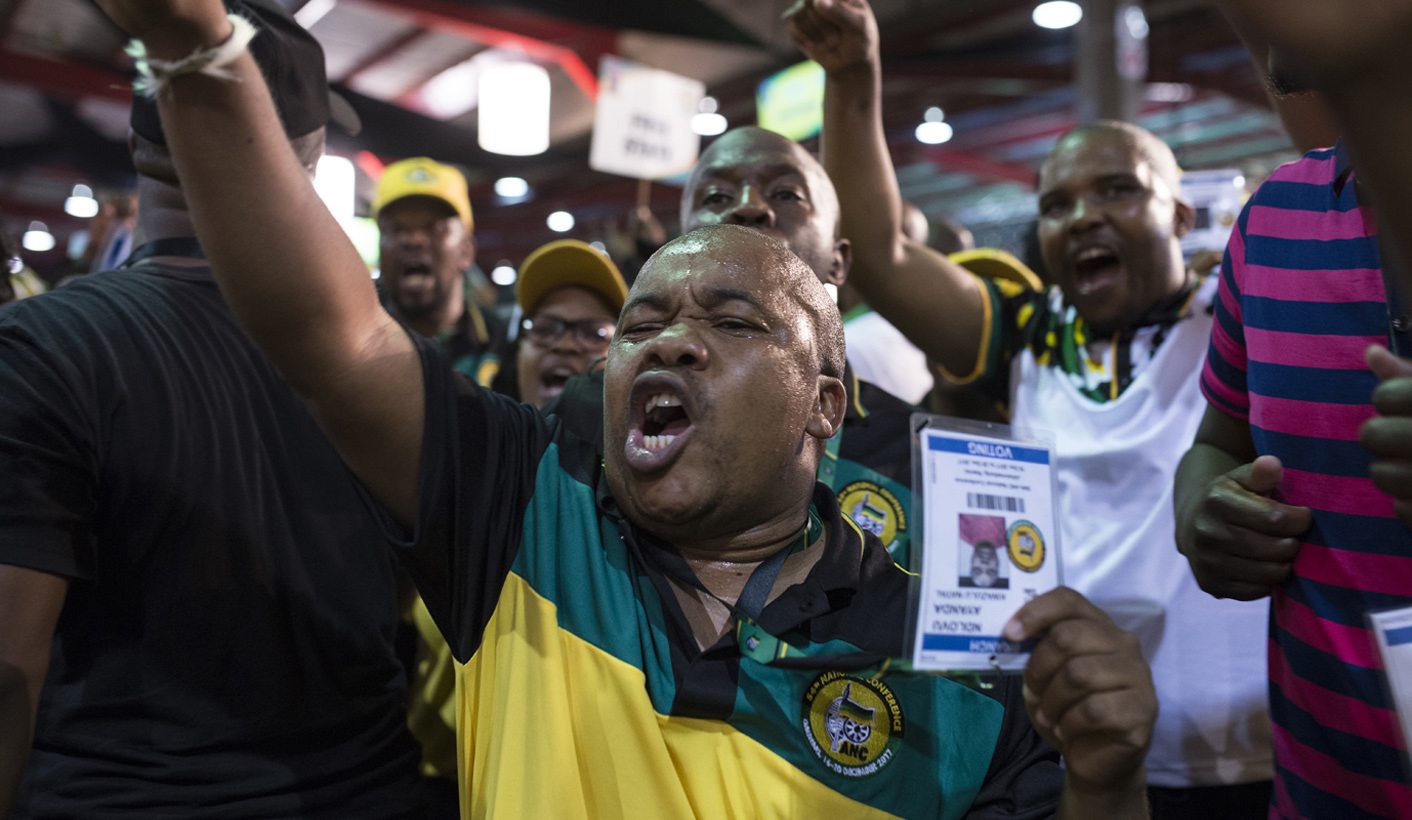 Election results for the ANC’s additional 80 members of the national executive committee (NEC) were finally released in the early hours of Thursday morning. With the allegiances of the top six officials split, the NEC will be crucial moving forward. But the results point to a stalemate, with the two different factions taking a similar number of positions. By GREG NICOLSON.

If you thought the ANC was united by the election of its top six officials on Monday, a quick comparison of the Cyril Ramaphosa and Nkosazana Dlamini Zuma camps’ preferred NEC candidates revealed how divided the party remained. Only two names appeared on both lists, seen by Daily Maverick – Lindiwe Zulu and David Masondo. So much for unity.

Election agency Elexions finally announced the NEC results at 3:05am on Thursday morning, and they were split right down the middle. With both factions taking a similar number of positions, it could be difficult for either to get their way, leading to a potential stalemate on key decisions.

In an initial analysis, Daily Maverick counted at most two or three more supporters elected to the 80-person NEC from Ramaphosa’s list than Dlamini Zuma’s, with Zulu and Masondo appearing on both lists and three elected members seemingly appearing on neither list.

Zweli Mkhize received the highest number of votes cast, pointing to his appeal across slates. Some of the notable successes for the Ramaphosa camp include Lindiwe Sisulu, Senzo Mchunu, Pravin Gordhan, and Derek Hanekom. Team NDZ will no doubt be relieved to note the inclusion of Nkosazana Dlamini Zuma, Bathabile Dlamini and Faith Muthambi. Both camps got many of their key supporters in.

It was a bleak night for the South African Communist Party, with leaders like Blade Nzimande and Thulas Nxesi failing to make the cut. Neither did MKMVA chief Kebby Maphatsoe, former deputy finance minister Mcebisi Jonas and former finance minister Nhanhla Nene.

Carl Niehaus’s political career may finally be hitting the skids after he was neither on a preferred list, nor elected.

The Elexions agency reported that 235 candidates appeared on the ballot sheets due to be marked by 4,776 eligible voters. In the end, there were 4,283 ballots cast, with 59 spoilt votes.

The ANC’s new top six features a chasm likely to obstruct any progress for either faction. Party President Cyril Ramaphosa, Chairperson Gwede Mantashe and Treasurer Paul Mashatile are on one side. Deputy Presdient David “DD” Mabuza, Secretary General Ace Magashule and Deputy Secretary General Jessie Duarte are on another.

There’s speculation Gauteng’s Mashatile and Mpumalanga’s Mabuza might have worked together to get elected, but the configuration of the top six remains unworkable with Ramaphosa in leadership and Magashule running the party. The direction the ANC takes ahead of the 2019 elections will depend on the balance of forces in the NEC.

The NEC’s significance cannot be overstated. In between national conferences, it is the ANC’s highest decision-making body. It takes forward conference resolutions and governs internal matters. Women must make up at least half of NEC members.

There were widespread calls for Zuma to resign or be recalled after the Constitutional Court said he had violated the Constitution regarding the security upgrades to his Nkandla home. But the ANC’s national working committee and NEC decided to “accept the president has apologised – that is humility that is necessary for any leader”.

It was the NEC that decided to share collective blame for the party’s 2016 election losses rather than blame its leader. When some members asked Zuma to step down in November 2016, they were outnumbered by those who wanted the president to stay. The NEC is also responsible for overseeing or dissolving provincial executive committees (PECs), which have given the party headaches lately.

Speculation after Ramaphosa’s victory has centred on whether Zuma will be asked to step down as president of South Africa, but that’s the NEC’s decision to make. It can recall Zuma, or pressure him to resign, as it did to former President Thabo Mbeki in 2008. If he refuses, the NEC can instruct ANC MPs to remove him through a no confidence motion in the National Assembly.

Fikile Mbalula on Wednesday said any decision to recall Zuma would be taken by the NEC and not the top six. As the NEC’s allegiances are divided, a recall decision on Jacob Zuma looks unlikely in the near future. Even its day to day functioning may be hindered unless Ramaphosa’s legendary peace-making skills can prevail. DM