#ANCdecides2017: Balance is key in the coming weeks of ‘two centres of power’ 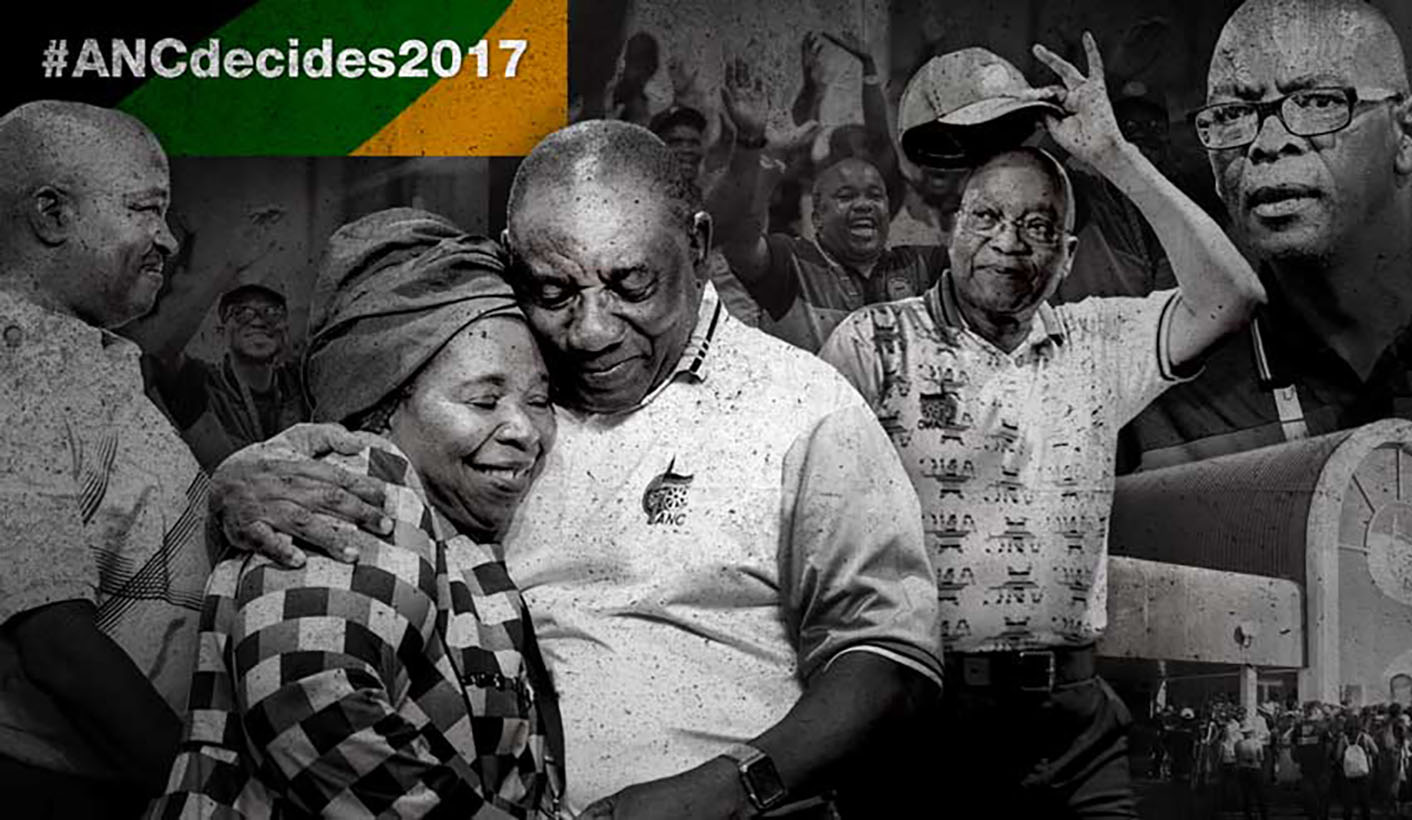 Power, when it moves, moves fast, and just after midnight on Wednesday the first stirrings were apparent as newly-elected ANC president Cyril Ramaphosa addressed President Jacob Zuma from the stage. In the next few days, veterans from the ANC are set to approach Zuma, asking him to step down as President, but with a fairly even balance of forces in the national executive committee, it’s not sure which way these forces will move. By CARIEN DU PLESSIS.

As he started his closing address to the ANC’s 54th national conference at the Nasrec Expo Centre, newly-elected ANC president Cyril Ramaphosa stood on the stage behind his podium, looking down on President Jacob Zuma.

Zuma sat on the conference floor to Ramaphosa’s left in some seats assigned to the ANC Veterans League.

Ramaphosa started his first speech as ANC president by telling Zuma: “I feel like I’m walking in your shoes tonight.” Nothing about them being too big, however.

When he concluded the speech, Ramaphosa thanked Zuma for his 10 years as ANC president, his vision that led to producing the National Development Plan, and for expanding the anti-retroviral programme.

Briefly he went off script: “We as officials will miss you. What will we miss? We will miss your jokes, we will miss the sweets you always gave to us, and the wonderful conversations that we used to have,” he said.

The veterans Zuma joined on the floor were ironically the same ones who, six months ago, told him to step down. A Ramaphosa campaigner said they would do so again.

What’s different now is that Zuma is no longer the president of the ANC, an organisation on which he had an iron grip. The power balance among the newly-elected additional members of the party’s national executive committee, announced in the early hours of Thursday morning, is almost exactly 40/40.

It’s likely, however, that this could start tipping slightly towards Ramaphosa in the next few weeks, the way power moves.

Already the likes of Ekurhuleni mayor Mzwandile Masina who, a few weeks ago said he could never work with Ramaphosa, is now saying they’ve worked closely together before.

Masina lobbied for ANC MP Nkosazana Dlamini, who was Zuma’s choice for a successor.

A Ramaphosa supporter said at the end of Wednesday’s long plenary that things felt lighter in the party again. “It’s as if this arrogance of these people in the (ANC) youth league and the women’s league is gone,” he said about the general atmosphere at plenary and among Dlamini Zuma supporters.

But it’s unlikely that Zuma would go without some kind of a fight, or without at least securing his future.

Soon after Ramaphosa’s closing speech to the conference, a supporter of Dlamini Zuma told Daily Maverick: “We won this conference, we got (Ramaphosa) to say ‘radical economic transformation’ and ‘expropriation without compensation’,” he said about Ramaphosa’s balancing act between the radical language of the conference and the moderate explanations that would keep the markets happy. “l want my land back, and that’s why I’ll work with him.”

This battle about expropriation without compensation was one of a few that kept the conference deadlocked for hours. Delegates slugged it out, loudly and physically, on the conference floor (no chairs were thrown) over laws on the restitution of land.

The Dlamini Zuma camp had some victories in this (rather loud) round, because the expropriation without compensation resolution was adopted.

The Ramaphosa camp, however, pushed for moderation – and got it – saying such expropriation needs a bit more thought before it could become law.

For the first time at a conference, two delegates were disciplined and chucked out of a plenary for rowdy behaviour.

A Ramaphosa supporter said of this: “We are dealing with them.”

This, however, shows that the ANC is still a terrain of great contests. One of the places that these contests play off are the courts, which the Ramaphosa camp has used to its advantage.

In the run-up to the start of the conference on Saturday, the Ramaphosa camp apparently had a tough time, but things started picking up the day before when they won three court cases. A couple of hundred delegates (supporters of Nkosazana Dlamini) were disqualified.

During the elections of the top six there was some contention about whether all the branch delegates that voted were supposed to have done so after pro-Mchunu delegates were initially left off but brought back to conference. Out of the 63 “missing” delegates, 15 have been verified as having been on the voters’ roll and their votes have been counted, while the participation of the rest – mostly votes for Mchunu – was contentious.

“We will have Senzo back here (as secretary general) within two weeks,” a Ramaphosa supporter vouched.

This will tip the top six leadership, currently evenly divided between the Ramaphosa and the Dlamini Zuma slates. Should Mchunu return, four of the officials would be pro-Ramaphosa.

Already, in the past few days there were reports that ANC deputy president and Mpumalanga premier David Mabuza (who was on Dlamini Zuma’s slate) has sided with the Ramaphosa camp, and this is apparent in the 63 missing votes issue. The balance could therefore end up being one of the top six in Zuma’s favour.

In plenary on Wednesday, there was also an attempt to pass a motion that Zuma should step down, but it wasn’t well lobbied and the balance of forces in the NEC was unclear yet, so it didn’t take off.

Should Zuma not resign after the veterans ask him to, the NEC could discuss and vote on his recall, even as early as during their first meeting in East London on 5 January (ahead of the party’s January 8th birthday celebrations a week later).

Should this not work, the NEC could take a resolution to pass a motion of no confidence in Zuma, and he’d then be removed in Parliament.

Former president Thabo Mbeki faced a similar dilemma in 2007 and 2008 after Zuma was elected ANC president. Then, the buzz term was “two centres of power”. At a briefing following conference discussions on organisational renewal, rapporteur Febe Potgieter-Gqubule said the ANC expected Zuma to take instructions from Ramaphosa. The incoming ANC NEC would have to “manage two centres of power” now, she said.

Already during the conference a list was circulating of ministers who Ramaphosa should appoint under him after Zuma is out of office.

It suggests Zweli Mkhize should go to the finance portfolio, Pravin Gordhan to public enterprises, Blade Nzimande to higher education and Lindiwe Sisulu to international relations, among others.

Ramaphosa himself is set to become president, should Zuma step down, with Mabuza as his deputy.

Whether it is Zuma who will deliver the State of the Nation Address in six weeks’ time is uncertain, and perhaps it allows too little time to prepare, but most delegates at the conference said they did not expect him to stay on. Even sources both close to him and to Dlamini Zuma said she’d have asked him to step down if it was her who got the top job.

On Thursday morning after Ramaphosa’s speech, a handful of delegates – most of them the 235 candidates for the NEC – sat around in the plenary hall, some with ANC blankets wrapped around them, waiting for the NEC elections results.

Ramaphosa had already moved down the stage and out the hall with his entourage and some branch delegates who wanted to greet him, looking purposeful and busy.

Zuma, on the other hand, stood behind the long table where he was sitting, as some delegates clustered around him to greet. After a long while, he exited the hall, just to come back and hang around the hall again. Perhaps he had nothing better to do at the time, or was this a demonstration of sorts of his persistence? DM