2017 Daily Maverick African Person of the Year: Grace Mugabe, the vanquisher of Robert 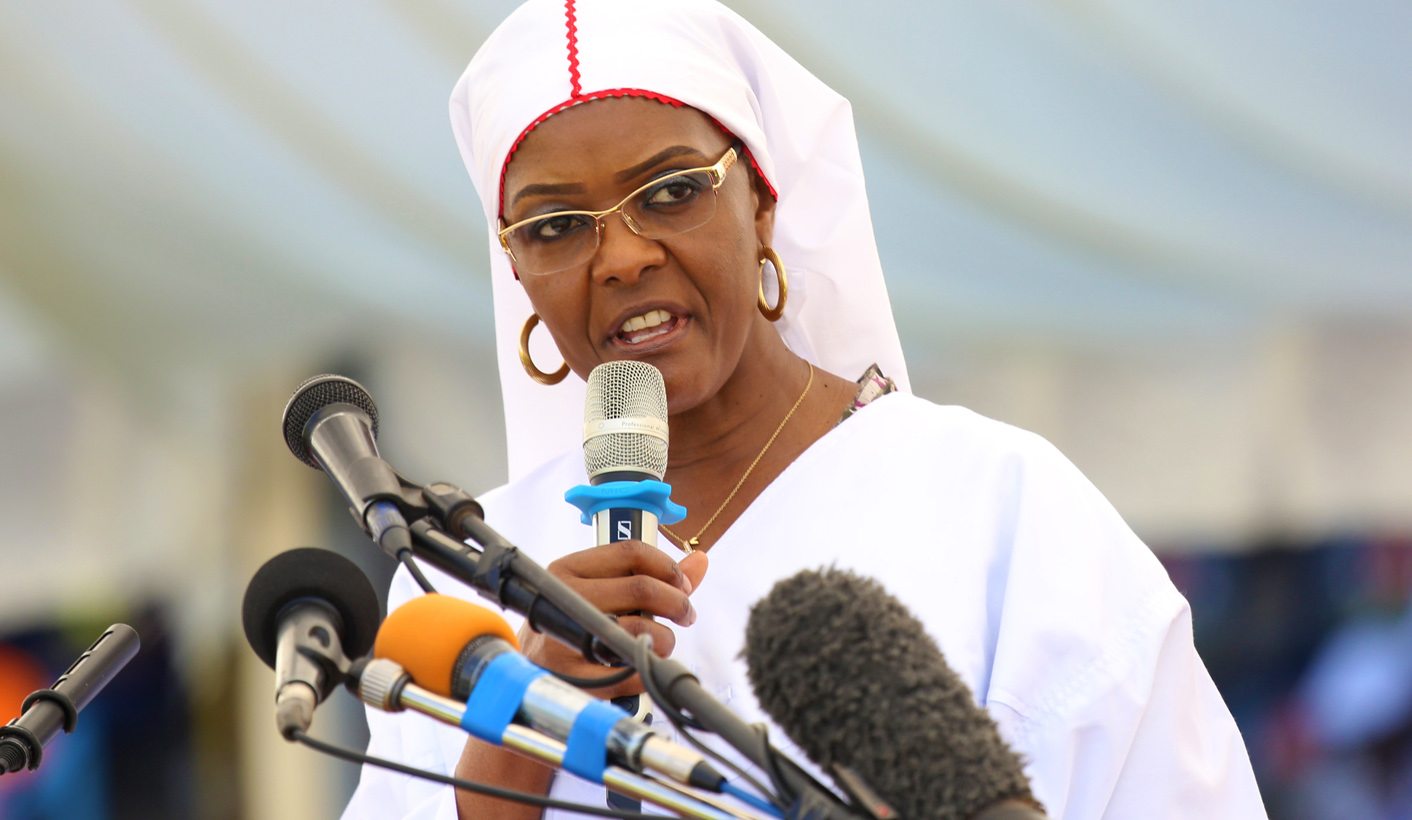 Within two weeks Grace Mugabe went from being on a seemingly unstoppable trajectory to becoming president of Zimbabwe to being expelled from Zanu-PF and her husband removed as party leader. And in that time the First Lady Dr Amai Grace Mugabe was finally recast in the ignominious role of the crude secretary-mistress whose Lady Macbeth-level ambition brought to an end one of the longest running presidencies on the continent. By KRISTEN VAN SCHIE.

On a Wednesday afternoon in November, Grace Mugabe stood outside the Zanu-PF headquarters in full party regalia before a crowd of thousands.

Her husband’s face was stamped across one sleeve, her wrists stacked with armbands in Zanu green and yellow and red and black. She was smiling.

Her biggest rival, Vice-President Emmerson Mnangagwa, had been fired just two days earlier. It had been a year-long campaign of sustained insult and innuendo. But it was her booing by a crowd at a weekend rally – in front of her husband, no less – that got the job done.

Mnangagwa was out, finally, and she stood in prime position with the backing of both the party’s women and youth leagues to fill his seat. The police had even launched a manhunt to find and arrest the hecklers from the weekend before.

She was a First Lady at the peak of powers, in a seemingly unstoppable trajectory to the top job in the country. And this rally was for her.

Less than two weeks later, Grace Mugabe was expelled from Zanu-PF and her husband removed as party leader. The reliably fawning state media turned, and First Lady Dr Amai Grace Mugabe was suddenly recast in the ignominious role of the crude secretary-mistress whose Lady Macbeth-level ambition brought to an end one of the longest running presidencies on the continent.

That Grace’s showdown with Mnangagwa should have ended so badly must have come as a surprise in a year when she was literally allowed to get away with assault.

“She cornered me and started beating the hell out of me,” South African model Gabriella Engels said of the alleged August incident when she was attacked by an extension cord-wielding Grace in a Sandton hotel room where the wayward Mugabe sons were said to be wasting away the family fortune.

“She just had this sort of look in her eyes, that she was furious,” Engels told News24. “She was well-dressed and I had no idea who she was. She kept screaming, asking where her son was.”

In her deposition, Grace went on the attack. Again. She called Engels “intoxicated” and “unhinged” and alleged the model came at her with a knife.

Not that it was necessary. On a Sunday morning, the South African government quietly and retrospectively granted Grace immunity. And as journalists waited for her to hand herself over to the police, Zimbabwe’s state press reported that their First Lady had returned home safely.

In ousting Mnangagwa, Grace consulted the same playbook she’d used to get rid of his predecessor, Joice Mujuru, in 2014: hints and light jibes that over the months turned to outright public condemnation and claims of witchcraft, scoring Grace a position as head of Zanu-PF’s women’s league – and a seat at the table of the party’s all-powerful politburo.

The day before Mnangagwa was sacked – the day after his supporters had publicly booed her – the First Lady brought her year-long campaign against him to a crescendo, telling a rally of thousands that he had been plotting a coup for decades. An accusation that would have seemed just her brand of crass political opportunism had Mnangagwa not gone and done exactly that a week later.

The fall, when it finally came, was stunning.

Thousands of Zimbabweans took to the streets in a historic celebration.

But the party that had always remained fiercely loyal to Mugabe did so even as he fell. On carpets. Down stairs. From power. His sins – the destruction of an economy, the fixing of elections, the abduction and torture of dissidents, the crushing of uprisings – were seemingly forgotten behind the glare of Grace’s enormous ambition.

“Grace, a mad woman with no brains, was in charge of the country on behalf of her cohorts,” said war veterans’ leader Chris Mutsvangwa.

“She lacked grooming and true motherhood… it is unfortunate that the president allowed her to usurp executive authority from him thereby destroying both the party and government,” said the turncoat youth league.

“One can only speculate how the legacy of Comrade Robert Mugabe might have ended had his wife not exhibited and indulged her political ambitions in such a crude fashion,” lamented the treacherous state media.

Gone was Amai Mugabe, Mother of the Nation.

In her place: Lady Grace Macbeth, standing in the middle of a hotel room with a fistful of too-much power, wreaking havoc. DM