#ANCdecides2017: Awkward start for Ramaphosa puts balance of power in the hands of pending NEC election 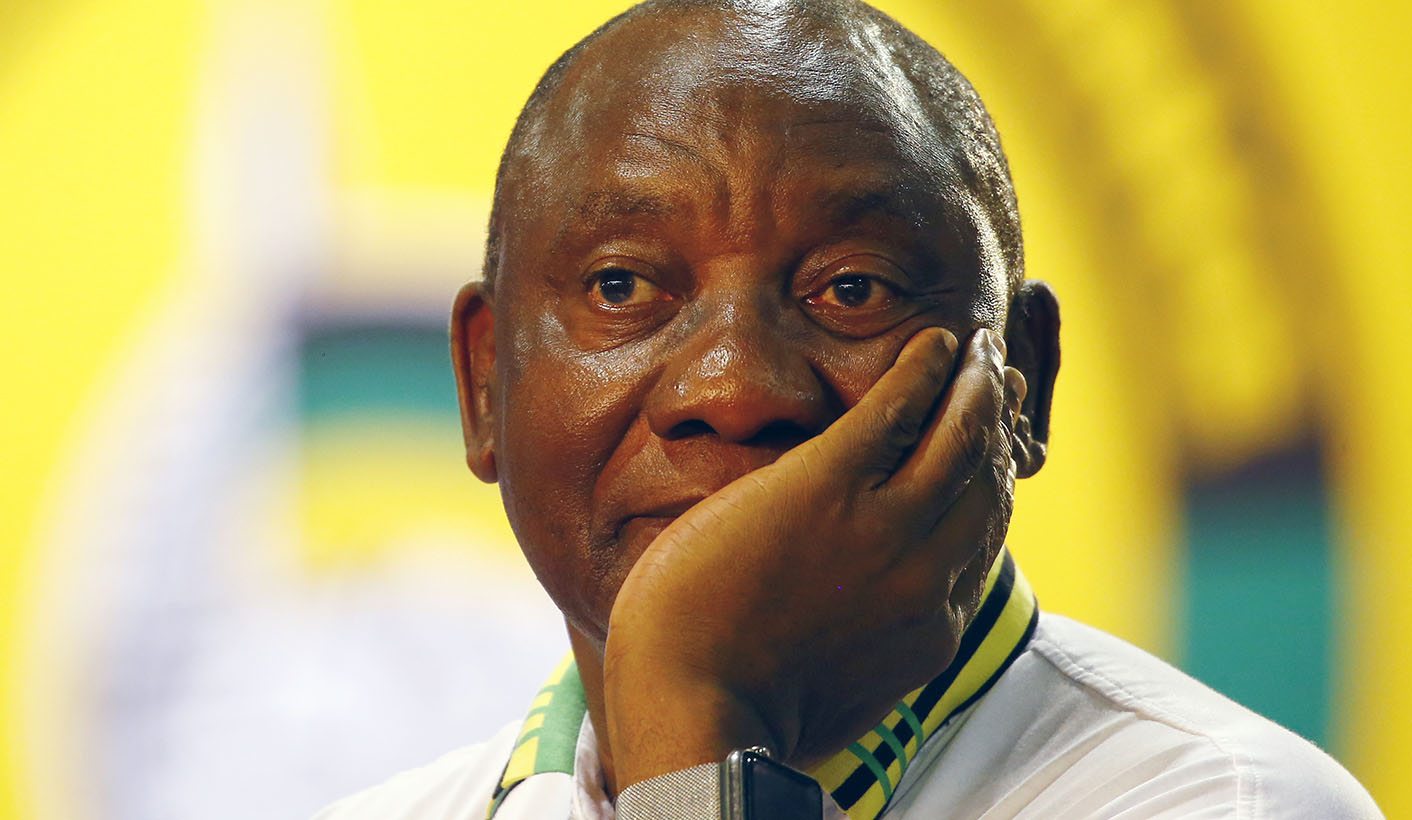 Cyril Ramaphosa is the ANC’s 13th president of a Top Six leadership that, on the surface, appears to boost unity, but might ultimately hinder the fight against State Capture. The 80 additional members to be elected to the national executive committee in the next day or two will be even more important now. By CARIEN DU PLESSIS.

By the time Cyril Ramaphosa (with 2,440 out of the 4,776 votes) was announced as the new ANC president on Monday, social media and a TV news station already had the story for an hour or two. Celebrations were somewhat muted, perhaps because delegates were tired of the sing-offs that happened in the two hours of waiting, or maybe people were just hot. Nasrec Expo Centre usually only gets the aircon right at night, when things have cooled down anyway.

President Jacob Zuma, sitting on the conference floor in the front benches next to his daughter after the Electoral Commission asked the leadership to step down, was looking uncharacteristically anxious – almost hyperventilating – as Ramaphosa walked onto the stage. There was jubilation in the hall, but Zuma couldn’t even muster as much as a polite clap, and his attempt at smiling only produced a half-grin. One of his younger daughters, who was sitting in the front row with the other siblings a few chairs away from him, moved to sit right next to her dad after the announcement was done.

Ramaphosa himself didn’t exactly exude jubilation himself. Perhaps he’d already known that Mpumalanga premier David Mabuza would be announced as his deputy.

Mabuza wasn’t his first choice, and human settlements minister Lindiwe Sisulu probably wasn’t either, but she ended up being the one on his slate. Like ANC MP Nkosazana Dlamini Zuma, Sisulu lost out on the position she was nominated for by a couple of hundred votes.

Mabuza polled the most votes of everyone in the Top Six, with 2,538 votes, making him perhaps one of the most powerful.

Ramaphosa, for one, was always said to have been lacking a real grassroots support base, and when he got into the deputy presidency in 2012, it was partly Mabuza’s doing. He was also on the then-powerful slate of President Jacob Zuma, which made him a shoo-in.

There were rumours that it was Mpumalanga that, at the eleventh hour, swung the vote in Ramaphosa’s favour with its wild card “unity” nominations. Would Ramaphosa be able to shake off this indebtedness to Mabuza? An aide of Ramaphosa privately admitted it would be tough.

Ironically, it could have been one of Dlamini Zuma’s actions against bad governance and suspected corruption that might have cost her the presidency. In 2010, when she was home affairs minister, she cancelled a R4-billion contract between her department and GijimaAst after the company had not been performing in its Who am I online? contract, and after various irregularities were uncovered.

GijimaAst belonged to Mpumalanga businessman Robert Gumede, a close associate of Mabuza, and word is that Gumede has never forgiven Dlamini Zuma for this, even though the contract was later partially reinstated. While many in his province were behind her (she had nominations from 100-odd branches, but “unity” had about twice that), Mabuza himself never pronounced in her favour. On Sunday night, just before the voting, he finally revealed his true colours.

Free State premier Ace Magashule was the big surprise of the day, beating former KwaZulu-Natal premier Senzo Mchunu by a mere 24 votes. Even Mchunu had to do a double-take, walking up to the stage to check the figures.

Magashule has been close to Zuma and even closer to Zuma’s friends, the Gupta family, to whom the Free State government channelled R84-million via a controversial dairy project. He is now the man who will be charged with the affairs of the party full-time – arguably one of the most powerful positions in the ANC.

His deputy, incumbent Jessie Duarte, has also been a defender of the family.

Newly elected treasurer-general Paul Mashatile, who with Mabuza and former ANC treasurer-general Zweli Mkhize was part of a “unity” project in the party, and newly elected party chair, Gwede Mantashe, are the only two others on this slate that have spoken out against State Capture. Mabuza accepted a ride to Russia in the Gupta family’s private jet when he was deadly ill after being poisoned and too sick to fly commercially. He later, however, distanced himself from the Guptas.

Immediately after the party’s chaplain-general Vukile Mehana had said “amen” to his prayer, nominations for the 80 additional members on the national executive committee started.

It is this structure which, in 2008, was responsible for the recall of former president Thabo Mbeki, and it’s the same structure that would have to decide whether Zuma is to step down. Zuma himself, at the party’s gala dinner before the conference started, intimated that he fully expected to stay on as the country’s president until 2019 when he said he would write a book on his time as president in a year-and-a-half.

Getting rid of him would therefore not be easy, but for him to continue as the country’s president with Ramaphosa as his deputy would also be untenable.

The rift between the two is too deep, unless they can find some miraculous way to manage the two centres of power between party and state.

The ANC has already ruled out a vote of no confidence in Parliament as an option, so the NEC it will be.

There is a very diverse mix of ANC leaders that were nominated as additional members, from Dlamini Zuma, who gracefully accepted her nomination, and her campaigners like Pule Mabe and Tony Yengeni, to outspoken anti-state capturists like former finance minister Pravin Gordhan and his former deputy, Mcebisi Jonas.

Earlier in the conference there was a fight about taking pieces of paper with the 80 names of their chosen slate that delegates should vote for into the voting booths. The party wanted to forbid this because it encouraged slate voting, but Dlamini Zuma’s people pushed for it to be allowed. Now this has become even more important than before, and could be the difference between the NEC asking Zuma to step down or to stay.

Just before the election results were read out, Zuma launched into a very spirited rendition of his trademark Mshini Wami. That is the song of a man ready to fight. DM