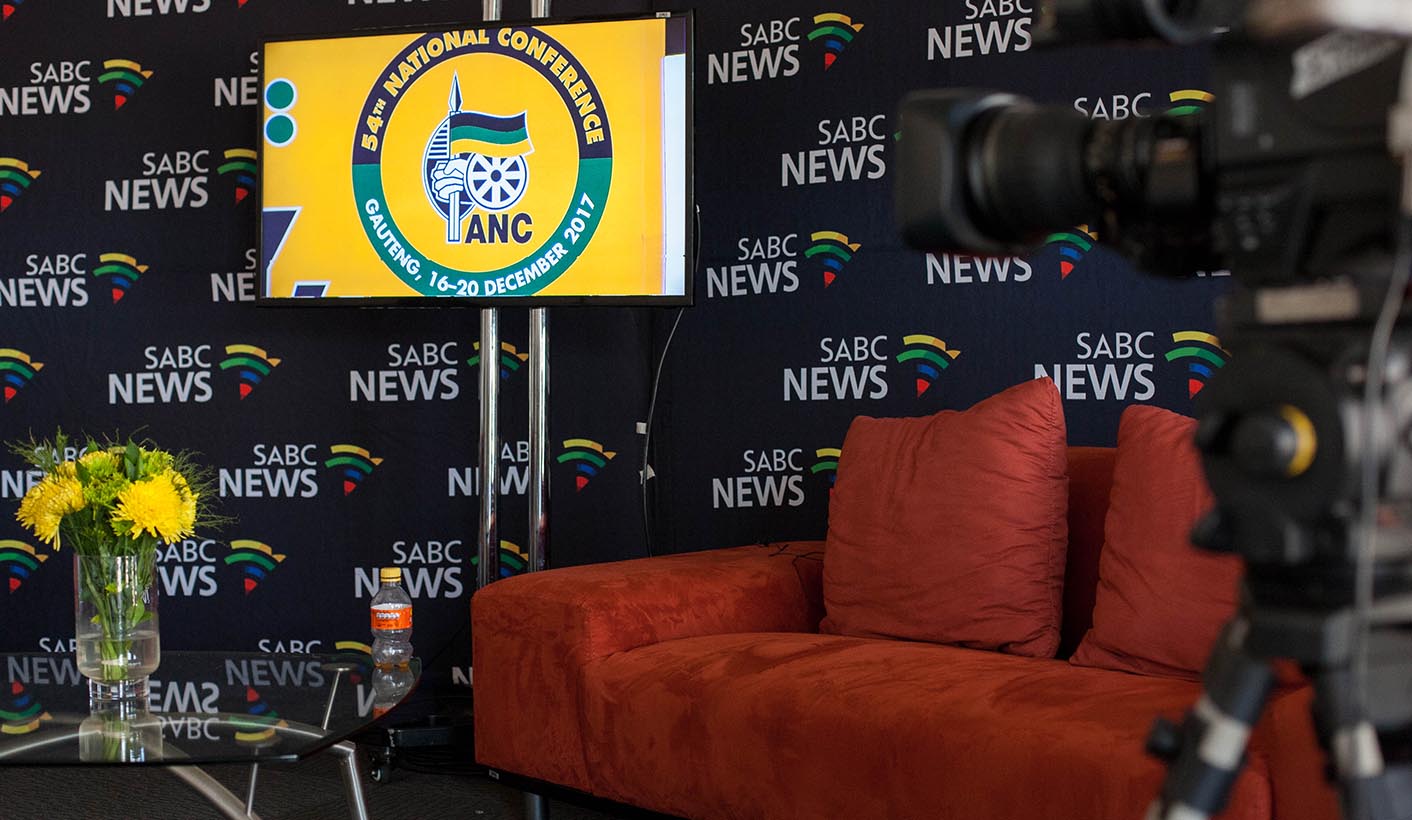 Organic political pundits and ordinary citizens who found themselves far away from the centrifugal political forces at Nasrec this weekend could plug into events at the ANC's 54th elective conference pinned to their couches watching rolling 24/7 coverage on television. Three of the country's channels, the public broadcaster the SABC, as well as two independent stations, ANN7 and eNCA, brought events into our homes. Much of the early coverage featured a bouquet of political analysts/sangomas who tried to make sense of the numbers and the direction of the winds of change about to blow across the country. BY MARIANNE THAMM.

For the embattled public broadcaster, covering this crucial elective ANC conference in the aftermath of hurricane Hlaudi was always going to be about clawing back independence, relevance and restoring the credibility of the brand. Over the marathon weekend at the ANC’s 54th elective conference at Nasrec, SABC journalists and anchors did their best to chart a balanced and thoughtful course through the apparent chaos in spite of the Hand of Hlaudi still hovering.

It didn’t start well though.

On Friday night the SABC flighted Jacob Zuma’s final interview as the party’s president conducted by an old Motsoeneng Tsar, the public broadcaster’s head of politics, Mzwandile Mbeje. It was a long and rambling 75-minute affair with a relaxed Zuma recounting his personal and political history.

While some felt the interview provided space to showcase a “valedictory” Zuma, veteran journalist and author of the book of the year, The President’s Keepers – Those keeping Zuma in Power and Out of Prison, posted a scathing critique of the interview on Facebook labelling Mbeje as a “disgrace to journalism” and that he should apply for a job at ANN7.

“SABC television news head of politics Mzwandile Mbeje is an old Motsoeneng stalwart and was ‘presidential correspondent’ throughout his tenure. Mbeje is close to Zuma and throughout the 2014 election he presided over the suppression of the EFF on SABC news. It is impossible that he could ever be objective on Zuma,” wrote Pauw.

Pauw then posted an extract from the interview:

Mbeje: You are a human being as well. You also make mistakes. What do you say that during my tenure is my biggest regret?
Zuma: I am not sure, unless somebody tells me what it is that I’ve done. During my tenure I’ve tried my level best. I’ve tried to make a contribution and I’ve tried to be very composed. As you can see I don’t respond to people.
Mbeje: Is there anything during your tenure you could have done differently?
Zuma: In everything, once you have done it, afterwards that’s what you think.

Pauw let rip: “Not a single word in an interview of more than an hour about Nkandla, State Capture, the looting of the state coffers, the devastating court judgments against the President, Zuma’s destruction of the law enforcement agencies, unemployment, the weak economy or multiple downgradings.”

He concluded that the new board, served by credible journalists like John Matisson and Mathatha Tsedu, could not allow Mbeje to continue working as the head of politics.

“They cannot allow the likes of Mbeje to continue working as the head of politics.
If the SABC have any hope in hell of turning the SABC into a public broadcaster, people like Mbeje must go.”

Motsoeneng’s tenure was always going to leave a sillage (a lingering odour) but overall the SABC team in studio and on the ground at Nasrec brought insightful and incisive insights and commentary throughout the weekend.

Interviewed on the channel, SABC head of news, Kenneth Makatees, who has also been accused of attempting to “recapture” the public broadcaster after Motsoeneng’s ousting by meeting privately with Zuma’s office in October this year, said the public broadcaster attempted to bring news to viewers in a “factual and balanced way” and that “we are playing it in the middle”.

Truth be told that was the only way anyone could play it as an echo chamber of analysts from across the country refused to be drawn into making any predictions about who would emerge victorious as the new leader of the ANC. Numbers were crunched and re-crunched as journalists, analysts and various other academics and experts attempted to unpack the ANC’s internal voting traditions. Leaders were closely watched, their gestures analysed, their statements picked apart and interpreted.

SABC anchors Sakina Kamwendo and Aldrin Sampier were particularly impressive. Television is a voracious medium, it needs colour, sound, and energised and animated hosts who can project energy levels through the ether.

For this they have to possess a modicum of personality and knowledge of the key players and issues in the unfolding drama. They also need to ask uncomfortable questions of interviewees and guests and in this regard Kamwendo and Sampier were exemplary. Relaxed, knowledgeable, authoritative, witty and self-possessed.

The SABC’s other team on rotation was the Morning Live duo of Leanne Manas and Peter Ndoro who always sounds like he’s floating in a pool on an inflatable pink flamingo sipping a cocktail. Manas and Ndoro are a solid, albeit not exactly electrifying double act.

Covering the Nasrec conference was a mammoth endeavour which the SABC, given its recent financial, operational and political troubles, managed, with a solid team of on-the-ground reporters, to pull off. It broadcast in 13 languages from seven OBE vehicles for radio as well as churning out content for its digital platforms. For that we, the public, have the dedicated and pressured journalists to thank. Amid a threatened strike by journalists, coverage of the conference was without hitch or glitch.

If you were looking for an emergency political analyst this weekend for a quick opinion you would have been hard-pressed to find any as a steady stream puckered studio seats.

ANN7 was well, ANN7, with its pinging and exploding graphics, one-dimensional over-decorated studio and automaton bot hosts who crouched behind their branded laptops allowing a steady stream of regular pro-NDZ pundits, including Carl Niehaus who was a semi-permanent fixture throughout the weekend, to wax lyrical without interrupting or interrogating statements and opinions.

The air was thick with rhetoric about RET without ever really unpacking what this means – a bit like their chosen candidate. Other ANN7 fixtures included editor-in-chief of The New Age and ANN7, Moegsien Williams, Jackie Shandu, Zamo Madlala and Kim Heller who served more as echo chambers for the station’s political positioning.

Even approaching ANN7 with an open mind could not dispel thoughts that one was rubbernecking at the scene of a pile up. The channel stuck to its NDZ mandate loyally and in that regard provided insight into the currents that have preoccupied that slate. There was little dissection of the major issues that swirled around this conference, the court judgments relating to President Zuma (apart from the predictable “judicial overreach” mantra) and the industrial plunder of the state. Corporate thievery however, was unpacked with relish, without the penny dropping that both are corrosive scourges.

South Africa’s independent commercial channel, eNCA was by far the leader of the pack with a distinguished team of journalists in studio, at the venue itself and offering insights into developments. eNCA’s resident political experts Karima Brown and Angelo Fick rotating at times with academic Susan Booysen and Khaya Sithole (with his distinquishing Springbok headband), puppet Chester Missing (skin lightened and with blue eyes and brought much-needed comic relief),Tasneem Essop and Sithembile Mbete who brought their experience and inside knowledge of the ANC and its history and workings to an at times, befuddled public.

Between the talking heads eNCA flighted a vox pop of ordinary South Africans, asking if they knew who the two main candidates were. An alarming number had no idea who Nkosazana Dlamini Zuma (Zuma’s daughter, offered one compatriot) and Cyril Ramaphosa were.

A few new terms popped up including the use by ANC spokesperson Zizi Kodwa of the Communist Party Of China’s description of powerful leaders and bureaucrats as “tigers and flies” who were targeted in president Xi Jinping’s campaign against corruption in the party.

Of course the real news occurred far from public view in various WhatsApp groups where delegates communicated and speculated with each other as well as other trusted insiders, including journalists.

In the lead-up to the announcement of the new top six leaders, much of the focus was on process and numbers with some touching on the context of state capture and corruption of the Zuma era.

This is bound to be a matter that will gain more traction among journalists, commentators and analysts once these results – expected later on Monday – are announced. The country’s democratic future will hinge on how the new leadership of the ruling party will deal with the deep rot that resulted in this historic elective conference with its original seven presidential contenders.

The important issue to bear in mind is that South Africans this weekend were exposed to a free press offering a variety of points of view of a leading party in crisis at a critical moment in the country’s history. We have indeed come a long way. Will we turn the corner, or be led down a cul de sac? Stay tuned. DM

Photo: The set up at Nasrec for the SABC’s live coverage of the ANC’s 54th elective conference. Photo: Greg Nicolson.