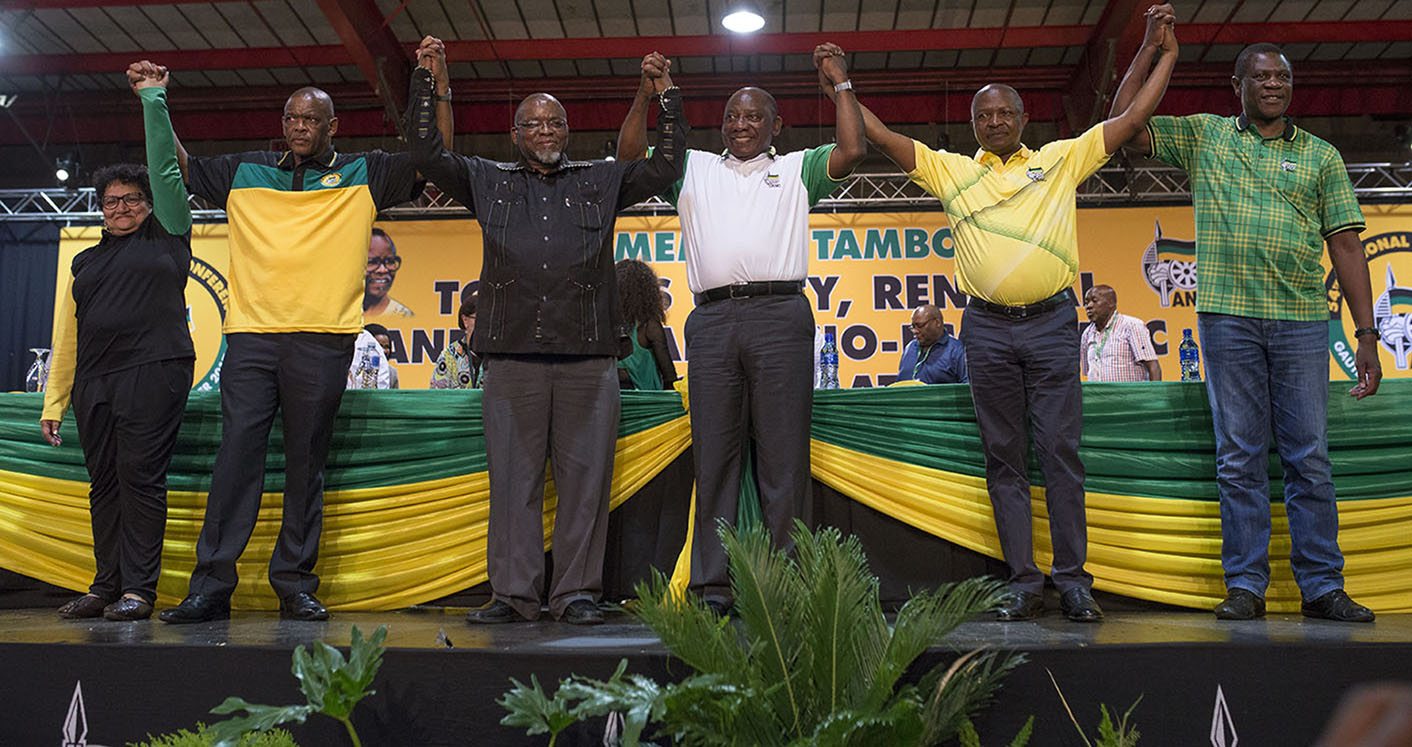 It was always a tight race but after Sunday’s nomination and Monday’s voting and counting, it has come down to the following six to lead the ANC over the next five years. By GREG NICOLSON.

South Africa’s Deputy President Cyril Ramaphosa has been known as a skilled negotiator since he was a founding member of the National Union of Mineworkers (NUM) in 1982. He helped build the union into a behemoth and took on apartheid’s mining magnates, a precursor to the battles he led with the National Party while negotiating the path to democracy.

He was elected ANC general secretary in 1991 and worked closely with former president Nelson Mandela. Ramaphosa was Mandela’s chosen successor but after the party decided to appoint Thabo Mbeki as deputy president, with the ANC’s blessing he resigned as secretary general, left active politics and became a business tycoon. In 2015, Forbes estimated that he had a net worth of $450-million.

He had a significant stake in platinum company Lonmin when 34 mineworkers were killed in Marikana in 2012, with another 10 people killed in the preceding week during a strike. The ANC elected him deputy party president months after it emerged that Ramaphosa had lobbied the police and resource ministers to take “concomitant action” and intervene in the strike. The Marikana Commission of Inquiry said he hadn’t caused the deaths. He was publicly criticised for failing as Lonmin’s transformation chair to improve miners’ living conditions.

As deputy president, Ramaphosa has largely avoided scandal, but as DA leader Mmusi Maimane has said, at best he’s been a silent leader and at he has been complicit in the scandals of President Zuma’s administration. He has led a campaign based on clean governance, anti-corruption and his potential to attract business investment to boost the economy.

Ugandan President Yoweri Museveni introduced Ramaphosa to breeding Ankole cattle and he has called the breeding programme at his Mpumalanga game farm his “proudest achievement”.

ANC Mpumalanga chairperson and premier “DD” Mabuza seemed to enjoy his newfound power in the party’s national election race, remaining cagey throughout the campaign period about who he supported. Hundreds of branches in his province nominated a candidate called “unity” to lead the party instead of backing Dlamini Zuma, Ramaphosa or another candidate.

Mabuza is part of the “premier league” that has backed President Zuma. He hasn’t been associated with the Gupta family but has been linked to a series of scandals. In 2010 an alleged R14-million was stolen from his house. He is said to run his province with an iron fist.

Mpumalanga has the second most delegates at the national conference after KwaZulu-Natal. The province’s delegation sky-rocketed from 2012, leading to questions over whether processes were manipulated.

While the Mpumalanga delegation was said to favour current treasurer general Zweli Mkhize as a unity candidate, Mabuza’s ambitions to lead have always been clear. In 2015, the premier was allegedly poisoned and had to take two months off work.

Magashule is one of the most controversial figures in contention for a Top Six position. The current Free State Premier has been embroiled in one corruption scandal after another. It says something that Dlamini Zuma loyalist, Police Minister Fikile Mbalula, posted a series of tweets in June this year pleading with the ANC not to elect Magashule as secretary-general, saying Magashule “will finish what is remaining of our movement”.

In 2015, Magashule enjoyed the use of R8-million of public money for an aesthetic upgrade of his Free State residence. In defending the bill, the Free State government said that Magashule needed a new swimming pool because his existing one was “too large and unnecessarily deep”.

That scandal was small beer compared to Magashule’s record in the State Capture scandal, where he emerged as one of the key figures of the #GuptaLeaks emails. AmaBhungane and Scorpio detailed how the Guptas lavished Magashule’s sons with gifts and financial rewards in exchange to opening doors to the Free State government for them. It was under Magashule’s watch that the Guptas were given a free piece of Free State land and R184-million of taxpayers’ money to start a bogus dairy farm.

Magashule holds an honorary doctorate in philosophy from a Turkish university. When the title was bestowed upon him earlier this year, the provincial government said the honour was “long overdue”.

The 64-year-old Duarte is the incumbent ANC deputy secretary-general.

Duarte is a long-serving member of the ANC’s NEC, having been first elected on to the committee in 1999. Post-liberation, her first role was within Gauteng’s provincial leadership, from where she became the Gauteng MEC for safety and security. A stint in the diplomatic corps followed, as High Commissioner to Mozambique. She continued her international involvement as deputy director-general in the then Department of Foreign Affairs.

In 2007, Duarte became for the ANC, a position she held for two years before being appointed as Chief Operations Officer in the Presidency in 2009. She has served as deputy secretary-general of the ANC for five years at of writing.

An accountant by training, Duarte cut her teeth at a young age within the banned ANC during apartheid. In the democratic era, her political career has not been free from scandal. While Gauteng MEC she allegedly lied about her involvement in a car accident using a state vehicle.

More recently, eyebrows were raised when it was revealed that her son-in-law, Ian Whitley, had been appointed as chief of staff for Minister Des van Rooyen. Duarte was also seemingly implicated in the State Capture scandal when it was alleged that she had offered deputy finance minister Nhanhla Nene the role of finance minister in collaboration with the Guptas.

In his 10 years as secretary-general, “Uncle Gweezy’s” hoarse voice and bizarre analogies have become synonymous with the ANC. He often greets journalists in person when he walks into a press conference and conducts weekly tours of the floors of the ANC’s Luthuli House to speak to employees.

Like former secretary-generals Kgalema Motlanthe and Ramaphosa, Mantashe was general secretary of NUM before he was elected to the ANC’s top administrative job in 2007 in Polokwane. His career began as a migrant worker who left his Eastern Cape home in 1975 to work in the mines. He has also served as chairperson of the SACP.

Mantashe has overseen one of the worst times in the ANC’s history, beginning with Thabo Mbeki’s recall in 2008 and continuing until 2017 when allegations of corruption related to the ANC-led government have reached a crescendo. Under Mantashe and Zuma’s the ANC has split, with both Cope and the EFF breaking away. The ANC has seen a continued decline at the polls.

He announced this year that he would not contest the position of secretary-general and would only avail himself as chairperson. He still wields significant power within the party. Mantashe recently dismissed allegations that he had a sexual relationship with a 23-year-old student and was acting as a “blesser”. During his tenure as SG, “to Mantash” entered the public lexicon, meaning “to reverse your position”.

The ANC’s Gauteng chairperson has had a quiet five years since he ran for a top six position at the party’s national conference in 2012 and lost. The former Gauteng premier came out strongly against President Zuma and his province supported then deputy president Kgalema Motlanthe in the contest for president.

Mashatile was replaced as minister of arts and culture and moved to Parliament’s backbenches before returning to Gauteng to serve in Premier David Makhura’s government as MEC of human settlements and co-operative governance.

The Gauteng ANC made it clear it would support Ramaphosa’s campaign and has come into the elections more united than most provinces. Mashatile and Gauteng ANC chairman David Makhura have held consistent positions – well, generally consistent – in opposing Zuma’s faction in the party.

Mashatile is sometimes associated with the “Alex Mafia”, the group of former political activists who worked in the Johannesburg township and have since risen to become influential. DM