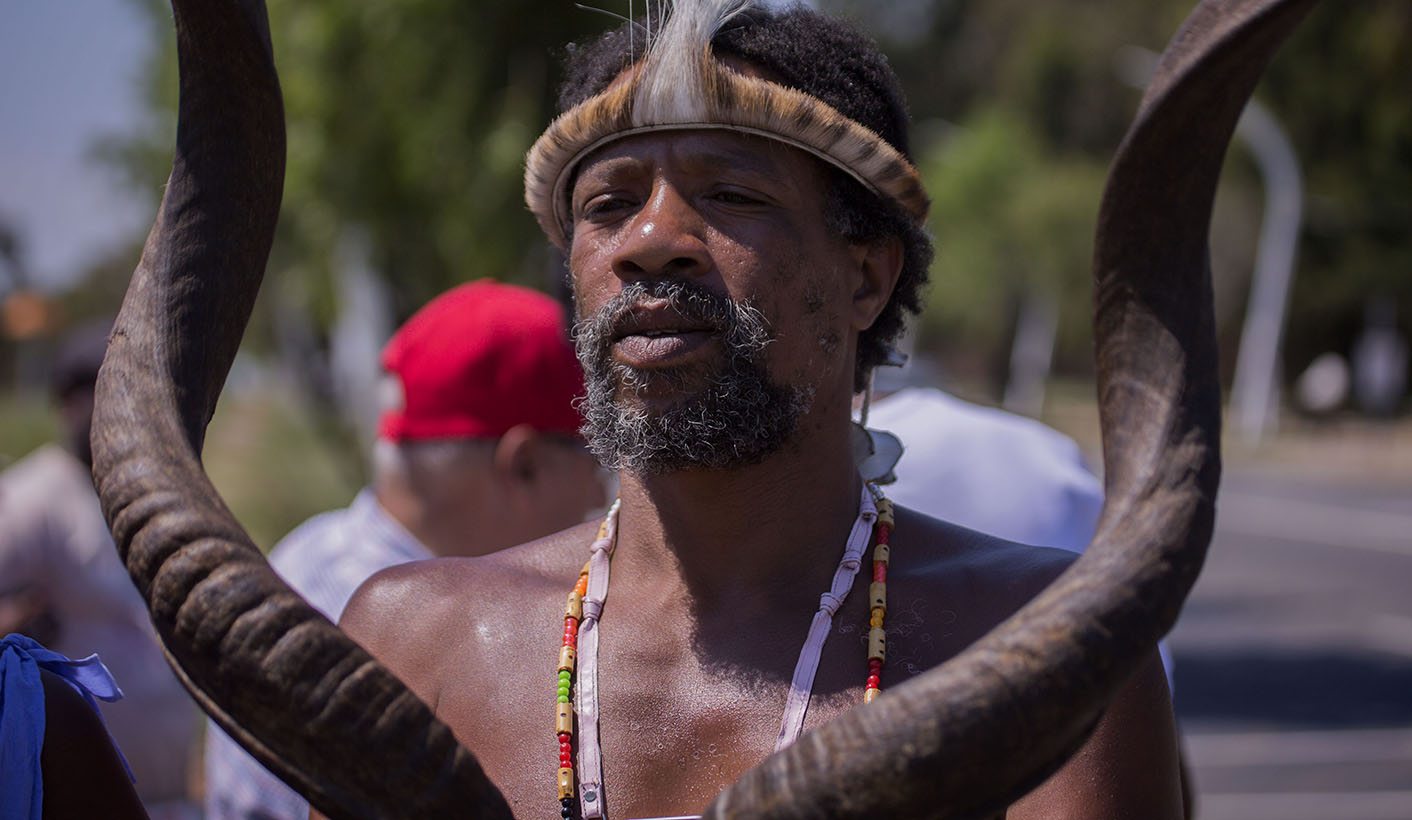 As vote counting continues inside the Nasrec Expo Centre in Johannesburg to determine the new leadership of the ANC, outside, in a far-off designated safe area, the Khoisan Liberation Movement staged a protest for the rights of the indigenous group. By NKATEKO MABASA.

Because of their number, about five, one could almost overlook the group of protesters dressed in animal skins outside the Nasrec Expo Centre, in an area designated by police for protests.

Over the past three days, the small group has been holding up placards calling on President Jacob Zuma to meet with them to discuss the rights of the indigenous group.

The previous week, three Khoisan men made a three-week pilgrimage on foot from Port Elizabeth to the Union building in Pretoria to submit a memorandum of demands to Deputy President, Cyril Ramaphosa.

The Khoi-San and Traditional Leadership Bill (TKLB), which was passed in the National Assembly only a month ago, has sparked controversy. The Bill is aimed at recognising the Khoi-San community but the protesting group believes it does the the opposite, and may further entrench apartheid discrimination.

The Khoisan Liberation Movement is an organisation made up of the Khoisan Unity Movement and the Khoisan Mass Movement who have joined forces for the purpose of displaying their displeasure with the Bill.

Anthony Williams, the convener of the Khoisan Liberation Movement, believes that when the country transitioned into democracy there were some things left unchecked.

“The bill seeks to give recognition to the leaders of the Khoisan,” says Williams. However, he believes this is meaningless without “statutory recognition” of the people. “You cannot recognise the leaders of a people without recognising the people themselves,” he said.

The Khoisan Liberation Movement has rejected the Bill, arguing that it distracts from the main issues and demands of the Khoisan people. They demand that the ANC sign the ILO161 convention Bill of the United Nations which “gives statutory recognition to indigenous people of a particular country”.

What this would mean is that the Khoisan should be recognised as first inhabitants of South Africa and therefore have first claim to the land and should be granted the rights to it. “With all its illustrious and impressive struggle credentials of the liberation movement, they refuse to rectify that piece of law,” says Williams.

Hanif Manjoo, the chairperson of the Khoisan Unity Movement, says the problem started in 1969 during the ANC Morogoro conference in Tanzania. At this particular conference, the ANC adopted a policy of “black people in general and Africans in particular”.

Black people, which includes all non-white racial groups, were guaranteed rights in the envisioned ANC liberated South Africa; however, Africans were given privilege due to the nature of their oppression. “Our people still face discrimination, we are regarded as either bushmen or coloureds,” said Manjoo.

The Khoi-San and Traditional Leadership Bill was adopted after consultation with the National Khoisan Council and Khoisan Leadership. However, the Khoisan Liberation Movement refuses to recognise the NKC as the legitimate voice of the Khoisan people. “The NKC has conceded to the Bill but is not aware of the implications of that bill, they do not even have a legal body advising it,” says Williams.

The group claims to have approached Gwede Mantashe to meet with them, but has not received a response.

“At this conference, we want to submit our memorandum to the incoming top six leadership,” says Williams.

When asked for comment on the demands, ANC spokesperson Zizi Kodwa said he was not aware of the protesters or their demands. DM