#ANCdecides2017: Hybrid Top Six has elements of both slates as opposition parties talk tough with their eyes on 2019 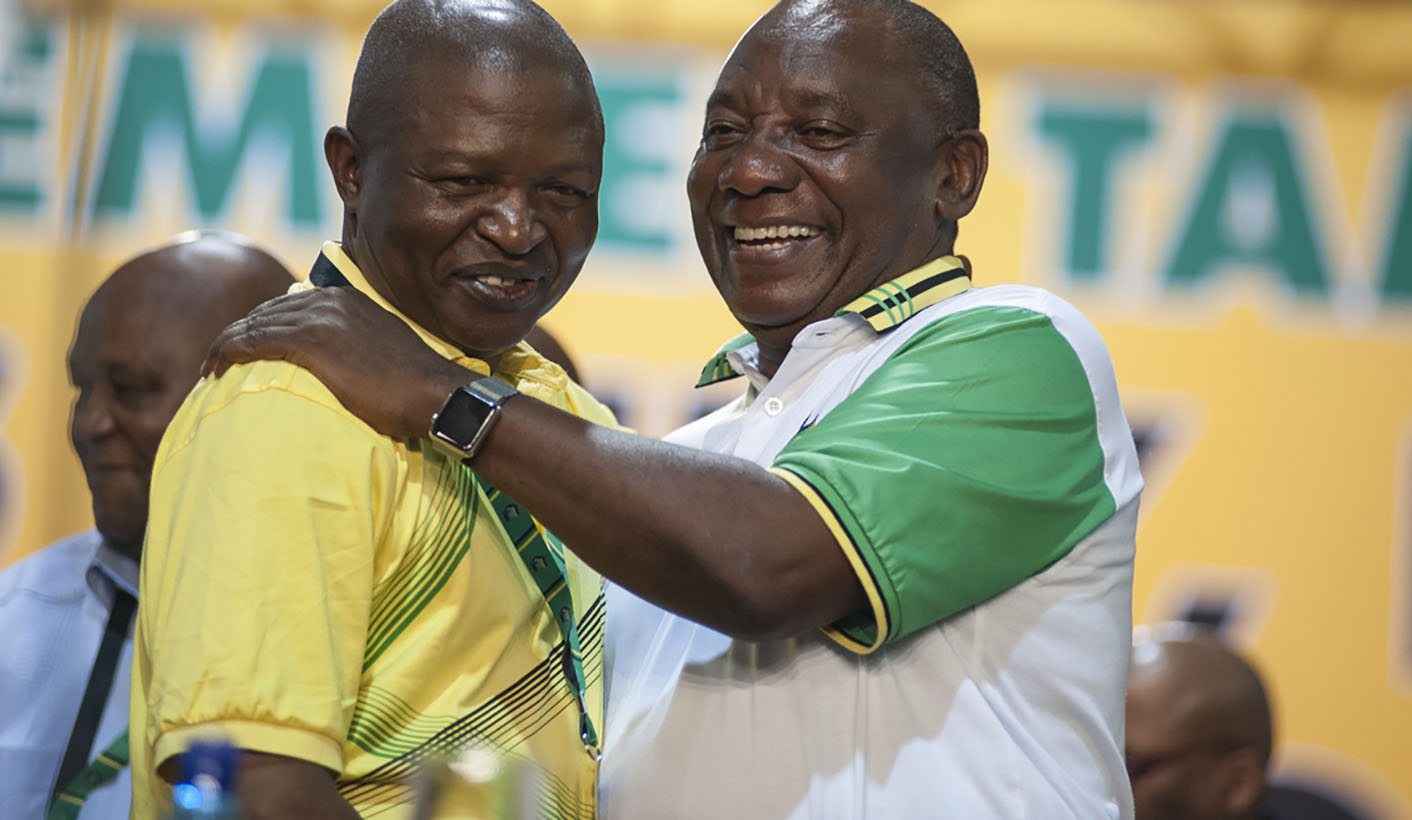 The cheers and jubilation didn’t last long after the ANC top six officials were announced and did the traditional post-leadership contest photo op – joined hands raised up in the air. After almost two hours of passionate energetic singing and counter-singing by supporters waiting for the official announcement, the atmosphere turned tepid, and it was on to the next election process for the 80-strong National Executive Committee (NEC) after a short prayer. The hotly contested top six positions delivered a mixed bag of two slates combined – one that could be used to emphasise unity, but also one that could open the door to a terse road to the 2019 elections. By MARIANNE MERTEN.

There was that awkward moment when former KwaZulu-Natal Premier Senzo Mchunu was carried on the shoulders of supporters towards the stage. But it was Ace Magashule, currently the Free State Premier, who had clinched the secretary-general post with the narrowest of margins – 24 votes.

Mchunu later went on stage and was seen chatting with the staff of the election agency. But it was done: he had clinched 2,336 votes against Magashule’s 2,360. And those little hand-drawn posters proclaiming “CR (Cyril Ramaphosa) for president, Senzo for SG” quickly disappeared. It was the rolling call of “Aaaace, Aaace…” – which has become Magashule’s trademark – that held the moment.

In ANC tradition the outgoing top six officials and NEC left the stage they occupied for the past three days after the ANC election commission head Sindiso Mfenyana officially dissolved the structure just ahead of the announcement of the leadership elections results. And so for a short while even President Jacob Zuma sat like an ordinary member among the just over 4,700 voting delegates and guests.

Zuma and his deputy in government, Cyril Ramaphosa, will no longer share a cuppa tea on stage at an ANC event as they did on Monday evening, waiting for the election results. The 10 minutes the outgoing national chairperson Baleka Mbete said it would take before the winners were announced ultimately took an hour and 45 minutes.

Then South Africa’s Deputy President Cyril Ramaphosa was announced as the new ANC president, with 2,440 votes against ANC MP Nkosazana Dlamini Zuma’s 2,261. The outcome confirmed the tightness of the race, and the rousing cheers the relief.

In ANC tradition Ramaphosa was led to the stage to take his place. Then it went on to the deputy position, and when Mpumalanga Premier David “DD” Mabuza was announced, the plenary hall erupted in shouts of “DD, DD, DD…”.

Lindiwe Sisulu, who joined Ramaphosa as deputy at the 11th hour, looked disappointed, but remained gracious, only to be heard expressing her disappointment that only one woman had made it into the top six officials. The ANC has a 50:50 gender policy.

“We did the right thing and voted for a woman,” said one KwaZulu-Natal delegate walking out of the plenary hall. “We are happy,” said another delegate from the Veterans League: “Now it’s time to sleep.”

The energy had dissipated. After almost two hours of waiting for the official results – word has it there was more than one recount – the singing indicated the results were anticipated by delegates, at least for the top post. The song associated with Dlamini Zuma that it was time for her to rise, got some new words “Unity, maqabane (comrades)”. Perhaps it was a final push to close the campaign on a high. But not everyone was all that happy.

One delegate took verbal pot shots at journalists, dishing out criticism for how “our candidate (Dlamini Zuma)” had been portrayed. Another delegate, acknowledging that the new top six ANC officials represent both contesting camps, simply said: “Things have turned.”

Dlamini Zuma was clearly disappointed. As were her supporters, such as Lindiwe Zulu. Losing treasurer-general candidate Maite Nkoana-Mashabane, who was on Dlamini Zuma’s slate, was overheard saying: “It was a good fight,” as fellow ANC Women’s League and Cabinet member Edna Molewa chipped in: “It was a very good fight.”

The disappointment was visible in everyone’s face. But there’s protocol. The losers publicly congratulate the winners – sometimes there’s a hug, and a few words said as between Dlamini Zuma and Ramaphosa after their hug.

Ramaphosa earlier had shared a close hug and words with Mabuza, and with former secretary-general Gwede Mantashe, who returned to the stage as national chairperson.

There were smiles, but clearly also moments of reflection.

EFF Deputy President Floyd Shivambu tweeted his congratulations, adding, “It will however be easier for a camel to pass through the eye of a needle than for you to become RSA President. The EFF is already on the ground.”

Reaction from other opposition parties was also swift.

DA leader Mmusi Maimane said Ramaphosa’s election was too little too late as the ANC was a divided party. “Ramaphosa’s first act as ANC president must be to recall Jacob Zuma as president of South Africa, prosecuting him for his corruption charges, and jailing him if he is found guilty. If he fails to do so, Ramaphosa will show South Africa that the leaders in the ANC are all friends, and they practise their corruption together,” said Maimane.?

The Freedom Front Plus leader, Pieter Groenewald, didn’t mince his words either, saying that even as Ramaphosa’s election would boost investor confidence, “drastic steps” were needed, including recalling Zuma as the country’s president, and dealing with State Capture and Zuma’s promise of free higher education. “If Ramaphosa does not recall Zuma, his hands will essentially be tied behind his back…”.

And the South African Municipal Workers’ Union (Samwu) also ratcheted up the pressure, calling for the implementation of the National Health Insurance plan to provide quality healthcare for all. “Gone are the times when trade unions and workers would find it difficult to campaign for the ANC, given challenges of the organisation, in particular leadership and scandals which (have) taken away the hope and confidence that South Africans had in the party. We believe that this victory would make it easy for us to sell the ANC to our people,” the trade union said in a statement.

The focus for #CR17, now ANC president Cyril Ramaphosa, was moving ahead. Or as ANC Chief Whip Jackson Mthembu tweeted: “The process to renew, unite and rebuild our ANC starts today.”

After a briefing on voting for the new NEC, first it was time for dinner for delegates. The 54th ANC national elective conference continues until Wednesday, when the governing party’s newly elected president Ramaphosa will deliver the closing address. DM