#ANCdecides2017: Gwede Mantashe a happy man as stint as... 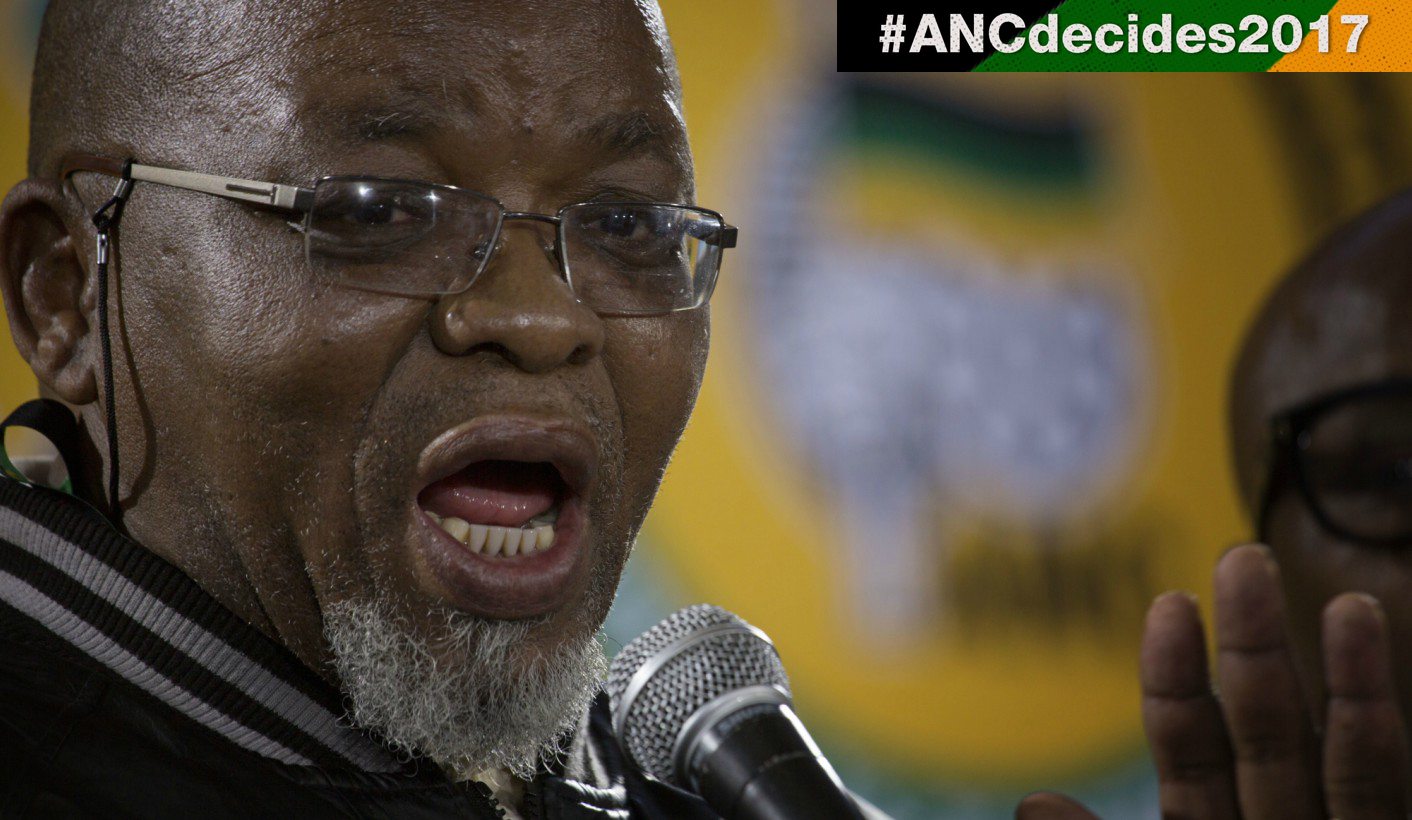 In a final briefing at Nasrec on Monday, the man who has spent the last 10 years as the most public face of the ANC bid farewell to his frenemies in the media. Gwede Mantashe hopes to return as ANC chairperson, filling the shoes of the outgoing Baleka Mbete, but his time in the spotlight as Secretary General is over. Though the purpose of the briefing was ostensibly to discuss Mantashe’s Organisational Report of the ANC, it really served more as a chance for Mantashe to reflect on his years in the role. By REBECCA DAVIS.

Although Gwede Mantashe is no longer Secretary General, ANC spokesperson Zizi Kodwa joked on Monday that he was “SG for life” – because Mantashe’s first names are Samson Gwede.

Joking that he was now unemployed, Mantashe instructed media houses: “If you need an editor, call me.”

In reality, Mantashe may only be technically unemployed for a matter of hours. If he defeats rival Nathi Mthethwa in the Top Six elections, he will return to ANC leadership in the position of ANC chair as part of presidential contender Cyril Ramaphosa’s slate. As ANC chair, he would be taking over the role from Baleka Mbete, who has been doing double service as the Speaker of Parliament simultaneously.

Asked by puppet Chester Missing if he shared his potential predecessor’s affection for bouncers to resolve disruptions, Mantashe cracked: “I will use soldiers.”

Mantashe was in generous mood, refusing to be drawn on the suggestion that his relationship with President Jacob Zuma had broken down irretrievably. Instead, he suggested that the media had failed to appreciate some of Zuma’s valuable qualities.

“Because of the negative narrative that has been thrown at President Zuma, one thing you will never appreciate is the deep knowledge of the man about the ANC,” Mantashe said, terming the outgoing ANC president a “repository” of vital information and insights.

“With Zuma you will not have the problem of the ability to talk to the masses. That is a rare gift,” he continued, adding somewhat backhandedly: “Sometimes you can be intellectual and lose that aspect.”

Addressing issues related to his Organisational Report – which has not formally been released to the public, though Daily Maverick obtained a copy last night – Mantashe expressed his hope that the Nasrec conference would strengthen the organisation.

He said one of the ANC’s greatest concerns was that the party would continue to lose support in the urban centres and “be relegated to a rural party”.

Mantashe reiterated positions expressed in the Organisational Report about Nkandla and State Capture. Nkandla was the result of project mismanagement and cost inflation; State Capture was “a debate that continues to divide us”.

On the topic of State Capture, however, he proceeded to take a more resolute stance than in the report. “It exists,” he said. “The ANC cannot be seen to be flatfooted on the matter.”

With regards to the ANC’s performance in Parliament, Mantashe described the most recent debate of no confidence in President Jacob Zuma – at which over 30 ANC MPs voted alongside the opposition – as “mischievous”.

“You don’t counterpose conscience with revolutionary morality,” he said. Mantashe also promised that the ANC was going to adopt an increasingly “activist” position in Parliament, as evidenced by the current rigour of the hearings dealing with state capture at Eskom.

He refused to answer a question on which individual he had found the most problematic to work with, but said that his greatest challenge had been “people who do not engage in the organisation and take us to court”.

This complaint has been one of the running themes of the conference, with a proposal even mooted that ANC cadres who approach the courts in this way be expelled from the party. Mantashe stressed that anyone should have the right to take legal action, but not as first recourse.

“The way forward is to listen to the problems of members, address them, and resolve them,” he said. “If you do that, there will be fewer questions that end up in court.”

Mantashe defended the decision to bar journalists from talking to delegates at the Nasrec conference on the grounds that such engagement becomes a distraction, and journalists are used as pawns for various issues.

Asked if he had any advice for his successor, however – who will be either Senzo Mchunu (Team Ramaphosa) or Ace Magashule (Team Dlamini Zuma) – Mantashe said that accessibility to the media is key.

“Talk to journalists, otherwise they are going to irritate you,” the outgoing Secretary General advised. DM