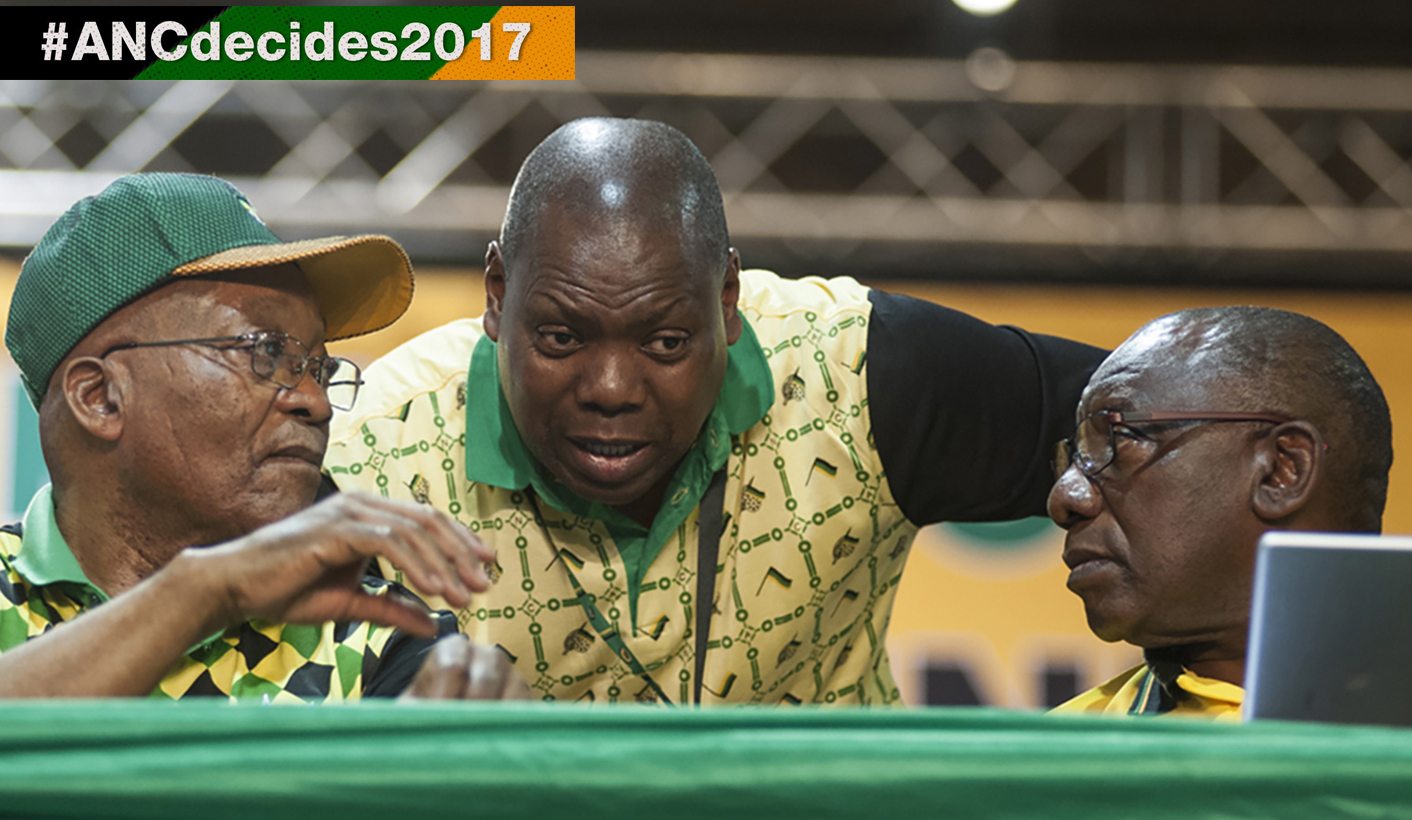 One weekend can be a long time in ANC politics, as the drawn-out start of the party’s 54th national congress at the Nasrec Expo Centre has proved. While a new president is only expected by late on Monday, the horse-trading in the two days before show that there could be an interesting twist in the tale. By CARIEN DU PLESSIS.

It was a tense Sunday night as delegates at the ANC’s elective conference started voting for the party’s next top six leadership just after midnight. An original message to the media that voting would only start in the morning fuelled a lot of distrust, as the same message wasn’t conveyed to the conference plenary discussing party treasurer-general Zweli Mkhize’s financial report at the time. The national executive committee and some of the top six officials apparently didn’t know either.

“They are doing this while there is a full plenary sitting? What is going on?” an enraged delegate told Daily Maverick just before 1am. Whether there was a misunderstanding or a message was deliberately distributed to confuse delegates into returning to their hotel rooms is still unclear. Party spokesperson Zizi Kodwa only said “voting is under way” when asked what happened.

Such was the distrust that Human Settlements Minister Lindiwe Sisulu – also deputy presidential candidate on deputy president Cyril Ramaphosa’s slate – told the BBC overnight that there were fears of rigging and talk of cameras in the voting booths checking up on the way delegates were voting.

Whether the rigging is real or imagined is hard to tell from the media pen outside a heavily-policed fence (some “rules” prohibit journalists from speaking to delegates, for a reason that has not been communicated), but what is real is that the Ramaphosa camp was a lot less confident by Sunday evening than they were on Friday going into the conference. They were boosted by the disqualification of around 100 to 150 delegates from three provinces who were expected to vote for ANC MP Nkosazana Dlamini Zuma.

“Tonight we vote. And those who believe in prayer had better pray. It’s closer than was earlier calculated,” the message came from a Ramaphosa backer.

The Dlamini Zuma camp was optimistic, but not as bolshie as always either.

It’s a very even race.

Meanwhile former presidential candidates were hedging their bets. On Saturday ANC chairperson and National Assembly Speaker Baleka Mbete threw her weight behind Ramaphosa. There is talk now that she would be caretaker president until 2019 should Ramaphosa get elected and President Jacob Zuma be forced to step down.

Then there is ANC treasurer general Zweli Mkhize, who ran for president but was nominated for deputy president, but dramatically announced his withdrawal as deputy presidential candidate at the 11th hour during nominations in plenary late on Sunday. Mpumalanga premier David Mabuza was spotted smiling broadly as Mkhize did so.

Mabuza was nominated deputy president on Dlamini Zuma’s slate, but the story from inside the Ramaphosa camp is that there were fears that Mkhize would divide Sisulu’s vote and this was painted as a victory for that camp.

Mkhize was nominated by 193 branches in the Eastern Cape. The province also nominated Ramaphosa for president.

Already several weeks ago, however, there was word that Mkhize, despite being well-loved in the party, realised that his presidential campaign wasn’t taking off. From within the Dlamini Zuma camp there was talk that he would be a number one on their nomination list as an additional member of the NEC, and then be appointed finance minister should she win.

On Sunday the delay in conference proceedings were partially ascribed to the fact that Mkhize was locked in talks with both camps.

He denied that he went with either. Late on Sunday night his spokesperson, Tahera Mather, posted a message from him on Facebook: “It is not true I joined NDZ. I would have announced. We challenged both candidates and stood on principle of unity. We needed no deal so we have no need to announce a side – ZM.”

Timeslive reported that Mkhize’s closeness to Mabuza was the key, and that the agreement for Mkhize to have the Treasury portfolio was Mabuza himself rather than the presidential candidates.

Mabuza is known as a master strategist, even a schemer. Mabuza and Mkhize have been close allies for a long time and, together with Gauteng chairperson Paul Mashatile, were key to a “unity” campaign driven by the party. (Mashatile was nominated as treasurer-general on the Ramaphosa slate, but the Dlamini Zuma slate was divided between Maite Nkoana-Mashabane and Nomvula Mokonyane for that position. Mokonyane declined nomination.)

But here is the twist.

It was Mabuza and Mkhize who, in 2012, were responsible for bringing in Ramaphosa as deputy president on Zuma’s ticket. And overnight there was talk from inside the caucuses that Mpumalanga was singing songs in favour of Zuma.

It came from David Dube, a key Ramaphosa campaigner in that province, so should be treated with some caution. After all, Ramaphosa had more than 100 branch nominations from there, but Mabuza’s role in bringing in Ramaphosa in 2012 lends some weight to this rumour.

Dube’s whatsapp message read: “No one saw this one coming! What a shocker! The whole plenary was stunned!”

This raises the possibility of cross-slate voting, where Mpumalanga’s considerable delegation – or at least the 200-plus branches that controversially nominated “unity” – would throw their weight behind Ramaphosa for president, and Mabuza for deputy. Even if, however, Dlamini Zuma gets elected with Mabuza as her deputy, Mkhize would still bag the job as finance minister.

This would be a positive for the economy, because he enjoys the confidence of the business community and is also a darling among diplomats.

Either way, one thing most delegates had in common this weekend was a relief that Zuma’s presidency of the party will soon be over.

At least two sources in the Dlamini Zuma camp said there was a strong likelihood that she would ask Zuma to step down soon after the conference as well, because they realise that he has become a liability to the party. They say there is even support for this among some of their four daughters – the same children who, in 2005, convinced their mother not to accept an appointment as former president Thabo Mbeki’s deputy after he fired Zuma.

Did the attempted delay in voting on Sunday night have anything to do with the horse-trading mentioned above, to leave time for Mpumalanga to lobby their position? It’s not clear yet. Mpumalanga was one of the provinces that voted first overnight.

By late Monday afternoon or evening, however, when the ANC’s election results are expected to be announced, some of this speculation should come to an end at last. DM

Photo: President Jacob Zuma, with Zweli Mkhize and Cyril Ramaphosa during the nominations process on Day 2 of the ANC elective conference at Nasrec . Photo Daily Maverick.