#ANCdecides2017: CR17 and NDZ – a hair’s breadth apart in a contest where anything goes 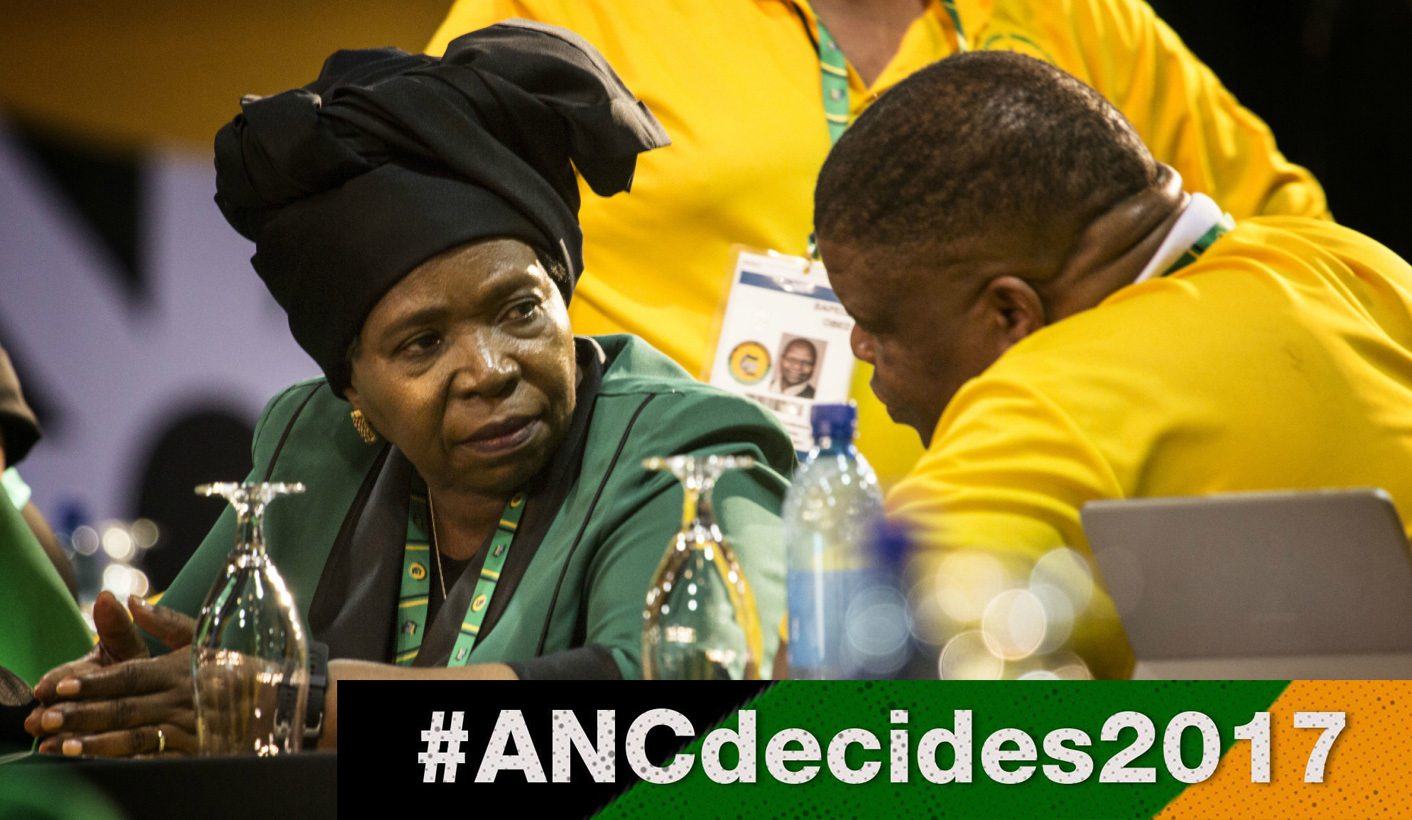 Just before the ANC leadership nominations on Sunday, “Rise, Nkosazana! The time is now!” erupted in the plenary hall of the governing party’s national elective conference. Rules of the gathering prohibit divisive songs like the one supporting ANC MP Nkosazana Dlamini Zuma’s bid for party president, T-shirts and other paraphernalia. But in the factional machinations, sticking to such rules falls by the wayside of setting the scene by any means possible in a contest that by all accounts was balancing on a knife’s edge. And no one can stop this. By MARIANNE MERTEN.

Day two of the 54th ANC national elective conference was meant to have produced a leadership result. That was according to the official programme and to outgoing Secretary-General Gwede Mantashe during a briefing on Friday, the eve of the five-day gathering.

It wasn’t to be; instead, patience was beginning to run out. There had been endless caucuses both by the Dlamini Zuma camp and that of Deputy President Cyril Ramaphosa to secure numbers in what was always going to be a squeaky tight battle for power – and in many ways for the heart and soul of the ANC.

Late on Sunday afternoon, the push for the leadership elections to finally happen was palpable. The just over 4,700 voting delegates crossed, re-crossed and double-backed over whether it was okay to take into the ballot booth a list of the 80 National Executive Committee (NEC) members.

No, said the ANC election commission established under the party’s constitution and led by veterans, including Sindiso Mfenyana, democratic South Africa’s first Secretary to Parliament, who was described as an “old man” by two pro-Dlamini Zuma delegates, who would not be listened to and who should have sat down.

But the crib sheet proposal came from the ANC Women’s League, firm Dlamini Zuma backers, supported by the ANC Youth League, also in her favour, and the fellow Dlamini Zuma supporting provinces of KwaZulu-Natal, the Free State, North West and Mpumalanga. And if nothing else, these supporters are vocal. Very vocal.

Their argument? A list in the ballot booth had nothing to do with leadership slates, or a pre-selected combination of candidates, but to “remember the 80 names” that the voting delegates were mandated by their branches to tick off on the ballot paper. Otherwise, said another delegate, “we might vote for people we see on TV, but we don’t know”.

And no one could tell conference what to do, said NEC member Tony Yengeni, who stepped into the fray:

“No rules can be imposed on conference. If conference rejects a rule, finish. There’s no electoral commission or anyone who can impose any rules.”

His comments echoed those of Zuma in his political report insisting it was wrong to let outsiders such as the courts tell the ANC what to do.

“It is not in keeping with the customs and policies of the ANC… It is gradually eroding the authority of the ANC… We can’t believe the courts are resolution to ANC problems,” said Zuma, going off-script.

But in the ANC-style democracy, of course, an ordinary branch delegate is entitled to talk back. And so did a delegate from the Eastern Cape, where Ramaphosa carried the nomination stakes, who told conference that it was the party’s constitution that was supreme.

An intervention by Gwede Mantashe to “allow the election commission to protect us from ourselves” was heckled, but ANC NEC member Naledi Pandor finally drew the line:

“We cannot carry on like this,” she said, supporting an earlier proposal to limit voting to the top six officials – president, deputy president, secretary-general, deputy secretary-general and treasurer-general – and then deal with the 80 NEC member elections later.

The proposal was carried. Given the mood and the stretched patience after months and months of campaigning and factional positioning, it’s a case of: Let’s get the top six vote out of the way and, given the outcome, everything else will fall in line according to the winning slate.

The outgoing NEC, stacked with loyalists to President Jacob Zuma at the 2012 Mangaung ANC national conference, protected the president in a series of scandals, not only Nkandla. Even when the pro-Zuma NEC numbers started to turn, it was not enough to ensure control of the party president, who snubbed even the most politely phrased requests to step down twice, 13 and nine months ago.

There is a large measure of irony in a 2017 ANC leadership contest of slate vs slate amid much talked about condemnation of slates, factionalism, infighting and behaviour described as “alien” to the culture of the governing party, like turning to the courts to resolve disputes. It’s a case of words to condemn such un-ANC behaviour, but lack of action by those who are supposed to act – the NEC or the top officials or even the conference MC, Baleka Mbete, the outgoing national chairperson, who had announced the ban on divisive displays of song, attire or anything else.

In this context it should not be a surprise that Zuma in his political report could say:

“Slate politics, another manifestation of factionalism, has also cost us many good and capable comrades in whom our movement has invested significantly. Ill-discipline has also continued to afflict the ANC, which has taken new forms in the recent past, bordering on members publicly challenging the authority of the organisation.”

In situations of tension or conflict when there was no one side to carry the day, the ANC tendency to kick for touch also emerged on Sunday. The ANC stuck with its current structure of top six officials and an 80-strong NEC with a proposal for an additional deputy secretary-general was delayed until another time. It’s a compromise, couched in terms of branches having to apply their minds further.

This falls in line with the ANC tradition of mythologising its branches as the mainstay of the organisation, both on policy and the long-standing tradition of leadership candidates proclaiming their readiness to serve at the will of members.

But the slates crystalised further after the nominations, clearly on the back of the various back room caucuses held on Sunday, and perhaps even already on Day One.

There appears to be some speculation as to whether outgoing ANC Treasurer-General Zweli Mkhize was persuaded to withdraw his acceptance of nomination for deputy president in order not to split the vote on the Ramaphosa slate for Lindiwe Sisulu or, as Business Day reported in an agreement with unity broker David “DD” Mabuza, the deputy president on Dlamini Zuma’s slate, in return for being considered the next finance minister. Announcing his withdrawal, Mkhize said: “I have engaged with a number of comrades, who would like to contribute to strengthening and building the unity of the organisation…”

With voting delayed until Monday morning, the waiting game is on. Until elections are done, little else will happen aside from the conference standards of the organisational and financial reports. With time running out on the policy front, it could well be a case of whichever slate wins setting the tone going forward.

On Sunday afternoon the pro-Dlamini Zuma supporters were allowed to publicly sing their songs – including palms raised to the heavens, and a tapping of the left wrist with fingers of the right hand to indicate time – and move from seats to send journalists scurrying from their places on the floor under the sharp watch of ANC security. But it wasn’t just this. Earlier, her supporters handed out “Radical Times – Now or Never”, a tabloid setting out her slate and radical economic transformation agenda from education to land and the fourth industrial revolution.

Ramaphosa’s camp, meanwhile, seemed to have decided to play by the rules. No factional songs, his supporters were told, no shouting and heckling. And so, in the game of songs, Ramaphosa’s supporters came second best by a long shot.

Whether this decision will backfire in the vocal factional fights, where numbers and volume are taken to indicate support, remains to be seen. The numbers by anyone’s estimation are a hair’s breadth apart in a contest where anything goes, regardless of the rules. DM