#ANCdecides2017: Meanwhile, outside the conference hall...

#ANCdecides2017: Meanwhile, outside the conference hall, the ignored and disaffected people who are told to move on 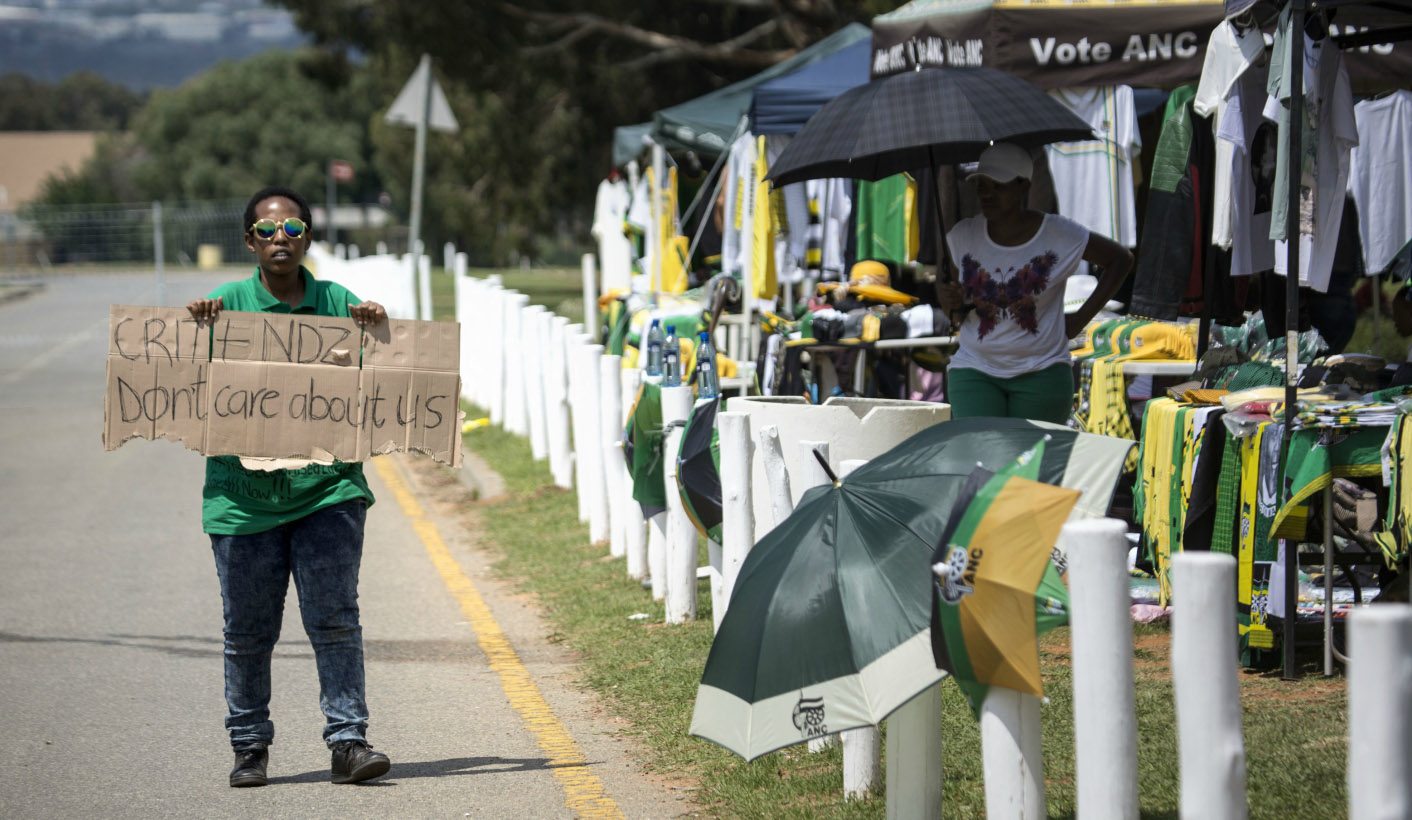 While the ANC elite hold their election contest inside the Nasrec Expo Centre, ordinary South Africans stand outside the hall, far away and behind the fence, waiting for the delegates to be their customers to buy their merchandise. By NKATEKO MABASA.

Small business does not get any smaller than an elderly black man selling cigarettes on a plastic bag laid down on the ground, in order to feed himself and his family. And yet outside the ANC 54th conference at Nasrec, this is a common occurrence.

Presidential hopefuls have been running their campaigns under impassioned themes of either Radical Economic Transformation or a New Deal, crafted, they say, to appeal to the majority poor and working class.

One street vendor sells CDs burned with music about Deputy President and ANC presidential candidate, Cyril Ramaphosa. The band Tsunami from KwaZulu-Natal have recorded 10 songs in support of CR17 and titled their album Re tsamaya le yena (loosely translated from seTswana, “We are going with him”), selling it for R50. Their hit song, which has been sung by Ramaphosa supporters throughout the conference, is titled Sizojika izinto, or “Things will change” in isiZulu.

The well-produced and catchy hits are more a reflection of the desperate attempt to make money by any means possible than a genuine support for any specific candidate.

Photo: The band Tsunami from KwaZulu-Natal have recorded 10 songs in support of CR17 and titled their album Re tsamaya le yena (loosely translated from seTswana, “We are going with him”), and is being sold by a vendor for R50. Photo: Leila Dougan

When asked about the impact of the conference in his life, Godley Satidge only tells how this will affect the sales of his merchandise. “Sales are low now and I have only made R700 since yesterday. I am waiting for them to announce the winner so people can buy the T-shirts and caps.”

It is striking to see a woman, well into old age, with torn clothes and ragged shoes, surviving by selling “skopas”. Her attire contrasts sharply with the glitz of some of the delegates who are chauffeured into the venue in the latest cars.

But these vendors are well accustomed to the rules of the game. When all is said and done, it is how much profit you have made at the conference – rather than who has won the presidency – that is important.

One activist is seen walking about outside the fence with a board raised high, on it written, “CR7+NDZ DON’T CARE ABOUT US”.

One of the street vendors, Thembeka Mavuso, and her son call out to customers as they pass by, displaying their handmade necklaces and bracelets. “I used to be a musician, and played percussion for Joyous Celebration,” says Mavuso. Now she makes whatever little money she can with her small street business.

The harassment by security reveals, more than campaign slogans and promises can ever do, how they are treated.

Sibusiso Mkonazani, who sells fruits from a box, has moved from his usual spot at the MTN taxi rank to trade at the conference. “I sell to support my mother and father and pay rent at a flat in town,” says Mkonazani. He has to keep his merchandise ready to move in case security decides to chase him away.

He has been moved twice on Sunday for selling without a permit. And a permit at the conference means paying R2,000 to be allowed to sell inside the Nasrec grounds.

He needs R1,100 every month to pay rent at a hijacked building in the Johannesburg CBD. (One can only wonder where he will go when the evictions done by the Johannesburg Mayor Herman Mashaba come to his building.)

Those selling on the streets do not believe a leadership change will impact meaningfully in their lives.

Novelist Ralph Elison’s Invisible Man best describes how poor black South Africans feel. They are invisible because people choose not to see them. To see them is to accept an obligation towards them. It is to carry a burden the political elite will rather not carry, to be inconvenienced from one’s daily life of pleasure and accumulation.

To be invisible is to be denied existence. It is to have yearnings and desires, which inevitably turn to bitterness and scorn at the discovery that, try as one might, society has no place for you.

“We are not criminals,” says Nkonazani, his face contorted after the security has moved his fruit boxes. “I paid for three seats in a taxi to get my things here, and now they treat us like this,” he says.

The poor, however, might one of these days decide they have nothing to eat but the rich themselves. And that will be a very sad day indeed for democracy. DM