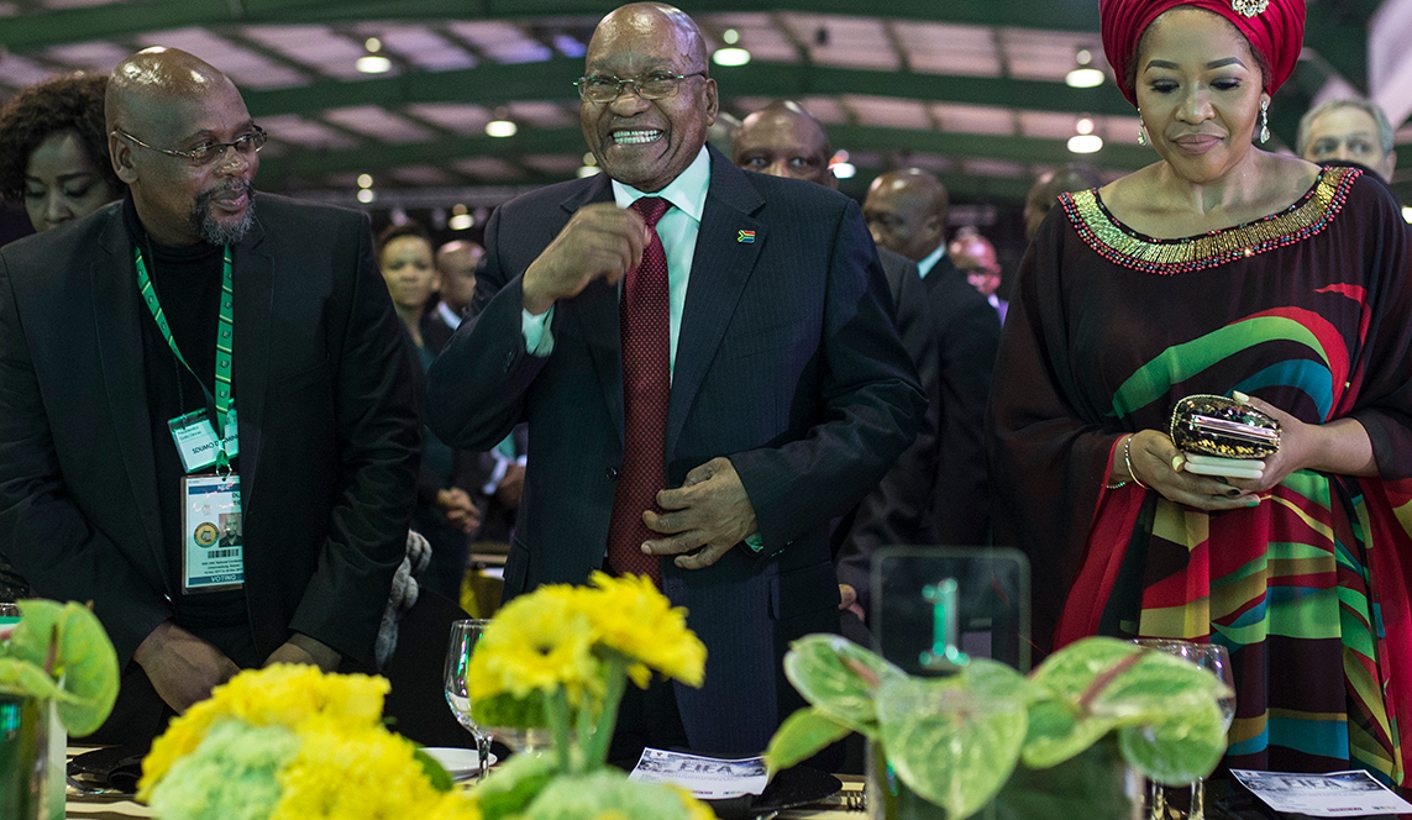 President Jacob Zuma will finally wind down his work as ANC president on Saturday, while the end to his presidency of the country is also, mercifully, in sight at last. The president was all laughs and jokes and barbs as he delivered his last address as president to an ANC gala dinner. By CARIEN DU PLESSIS.

If President Jacob Zuma sincerely meant all the warm, fuzzy things he was saying about his comrades, the party, the way South Africa needs business and his thankfulness for all the things foreign diplomats have done for the ANC, nobody truly believed him. After 10 years of lies and tricks since his election in Polokwane, his credibility is somewhat shot.

Zuma arrived with an entourage in the huge Hall 5 of the Nasrec Expo Centre at the ANC’s usual gala dinner organised by its Progressive Business Forum about two hours after the 7pm starting time on Friday night (some say he had battles to fight, but it might have just been that he was with the SABC for an interview). He found the tables packed with businesspeople, ambassadors, diplomats, ANC national executive committee members, ministers and journalists. They were already there waiting for him, and they’re not exactly his crowd of traditional unconditional admirers. They’re the kind of people who care about the economy, good governance and delivery.

The two main candidates in the race for the presidency, ANC MP Nkosazana Dlamini Zuma (last night on SABC Zuma denied supporting her), who arrived on time, and deputy president Cyril Ramaphosa, were already there and seated – Ramaphosa at a large square table equal in size to the president’s, right in front, and Dlamini Zuma on one of the same round tables as the guests, slightly behind the president’s table.

Zuma, accompanied by his wife Thobeka, had labour federation Cosatu president Sdumo Dlamini on his right hand-side, same as during one or two previous recent gala dinners.

Zuma called ANC treasurer-general Zweli Mkhize, who did the welcomes and introductions, by his familiar name, Khabazela, despite what some have said are recent suspicions from Zuma’s side that Mkhize was part of a plot to get rid of him.

Zuma also mentioned others warmly in his speech, like ANC chairperson Baleka Mbete who, instead of being allowed to stay at home to perhaps fight a last-ditch battle to get nominated as president, despite losing it in the branches, has gone to Zimbabwe to represent the ANC at the ZANU-PF conference currently underway.

Zuma mused at the idea of being an outgoing president – just like the rest of the ANC’s top six were outgoing … or perhaps coming back, Zuma said. He heard Ramaphosa was planning to, Zuma said laughingly.

The president was all jokes and giggles, perhaps as part of a last-ditch charm offensive, or perhaps he really is happy to be stepping down.

He said “the number [10] loves me”, because he was sentenced to Robben Island for 10 years, then became ANC president for 10 years, and whatever would come next, would be in chunks of 10 years.

“Fortunately the doctor promised me I will live beyond 100 years, so I can do these things without difficulty,” he joked again.

Zuma touched on some scandals without mentioning them, saying he had learnt that he got called Number One behind his back. (Remember the Waterkloof landing by the Gupta planes?) “I did not know that I get called a number when I’m not here,” Zuma said, scanning the room as if he’s looking for name-droppers.

Much of what he said wasn’t new, much like a tired uncle re-hashing his old jokes, but it still got laughs and just enough applause to appear polite. “I always joke that investing in the ANC is rewarded with blessings,” Zuma said.

He was previously lashed in the media for hinting at previous business dinners that giving money to the ANC would be rewarded with favours.

The ANC wasn’t perfect, because it actually did something, he said. “If you do nothing, you don’t commit mistakes, but if you do something you are bound to commit mistakes. It is worse when you’re like the ANC, which is in a hurry to solve the problems of this country. And therefore we might have a lot of shortcomings, but keep in mind it is all done in the good spirit to try and quicken the process of solving our problems.

“So if we do the wrong thing to you one day, forgive us, because it was all in the good spirit to try to address the problems of this country,” he said. Whether anyone believes this, much less the voters in 2019, is another matter.

Zuma also said the criticism against the ANC made the party stronger, which, perhaps, isn’t entirely untrue. South Africans love underdogs even if they are top dogs in real life.

Zuma also gushed about the democracy in the party, and its maturity for having had seven candidates run for president. “He-he!”, he exclaimed.

“Is there any organisation in our country that can have seven candidates? Not a single one. Only the ANC,” he said, adding that the party had immense talent coming up with that amount of possible leaders in the first place. (This isn’t entirely untrue – this crop of hopefuls are all well-educated and some highly qualified.)

“There are seven but only one position,” Zuma continued. “And once one of them has been elected, we will all unite behind that,” he said – and he’s ready to be led by whoever got elected.

Zuma evoked a warmer applause than upon his entrance by saying: “Comrades and friends, the night is getting old. Tomorrow I will be delivering my very last address as outgoing president of the ANC.”

Zuma said it was “wonderful” to be the outgoing president, and he was “greatly and deeply grateful” for the opportunity to serve the country.

This despite the fact that he was a reluctant president. He said “I went to Natal to try to run away from the limelight, and when I was cornered [to serve as president] I did not want to become a president, I tried to dodge.”

Then, he said he only wanted to stay one term, but was convinced to stay on longer. Details will be revealed in the book he would write in a year-and-a-half (quick math shows that this roughly co-incides with the 2019 elections – Zuma therefore is not entertaining the notion of stepping down early, it seems).

He said while some people thought he was refusing to go, he was “just carrying out the task” and “it’s been an experience and a half”.

He concluded: “I’m ready to be led”, adding that he’s a soldier, “fit and strong to be sent around” and serve the next president of the ANC.

He bears no grudges, Zuma lied.

In the turmoil and uncertainty of the next day or two, there is at least one flicker of optimism, and that is that South Africa has leaders that step down when their term is done. DM

Photo: President Jacob Zuma takes his seat at the main table flanked by one of his wives, Thobeka and Cosatu president Sdumo Dlamini. Photo: Daily Maverick