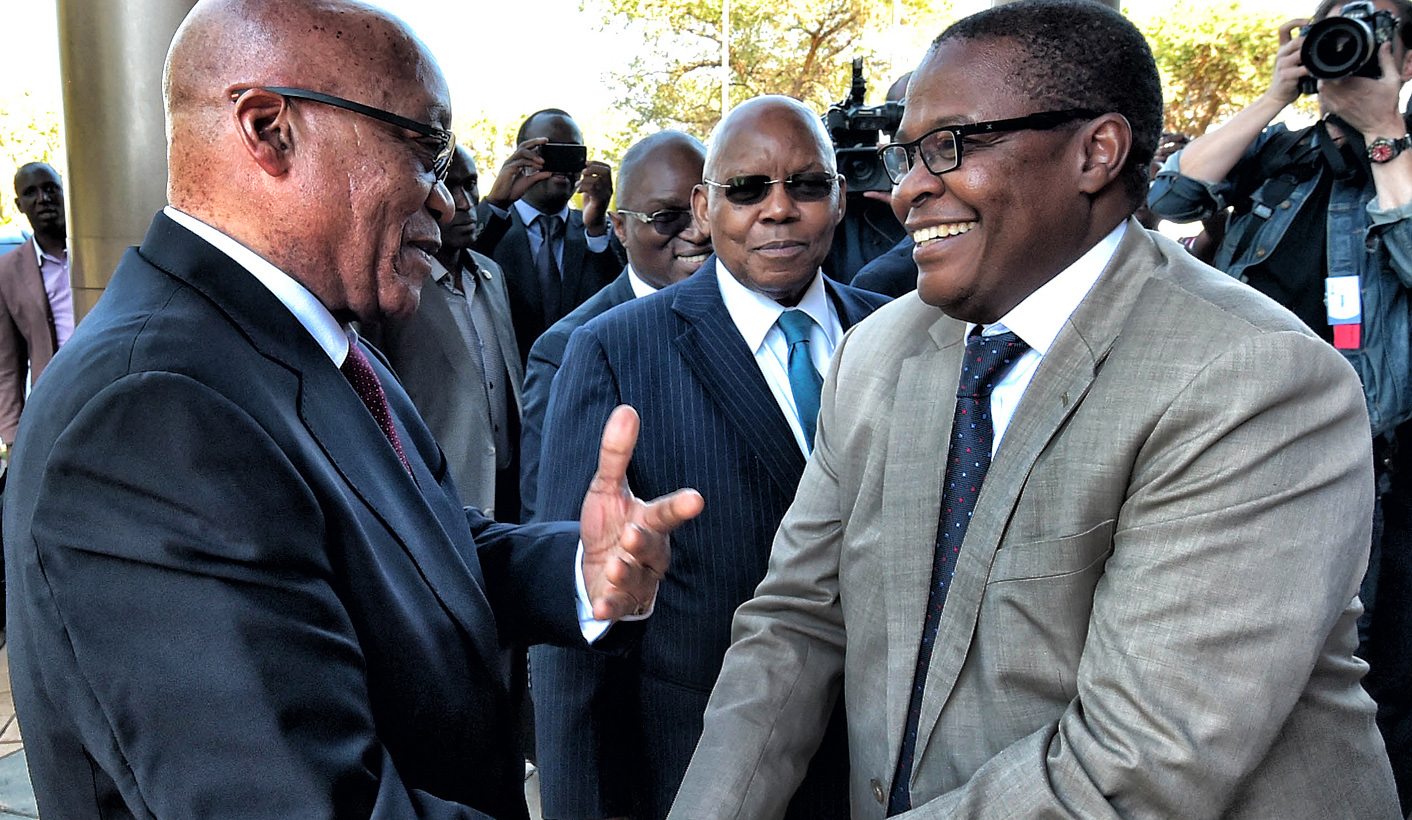 The mound of court documents on President Jacob Zuma and his legal adviser’s bedside table grew by one more on Thursday when the Helen Suzman Foundation and CEO of Sygnia, Magda Wierzycka, filed a 151-page application with thousands of attachments in the North Gauteng High Court suing No 1 and 74 others implicated in the capture of the state for billions of rand. By MARIANNE THAMM.

HSF director, Francis Antonie, deposed an affidavit at the North Gauteng High court on Thursday on behalf of the Helen Suzman Foundation and Sygnia CEO Magda Wierzycka and said that the action was necessary due to “the lack of action by those state authorities who are mandated to combat criminal activities”.

“As a consequence of these authorities’ inability and/or unwillingness to take any form of action, civil society is compelled to bring applications such as the present one to the courts,” he said.

In doing so, South African civil society was attempting to ensure that the rule of law is upheld and that what appeared to be “extensive criminal conspiracies are not allowed to continue untrammelled. The facts set forth in the affidavit are an affront to democracy and imperil the future of our constitutional order. Corruption and maladministration strike at the very heart of the State’s constitutional duties,” said Antonie.

Among the 74 respondents listed in the application for having breached the Prevention of Corrupt Activities ACT are President Jacob Zuma, Duduzane Zuma, the Gupta brothers, Brian Molefe, Mosebenzi Zwane, Lynne Browne, Malusi Gigaba, Nomvula Mokonyane, Mark Pamensky, Anoj Singh, Salim Essa, Nazeem Howa, Ronica Ragavan and almost anyone and every SoE that featured in the steaming pile of evidence found in the #GuptaLeaks.

HSF and Wierzycka want the courts to refer the matter to the Hawks and the NPA for the purposes of conducting a criminal investigation. They also want the court to order that the amounts listed in the affidavit– which run into billions of rand – be paid within 20 days of the order.

The application, said Antonie, was being brought in the public interest and to set aside various unlawful, improper and/or corrupt exercises of public power and to recover the proceeds thereof for the benefit of the South African fiscus.

“In bringing the application, the applicants exercise their constitutional rights, including the right to administrative justice and the right to ensure that exercises of powers of persons entrusted with public power comport with the rule of law, the Promotion of Administrative Justice Act 2000 (PAJA) and the principle of legality.”

South Africans, said Antonie, had an interest in the rule of law, the requirements of a properly functioning constitutional democracy, and in particular, the urgent steps necessary to root out corruption and maladministration and to recover public funds from those who allegedly benefited from misuse of public coffers.

“The emerging evidence in the public domain suggests that State-owned Enterprises (SoEs) have been and are being repurposed to serve the private accumulation interests, particularly those of a small powerful elite identified as the Gupta family and their associates.”

This mode of government, by its very nature, said Antonie, was “counter development”.

“The corrupt rent-seeking behaviour and extortion set out below have undermined South Africa’s development agenda by diverting state resources into the hands of unproductive and corrupt elites.”

State resources were vital to “the constitutional project of redressing the wrongs of the past and creating a transformed and prosperous South Africa”.

The deepening, corrosive culture of corruption within the state, and the opening of spaces for grafting a shadow state on to the existing constitutional state, had substantially impaired the South African constitutional project and, without urgent intervention, seemed destined to refocus state energies on private wealth accumulation.

“When public powers are exercised for ulterior purposes and state resources are squandered or embezzled, the citizens of South Africa are directly affected. An example is provided by the widely publicised situation at Eskom Holdings SOC Limited, which shows clear evidence of a serious lack of corporate governance and a variety of corrupt practices, together with a very weak financial condition. Eskom’s tariff increase application, which is currently being considered by the National Energy Regulator, requests an average tariff increase of 19.9 percent (but 27.5 percent to municipalities), at a time when Eskom’s sales have not increased for the past five years and Eskom has surplus generating capacity.”

Antonie said the application to the court was of particular significance given the “lack of action by those state authorities who are mandated to combat criminal activities. In relation to ostensible criminal activity in commercial dealings involving organs of state and public enterprise, the relevant state authorities are the South African Police Service (in particular the Directorate for Priority Crime Investigation) and the National Prosecuting Authority. The lack of action on the part of these state authorities is alarming, in spite of the substantial body of evidence of ostensible criminal activity which has been available publicly for some time and which forms the basis of this affidavit”.

The facts surrounding mismanagement and corruption at Eskom were of paramount public interest and constitutional significance and involved the rule of law at its most fundamental levels.

In a statement released to the media, HSF said that the leaked Gupta emails and documents had revealed clear evidence of unlawful, improper and corrupt activities by a State Capture network which included numerous government officials, many in high-ranking positions.

The unlawful and corrupt conduct to which the application relates includes:

“We are seeking, in the public interest, the recovery of all unlawfully obtained benefits which resulted from corrupt and unlawful conduct. To the extent that the information about illicit benefits is incomplete, we ask the court to order a full and proper accounting to be delivered by all relevant parties.”

The application intended to hold “all those responsible for corruption to account, in accordance with the Constitution and the rule of law”. DM