#ANCdecides2017: Court judgments put a spanner in the w...

#ANCdecides2017: Court judgments put a spanner in the works of elective conference 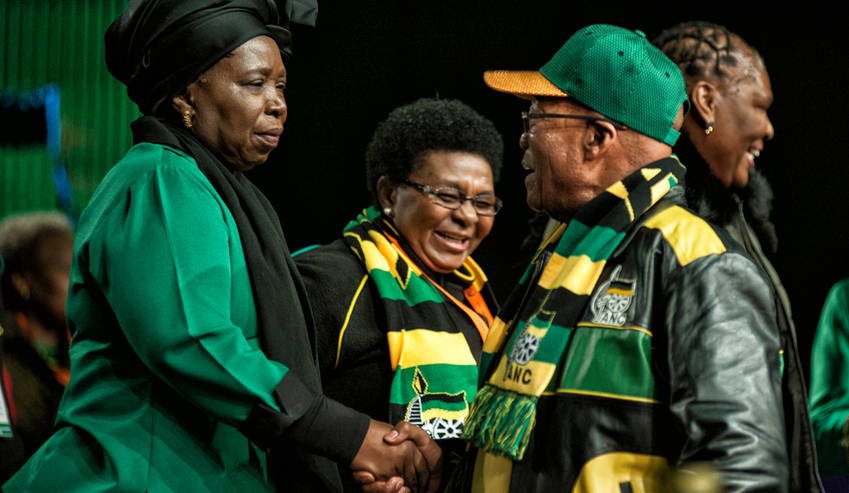 After a flurry of court judgments on Friday in North West, KwaZulu-Natal and Free State, ANC presidential hopeful Nkosazana Dlamini Zuma could have lost as many as 136 votes. But the judgments are still in dispute and the wheels of justice turn slowly. It appears only one court judgment will resist the appeals process, likely losing Dlamini Zuma 27 votes. By GREG NICOLSON.

Early on Friday, the North West High Court delivered what seemed to be a serious blow to Dlamini Zuma’s campaign to take over the ANC. The party’s biggest region in the province, Bojanala, Rustenburg, has long been in a dispute over leadership.

North West Judge President Monica Leeuw not only declared the recent regional ANC elections invalid but added, “All branch meetings inclusive of its decisions, resolutions and elections held during October-November 2017 for the purpose of electing delegates to the national conference are irregular, invalid and unconstitutional and therefore set aside.”

Those delegates from the region were seen to be Dlamini Zuma supporters who would support her in the tightly contested ANC presidential election against Deputy President Cyril Ramaphosa. The judiciary struck blows to her campaign on Friday across three provinces, but the judgments are likely to have little impact on this weekend’s voting at the ANC national conference.

Paul Mokgotle, attorney for the aggrieved ANC branches in Bojanala, said the judgment should bar 53 delegates from attending the national conference, but that doesn’t mean they won’t attend. “If the ANC appeals, the delegates can go to conference,” he said. Legally, the already-approved appeal means the delegates can attend this weekend’s event, but it may put the results under a cloud. “It’s up to [the ANC] to say whether they want to run that risk or they want to run a clean conference.”

Speaking for the North West ANC provincial executive committee (PEC), which contested the Bojanala case, Gerald Modise said that because the PEC had been granted leave to appeal the judgment, the nominated delegates from the branches in dispute would attend the national conference. He said 38 delegates from the branches would be sent to the event. “It’s a lie, a lie,” he said on Mokgotle’s claim the matter related to 53 delegates.

Modise said that because delegates from his province were going to the conference while the appeal is outstanding, the ANC might want to ring-fence their votes in case the result is contested and the North West ANC loses its court appeal.

The case in the KwaZulu-Natal High Court is simpler. Judge Sharmaine Balton on Friday upheld a previous ruling that declared the province’s 2015 ANC elections null and void. The provincial PEC plans to appeal, but the judge said the ruling stands unless that appeal is successful. Essentially that means the KZN PEC loses its allocated 27 voting seats at the national conference. They were expected to support Dlamini Zuma.

“The comrades must actually just accept they cannot lead by force. They cannot impose themselves,” said Sthembiso Mshegu, speaking on behalf of former provincial leader, Senzo Mchunu’s supporters. Mchunu lost the provincial party election to Sihle Zikalala in 2015 and his supporters led the legal battle against Zikalala’s appointment. The KZN ANC is effectively currently without leadership.

“They’re already here,” said Mshengu, in Johannesburg, on the leaders of the KZN PEC who the court stripped of their positions. He said they cannot be allowed to vote and the issue would be raised from the floor during the ANC’s 54th national conference when the issue of delegates’ credentials comes up.

The Bloemfontein High Court on Friday also ruled that the province’s recent provincial elective conference was held illegally and delegates from at least 29 branches should not attend the national conference. “If they’re already there, they must return home,” said Monnapule Ntamo, speaking for the branches who took the issue to court. He was unsure of how many delegates the branches were sending to the conference.

By ruling the Free State PEC and certain BGMs illegal, the court judgment should also mean the province’s delegation of 27 leaders should not be allowed to vote in the conference. Under Premier Ace Magashule, they have backed Dlamini Zuma. But it was unclear on Friday whether the Free State ANC would appeal the judgment, as was done in North West, which would still allow the delegation to attend the national conference.

ANC Secretary General Gwede Mantashe provided a muddy explanation of the court cases on Friday. “In as far as Bojanala is concerned, the regional conference is nullified at the court, that’s it. And regions have no voting power in the conference. We’ve given them two observers,” he said. “So it has no material impact on the conference itself. The only thing that may have an impact is the 20-something branches whose BGMs have been talked about in the judgment.”

Mantashe largely ignored the aspect of the Bojanala judgment that explicitly stated branch members should not attend the national conference. He said if branch members were barred from coming to Johannesburg, the ANC would appeal. “Because you can’t give a judgment on a conference and ban ANC members from participating in their political party.”

If the ANC does allow barred delegates to attend the conference, under the auspices of an appeal, it may open itself up to future legal challenges. DM