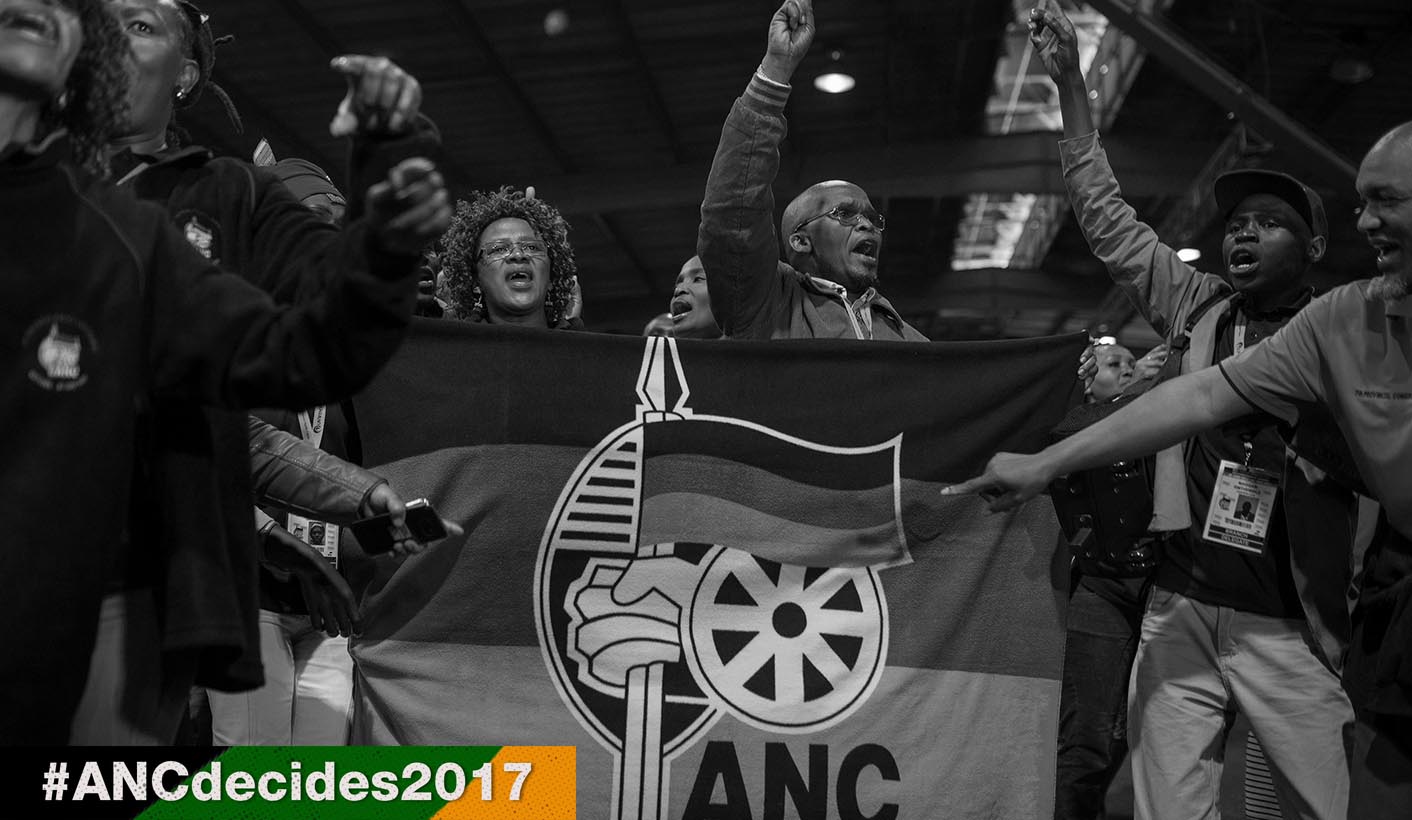 When the ANC convenes for its 54th National Elective Conference at Nasrec this weekend, the branch delegates in attendance will hold all the power to vote in the party’s new president. PUSELETSO NTHATE spoke to some of them.

I guess the branch trusts that I will best represent their interests and be able to articulate their position on a number of policy-related matters and ultimately elect the leadership mandated by them to be elected. Being elected by the branch was indeed humbling.

My branch made use of the Through The Eye of the Needle document to guide their leadership preference. We looked into the history of struggle (where one was during the difficult times of apartheid where joining and leading the ANC was equal to jail or even death). We looked at contribution to the ANC post 1994. We considered competence in the administration of government because the ANC is a governing party and will be for quite some time to come and we looked at loyalty to the party above personal interests. Having considered all these, we felt that Comrade Nkosazana Dlamini Zuma excelled in all areas. Having considered the main challenges that face our movement today – factionalism, and inability to handle state resources – we felt Comrade Nkosazana’s history was that of loyalty to the ANC above that of a faction.

As a member and leader of the Youth League, I consider the growing number of unemployed youth to be one of the biggest challenges that we face today. The economy’s inability to create jobs, particularly in the private sector, says we need to do things differently. We need to question some of the assumptions that we have held as true and which led to the policy choices we made in trying to grow the economy and create work for all. If we had prioritised pleasing investors with the hope they will once create jobs, the fact that we have such a high number of unemployed must indicate to us that we need to review this assumption and belief system.

Land ownership remains in the hands of the minority. The so-called progressive constitution has not produced any progressive outcomes for the majority of our people. Black people remain dispossessed in the land of their forefather and conference must adopt the land expropriation without compensation policy.

In order to dismantle the apartheid structure of our economy, we need to properly identify the enemy of the revolution. By this I mean we need to know who and what system we are fighting. To this end, the struggle is all about resolving three interrelated issues – racial superiority, the oppression of the working class by the owners of the means of production and the oppression of women in society. If we are to achieve this, we must identify white monopoly capital as the strategic enemy of the revolution in order to provide an answer to the aspects mentioned above. A wrong diagnosis will result in a wrong prescription.

The education of the next generation must be in line with the fourth industrial revolution. The next generation must have the requisite skills that will make allow them to contribute positively to the economy. As much as we pay attention to higher education, we need to aggressively provide opportunities for those who failed their Grade 12 to repeat with the support from the government and the private sector. Every young person must at the very least have a matric.

No at all… I’m not a superstitious person. I will carry the normal essentials from KwaZulu-Natal to Gauteng.

Why was he chosen?

The regional secretary is usually a delegate to the national conference.

Who will you vote for and why? Or what will influence the way you vote?

I will be voting for deputy president, Cyril Ramaphosa. It is tradition in the party for the deputy to be the next president. In addition, no weaknesses have been identified that would prevent us voting for him. He is also not a new kid on the block and has credibility.

Radical economic transformation. Taking a look at the resolution we have good ones but they lack implementation. There is a need to change the face of the economy to reflect the majority of South Africans.

No, I have political consciousness.

The regional secretary is usually a delegate to the national conference.

I am going to vote for Nkosazana Dlamini Zuma on the basis that she is a good leader with enough struggle credentials. She is also experienced in government work as she was a minister for 15 years. She is also an international leader, an intellectual, and incorruptible. She is a woman of integrity and she is the woman with substance which you can feel when she unpacks her take on Radical Socio-Economic transformation which is also something that I believe in.

Nkosazana Dlamini Zuma is the only charm needed.

Attendance at the national conference is automatic for a regional secretary in the ANC.

We are going with Cyril Ramaphosa. He is a deputy president and is prepared to take over. It has been the party’s tradition that the deputy takes over.

All policies in the commission are important. All these policies are what guides us. To have a strong government you need strong policies in place.

I don’t have any lucky charms but I hope the ANC will come out united.

We are 100 percent behind Nkosazana Dlamini Zuma. I think we can say we are ready for a woman to lead us. Dlamini Zuma is capable of leading the party and people should judge her based on her work since she joined politics. This thing of saying it is the party’s tradition for the deputy president to take over is a myth.

Radical economic transformation is important. It’s about time our people to get their fair share of the economy of the country and we are sure NDZ will implement this policy.

No lucky charm is needed, we are confident that NDZ is the right person.

As regional secretary, I am automatically part of the province’s delegation to the conference.

Who you voting for and why?

I will be voting for Nkosazana Dlamini Zuma because she has raised relevant issues that the youth can relate to. These include skills development and political transformation.

I don’t have any lucky charm.

I am not sure why I was chosen, maybe I am trustworthy.

Who are you voting for and why?

I will surely vote for Cyril Ramaphosa because I believe Ramaphosa is the change we need as a country. It also follows party tradition for the deputy president to take over the reigns and this is the mandate of my province.

A proposal, the one million, one vote policy, was raised by the provincial chairperson, Oscar Mabuyane. This is where each branch member has a vote to directly for vote for a president because the choice of leadership should not be held in the hands of a select few.

Do you have a lucky charm you can’t do without at conferences?

No lucky charm just prayer. I am hoping for the best and a good conference that will make a South Africa a better country.

As regional secretary my attendance at the conference is automatic.

I will be voting for Cyril Ramaphosa. The ANC has set a historic culture that the deputy president succeeds the outgoing president. Also Ramaphosa has the capabilities of growing the country’s economy and I believe the masses want him to take over.

I will be participating in land and economic transformation in the commissions. Youth participation in the economy and the land issue is very important.

I have no lucky charm.

Mpumalanga Branch Chairperson of the ANC in Ward 22 Emalahleni Sub Region, Nkangala Region, aged 34, did not want his name used saying he would be disqualified.

My branch has trust and confidence in me that I will not sell the mandate of the branch. No amount of brown envelopes will make me sell my soul.

Who will you vote for and why? Or what will influence the way you vote?

I will be voting for Cyril Ramaphosa. The reason being is that the ANC has tradition and as Ramaphosa is the deputy president, he is, according to tradition, eligible to be the successor. The ANC is not a family affair. We can’t have another Zuma as a president. Besides people no longer want to associate themselves with this surname.

Land compensation without expropriation is the most important. We must take our land back, we’ve been romanticising this for a long time now.

The formation of a state bank is close to our heart. We want a bank that will be able to lend money to the people with flexible interest rates and a bank that can be sympathetic.

No lucky charm is needed, this is the strategic moment. This where the ANC cleans itself. We can’t afford to make mistakes that will cost us in 2019. DM