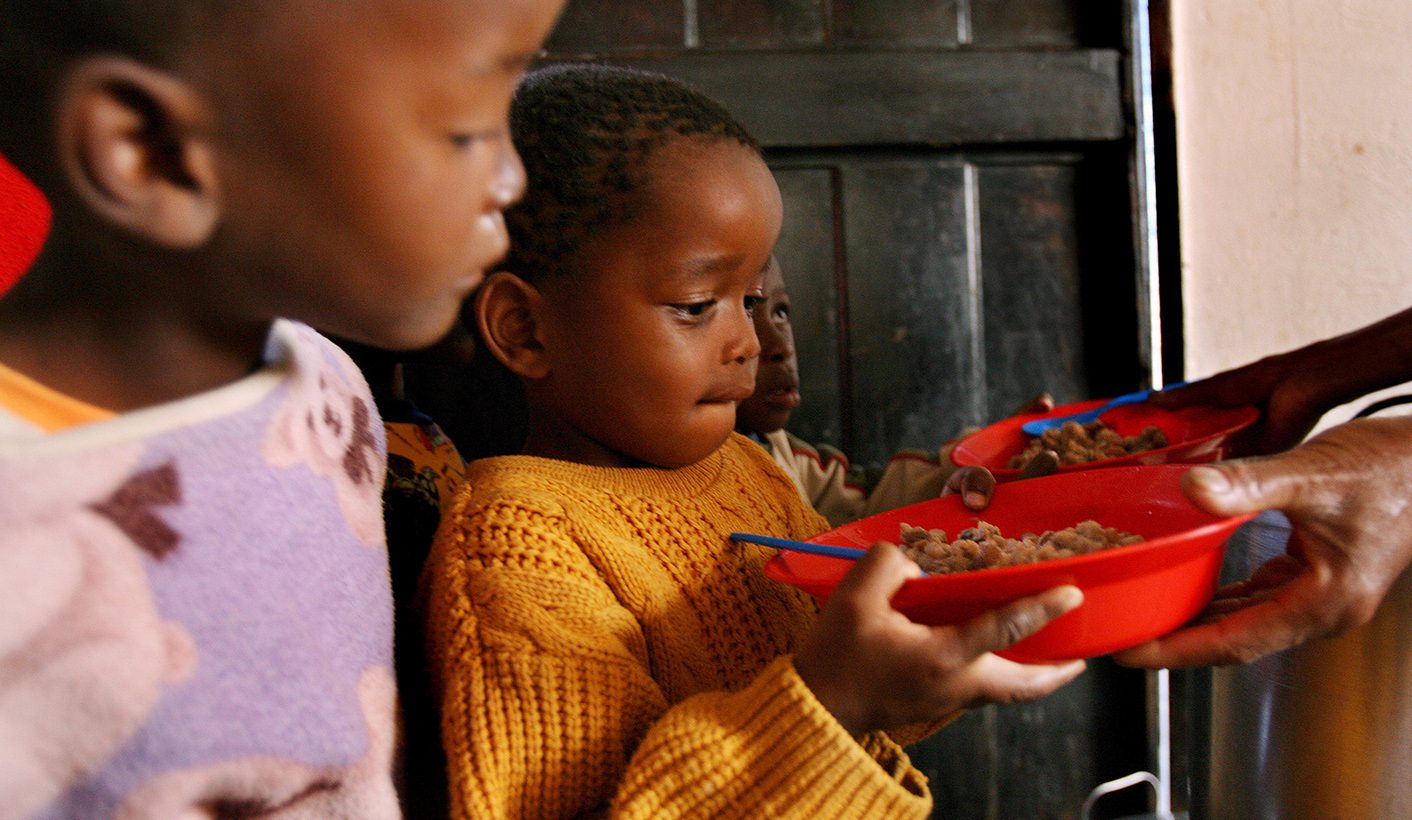 By the middle of this century, the world’s farmers will have another 2.4-billion mouths to feed, half of which will be in Africa. But if we only focus on producing more calories of food per hectare, and throttling back population growth in order to fill the gap, we won’t address the more complex reasons why our modern food system leaves us hungry, heavy, and sick, argues science writer LEONIE JOUBERT.

It was telling that the apex dignitary invited to last week’s Global Food Security Conference in Cape Town was the Minister of Agriculture. Even though the “wicked” problem of food insecurity was framed in its usual three ways – a devil’s weave of hunger, micro-nutrient deficiency, and overweight/obesity – there still wasn’t any sign that the Ministers of Health or Social Development should be leading the charge to fix a food system that appears awash with calories, but nevertheless leaves so many hungry and heavy.

The four-day programme was packed with scientific papers on how to boost Africa’s farming outputs, in the hope that the continent can become the new bread basket of the world.

Given the continent’s growing population, and people’s rush to live in cities, two-thirds of Africans will be urban by 2050. Crudely, that means that for every one farming family out there in the hinterland tending to their cows and carrots, two city-dwelling families are dependent on their produce to eat, said visiting Cornell University professor, Alice Pell. So if Africa plans to feed itself, its farmers are going to have to up their game, speaker after speaker said, using good science, modern technology, and a conjuring trick that will make farming appear sexy for the younger generation who want office jobs over onion yields.

But the population growth argument is a red herring, argues Prof Julian May, director of the Centre of Excellence in Food Security at the University of the Western Cape. “Fertility rates in Africa were high 20 years ago. Since then, fewer children are dying and people are living longer. This means that there are a large number of people of reproductive age at the moment,” says May. Even though there will be population increase in the coming decades due to this demographic momentum, in many parts of the continent the fertility rate is dropping to replacement levels, where two parents are having two children. While Africa’s population is expected to double from 1.2-billion now to 2.4-billion by 2050, according to the United Nations Population Division, it will then plateau off. The issue is how to harness the energy of Africa’s youth as a dividend for economic growth, rather than as a poverty trap, says May.

The continent’s farmers are already coaxing an adequate sufficiency of calories from Africa’s soils.

The question of why those calories aren’t equally distributed, or what happens to them once they leave the farm gate, did not get equal airtime at the conference, which failed to capture how much the food system has changed in recent decades, and the resulting explosion of poor health outcomes.

“In the 1960s, we thought that if we just produced enough food, the hunger problem would go away,” argues Prof Alice Pell from Cornell, “but so much has changed since then, in terms of how food is processed, marketed, and distributed, and what people eat. We need to look at the impact that processing has on the nutrient value of food, which is tremendous.”

The industrial food system puts healthful foods through a process that largely strips them of their nutrients, leaving behind cheap and accessible, but often “dead” calories. These foods have long shelf lives, travel well, and can withstand rough handling to reach spaza shops in even the most remote places. They’re a low-risk product for small businesses to buy, compared with perishables like spinach or apples. But while they may bring plenty of energy, they often don’t contain much goodness. Without turning attention to this aspect of the food value chain, food security thinkers and policy-makers won’t address hunger, micronutrient deficiency, or rising obesity rates on the continent.

A 2014 Oxfam report on the state of food security in South Africa, Hidden Hunger, summarised the situation like this: poorer South Africans are dependent on a diet of cheap, sugary, starchy foods, with most people having “good access to bad food, and bad access to good food”.

Large multinational food companies are also capitalising on the strength of their presence in South Africa to springboard this industrialised, profit-driven, neoliberal “Western” diet into the subcontinent.

Pell was one of the few at the conference to flag the society-wide switch to highly processed, sugary foods and beverages as being at the heart of the triple burden of disease: consumption of sugary drinks, which is one of the direct drivers of obesity, and diabetes, which is up by 69% in South Africa since 1994, while vegetable consumption is down by 8%.

The hunger-obesity paradox: ‘Obesity is a disease of poverty’

In South Africa, one in four children under the age of three is stunted, meaning they are too short relative to their age group’s average height, a sign that they are chronically micronutrient deprived. Stunted children are likely to earn about 25% less than their well-nourished peers once they reach adulthood, according to The Lancet’s 2016 special report on early childhood development. Stunted children are also more prone to chronic diseases like diabetes, heart disease and obesity in adulthood.

At the same time, 40% of South African women are obese. The fact that stunted children often occur in the same household as an overweight or obese mother speaks to the hunger-obesity paradox, the result of an industrial food system where many communities are awash with cheap calories, but not necessarily with good nutrition.

“By 2022, there will be more obese people than undernourished people globally. There has been a fourfold increase in diabetes since 1980, and it’s occurring in low and middle income countries.

“This is a developing world issue. Obesity is a disease of poverty, because of some of the changes in the food system, particularly in terms of processing of foods,” says Pell.

Ironically, while the role of processed foods and sugar in driving the explosion of non-communicable diseases in poorer communities was barely visible at the conference, in the same week, the South African Parliament breathed life into the sugary drinks tax. A similar tax has decreased sugary drink consumption in Mexico by 7.6% in the first two years, after its introduction in 2014, according to The Lancet. And while a fiscal tool like this is by no means a silver bullet (the revenue it earns must be ring-fenced to treat the diseases resulting from long-term exposure to sugar, or go directly towards countering the marketing messages from companies selling sugary drinks), it can be one small-calibre contribution in a carefully loaded arsenal of approaches to cutting sugar from industrial foods.

Coincidentally, while all this was happening in South Africa, a new World Health Organisation (WHO) report was presented in Geneva in the same week, recommending a global push to tackle the pervasiveness of processed foods, through placing restrictions on marketing of fast foods to children, more consumer-friendly labelling, using pricing policies like a sugary drinks tax, school food standards that steer away from unhealthy foods, and “ambitious strategies to reformulate the composition of food”. All these measures call for policies which push back against the dominance of multinational food corporations which have had a few decades to capitalise on a free market system to accumulate huge profits and shape the food system in their favour. This kind of thinking shifts the focus away from public health interventions which until now have relied on education and behaviour change messages which focus on individuals’ response to the food system, rather than looking at the nature of a system that makes it hard for people to make the right food and lifestyle choices, and easy to make the wrong ones.

The WHO is finally recognising the need to change the unhealthy food environment, rather than focusing on instructing individuals on how to behave within that environment. Looking at the speaker line-up of the Global Food Security Conference, it’s clear that this message still needs to trickle down to some levels of academia. DM

Leonie Joubert is a freelance science writer, and author of The Hungry Season: Feeding Southern African Cities, among others.

Photo: A file photograph dated 23 May 2006 shows a child receiving a plate of food at a feeding scheme in Soweto, South Africa. EPA/JON HRUSA