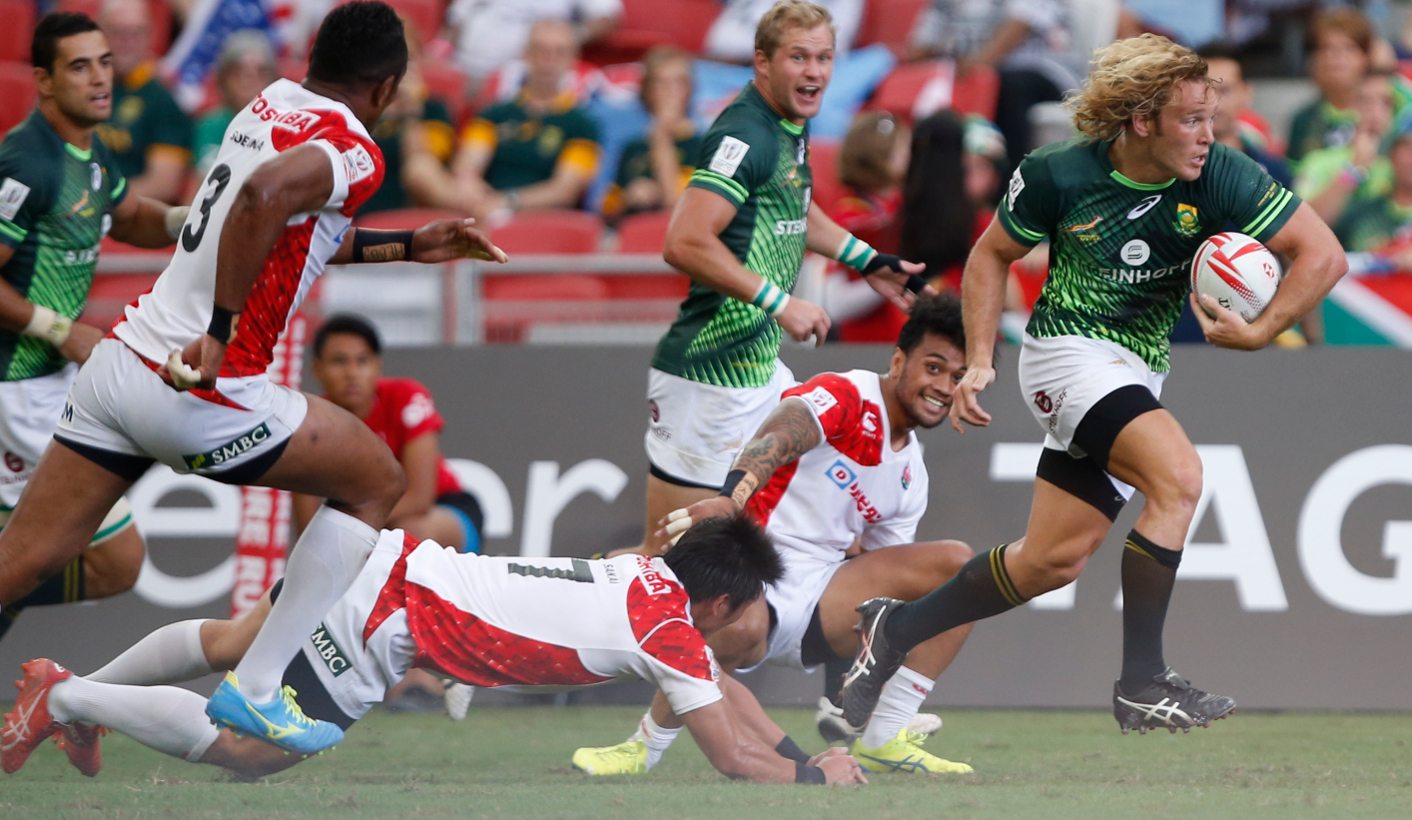 The South African Sevens team got their title-defence off to the perfect start, beating New Zealand 24-12 in the Dubai Sevens final over the weekend. It’s a long slog to the final – with the Commonwealth Games scattered in between – but this team is already building on their legacy. By ANTOINETTE MULLER.

While the Springboks were rough and tumbling their way through another miserable outing against Wales on Saturday, the Blitzboks were delivering lessons in composure. South Africa’s Sevens team began their World Series title defence in the perfect way – by winning the Dubai leg of the tour for a second year in a row.

Despite a rusty start in their first outing on Friday, the Blitzboks bounced back and played like the champions they are. They powered their way through the pool stages and the knock-outs with their experience and held their nerve to beat New Zealand 24-12 in the final.

It’s a strong statement in what is going to be an incredible year of Sevens rugby – but they have another opportunity to build on their legacy when the Sevens rolls into Cape Town this weekend.

The team is unchanged for this weekend’s rendezvous – so expect more mesmerising combinations from the darlings of South African rugby.

They are drawn in Pool A – alongside Kenya, France and Russia. You can have a little sleep in, too, because their first game is not until 12:49 (Russia), followed by the second at 16:10 (France) and finally against Kenya at 19:56.

Here are Seven talking points ahead of the weekend’s action.

During the previous season, South Africa had blips of frustration with discipline. Rosko Specman landed himself in the sin bin during the second half of the final on Saturday, just giving New Zealand a sniff. Last season, South Africa racked up 13 yellow cards – the eighth most of any team. That didn’t have much of an impact on the end result either, but considering their strive for perfection, it’s something to keep an eye on.

You could probably write this same sentence about any South African player. But special mention goes to Werner Kok this week. His physicality, always getting involved and always ready to pounce is something to behold. Kok is like a Jack Russell who has just torn up a fluffy pillow – the pillow is his and all the pieces are his.

Kenya finished a respectable seventh in Dubai. But the team could be so much better were it not for the continued maladministration that besieges them. Constantly marred by player strikes, failure from the union to negotiate proper contracts and a host of other issues constantly leaves you wondering if the side could return to their heyday if only they were managed properly.

Uganda, meanwhile, look like a team to watch. Solomon Okia tied for the most points and tries scored by any player over the weekend’s action. And while the team managed just two points in the overall table from the weekend’s action, the growth of the sport in the East African country has been tremendous. They have already qualified for the Sevens World Cup next year and while resources and finances remain a struggle, the country is a shining example of what happens when a governing body seeks to grow a sport through inclusion.

New Zealand had a horror of a season in 2016-17. They qualified for their first cup final for two years this weekend and while one final doesn’t make a season, the All Blacks look like they could be a challenger this season again.

The Blizboks’ impact from the bench

Critical for the South African Sevens team is going to be the impact from the bench this season. They will once again lose some of their stalwarts to the XV-man game after just a couple of rounds, but so far, they have showed that there is plenty of strength in depth. Every time a substitute came on this weekend, there was an immediate impact.

The Blitzboks will help you forget all your problems

While South African rugby largely seems to be stagnating, struggling for an identity, the Sevens side continues to be a shining example of inclusivity and proper player management. Since it’s a relatively “new” sport, Sevens also has the advantage of not being bogged down by “traditional” systems which hold the bulkier version of the game hostage. But it is beyond belief that two national teams who fall under the management of the same governing body do not borrow intellectual property from one another. Still, if you’re looking for some light relief from all that is wrong in the world, look no further than the Blitzboks. DM

Photo: Werner Kok of South Africa (R) drives past to score a try against Japan during the HSBC 7s World Rugby Series held at the National Stadium in Singapore, 15 April 2017. Photo: EPA/WALLACE WOON