Right of Reply: Zapiro’s depiction of Moyane amounts to trial by media 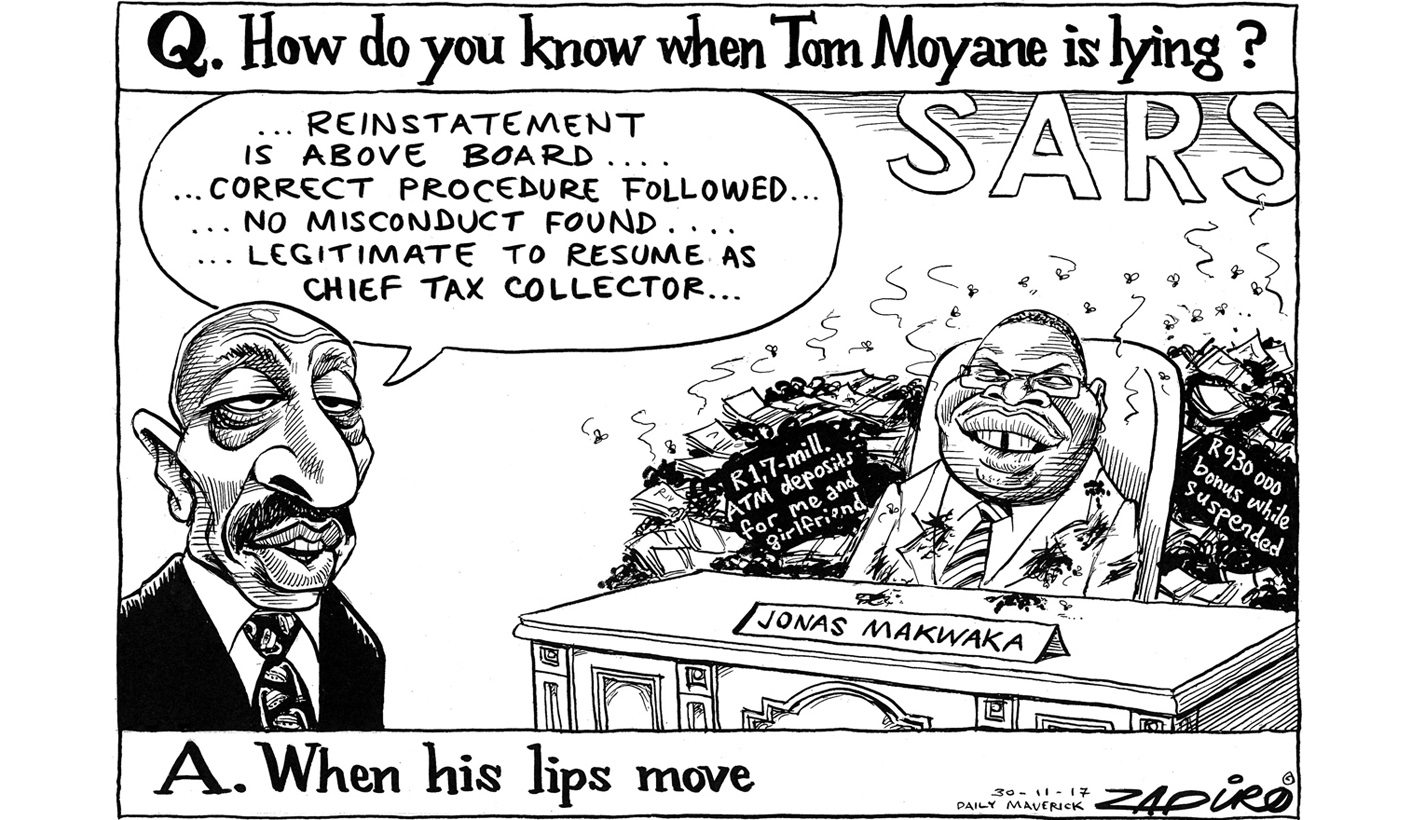 Cartoonist Zapiro’s depiction of SARS Commissioner Tom Moyane (30 November 2017) borders on racism and the perpetuation of prejudice and stereotypes. By Sandile Memela of the SA REVENUE SERVICE.

The media, including Zapiro, has been viciously pursuing Mr Tom Moyane and Mr Jonas Makwakwa, Chief Officer for Business and Individual Taxes, despite any criminal proceedings being finalised.

In fact, the cartoonist’s intention is to conduct such criminal proceedings through the media – a trial by media in which the cartoonist can charge and convict Mr Moyane and Mr Makwakwa irrespective of the facts at hand.

Let me be clear, Mr Moyane has repeatedly stated that he would be the first to act if the criminal justice system finds any wrongdoing on the part of Mr Makwakwa. It is a statement based on the time-honoured notion that a person is presumed innocent until proven otherwise in a court of law.

But such a reasonable and rational statement will never be good enough if you have already decided on a guilty verdict.

Predictably, Zapiro portrayed Mr Moyane as an outright liar after the latter lawfully allowed Mr Makwakwa to resume his duties at SARS because he has not been found guilty of wrongdoing in a court of law.

In fact, a senior counsel of the Johannesburg Bar, Advocate Terry Motau SC conducted an independent investigation to determine if Mr Makwakwa had done anything untoward as a SARS employee.

Makwakwa accounted for the alleged “suspicious transaction” flagged by the Financial Intelligence Centre and was exonerated as these transactions had nothing to do with his position at SARS.

After months of investigating, even the South African Police Service (SAPS) and the Hawks have not yet finalised any formal charges that could be pursued by the National Prosecuting Authority (NPA) in a court of law.

That is where we are on this matter. Those are the facts. One can only conclude that Zapiro relies on superficial, incomplete and biased media reports for his inspiration. If that is his muse then perhaps he should advertise for another one.

The fundamental problem is that Zapiro’s depiction of these two black men – for that is what they are in an inherently racist society – is based on ancient, decrepit, and for the most part, predictable and monotonous stereotypes.

But Zapiro is regarded as innocent, free and independent – beyond reproach. He is presumed to be beyond prejudice and thus objective in his art. Huh? Really?

There is nothing objective, let alone creative, in merely repeating the worn-out false narrative that casts doubt on Mr Moyane’s integrity because of his alleged close links to President Jacob Zuma.

Moyane is on record that he is neither a lackey of Mr Zuma nor the Guptas. He has insisted that he is “his own man”.

What Zapiro has done is nothing but a character assassination of the leader of one of the most crucial state institutions in our country.

But let me explain why I think Zapiro is prejudiced, perpetuates stereotypes and is guilty of the deliberate misrepresentation of facts.

The cartoon, its blurb and headlines are, predictably, a deliberate attempt to portray Mr Moyane, personally and in his capacity as SARS Commissioner, as being involved in improper and unlawful conduct.

The depiction does not reflect the factual, accurate and correct status of developments regarding the Makwakwa matter. This is what makes it untruthful, unfair and entirely objectionable. It is nothing but bias, exaggeration and innuendo.

One must wonder whether Zapiro has enough capacity for critical thinking or research. It seems that all he does is to ride on the back of sensational headlines at the expense of the integrity, credibility and reputation of his targets. In his case creative licence will always override the facts.

This response to Zapiro is not primarily about race. It is about the facts. And the other fact we must not forget is that Mr Moyane and Mr Makwakwa are black persons who are at the helm of SARS. This is a historic achievement. The economic and financial sectors have for centuries marginalised blacks.

SARS is not a seed bed of corruption, ineptitude and failure because Mr Moyane is at the helm.

In fact, (it) continues to attract some of the best skilled and talented individuals in the country. During Tax Season 2017 which ended on 24 November for non-provisional taxpayers, SARS received 5.6-million tax returns. SARS paid out over R18.5-billion in refunds to 2.2-million taxpayers, an increase of 26% over last year.

In total, R19.8-billion in refunds has been paid to individuals for this financial year to date, inclusive of prior year returns, directly contributing to household incomes and the domestic economy.

SARS is proud of its achievements and no campaign of denigration will succeed in diverting us from our mandate of collecting the revenue that is needed to ensure that our country deals with the urgent development challenges we face.

Creative licence is sacred, but so are the facts. DM