Op-Ed: Dealing with Libya’s slave trade could be at the risk of the area’s ‘stability’ 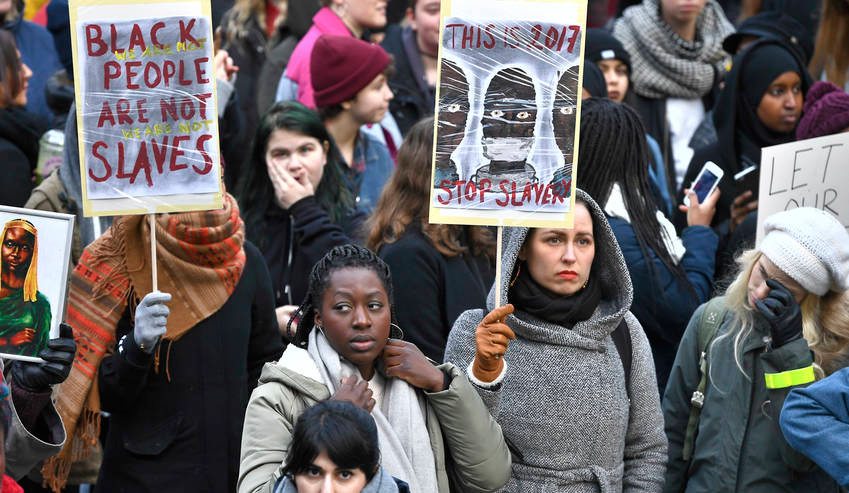 In what has become a characterising feature of Libya’s zero-sum political landscape, it appears that a bid to curtail the deplorable practice of slavery could come at the expense of security and stability. By MENZI NDHLOVU.

A recently published CNN documentary on Libya’s African migrant slave trade has sparked collective outrage over the phenomenon. Set in an undisclosed location in Tripoli, the documentary shows migrants that had been captured by militants off the coast of Tripoli, or the desert outskirts of the Fezzan region, being auctioned off in a clandestine market. Beyond the capital, similar trades were reportedly rife in the towns of Sabratha, Ghadames, Sebha, Gharyan, Zintan, Rajban, Kabaw and Garabulli.

The phenomenon is by no means new to the embattled country. Slavery, smuggling and human trafficking comprise a key component of Libya’s post-Gaddafi parallel economy. However, amid the prolonged instability, the slave trade has boomed, with dissolution of the formal economy and the profitability of the informal market making illicit activities a lucrative alternative. Furthermore, the lure of militancy and flight among Libya’s working age population has left the country bereft of a labour force, establishing demand for cheap labour, whose supply has been contentiously met by the influx of Sub-Saharan migrants. Rather tellingly, a report by the UN’s International Organisation for Migration (UNIOM) has cited the European Union’s EUNAVFOR-Operation Sophia as a crucial driver of the slave trade, in its outsourcing of anti-smuggling operations to a poorly vetted coastguard and militant outfits.

In response, several governments, intergovernmental bodies and humanitarian organisations have called for swift and decisive intervention which could have unintended political and security ramifications for the tenuous Libyan state. For one, international pressure has seen the launch of a joint commission of inquiry by the United Nations (UN) and Libya’s own Government of National Accord (GNA). In addition, propositions for retributive measures against the Tripoli-based GNA have come from several quarters. France, in particular, has requested an urgent Security Council meeting to discuss potential targeted sanctions on implicated non-state armed groups such as Libya Dawn, Brigade 48 and the Zintani Military Council. The P5 member has further proposed direct financial and diplomatic sanctions on the Libyan state if its justice system fails to reign in the culprits and the practice at large.

It is unclear if the UNSC will proceed with the sanctions, but of themselves the proposed penal measures could further unsettle the delicate power balance in Libya and exacerbate its instability and volatile security dynamic. As noted, the armed groups cited are predominantly (but not exclusively) western Libyan, GNA-aligned entities. Bereft of a formal conscripted army, such entities have served as the de-facto security apparatus for the UN-backed government. Historically, groups such as Libya Dawn and its Misratan and Zintani counterparts have played a crucial role in consolidating GNA-territory and protecting its diminishing oil and maritime interests in the wider Tripolitania region. Equally, the militias were central to dislodging the Islamic State in Libya (ISIL) from its enclaves in western-Benghazi, while cubing its metastasis to the capital. Recently, these groups have served as a counterbalance to the HoR aligned Libyan National Army (LNA) and, their prowess may be deterring the LNA’s promised offensive on Tripoli. Accordingly, any move to directly sanction and thereby weaken these entities in the name of humanitarianism risks undermining the GNA’s expedient, yet seemingly effective, security arrangement. Without this, the UN-backed government’s territory, wealth, security and sovereignty risk being further undermined by the LNA and increasingly resurgent Islamist extremist groups, including ISIL. Equally, any indirect sanctions through reduced funding for the GNA, and in turn its aligned militant groups, could amount to a similar acrimonious end for the Tripoli-based authority.

Moreover, International pressure on the GNA to prosecute the implicated militias is underlined by a fateful misconception, inherent in its presupposition of the GNA’s authority over these groups. As previously alluded to, allegiances between the Tripoli-based institutions and western militias are nominal and predicated on convenience. Where such tenuous binds no longer proved profitable, militant groups have swiftly shirked to the LNA or conducted acts of recalcitrance, such as strategic blockades of oil installations as witnessed in the Sharara oil fields in October. Accordingly, any legal measures could prompt similar retaliatory acts from GNA-aligned outfits, while seeding animosity between the groups enforcing and subjected to the law. In what has become a characterising feature of Libya’s zero-sum political landscape, it thus appears that a bid to curtail the deplorable practice of slavery could come at the expense of security and stability. DM

Photo: Protesters attend a demonstration against alleged slavery in Libya, at Sergelstorg in Stockholm, Sweden, 25 November 2017. CNN’s footage of young Africans being auctioned off near Tripoli, filmed on a hidden camera and aired on November 14, has prompted protests in various parts of the world. EPA-EFE/CLAUDIO BRESCIANI.