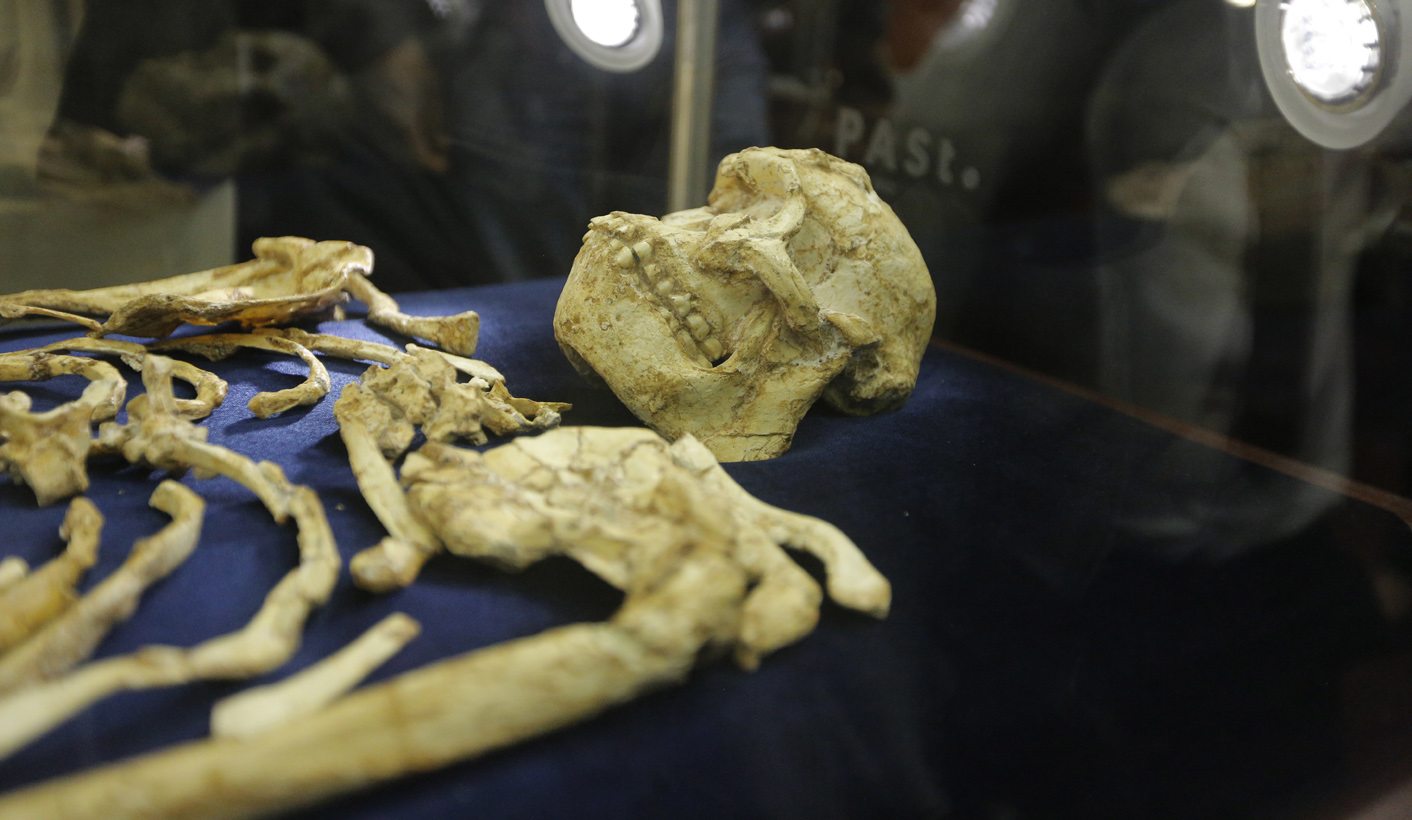 The world’s oldest complete skeleton of one of our ancestral relatives was unveiled in Johannesburg on Wednesday, after palaeontologists had spent two decades painstakingly excavating and cleaning each bone from a Sterkfontein cave. Her name is Little Foot, and scholars say that in terms of age and completeness, there is nothing quite like her. By MARELISE VAN DER MERWE.

South Africa is a veritable treasure trove of fossils. It has fossils as important as those that put East Africa on the map, and some as old as the oldest from Tanzania and Ethiopia.

So said Professor Ron Clarke of the Evolutionary Studies Institute at the University of the Witwatersrand in Johannesburg, speaking to Daily Maverick following the unveiling of the nearly complete “Little Foot” skeleton in Johannesburg on Wednesday.

“This does not mean we are in a competition. Every hominid fossil found is potentially important for telling us more about our ancestry, even if it is just a tooth,” he said. “But in terms of age and completeness, there is nothing else like [Little Foot].”

The skeleton also sheds light on the diversity of species alive at the time, he added. “What this fossil also tells us is that there were different species living at the same time, not just in different parts of Africa, but within South Africa.”

Whether this means more discoveries will follow is anybody’s guess. But for Clarke, at any rate, Little Foot has yielded decades’ worth of research.

Little Foot, so-called by the late palaeontology Professor Philip Tobias as a nod to the mythical Big Foot, and because of the small foot bones initially spotted by Clarke, is the only known virtually complete Australopithecus fossil discovered to date (to be precise, Little Foot’s full species name is actually Australopithecus Promethius). It is also the oldest fossil hominid in southern Africa, dating back 3.67-million years.

A previous well-known discovery of a near-complete skeleton, known as Turkana Boy, was discovered by Kamoya Kimeu in 1984. The skeleton, estimated to be a child of around five feet tall, is less than two million years old.

Little Foot, a young female, probably fell to her death in a cave. Somewhere between human and ape, her skeleton revealed, too, that her kind probably walked upright rather than all fours.

Her skeleton’s unveiling has been a long time coming. It lay deep within the Sterkfontein caves, about 40km north-west of Johannesburg, until Clarke found several foot bones and lower leg bone fragments in 1994 and 1997, among other fossils that had been removed from rock blasted from the cave years earlier by lime miners. Clarke told Daily Maverick the research alternated between excitement and disappointment.

“We are not people given to jumping up and down with excitement – we are internally happy and excited if we find something like this, but we get on with our work,” he said. “But the disappointment – that was something else. We began excavating when we made contact with the tibia, thinking we would find the rest of the skeleton laid out there. We had both the left and right legs, [so] we exposed them, right up to the middle of the thighs – femurs – we kept working up slope, slowly, slowly, cleaning away at the rock, and didn’t find any more.

“I said, ‘This is impossible. How can we have two lower legs, both sides, and not the rest of it?’ We were frustrated and disappointed.” Clarke realised there must have been an ancient collapse, and that the upper part of the skeleton must have fallen to a lower level and been sealed in with thick flow stone. The hunch proved to be correct. The team dug through the flow stone until [Clarke’s assistant] Stephen Motsumi’s chisel made contact with more bone – Little Foot’s skull.

“That,” said Clarke, “was an exciting moment as well.”

The team says the discovery of Little Foot is likely to add greatly to the knowledge of the appearance, full skeletal anatomy, limb lengths and locomotor abilities of this species of our early ancestral relatives. Clarke called it “one of the most remarkable fossil discoveries made in the history of human origins research”.

Once the foot bones and leg bone fragments had been found in 1994 and 1997, Clarke sent his assistants Motsumi and Nkwane Molefe into the deep underground cave to search for any possible broken bone surface that might fit with the bones he had discovered in boxes. It has taken a further 20 years since the discovery to excavate and prepare the fossil, a project funded by the Palaeontological Scientific Trust (PAST). Now, Clarke and a team of scholars from France, the US and the UK are conducting a set of further studies on the remains. These are expected to be published over approximately the next year, he says.

Part of the reason the excavation took so long is that the bones had to be cleaned from blocks of a concrete-like rock called breccia. “The process required extremely careful excavation in the dark environment of the cave. Once the upward-facing surfaces of the skeleton’s bones were exposed, the breccia in which their undersides were still embedded had to be carefully undercut and removed in blocks for further cleaning in the lab at Sterkfontein,” said Clarke. The bones, to complicate the process further, are extremely fragile.

When Little Foot was first discovered, there were some questions about her age. Initial dating, in the mid-1990s, placed her at around four million years old; this drew debate. Professor Darryl Granger, who earlier studied Little Foot’s age, later refined the dating method, Clarke told Daily Maverick.

Now, he says, the cosmogenic burial dating method correlates with the age the excavation team originally estimated, which was older than three million years, perhaps 3.5-million. “We see nothing wrong with that date,” he said.

Cosmogenic burial dating involves placing quartz grains on the surface of the rock, which are bombarded by radiation. “This forms the nuclides of beryllium 10 and aluminium 26 in the quartz grains, and when they are buried deeply enough, they begin to decay and don’t absorb any more [of that kind of] radiation. This can be measured by physicists, who then work out the age accordingly,” he explained. He added that the team is “absolutely confident” in the efficacy of the method.

Professor Adam Habib, Vice-Chancellor and Principal of the University of the Witwatersrand, called the research into Little foot a “landmark achievement for the global scientific community and South Africa’s heritage”.

It is not, however, the first time Wits has unveiled a palaeontological surprise this year. Earlier in 2017, Professor Lee Berger announced further details of the ongoing research in the Rising Star caves, reiterating the assertion that Homo Naledi buried their dead and – controversially – arguing the possibility that they may have come into contact with modern man. DM

Photo: ‘The Little Foot’ hominid is on display during the unveiling by Professor Ronald J. Clarke (unseen) and his crew at Wits University in Johannesburg, 06 December 2017. Thought to be 3.7-million years old, the hominid was found 20 years ago but only revealed to the public now. The initial find by Professor Clarke was made at the Sterkfontein Caves near Johannesburg. The recovery of the complete skeleton of the Australopithecus proved extremely difficult as it was completely embedded in concrete-like rock. EPA-EFE/KIM LUDBROOK