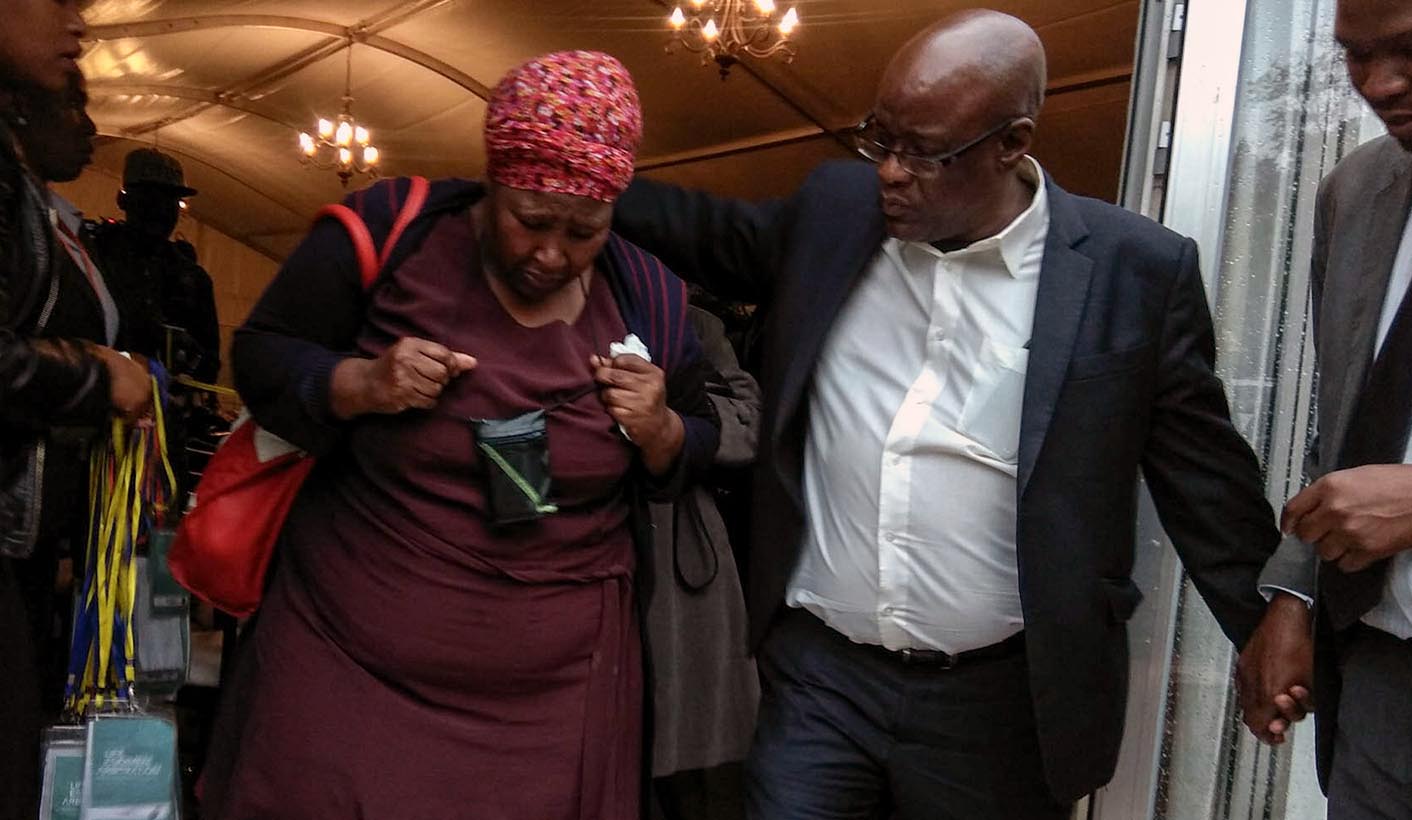 Advocate Adila Hassim had to yell to be heard when the sound of the rain became too much. She had been cross-examining Dr Tiego “Barney” Selebano since Tuesday afternoon and while he’d admitted that the plan to move around 1,700 patients out of Life Esidimeni and into NGOs and community care was wrong, his regrets seemed to be calculated not to incriminate himself.

“What I would like to put to you, Dr Selebano, is that you yourself were not performing your duties diligently,” Hassim yelled over the rain. Selebano, who was almost inaudible, shot back: “It’s your opinion, counsel… I did my best. You could not have done any better.”

The suspended Gauteng health head – who approved the Life Esidimeni plan, ignored repeated warnings, and failed to monitor patients after they were moved – apologised. “God willing”, he said, he wished he’d seen the signs before 143 people died. “Let’s not bring God into it,” said the arbitrator, former Deputy Chief Justice Dikgang Moseneke. “God would never will that 143 people would die.”

In his second day at the arbitration, Selebano attempted to show respect to the families of those who died, but offered confusing and contradictory answers to simple questions on the plan to move the patients, why he ignored warnings, and who was responsible for the fatal project.

Selebano repeated his comments to Health Ombudsman Professor Malegapuru Makgoba in which he took responsibility for what happened under his watch and also admitted that patients died as a result of negligence. The Gauteng government has already accepted negligence on its part. Selebano repeated his claim that as department head he couldn’t have monitored the project closely.

He was repeatedly warned that the project to move patients out of Life Esidimeni would put them in danger. In March 2016, professional psychiatrist associations took the department to court regarding its plan to move some patients to the Takalani Home NGO. It cared for children, but some of the adults being moved there were on medication for hypersexual and aggressive behaviour.

They warned that the move violated an agreement to provide equivalent or better care for Life Esidiemni patients. Selebano signed an affidavit saying the fears were unfounded and that he had committed to providing quality care. Two Life Esidimeni patients were allegedly raped at Takalani and 37 people died.

“That place was a death trap,” said Moseneke, asking why he didn’t act on the warnings and whether former MEC Qedani Mahlangu pressured him. Selebano admitted on Tuesday that the MEC pressured staff to move patients into NGOs. “Why didn’t you open the door of MEC Mahlangu and say ‘I’m not going to authorise this any further’?” asked Moseneke.

“There was no space to differ sharply,” said Selebano. When the health department’s project manager on the Life Esidimeni move expressed his concerns about the plan to Mahlangu, she asked him whether he was a spokesperson for the company. “It’s a difficult culture, very difficult,” said Selebano on how government operates. “It’s a culture of hierarchy, steps.” He wouldn’t implicate Mahlangu directly and later denied he felt she put him under pressure.

In his report on Life Esidimeni, Makgoba cited national Department of Health Director-General Malebona Matsoso, who said provincial department heads must issue NGO licences unless a subordinate has been given written permission to do so. The Gauteng director for mental health, Dr Makgabo Manamela, issued NGOs where Life Esidimeni patients were sent with licences. Makgoba said that was the norm in the province and disputed the claim that it was his responsibility.

After being questioned by Makgoba last November, Selebano signed and backdated new licences for all 27 NGOs to April 2016, even for NGOs he had closed where patients died. He said he was trying to “regularise it”. Hassim said, “It’s called cooking the books.” Selebano said in hindsight he shouldn’t have done it but, “I was not cooking any books. There was no underhand intention here.”

National Health Minister Aaron Motsoaledi called Selebano after it was revealed that 36 Life Esidimeni patients had died and said he must prevent further fatalities. Selebano closed a few NGOs, but didn’t take action on others. When the ombudsman interviewed him in November, he thought around 40 patients had died, whereas 78 patients had passed away.

Still, even when Makgoba told him how many people had died by November, he did not try to verify the number or take action against his staff. Moseneke said a monitoring plan was “project planning 101”.

Selebano denied he was personally negligent and was cagey when asked if his staff were negligent, trying to say he didn’t think so during the height of the project but now he must accept they were. “When people accept accountability, it includes acknowledging the wrongs,” said Moseneke.

The former deputy chief justice repeatedly asked Selebano why the project to move Life Esidimeni patients into NGOs was launched. Selebano said the department was under pressure from the premier’s budgeting team to cut costs.

Despite suggestions that politics or race may have been a factor – the department thought critics were under the influence of the DA or Life Esidimeni, which had a partnership with government dating back to apartheid – Selebano maintained it was only about costs.

However, a government-commissioned report costing R400,000 said Life Esidimeni provided good value for money. Officials saw the report before they terminated the contract. Moseneke questioned why the state couldn’t either buy Life Esidimeni, which was proposed and the department could afford, or put the contract out to tender, but Selebano had no clear answers.

The arbitration will continue on Wednesday and will run for the rest of the week before closing for the year. Mahlangu, Motsoaledi and Gauteng Premier David Makhura will testify in January. DM