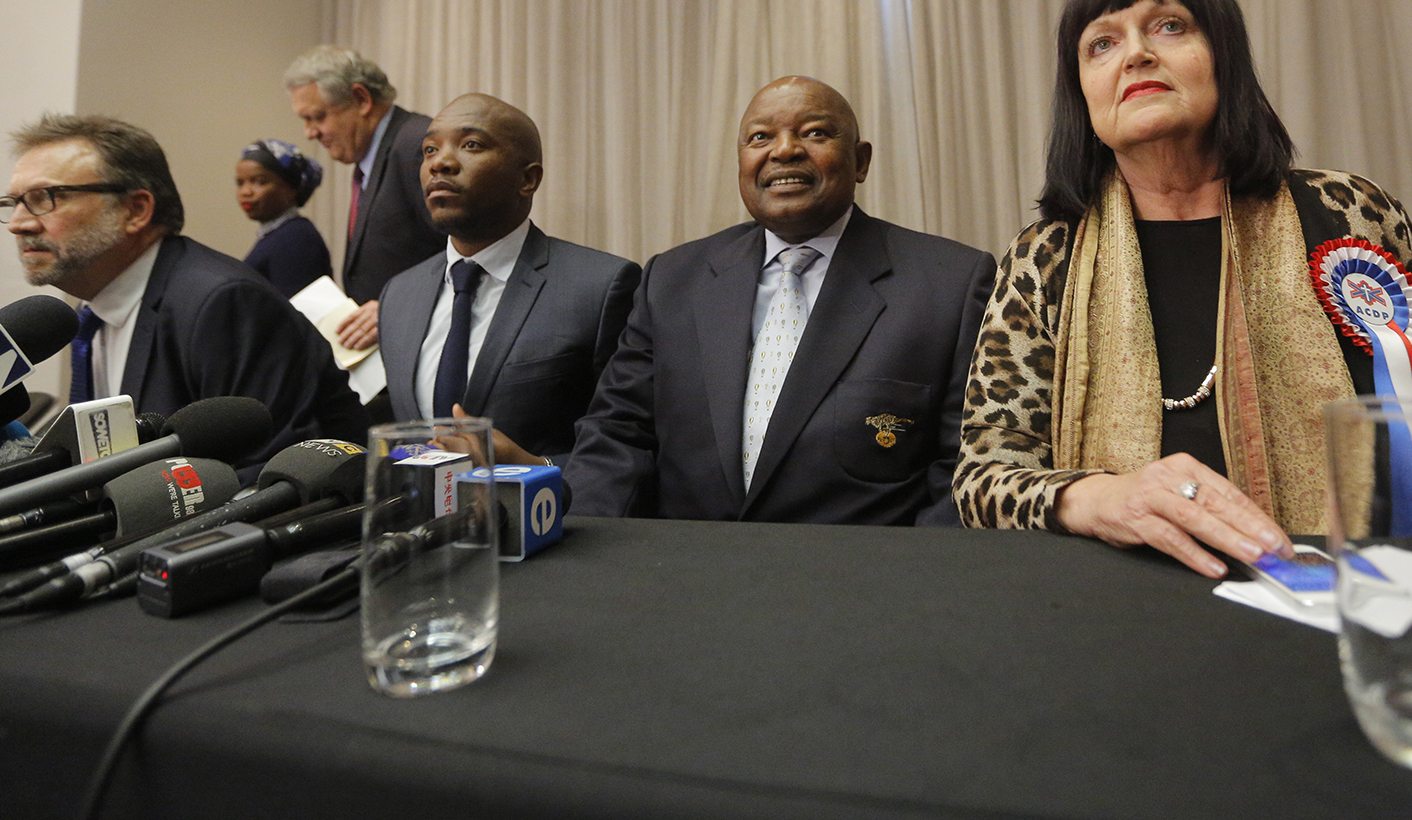 With the notable absence of the Economic Freedom Fighters (EFF) and United Democratic Movement (UDM), coalition parties converged in Johannesburg to take stock of coalition agreements. The parties agreed that coalitions are the future, while acknowledging the challenges. By BHEKI C. SIMELANE.

“Multiparty governance is the way to go. If there were more parties, our political problems would be minimal. Co-operation and respect for one another will enable the coalition to function properly. Multiparty governance is the way to the future, it’s been tested and found to work well despite the challenges,” ACDP leader Rev Kenneth Meshoe said in his opening remarks during the evaluation of the coalition.

The parties present expressed appreciation for one another regarding the manner in which parties had interacted to date.

“We are thrilled with what we have achieved as a bigger formation. We are glad we could find a common vision as parties that we could work on,” Congress of the People (COPE) leader Mosiuoa Lekota said in his opening remarks.

“The coalition is young, there are going to be growth pains,” Leader of the Freedom Front Plus, Dr Pieter Groenewald, said.

“We should never find ourselves in a situation where we say we are disinterested in multiparty democracy. If we formulate a government in 2019, it should be on that premise,” Democratic Alliance (DA) leader Mmusi Maimane said.

The incidents in Mogale City and Nelson Mandela Bay are an indication that the coalition is not without challenges. In Nelson Mandela Bay, instability has prevailed following the conflict between DA mayor Athol Trollip and deputy mayor Mongameli Bobani of the UDM, and has caused animosity within the coalition. Still, the metro succeeded in passing its budget and integrated development plan.

The issue of the functionality of the coalition in Nelson Mandela Bay frequently came up. Coalition leaders expressed their disappointment in Bobani, with Lekota going a step further to say that Bobani wanted the use of blue light vehicles with no regard for whether other officials objected to this. Lekota said this created the impression that a coalition leadership was extravagant.

“He individually votes against the rest of the other coalition partners. This is very peculiar to Nelson Mandela Bay, and we leave it to the South African public to figure it out,” Lekota said.

Listing some of the areas in which the coalition had succeeded, Maimane said the investigative unit established in Johannesburg had uncovered R2-billion worth of corruption. Maimane said the K-9 unit had made 597 arrests, and also announced the purchase of over 28 engines.

In Tshwane, Maimane also announced achievements, including bursaries for 1,800 students. Maimane said the proceeds from the sale of the mayor’s house would be used to build low-cost houses for the needy. The efforts of the coalition had made it possible to issue 2,804 title deeds.

Maimane announced several other achievements in the three municipalities; however, proof of some of the claims has often been challenged in the media.

The Mogale City municipality on Gauteng’s West Rand suffers similar woes as the Nelson Mandela Bay municipality. The Mogale City municipality has not been able to pass its budget or introduce its growth plans for the people of the area in almost a year now. The council’s non-compliance with the Municipal Finance Management Act resulted in the failure to pass the budget and growth plan. A second mayor was dethroned after a vote of no confidence. The two mayors were both from the DA. Former mayor Lynn Pannall was voted in during the initial council meeting but had to vacate office after falling ill. The second mayor, Michael Holenstein, was removed through a vote of no confidence conducted by secret ballot.

Addressing the issue of the EFF, the coalition leaders all shared the same sentiment, that the EFF had its own political ideals and that it was best to engage where everybody shares the same ideals. “There are principles we differ on with the EFF, especially the issue of land,” the FF-Plus’ Groenewald said.

Groenewald added that coalitions the world over have challenges.

Chipping in on the issue of the EFF, Lekota said, “The EFF comes on an issue-by-issue basis, which helps the country because they participate in matters which they are comfortable with. We manage to find common ground.”

Attempting to explain the absence of UDM leader Bantu Holomisa, Maimane said Holomisa was attending to a private matter.

It is well known that the relationship between the DA and UDM is fractured, with the UDM still reeling from the failed vote of no confidence vote on Nelson Mandela Bay mayor Trollip.

The partners committed to make the coalition work beyond 2019. They displayed little doubt in the ANC trying to claw its way back on the lost municipalities, arguing that the ruling party was not capable of self-correction. The ACDP’s Rev Kenneth Meshoe said: “We all have our own values, but agreed not to betray one another. The DA should also honour the agreement.”

“Come 2019, we will work towards building the alternative: a coalition government at national level that represents all South Africans and is committed to fighting corruption, delivering services and creating jobs,” Maimane said.

Maimane noted that as long as partners found commonality and worked together, anything was possible. DM

File Photo: DA leader Mmusi Maimane sits with COPE leader Mosiuoa Lekota and other opposition politicians prior to addressing the media to update the public on coalition talks after the recent local elections, Johannesburg, 17 August 2016. The DA announced that it would enter into political arrangements with other parties including COPE, FF Plus, ACDP, UDM and the IFP. EPA/KIM LUDBROOK