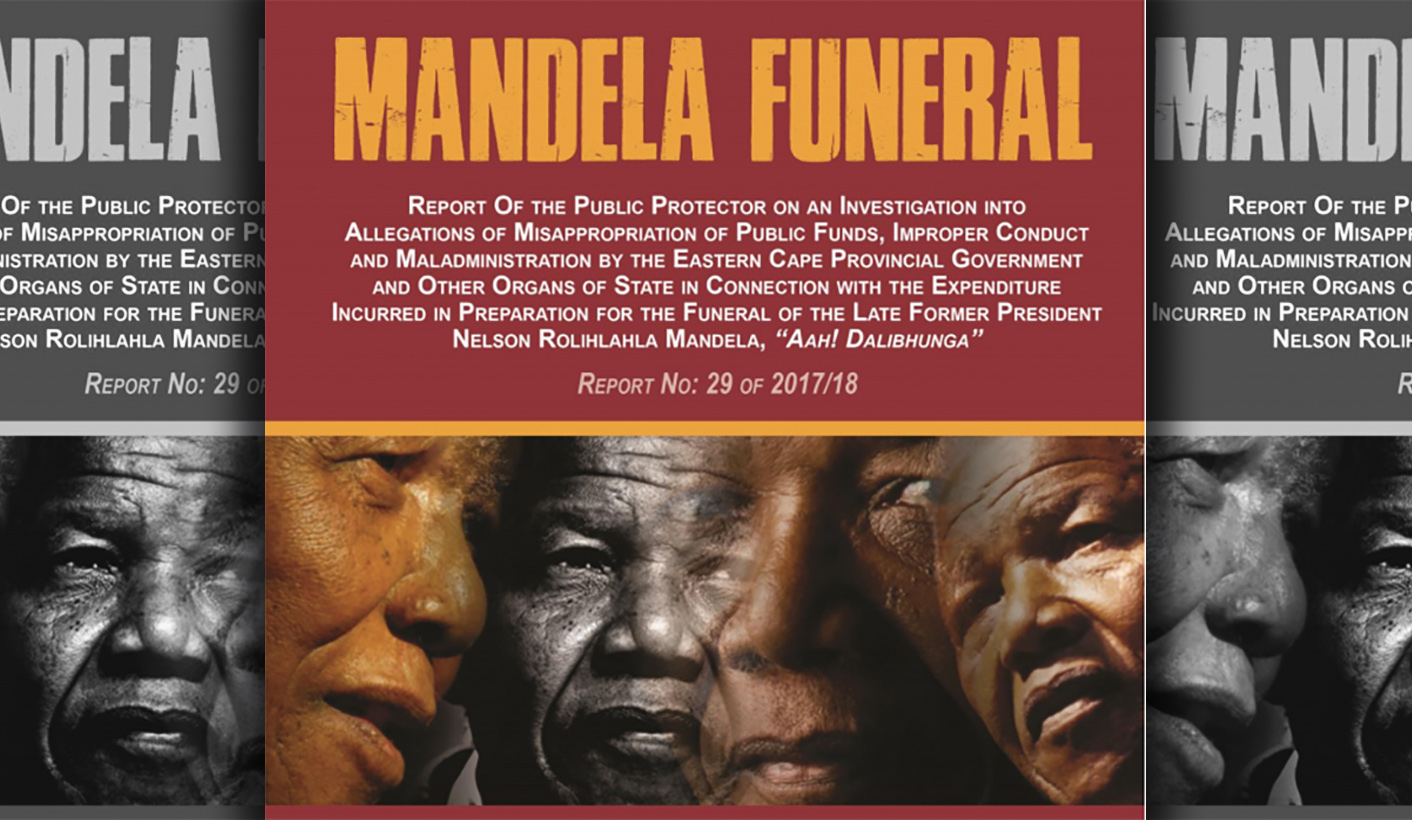 It was supposed to be the final send-off for South Africa’s best-loved son. But for some, the funeral of Nelson Mandela represented just another opportunity to skim public funds. Released on Monday afternoon, the Public Protector’s report into the chaos around Mandela’s funeral offers a depressing reminder that no South African occasion is considered off-limits where graft is concerned. Hundreds of millions of rand that was meant to be used for schooling for the poor was diverted. The release of the report is also likely to be one of the less contentious things that Busisiwe Mkhwebane has done this year. By REBECCA DAVIS.

Nelson Mandela died exactly four years ago on Tuesday. In a perverse form of memorial, Public Protector Busisiwe Mkhwebane chose the same week to release a long-awaited investigation into corruption around Mandela’s funeral.

Mandela’s death was not unexpected. Yet despite this, the lack of planning in his home province for the statesman’s funeral was nothing short of “scary”, Mkhwebane reported.

It beggars belief that at the point when Mandela died, no provision had been made at all within the Eastern Cape provincial budget for his funeral – despite it being known since 2008 that the province would host his send-off, termed Project X in government circles.

The Public Protector’s report paints a disheartening picture of a chaotic situation in the lead-up to Mandela’s funeral. There was no “properly co-ordinated plan for all the different role players in the funeral”, the report finds, and “no operational centre where daily meetings were held”.

The report suggests that the “unauthorised, irregular and fruitless and wasteful expenditure” incurred around the funeral had three main causes. The first was the lack of planning, which meant that funds intended for other purposes in the Eastern Cape had to be hurriedly diverted. The second was the behaviour of unscrupulous service providers, who billed exorbitant amounts for products which may never even have been delivered.

And the third was the corruption stemming from within government itself, ranging from inappropriate relationships with certain service providers to the misuse of public funds for ANC activities.

It took less than a month for concerns over the bill for Mandela’s funeral, held in December 2013, to be brought to then-Public Protector Thuli Madonsela. Reports of R6-million paid to a taxi operator to ferry mourners around East London during funeral events were the first snowballs of what would become an avalanche.

Eastern Cape newspaper the Daily Dispatch deserves much of the credit for blowing open the full extent of wrongful expenditure on the Mandela funeral, detailing in a March 2014 article how money taken from a R330-million provincial infrastructure fund was spent, among other things, on takeaways and T-shirts.

It was also the Daily Dispatch which broke the story of how R250,000 of taxpayers’ money was deposited around the funeral in the personal bank account of then-Eastern Cape MEC for Planning and Treasury, Phumulo Masualle.

The Public Protector’s report has now confirmed the accuracy of the Dispatch’s reporting in this regard.

In reality, the Public Protector’s report states, the expenditure did not meet the necessary requirements. Accordingly, Mbina-Mthembu’s proposal was “irrational and unlawful”.

It was also Mbina-Mthembu who ordered government officials to deviate from normal procurement processes due to the urgency of the situation. Mbina-Mthembu also authorised the purchase of takeaways for funeral marshals from McDonalds and KFC to the tune of almost R800,000 due to “the risk of food poisoning” and “the unavailability of bed space in Mthatha hospitals”.

When it came to paying for transport and logistics, Mbina-Mthembu openly expressed concern that government was being “taken for a ride” in a memo but nonetheless urged that payments to the relevant service providers be made fast.

“I get the sense that some people are taking chances but we are in trouble as a province,” Mbina-Mthembu wrote. “Let us stand together now, this will pass too.”

The Public Protector concluded that the effect of this was that “the procurement of goods and services were chaotic, and completely in violation of the relevant provisions of the PFMA and Treasury instructions”.

It was Mbina-Mthembu who authorised a transfer of R250,000 of provincial government funds into Phumulo Masualle’s bank account to allow him to cover “the costs relating to meetings and entertainment for dignitaries coming to attend the funeral”. When Masualle objected, the amount was withdrawn and loaded on to a special debit card for this use. This was still a violation of the Ministerial Handbook, the PFMA and Treasury regulations.

Payments were also made to service providers who never delivered: including for T-shirts, and materials and artists for a Qunu night vigil which never happened.

One of the most alarming findings of the report is the way in which public funds were used for ANC activities and materials, including the procurement of a public address system for the ANC Women’s League programme. In addition, the Public Protector found that Buffalo City Municipality councillors put “the interests of the ANC” ahead of those of the municipality.

This finding will no doubt be jumped on by opposition politicians who have repeatedly expressed concern about the use of state funds for ANC campaigning: an issue which has come to the fore again recently amid the parliamentary discussions on the draft Political Party Funding Bill.

It is clear that much of the work on the investigation into Mandela’s funeral was undertaken by former Public Protector Thuli Madonsela, who is quoted during transcripts of interviews.

But there are also some interesting aspects of the wording of the Public Protector’s report, given the controversy that Busisiwe Mkhwebane has faced this year. One is an insistence that the Public Protector’s power to determine remedial action in the cases she investigates is “wide but certainly not unfettered”. This follows the concern over Mkhwebane’s instruction to Parliament this year to amend the mandate of the Reserve Bank following her investigation into apartheid bank bailouts: a move which caused alarm over the apparent overreach of her powers.

This time around, there is nothing that will raise eyebrows. The remedial action recommended by the Public Protector in this instance amounts to further investigation: by the Special Investigating Unit, the Eastern Cape provincial treasury and the Municipal Council of the Buffalo City Municipality.

It is a dark irony that Mandela’s passing saw “money intended to alleviate the plight of the poorest of the poor” spent on a state funeral. The money diverted by the Eastern Cape government was intended to be used in part for essential work on schools in the province.

Mkhwebane recommends that a similar situation should be avoided at state funerals in the future “by ensuring that proper plans are made in advance, funds are accordingly appropriated and the activities of everyone involved is properly co-ordinated and monitored”.

It’s unlikely that South Africa will ever see a funeral on the scale of Mandela’s again, however – making it all the more poignant that those involved couldn’t get it right when it mattered most. DM