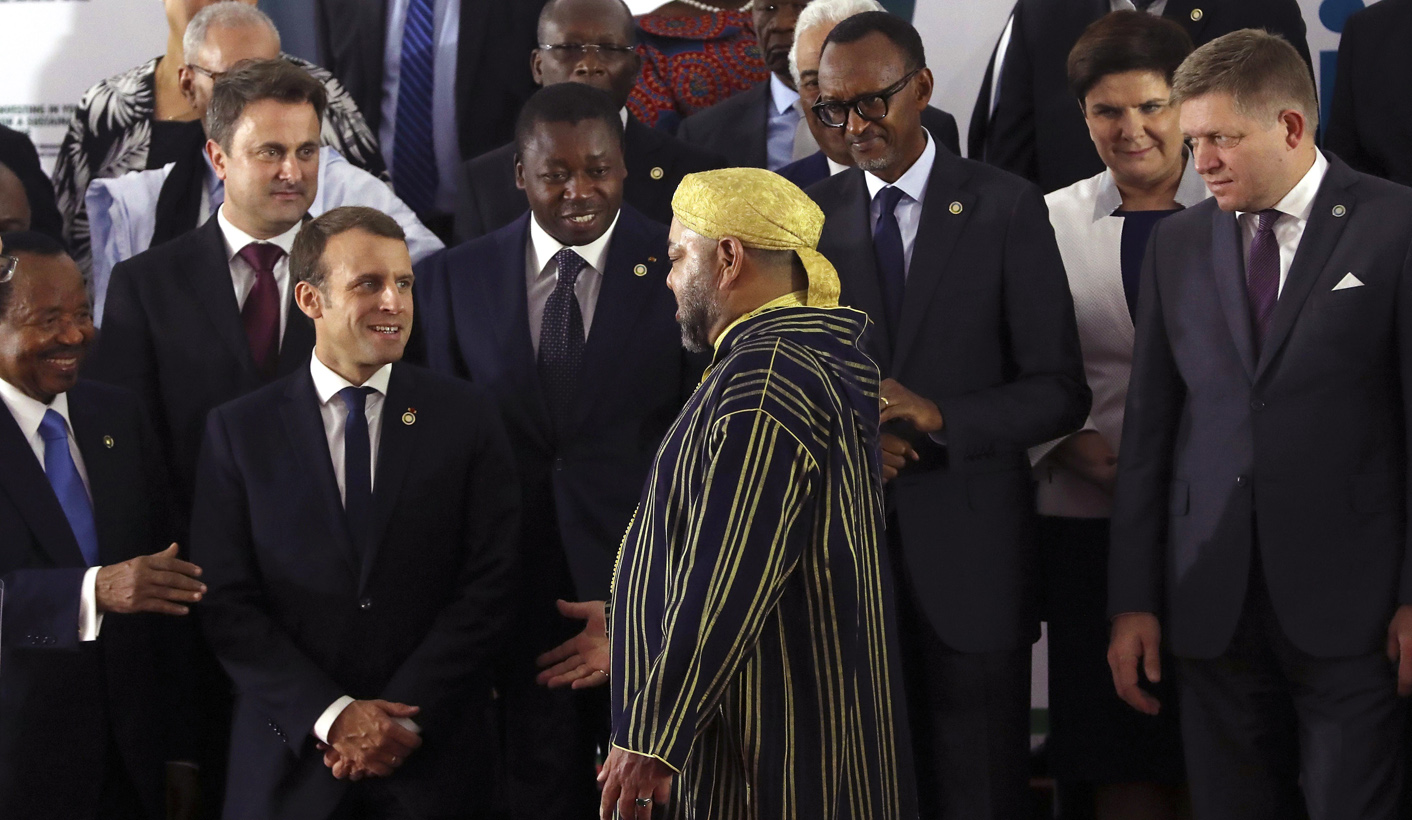 The African Union, the European Union and the United Nations have agreed to establish a joint task force to tackle the scourge of modern slavery which has been revealed by video images of African migrants being auctioned as slaves in Libya. By PETER FABRICIUS.

Slavery has emerged as the dominant topic at the African Union-European Union summit which started in Abidjan on Wednesday. At the opening ceremony every single leader condemned the practice. It has become an emblem of the wider issue of African migration to Europe which was already one of the main themes of the summit and of Africa-Europe relations in general.

The AU announced that United Nations Secretary General, Antonio Guterres, Chairperson of the African Union Commission, Moussa Faki Mahamat, President of the European Commission, Jean-Claude Juncker, and the EU’s High Representative/Vice President Federica Mogherini, had met on the margins of the summit and agreed to form a joint EU-AU-UN Task Force to save and protect lives of migrants and refugees along the migratory routes and in particular inside Libya.

It would address ways of accelerating the assisted voluntary return of migrants to their home countries and the resettlement of those in need of international protection.

The task force would build on, expand and accelerate the ongoing work done by countries of origin, and the International Organisation for Migration (IOM), a UN agency, with EU funding, which had enabled the voluntary return to their countries of origin of 13,000 migrants since January.

“The work of the Task Force will be closely co-ordinated with the Libyan authorities and be part of the overall joint work that the African Union, the European Union and the United Nations will intensify to dismantle traffickers and criminal networks and to offer opportunities of development and stability to countries of origin and transit, tackling root causes of migration,” the AU said.

“The United Nations, the African Union and the European Union agreed to upgrade in a systematic manner their trilateral co-operation and to meet on a regular basis at the highest political level, notably in the margins of the UN General Assembly.”

President Jacob Zuma joined many other leaders at the summit in condemning the slavery in Libya, at the summit. He called for the international community to strongly support the Libyan government in its addressing of slavery.

However, the Libyan government itself has been criticised for attempting to play down the issue and calling for a summit declaration which condemns modern slavery in general without mentioning Libya.

It was not clear yet  on Thursday  what the wording would eventually be.

AU Commission chair Moussa Faki said the international community had to find a solution to the root causes of this “degrading” and “humiliating” phenomenon. He had earlier urged swift action to identify all perpetrators and accomplices and had welcomed the Libyan government’s announcement that it would investigate the auctions. He had also urged Libya  to improve the conditions of African migrants on its territory.

Faki also asked the African Commission on Human and Peoples’ Rights urgently to launch an investigation and said he would dispatch an envoy to  Libya  to agree on practical steps in support of the measures announced by the Libyan authorities and to submit its conclusions as soon as possible to ensure timely follow-up and action.

The Chairperson of the commission also intends to dispatch an envoy to Libya for consultations with the government of Libya and other stakeholders, to agree on practical steps in support of efforts to address the plight of the African migrants in  Libya.

President of the European Council Donald Tusk said about the migration and slavery reports in  Libya  that “the worst we can do is to start the blame game. What we need now are common solutions to allow people to live in dignity. Libya needs help from AU and EU, not condemnation.”

Tusk’s remarks about avoiding the blame game appear to allude to the criticism among many African governments that the EU is partly to blame for the slavery because it is sending many African migrants back home and exposing them to exploitation.

UN Secretary-General António Guterres also took a positive approach, saying the Libyan slave auctions presented a challenge to enhanced co-operation in the international community. All countries were entitled to manage borders in a responsible and sovereign manner, but also had an obligation to mind international humanitarian law.

He also acknowledged that the two continents would be unable to manage the flow of irregular migration unless they increased the flow of orderly – legal – migration from Africa to Europe.

The slavery controversy is a dramatic and extreme manifestation of the wider problem of illegal migration which has bedevilled relations between the two continents for the last few years. Libya has become the epicentre of this issue because the country fell into chaos and lawlessness after President Muammar Gaddafi was toppled by rebels – with the help of Nato-led military forces.

Since then the country has become a launching pad for tens of thousands of Africans to attempt the crossing to Europe across the Mediterranean, often in unseaworthy boats. Thousands have drowned.

The draft declaration which is to be adopted at the summit on Thursday commits both continents to greater co-operation towards “safe, orderly and regular” migration, including “strong political commitments to address the root causes of irregular migration… while respecting international law and human rights obligations… to maximise the development potential for both Africa and Europe.”

The declaration also stresses that more needs to be done to increase regular (legal) migration, including labour migration and greater migration of entrepreneurs, students and researchers.

However, officials from both sides at first struggled to agree on acceptable wording on the return of illegal African migrants from Europe. The EU has a programme which it says has returned in total about 25,000 Africans who are in “difficult situations” in Europe, including packages to reintegrate them into their home countries.

However, the draft declaration which emerged from a meeting of officials from both sides suggested that the two continents had not initially managed to reach agreement on whether or not this repatriation of illegal migrants should be voluntary.

Ministers from both sides seemed to have resolved the issue as the AU statement on the mandate of the joint UN-EU-AU task force made clear that repatriations would be voluntary. DM

Photo: French President Emmanuel Macron (2-L) and Mohammed VI (C), the King of Morocco speak ahead of a family picture at the 5th African Union-European Union (AU-EU) summit in Abidjan, Ivory Coast, 29 November 2017. The summit aims to improve cooperation on issues such as migration and development. EPA-EFE/BALLESTEROS