By-elections: SACP goes it alone in Metsimaholo as party and alliance’s future contested 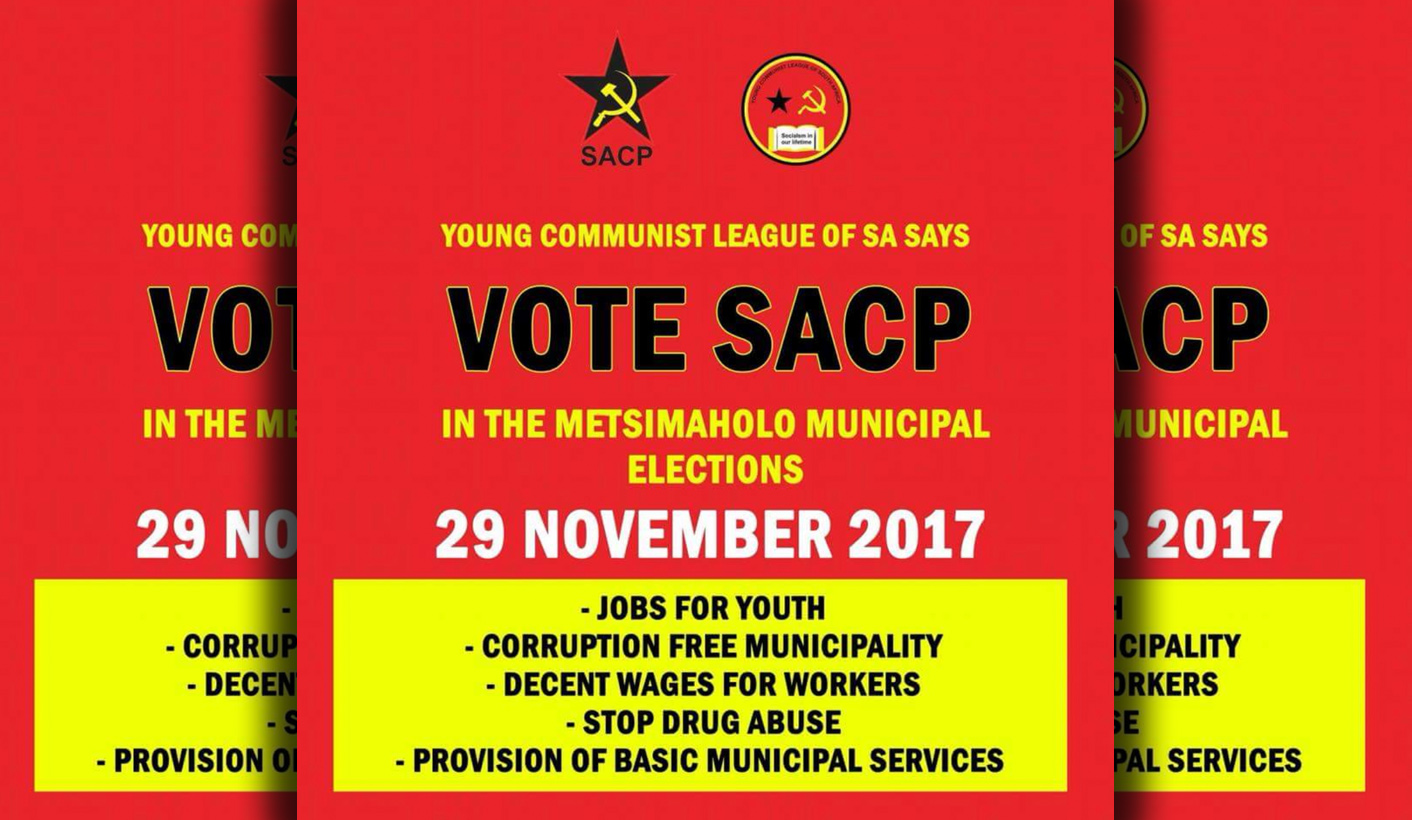 The SACP will on Wednesday contest elections independently for the first time, a sign of a broken alliance. The results could signal where our politics are headed. By GREG NICOLSON.

At its July congress, the SACP resolved, in communist parlance, to consider contesting elections alone:

“After considerable debate at Congress, we have resolved that while the SACP will certainly contest elections, the exact modality in which we do so needs to be determined by way of a concrete analysis of the concrete reality and through the process of active engagement with worker and progressive formations.”

The party opened a space to contest elections independently and on Wednesday will take on its alliance partner the ANC in the Free State’s Metsimaholo by-elections. It’s a historical shift for the SACP, which will discuss and adopt a road map to contesting elections this weekend at an augmented Central Committee meeting.

SACP spokesperson Alex Mashilo said specific conditions in Metsimaholo and the failure of the ANC to engage in meaningful discussion on reconfiguration of the alliance led the party to contest the elections. He cited the alliance election slogan, “Working together, we can do more”.

“It ended on the day of voting,” said Mashilo. Elected ANC leaders had immediately sidelined their colleagues.

Like Mogale City and to a lesser extent Nelson Mandela Bay, Metsimaholo symbolises the pitfalls of coalition governments. Metsimaholo Community Association (MCA) leader Sello Hlasa was elected mayor in coalition with the Democratic Alliance and Freedom Front Plus, with support from the Economic Freedom Fighters, after last year’s local government elections. However, Hlasa favoured the ANC and the council was dissolved.

The SACP says it was contacted by community members with particular gripes who encouraged it to contest elections. In 2014, the ANC-led municipality dismissed 320 workers after a strike. The SACP says the Red Ants were recruited to prevent them from returning to work and they were pressured to cash in their pensions by the municipality to help them cover their debts while they weren’t being paid.

“Those workers were replaced by tenders,” said Mashilo. He said their jobs were outsourced at a greater cost and service delivery was negatively impacted. The SACP intervened on behalf of the employees but their calls to reinstate them were ignored. When the SACP announced it would contest elections, the workers were reinstated, but around 30 others were then excluded based on their political affiliation, he added. The SACP felt it couldn’t campaign for the party which had ignored the workers and the community.

“The ballot is one of the terrains of struggle to challenge the problems of service delivery,” said Mashilo. The SACP has long been calling for a reconfiguration of the alliance, which includes the ANC, Cosatu and Sanco. “The alliance has to be centred on internal democracy.”

He said arms of government led by the ANC could not make unilateral decisions without consulting its alliance partners, nor could appointments be made solely on the basis of executive prerogative. President Jacob Zuma, in two recent Cabinet reshuffles, failed to consult or hardly consulted alliance partners. In October he axed SACP General Secretary Blade Nzimande as higher education and training minister.

Mashilo said there were last-minute attempts to get the SACP to reconsider, but “the intervention was too little, too late”. The Free State ANC had repeatedly said it was unavailable to meet for an alliance political council meeting, bringing all partners together, until the SACP said it would contest elections.

A national-level alliance political council meeting was hosted in Metsimaholo last week, with Zuma reportedly flying in by helicopter, but the SACP maintains it is being used to campaign for the ANC and is discarded between elections.

SACP Free State communications officer Phillip Kganyago wrote recently, “It would clearly be unprincipled and unjustifiable to expect the SACP, given what has been happening in Metsimaholo, to support the continuation of the factional, divisive and disastrous decisions and behaviour prevailing in the region and province. Neither is it fair to expect the SACP to mobilise workers who were dismissed from municipal work politically and neglected communities to campaign for the victory of the very same forces, clothed in the name of the ANC-led government, responsible for their misery.”

Mashilo said the SACP hasn’t set targets for the by-election, saying it’s more about principles. The decision to contest was based on a call from the community. Metsimaholo is likely to require a coalition to form a government and Mashilo said the SACP would first consult the communities and discuss the matter at the augmented Central Committee, which will include leaders from across the country, before deciding what to do with any seats it wins.

The augmented Central Committee meeting has also been mandated to adopt a more permanent policy on contesting elections. “That road map will decide the future,” said Mashilo.

ANC national communications manager Khusela Sangoni said the party was disappointed and it was unfortunate that the SACP had decided to contest elections independently. She said the ANC was committed to engagement:

“We have no doubt that we will find each other as the alliance.”

She said there is still no clear definition of what reconfiguring the alliance, in practical terms, means, but there was a commitment to meet as soon as possible, although no dates have been set.

Professor Susan Booysen from Wits said the SACP has been talking about contesting independent elections since the late 1990s:

“It’s been very long in the coming but it is a profound statement on the state of disrepair in the alliance.”

She said the SACP has taken a “big and quite brave step” as it has been fused to the ANC and has for years sacrificed its own policies for the ANC.

Booysen said the SACP had pinned its hopes on Zuma’s 2007 election as ANC leader as a saviour of the left, but he has sidelined his alliance partners and has replaced their support with that from the Premier League and ANC Youth League:

“Much of this misfortune that has befallen on the SACP in the last decade is of their own making.”

She believed the SACP might pose the biggest threat to the EFF. Both parties’ supporters are likely to be disaffected ANC voters who don’t want to vote for the DA because of either its policies or the belief that it favours whites. The EFF will probably appeal to younger voters while the SACP could appeal to older voters. “It is really, really going to be an important result and contest because it could show voting patterns in the future.”

The EFF on Tuesday said an Independent Electoral Commission official was dismissed after the party complained she had violated procedures during special voting, which allows people to vote a day before elections. The SACP has claimed on its official Twitter account that over 1,000 people submitted to vote were actually deceased and others included people who had moved out of the area. DM